My most interesting arthropod photos of the year 2013

At his Scientific American blog, Alex Wild is curating a list of everyone's best science/nature photos from the year 2013.
I changed it to most interesting, making clear (to myself) that I wasn't looking for just the prettiest pictures. I didn't really remember a favorite photo that I took this year. But as always I remember the favorite that got away!
2013 was a great entomological year for me including a trip to Costa Rica in May, several three-to-four-day tours with clients into the sky islands and to the Mogollon Rim, the huge BugGuide meeting that I organized at the Santa Rita Research Range, half a dozen invited talks with black lighting at very nice locations, two bug parties with entomologists from all over the world and finally a biodiversity survey of two Sonora, Mexico Ranchos with a group of great biologists for the Sky Island Alliance.
I enjoyed searching through my 2013 flickr images that brought back a lot of fond memories. Of course I got hooked and spent much too long staring at thousands of photos organized in flickr's neat nesting system of sets and collections.
So here are twelve photos, in chronological, if not monthly sequence: 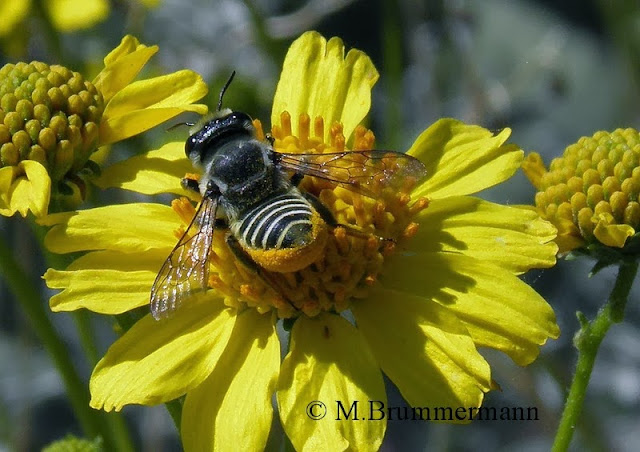 Megachile parallela (Leafcutter Bee) on Brittle bush in February. I like it because she is showing off the pollen load under her belly so nicely. 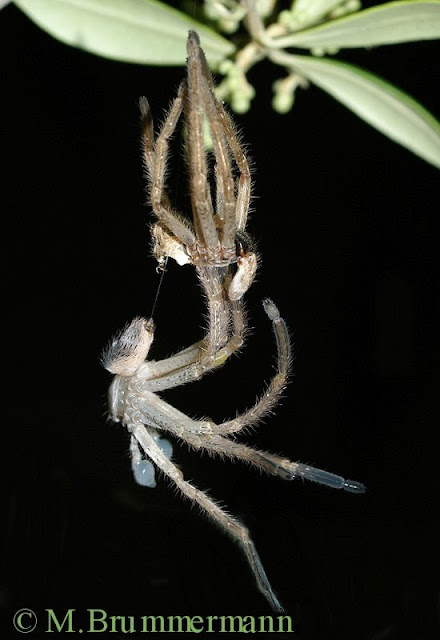 I had the chance to follow the molt of this male Olios giganteus (Giant Crab Spider) in our neighbor's olive tree. I posted the series of photos to my blog. The spider currently still lives in the same hollow tree post, nearly 10 months later. 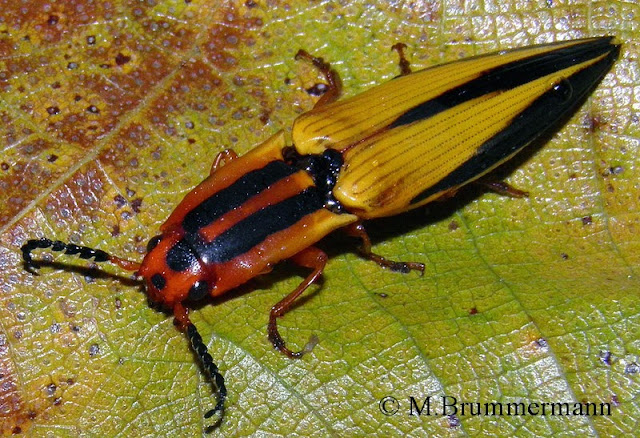 This click beetle in the genus Semiotus did get his portrait in for being pretty, and the leaf was chosen as a nice background to show him off. But: this is one of the photos I took in early May in Guanacaste, Costa Rica. We tend to take for granted that tropical species are so much more colorful than their relatives from temperate zones but the question remains why? 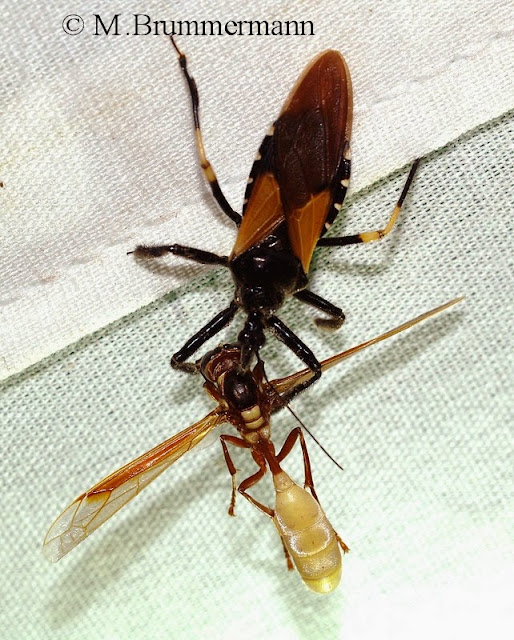 Apiomerus barrocoloradoi (Bee Assassin) preying on Apoica pallens (night-active Vespid). Initially I was very proud that during my short visit to Costa Rica I found this only very recently described Assassin Bug. It turns out that these bugs were long known but had so far eluded description as one species because they are so  very variable in coloration. 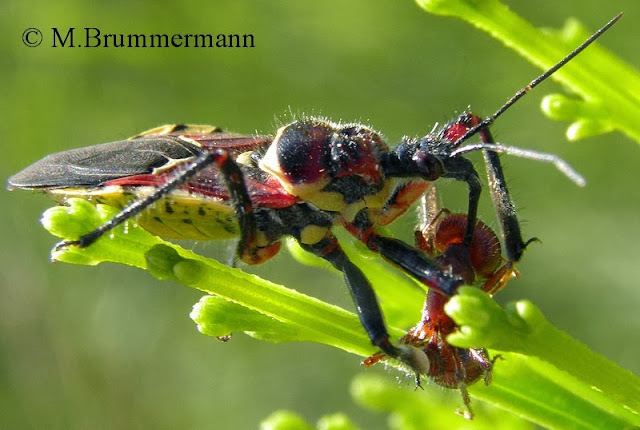 And 'Ausnahmen bestaetigen die Regel': our own Arizona Bee Assassin Apiomerus flavivestris is more colorful than her tropical brother. But she made my list because of the pray she tackled here: a Pogomyrmex sp. Harvester Ant. Their sting is the worst I have experienced so far (I stayed respectfully clear of the Costa Rican Bullet Ants) It is said that Arizona would be completely uninhabitable if our Pogos where the size of Jackrabbits. I'd say that I'd move if they were the size of packrats. 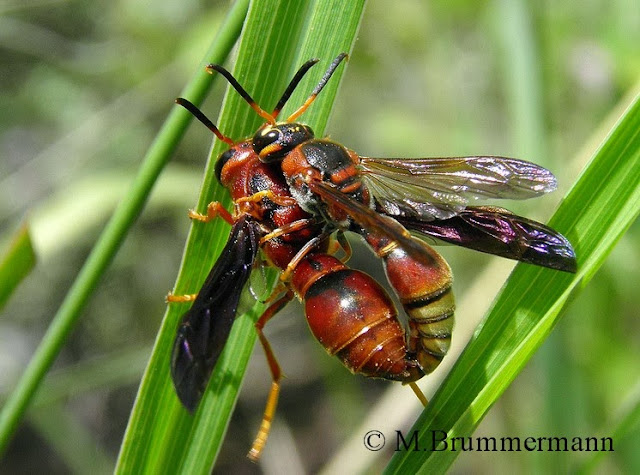 For this shot I climbed down a steep embankment at Copper Canyon in Cochise County, and while I didn't loose my footing and roll down into the Mexican flatland, I did bang my little Olympus point-and-shoot against a rock and nicked the lens. James M. Carpenter  identified the pair as Parazumia tolteca. 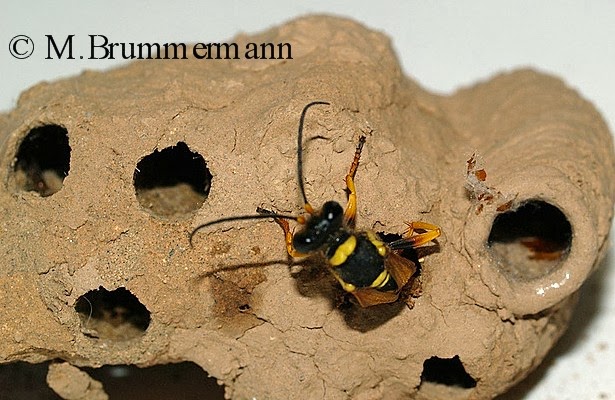 I had watched the progress (or no changes rather) of this Sceliphron caementarium (Black and Yellow Mud Dauber) nest for months when finally little moist spots indicated activity. By the time I had my camera set up, I caught just about the last young wasps hatching. Here is the blog, complete with video. 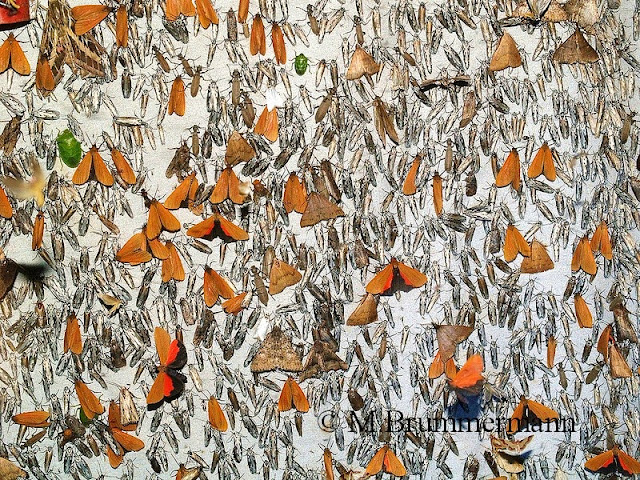 When light-trapping insects, it's not always quality that impresses. During this night in Peppersauce Canyon on the north side of the Catalina Mountains the moths covered the sheet so densely that nothing new could land. The air was so saturated with scales from their wings that we could hardly breathe. 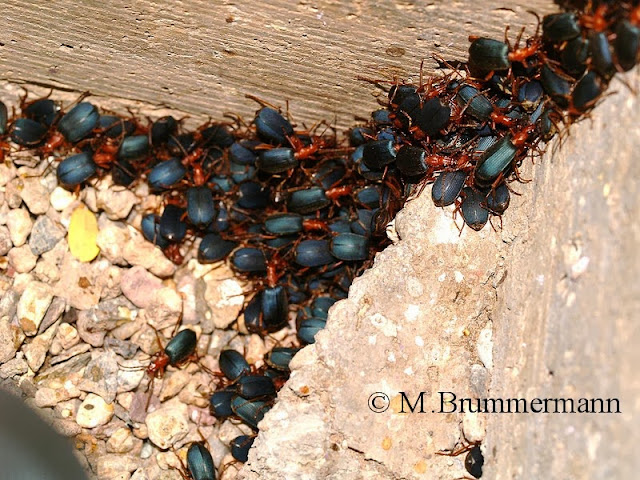 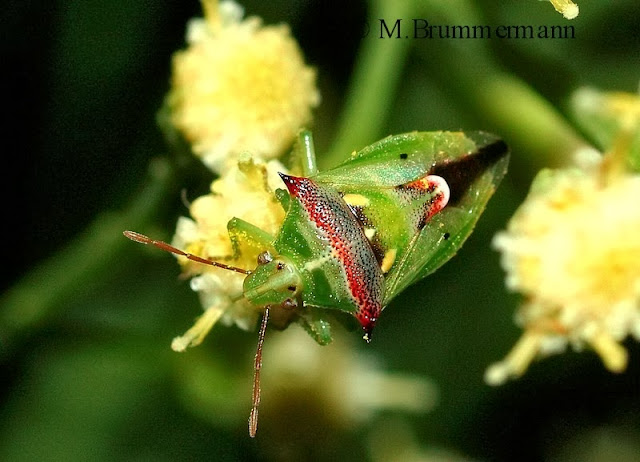 Tylospilus acutissimus is a predatory stink bug. He got chosen because he is pretty, but also as a representative of the last great insect-photography opportunity of  the year, which comes around with the bloom of the Desert Broom Bushes in early November. 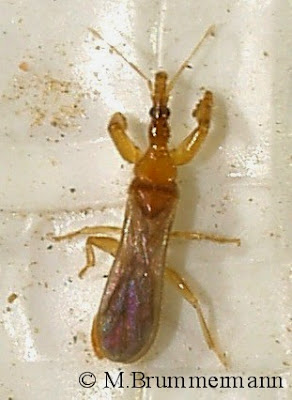 On a Sonora Mexico trip for the Sky Island Alliance, I found this tiny (3mm) bug in the genus Systelloderes at my light. It belongs to the family of the Unique-headed Bugs (Enicocephalidae), which occurs around the world, but the majority of species remains undescribed. 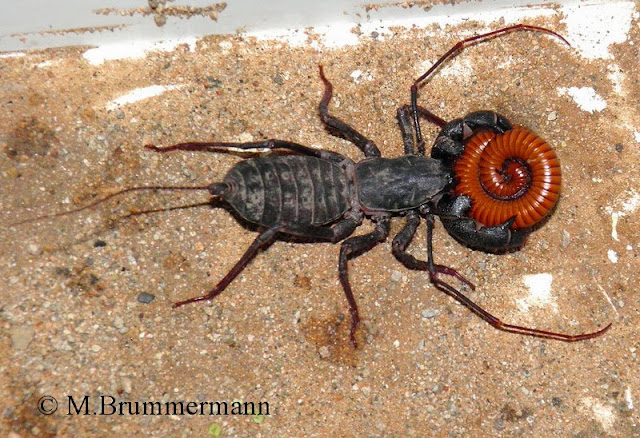 I usually don't set up photo opportunities by staging encounters of subjects that may or may not meet in natural surroundings or harm each other. In this case the millipede had been left in the sandbox from a previous photo shoot by accident when I introduced the Giant Vinegaroon (Mastigoproctus giganteus). But she tackled the millipede immediately, and although it managed to wiggle away once, in the end all that was left were the hard segmental rings of the exoskeleton with their pairs of legs and an even fatter vinegaroon.
Posted by Margarethe Brummermann at 11:54 AM