Caracaras of the Santa Cruz Flats


I liked those stately birds even as a child in Germany. Our zoo in Dortmund had a few that were walking freely (though probably with wing feathers clipped) among the visitors. Their dignified but curious demeanor appealed much more than the stately beauty of the peacocks or the aggressive gobbling of the turkeys that were also strutting around.
Last May in Costa Rica I saw Caracaras a couple of times in the wild, but we were always on our way to something more interesting, rare, or otherwise attractive, so I never got a good look...and while they were more common in Costa Rica, I also hoped that I would eventually see them in Arizona. Because, even though wikipedia and some other sources mention only US populations in Florida and Texas, I knew that a few pairs breed regularly in the area around Sells, Arizona, on the Tohono O'odam Nation. Access there can be difficult, though

Yesterday my friend Ned Harris took me to the Santa Cruz Flats west of Picacho Peak where this year a group of Caracaras is wintering in the fields. He has seen as many as 50 there at a time. The wide open area is used to grow cotton, alfalfa  and sorghum. The fine clay soil is the source of dust storms that often cause deadly accidents in Interstate 10, and we got our share of the dust when trucks loaded with huge cotton bails raced by on dirt roads.

Pecan trees grow along the roads, but they are neglected and suffer from lack of irrigation. For the Caracaras the bare top branches offered a perch which made for some unusual photos because these birds can more often be seen walking busily on the ground. 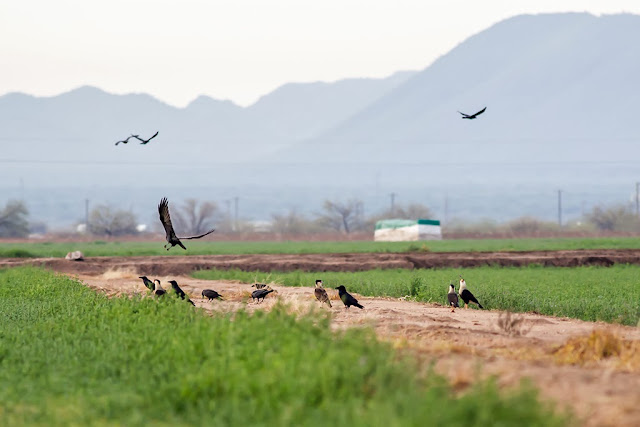 We found two groups of about 5 birds on a berm where they were feeding in the company of a bunch of ravens.
The birds seemed social. They were not just feeding close to each other, they interacted. They watched and followed each other on the ground, and stole from each other. When one left, the others soon joined him. They are carrion eaters and, like vultures, probably profit from strength in numbers when they have to compete with other predators at a large carcass. Phylogenetically, they are now grouped with the true Falcons in the family Falconiformes, but they have little in common with them. In behavior and even appearance they reminded me much more of the small Egyptian Vultures that I often watched in Southern Europe.

Yesterday it was cloudy and cool, and most raptors were on the ground or perched with no soaring-thermals to be found. The Caracaras and some Ravens were walking on berms between irrigated cotton and alfalfa patches. While the ravens poked at the ground with their beaks, the caracaras used their strong yellow legs and feet to scratch and turn over whole chunks of vegetation and soil that may have been loosened by a plow. Ever now and then a caracara got lucky: he reached out and grabbed something with one foot and then elegantly lifted the morsel to his beak to eat it. I do not know of any other birds that eats like that except parrots....Does the gawky African grassland raptor, the Secretary,  do something like that? I approached three Caracaras that were busily scratching and digging to see what they were catching, but they kept slowly moving out of range. They didn't fly up, they just kept walking and searching. When I checked the soil that the birds had turned I thought I saw holes stemming from grubs or earthworms. I tried to get some video, but I had nothing to rest my camera on, so the tele-lens video turned out awfully jumpy.
I went back today when the light was better, but I only saw three caracaras on the ground and even they took off soon...later I saw them soaring high above. 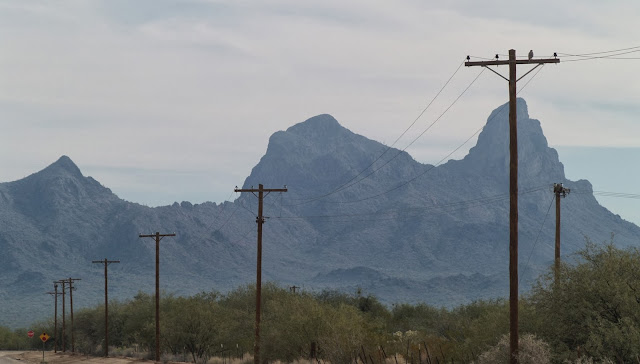 On the wide open Santa Cruz flats, telephone posts are the most appreciated perches for most raptors other than Caracaras and Northern Harriers. We spotted amazing numbers of Kestrels, several Merlins (not on the poles or wires), at least three color morphs of Red-tails, a Cooper's, a Ferruginous Hawk and several Prairie Falcons.

Posted by Margarethe Brummermann at 5:25 PM