Posted by Margarethe Brummermann at 11:36 AM 4 comments:

Cattleman's Breakfast at the Stockyard Cafe - our neighbors invited us to experience the true Arizona. It smelled a little of cows and mostly of clean hay and straw - this is not one of the feed lots where cattle is fattened before it is slaughtered and stands for weeks in its own muck (I know why I don't eat beef). 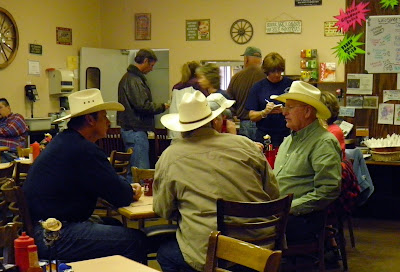 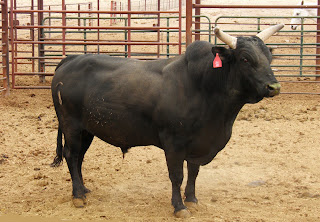 The cattle in the holding pens before the auction could have provided the German Brothers Heck with all the genetic material they needed in their misguided attempt to recreate the extinct 'Auerochs', ancestor of most modern breeds of cattle. 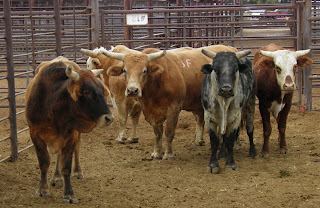 There were cattle descending from French  Spanish, English, German, Indian, and African breeds, even some that seemed to have the brooding profile of the American Bison. They were mostly munching peacefully at long troughs. 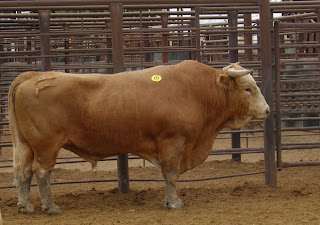 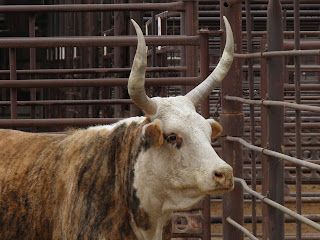 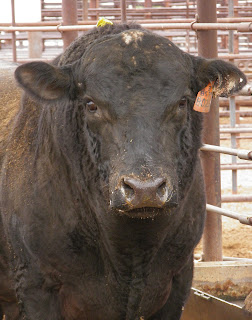 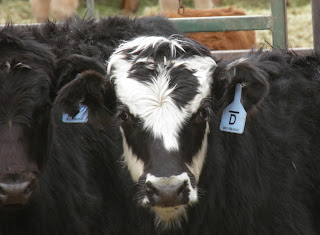 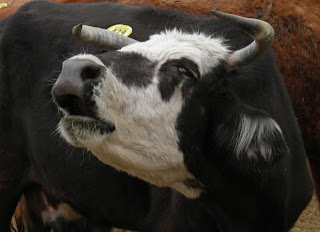 A few cowboys where milling around,  skillfully maneuvering their horses while opening and closing the hundreds of gates to move groups of cattle quietly from corral to corral  into a narrow, rotating  system of wall and gates that led across the scales and  into the auctioning arena. 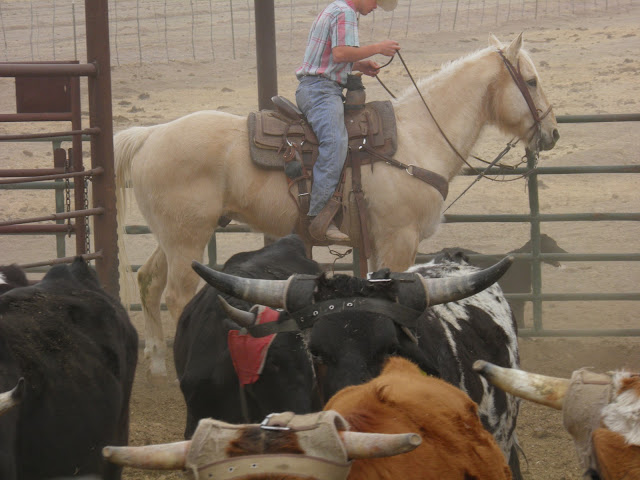 Inside rows of seats rising towards the back reminded me of a university auditorium (they didn't look comfortable enough for a movie theater). By the time the auction began, most of the seats were taken, and mostly by ranching people. Not many tourists here.

The auctioneer kept up a continuous  flow of repetitive syllables, interspersing it with few understandable words. Still, after a while I was absorbing the information about the shown animals as well as the bidding steps without being able to consciously understand anything. It turned out that some of my American-born companions understood even less. 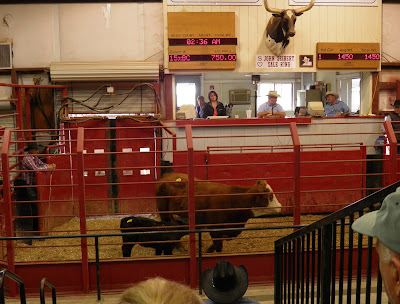 I had told my colleagues at the entomology department that I couldn't come to work today because I was buying a donkey for our planned bug-collecting trips into the Rincon Mountains.  I did actually find two very nice looking donkeys at the auction. But, to Randy's and our neighbors' relief, they turned out to be the resident mascots and not for sale. 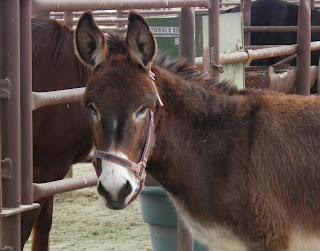 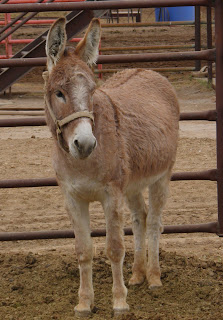 So Cody, hop right back into the car. You don't have to make room - this time 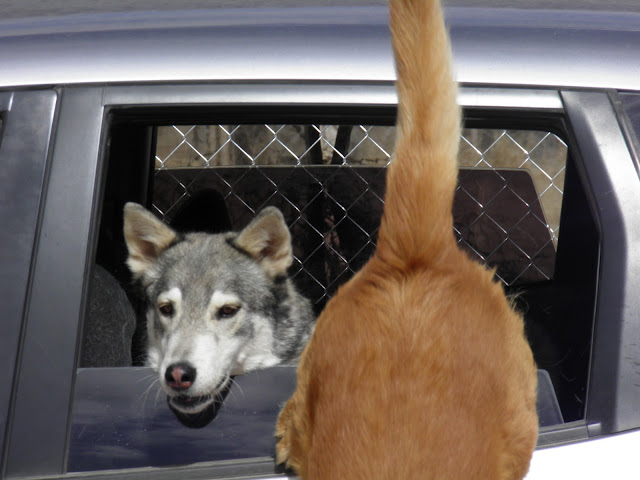 Posted by Margarethe Brummermann at 4:55 PM No comments: 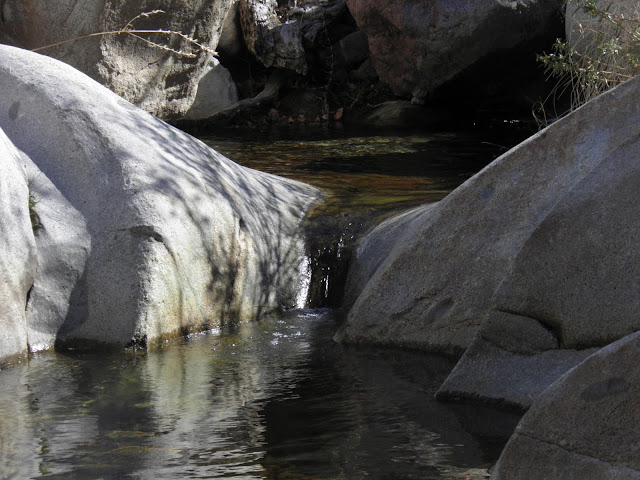 After the recent cold spell and snow fall, Madera creek is rushing with chilly snow melt from Mnt Wrightston and Mnt Hopkins. Under these conditions bird watching is still much more rewarding than bug hunting. 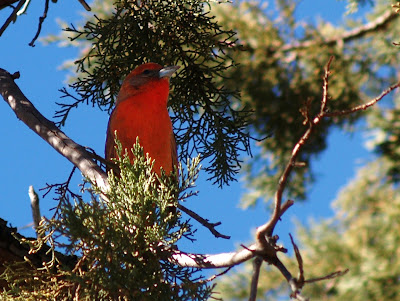 A flash of red greets me at the feeders of Madera canyon Lodge: a Hepatic Tananger. This male sports a lively orange-red front while his flanks, back and wings are olive green-gray. Nice! I've mostly seen Summer Tanangers in Arizona, and this time I even get a good look at the yellow-green female at the Kabo B&B further up the road.

I miss theYellow-eyed Juncos. Instead there are Chipping Sparrows and Pine Siskins on the ground. 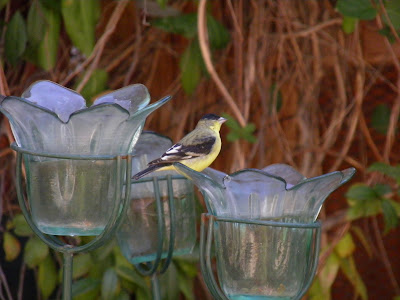 Swarms of Lesser Goldfinches visit the feeders. Some of them have nearly black backs. None of those wants to pose for  photo, though.
The clownish, very social Acorn Woodpeckers are always all over the feeders. Their breeding cavities and thousands of acorn smithies in the wooden telephone poles show that the gang stays around year round.

The Arizona Woodpecker, recognizable by his plain brown back, is a southeast Arizona specialty. Usually I catch glimpses of this bird in summer on Duquesne Rd close to the Mexican border or south of Pena Blanca Lake. It was a nice surprise to find on at the suet block at the lodge where it seemed undisturbed by my struggle with my new little view finder less camera.


Places where birders come together function as information exchanges. A field guide is hardly needed if one has keen ears and doesn't hesitate to ask questions. So in exchange for my introduction of the woodpecker, I get the tip that 'the' Trogon has taken residence at the Kabo B&B. 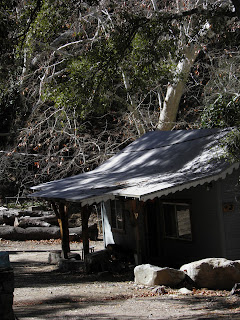 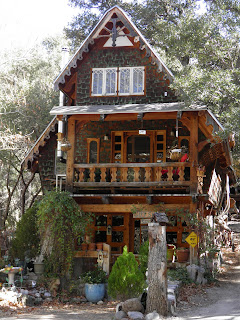 I find the promised berry-covered  bush that had attracted the sole wintering Trogon across the street from the B&B, too far from the road to see whether it is an introduced Pyracantha or a native Madrone. The birds don't seem to care. The Trogon soon swoops down from one of the Sycamores to join a Robin, some Siskins and a pair of Dark-eyed Juncos. 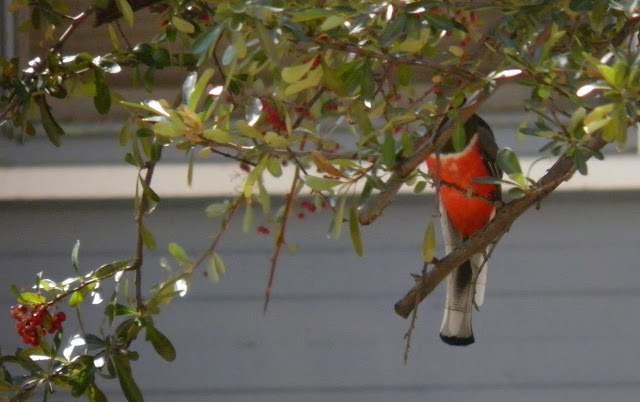 Too bad that he is too intent on those berries to pose for a better photo! But at least all the field marks are clearly visible. 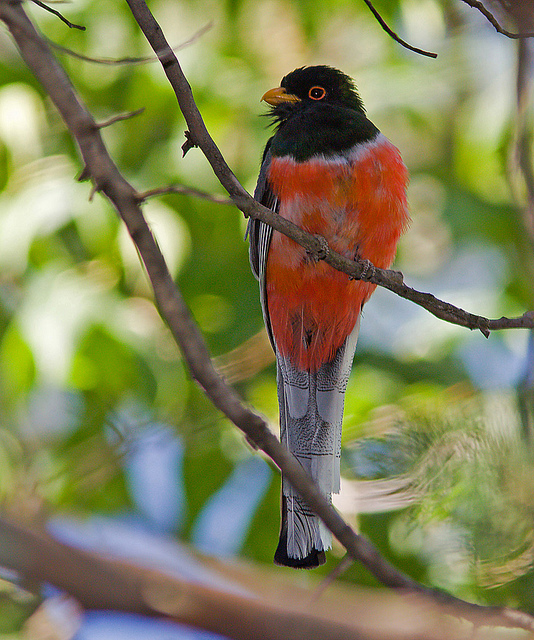 Lois Manowitz, a great bird photographer from Tucson, graciously allowed me to use one of her Trogon photos here. It was taken during the breeding season at Madera Canyon. I am not sure whether male Trogons help incubating the eggs, but those disheveled feathers seem to indicate that he might have brood patches.

Wintering Ducks and Shorebirds at the Santa Cruz River in Marana 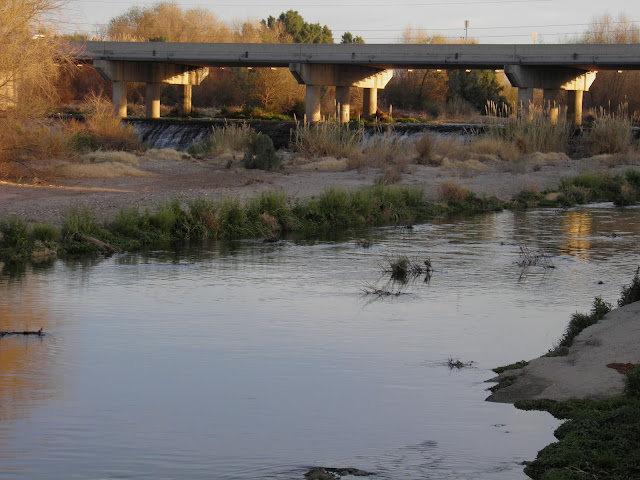 For several days and nights it has been colder than ever here in Tucson. Not many beetles and bugs to watch under those conditions. But along the steadily flowing Santa Cruz River that is fed by the Pima County Water Reclamation Plant, there are more birds than in other years.
The churning water of the overflow directly under the bridge is the favorite spot for most ducks, a Green Heron, some Pied-billed Grebes and a few American Coots. 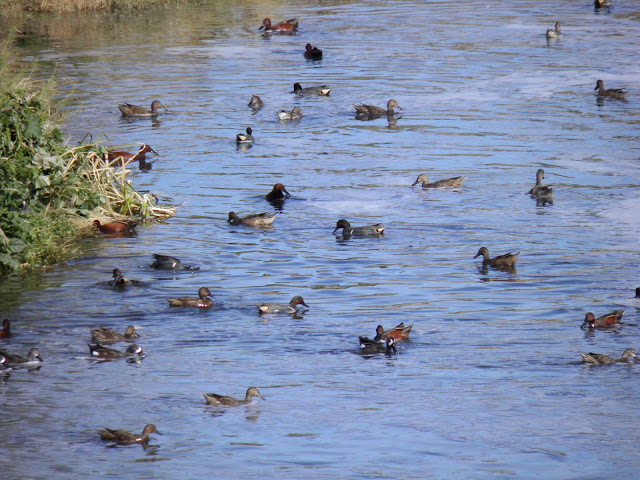 Three species of Teal dabble in the churning water or rise up in tight flocks flashing their brightly colored wing patches that gave them their common species names.