Well, I do. But now I can imagine how they must feel. 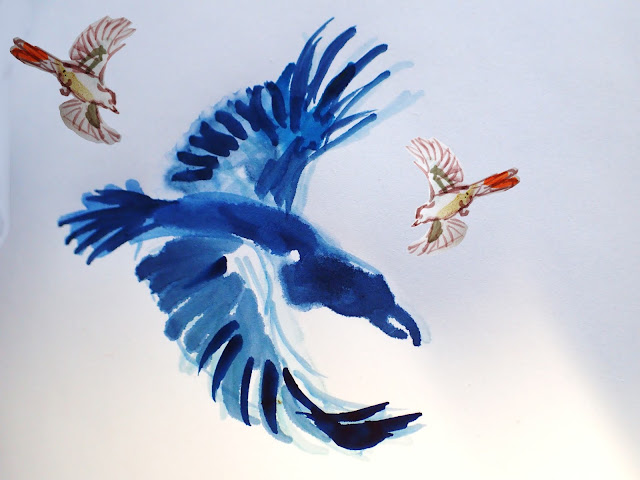 Today our resident Ash-throated Flycatchers were on the attack. A raven, maybe a young one, flew low through our backyard, and a flycatcher dive-bombed his back. 'Squack'! said the surprised raven, waking up our dogs who also love to hate his kind. And stormed after him. 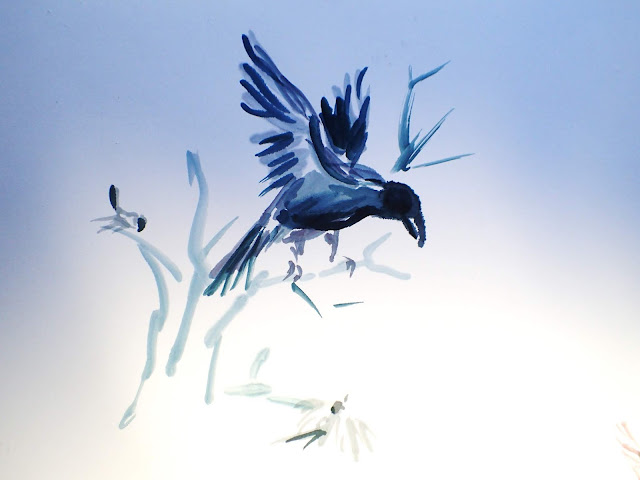 Pursued on the ground and from the air, the poor raven took shelter in an ironwood tree. His landing was so clumsy that he tumbled for a minute from branch to branch before he found his footing. A White-winged Dove flew by minding her own business, but the flycatcher were so enraged that they even attacked her. But then the Black-capped Gnat-catchers betrayed the raven, he left his perch, the Ash-throats chased again, and the raven  flew towards quarry and the Kestrels' Saguaro. 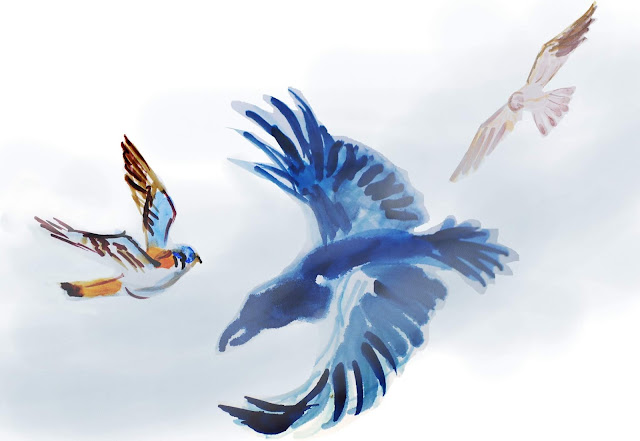 Too close! male, and then even female Kestrel picked up the chase.  Poor raven fluttered on, swooping falcons  above and below. But they did not go as far from their nest as the Ash-throats did - or were there 2 pairs of Ash-throats involved? Anyway, the raven finally made it back to the Eucalyptus tree where his elders were sitting, watching the chase, never moving a wing. Did they let him learn a lesson? 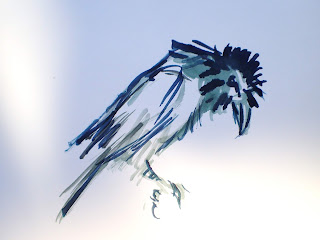 On Memorial Day Weekend, I was in Prescott for an art festival on the courthouse lawn. Ravens always live on the courthouse - it's their rock cliff fort. Very early on Sunday, one young one, by her behavior a female, was sitting on the lowest branch of an Elm-tree, chatting and clucking. Those ravens are pretty used to people. 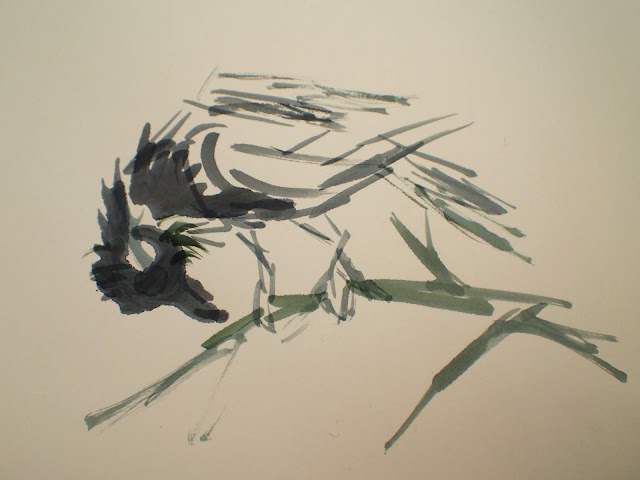 When I imitated her clucking, she took no offense, but started to inch closer on her branch in coy little steps, then spreading her wings a little and making little bows. Her head got big and round with all its feathers erect, the iris of her eyes widened, and her clucking became a flirty cooing. From above a big raven scolded, but he stayed on the roof, just peering over the eves. The young one shook her feathers, all sleek for a moment, and cawed back. But then she became sweet and flirty again, and we continued our conversation. Until suddenly something hit me on the back of my head. Not hard, but noticeable. Then my shoulder, with the swish of feathers. I was pretty shocked at first because I thought the big guy had come off the roof .... but no, he was still just watching. But close to me, a nasal 'daeh- daeh-daeh' came first from one tree trunk, then the other ... 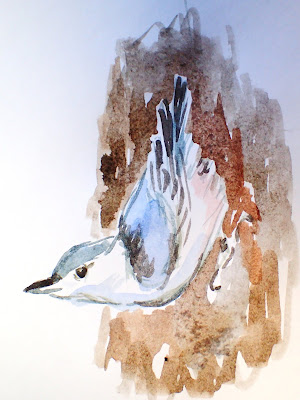 Then my attacker came racing around the tree:   a Nuthatch! The small, white-breasted bird ran up and down and around the tree, flew at me, then the next tree, then came back for more. I certainly don't look like a raven, but I must have sounded like one, German accent or not. So now I know how those ravens must feel ....

The Kestrel Pair in our backyard

May 21. Yesterday Shortly before 5 pm I heard again the intense keening sounds of  Kestrels in the eastern Saguaro area of our property. But by the time I had binoculars and camera, there was nothing going on.

I got to watch dozens of feedings of the Gila WP chicks in an arm of the closest Saguaro, but no Kestrels.
At that time, I did not really know where the Kestrel nest would be, but observation and whitewash on the ground had told me where the male often hangs out: in a dead Palo Verde in the middle between our eastern Saguaros and one right on the border to the quarry. 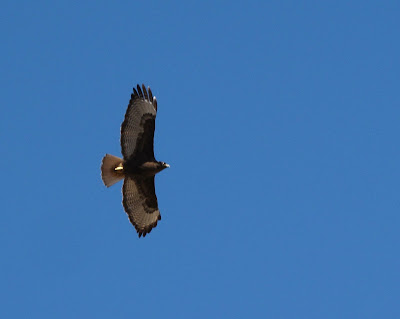 After a while  our Dark Female Redtail soared along the slope of the Twin Peak and the ravine. Just when I thought her presence spoke against a Kestrel territory, the male Kestrel showed up and attacked her. He looked as small as a mosquito against her bulk. But he has courage and agility. Still she kept patrolling the mountainside. 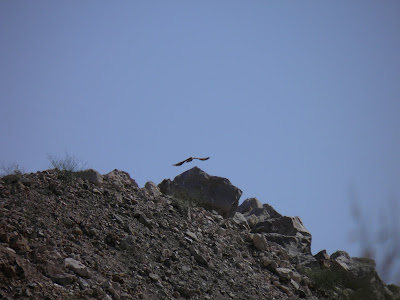 I stood for another eternity and was ready to leave when suddenly, out of nowhere, a female Kestrel came from the east and, high over my head, met the male flying in from the west. Noisy greeting, then they landed on the Palo Verde, a few feet apart. He kept keening, she looked very disheveled. Then I realized that the scrubby part was not her brood-patch but a dead bird she was clutching. The male must have transferred it to her when she greeted him in the air. He left, she fed. For a long time she seemed to have no intention to stop eating before the whole thing was gone. She changed position on the branch several times, preened a bit, ate some more. But finally, she took the left overs and flew to the saguaro by the fence - slipped into the hole where a tribe of bees lived years ago.  So fast that I nearly missed it. No sound from inside, the chicks must still be very small. When all of this finally happened, the light was too low for any photos.

The following images were taken this morning around 10 am


The female had very pale markings compared with the one in the picture which I took some years ago when they nested here. . Yesterday I first thought that she might be a fledgling (I did not want to go too close) But the expert way she handled the big prey spoke against her being a chick and also that she flew into the saguaro cavity afterwards. Observing the pair again today confirmed that she is indeed the adult female.


Posted by Margarethe Brummermann at 11:58 AM No comments:

As some of you may know, part of my business is to help other scientists to find insects that they need for their research.
Last year a client wanted to search for specific tree hoppers in Arizona. We found all three species that he was looking for, and he recorded their voices. Amplified, they sounded like an ocean recording of all kinds of whales. Quite amazing. Adults and nymphs seemed to communicate with wails and clicks

This year he had no time to come out to Arizona, so today I drove to Box Canyon in the Santa Ritas to collect nymphs and adults of Enchenopa permutata on Lycium.


But when I got to the bushes where we collected and recorded last year, I found to my dismay that other insects had taken over. Leaf beetles in the genus Monoxia and their larvae were feeding on the leaves and the bushes were in very bad shape. 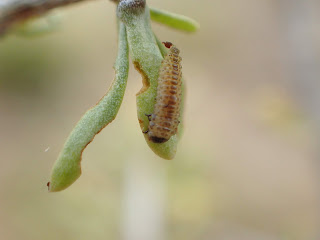 Many of the remaining leaves showed rust infections. On those bushes were only very few Echenopa adults and nearly no nymphs.


It took me a long time to find healthier Lycium, but luckily there were tree hoppers on those. Instead of gleaning like we did last year, I finally resorted to the use of my beating sheet.

Not easy because of the dense, low growth but in the end I had hopefully enough bugs for my client. Now I hope that they survive the shipping and like the potted Lycium plant that is waiting for them. And start singing again!
Posted by Margarethe Brummermann at 12:21 AM No comments:

A tethered Ladybug, a parasitic wasp and a virus

I found this below Snow Bowl in Flagstaff, Arizona: Ladybugs, seemingly alive but immobile above a little cocoon, as if guarding it.
The explanation:
Dinocampus coccinellae (braconid wasp) stings ladybug and oviposits. The wasp also transfers virus D. coccinellae paralysis virus (DcPV for short). The virus multiplies in the developing wasp larva and eventually infects the Ladybugs nervous system. At the time the wasp hatches and pupates, the virus immobilizes the ladybug. The brightly aposematic and toxic beetle now stands guard over the silk cocoon that its  former unwelcome guest has spun beneath it, basically providing protection for the pupa. The beetle is still able to move, but not walk away. The DcP virus may actually enhance their deterrent effect by making the beetle  twitch.
Some beetles seemed to recover later to be able to move around, but how far the recovery goes is unknown.

Posted by Margarethe Brummermann at 9:38 AM No comments: