National Moth Week - not much going on in AZ, or is it?

At the end of July, National Moth Week is coming up. It's a first for the US and many organizations like for example Bugguide are sponsoring it. While 'Lep' experts in most states offer many special 'mothing' events to the public, Arizona seems to be sadly lagging behind: One event in the Grand Canyon area but nothing in our famously biodivers  SE corner of the state. I think I know why we have ignored repeated suggestions to organize and sponsor an event: We are too busy, too busy mothing, that is.

Iam no Lepidopterist. I was originally much more interested in beetles, but this year I have been following the appearance of moths species at our house, documenting over  80  species since March. By now the species numbers and the amount of individuals are just exploding after the early monsoon rains, and the diversity should increase for at least another month.

At this time of the year, I try to go on bug safaris several times a week. That means coordinating participants arriving from different directions, driving to the canyons through washes and over protruding rocks, dragging around generators, batteries, mercury vapor lights, black lights, stands, sheets, cameras, and collection vials, hiding from thunderstorms and smugglers, chasing off bats and skunks, seeking out day-active species during three digit temps and raising humidity, staying out all night, coming home at dawn, identifying or posting the haul, counting chigger bites, accommodating collected ovipositing females and shipping the eggs to scientists across the continent,  ....who wants to actually organize a Moth Watching Week event?

But I'll be leading several public black lighting tours that are sponsored by Southwest Wings in Sierra Vista and by the Audubon Society of Tucson in August and September.

During those events we will be looking for other insects and arachnids as well, but I know that even a big headed Pasimachus crawling onto the ground sheet has a hard time competing with the tumbling arrival of a big beautiful Polyphemus Silk Moth.

Last Thursday my friend Carol Tepper and I tried out my new MV light, taking advantage of the electricity outlets at the Santa Rita Experimental Ranch in Florida Canyon. Around the cabins and labs are rolling hills of mesquite grassland with ocotillos, yuccas, agaves, opuntias, and acacias, and  Mexican Blue Oaks, some sycamores and stands of hack-berries are lining the creek. Wild Cotton is now leafed out and as tall as I. Seep Willow emits its pungent swamp smell.
We left the black lights close to the creek and exercised our legs and lungs while carrying the MV stuff to the top of the hill, hoping that light would draw in an ocotillo specialist from the opposite slope (it didn't).


Still, at both lights we were surrounded by insects, mostly moths, and they also covered the walls around several porch-lights that Mark, the station manager, kindly left on for us. I was noticed some distinct differences to my black light collection a week earlier at Madera Canyon (upper parking lot, juniper-oak habitat.


Chrysina beyeri was the dominant beetle species at Madera Canyon, and of the great moths, the big polyphemus silkmoth Antheraea oculea was most impressive and numerous.

In Florida Canyon we didn't see any C. beyeri  and only one  cercopid Silkmoth moth, Hyalophora columbia gloveri. We waited in vain for its ocotillo-feeding relative, the dark Eupackardia calleta. 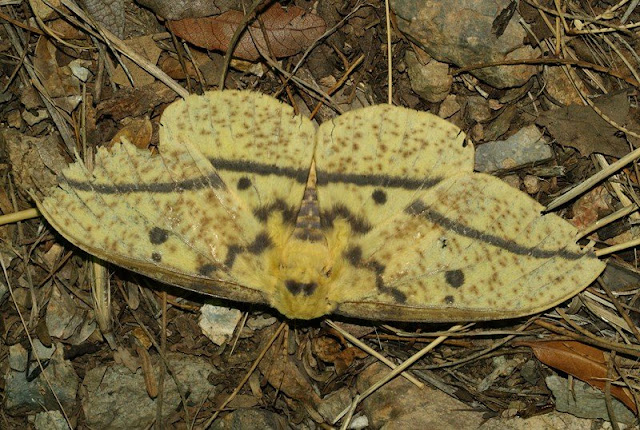 Instead, many specimens of Eacles oslari in a wide variety of color combinations came mostly to the MV light.

Last year we found this huge bizarre caterpillar on its host, a wild cotton plant in Florida Canyon. This year I finally got to see the big, plump adult moths Citheronia splendens sinaloensis. 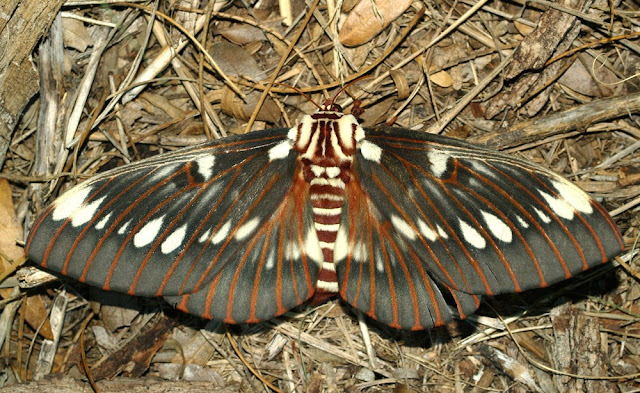 While the big Silk Moths are most impressive, I also like the colorful Tiger Moths. I remember meeting a scientist in Portal who was collecting the pretty Bertholdia to study its ability 'to talk back to the bats'. This moth not only perceives the sonar of an approaching bat like many other insects who simply try to drop out of earshot, but it actually emits sounds of its own to throw off the bats echo beam.


Three Tiger Moths that were flying at Madera Canyon when I black lighted there a week ago..


Two representatives of the same subfamily at Florida Canyon. (When the taxonomy of this group of moths was revised lately, the Tigermoths became part of the family Erebidae).


Moths don't have to be huge or prettily patterned to be interesting. Here are some small Leaf Skeletonizers that are mainly day-fliers but also come to light traps. At Madera, there were two red Lycus (Net-Winged Beetle) mimics.  Fittingly, the beetles danced their mating flight around the oaks before sunset. At Florida only the little dark one on the right came to the light at night in numbers. This species is supposed to be mostly distributed in the eastern US.

Madera and Florida are geographically close to each other. They are two parallel canyons of the western Santa Rita Mountains, similar in orientation and both containing a stream that flowed only intermittently over the last drought years. Although oaks grow along most of both canyons, Madera is shadier and home mostly to Silverleaf Oaks while Florida is famous for its beautiful old Mexican Blue Oaks. The moth populations, though with many overlaps, also clearly express  the differences between the canyons. 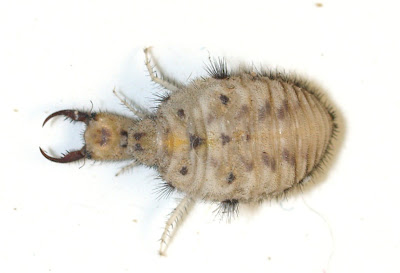