Santa Rita Mts after the first rains of monsoon 2017

On big rocks in a creek bed with a little water I found a strikingly big Skipper: Megathymus ursus, Ursus Giant Skipper
Butterfly folks always ask if I see these. Now I know why, this is one very impressive skipper! Big and heavy! Rare enough to for mine to be the first for AZ on BugGuide.net, even though the type-location is the Catalina Mts in Pima Co (Type-location: where the originally described specimen was found). The inside of the wings has yellowish-gold markings, but It would not sit still to have those photographed.

Another giant, though his female is even bigger, is this Scoliid Wasp, Campsomeris ephippium reaches more than 2 inches in length. Also impressive was his reaction to being pushed around a little: He made rather convincing stinging motions extending the retractible "trident" at the apex of the abdomen. Those sclerotized genitalia plus that behavior are a good example of intra-species Batesian mimicry.(note: only female hymenopterans have a stinger and venom glands, because the stinger is the ovipositor).
The females are usually busy scouting the ground for big scarab larvae, but males can be found nectaring on flowers. These Mexican wasps are now permanent residents in SE Arizona including the Catalinas (Sabino Canyon). I think we saw the first ones around 2010 in the Huachuca Mountains.

There were more Scoliids on the same Acacia - just after the first rains, there were not too many blooming plants. These ladies were big for their kind,- over 3 cm long. Triscolia ardens are quite variable in size. I'm not quite sure if I'm not misidentifying a similar species at times. But individuals of many parasitic species develop by the luck of the draw - dependent on the size of the host that their mother was able to find.

The rain triggered a mating frenzy among Harvester Ants. Hundred of alates (winged males and females ready to mate) crawled and flew to the top of a telephone pole. Up there they did their aerial dance during which males grabbed females and together they tumbled to the ground, usually three to four males per female. I wanted to collect some for the research project of a friend. It was slightly disconcerting to have my most feared nemesis rain down on me by the dozens, but I figured they'd be too busy to sting. I was kind of right: the ones that fell into my shirt from above did no harm...but a lowly worker did crawl up my pant leg. Before I had my boot of and could drop the pants, I got three stings from her.  Still red, hard and itchy three days later.

Euphoria spp. are day active scarabs. Probably mostly males were flying - in search of females. The pretty green E. monticola stayed in the understory of oak forest, while E. leucographa was 'hill-topping' (aggregations flying around the top of the tree) around all kinds of tall trees in the grassland.

On the rocks along the creek: our most common Tiger Beetle, not yet in great numbers.

Not far from the Tiger Beetle, I found  a nymph of the Largid (Bordered Plant Bugs)  Arhaphe cicindeloides. This species seems to imitate the behavior of the tigers, but if that is mimicry or just being smart and fast when chased I don't know. 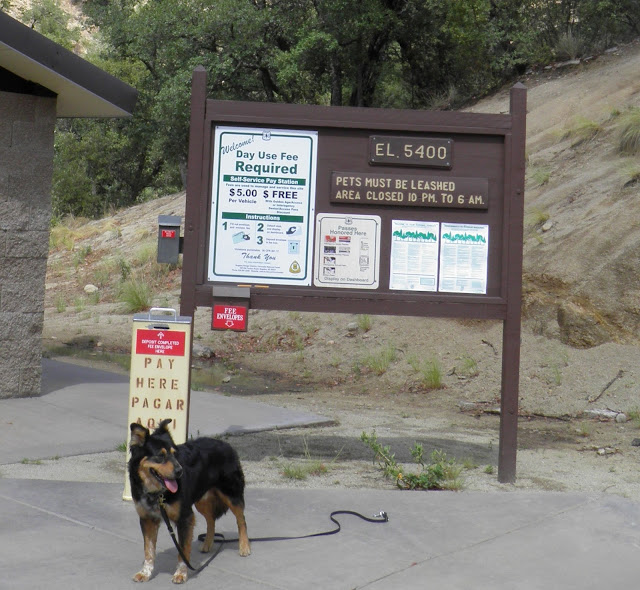 Mecki  would like to point out that all the photos above, except the Pogo ones, where a cooperative effort.  From Bear Skippers to Tiger Beetles, we faced and stalked them all of them together, connected by the legally prescribed leash.  How else would she keep the camera steady?

Two weeks ago, I posted this series of Lycids (Net-winged Beetles) from Mount Lemmon on my blog. Joe Cicero, a friend and former college who has moved to Florida and now probably misses Tucson, commented that there is another smaller species on the mountain.

He was talking about Adoceta apicalis  which he described as a small look-a-like of Lygistopterus rubripennis. In 1950 two North American species in the genus Adoceta were described by Green from only very few specimens each. It seems that no others were found for a long time, maybe until Joe discovered a few specimens some years ago under pine bark on Mt. Lemmon. These were Adoceta apicalis. They are smaller than the Lycids I showed last week, the wings quite parallel sided, and head and pronotum is black. The elytra end in an apical black band.  Joe challenged me to find more of them.

Last Wednesday, Ceanothus fendleri and Ceanothus integerrimus were in full bloom along the path that crosses an area that was heavily burned several years ago. There were plenty of red and orange things crawling on the flowers, from false blister beetles to moths, seed bugs and tarantula hawks (not pictured).

Leslie Eguchi and I were shooting pictures of many different flower visitors and eventually came across an accumulation of small, narrow Lycids that were mating on the blooming bushes. There seemed to be many dozens of them. (Joe Cicero explains that Lycids not only congregate to mate, the females also come together and oviposit in groups. He thinks that I may have happened upon a mass emergence from a 'group-clutch' like that.)


I was thrilled that I had found Joe's species. But being part of a group of naturalists who usually don't collect and who might be offended, I only collected a few specimens, making sure to get males (there were many) and females (much fewer) both.
Later, from home I sent photos to Joe to report proudly "mission accomplished".

I was pretty disappointed when Joe at first glance called my beetles 'just small Lycus sanguinipennis'  - he had immediately noticed that the pronotum of these guys wasn't black ... and then he thought that maybe I had a new species ...

When I posted my photo on our SW  Arthropods page on Facebook, Arthur Evans had the great idea to share it with an international group that concentrates on a related beetle family, the Soldier Beetles, Net-winged Beetles (Lycids) and Soldier Beetles (Cantharids) are similar enough to interest some of the same taxonomists, and soon we heard back from Michael Geiser in Switzerland:
"It keys out as Adoceta ignita Green, 1950, a species I've never seen before (so the ID is just based on the description). A. ignita was described from two specimens from Arizona and is apparently very rare. I don't know how many times it was found after the description." Soon other specialists in the field like Michael Ivie and Vinicius Ferreira were alerted to our quest and agreed wit Michael Geiser's ID.

We also learned that there is an ongoing discussion about the taxonomic status of the genus Adoceta. In their 2017 paper Motyka et al. merged the genus Adoceta with the genus Lygistopterus. But since until now there were only so few specimens of the American species, these were not part of the genetic sequencing that the study was based on. We will now send a specimen to the lab around Bocak - I'm curious what the result will be. I also thought I would get up the mountain in time to collect a few more specimens, but right now Catalina Highway is closed because of an out of control wild fire. So I'm afraid the species I found may just get lost again.

P.S.
After this blog was published, I got an email from Michele Lanan, the new resident scientist at the AMNH's Southwestern Research Station in the Chiricahuas. She checked the holdings of their collection because every AZ sky island (and Sonoran, too?)   may provide similar habitats, at the right elevation, to the Ceanothus areas in the Catalinas. Sure enough, a so far unidentified treasure was found.

References to cited papers will be added later
Posted by Margarethe Brummermann at 10:46 PM 3 comments: