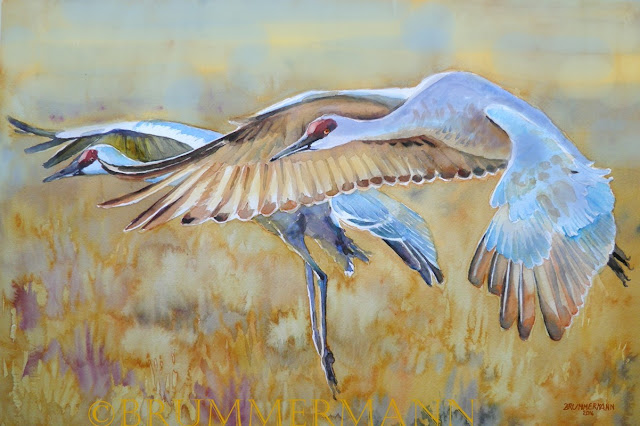 This year I had a show in early January and no time yet to see the wintering cranes around Willcox Playa and Whitewater Draw close to Tombstone. 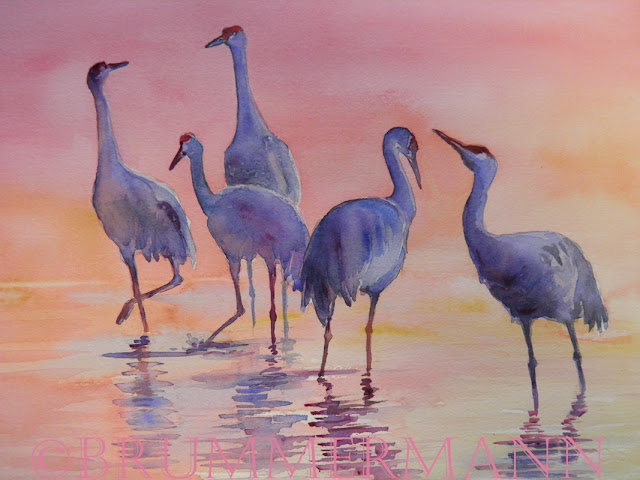 So I revived my memories by looking through slides and photos from previous years. The result are my first watercolors of 2016 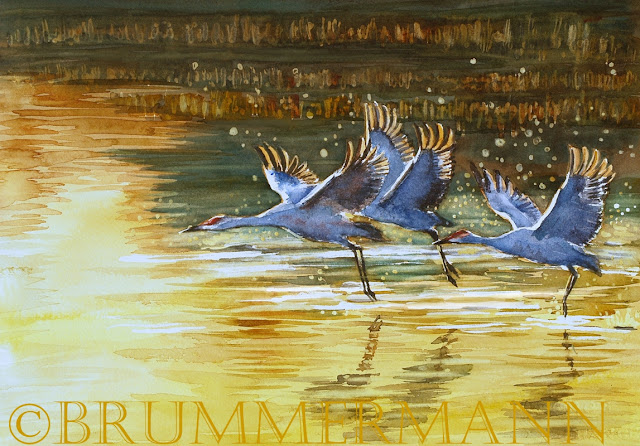 Cranes taking flight into the morning sun. The spray of drops and the edges of the birds' wings catch the light. Otherwise the birds are blue shadows against the warm colors of the reflections on the shallow water that hardly covers fields of old cornstalks. 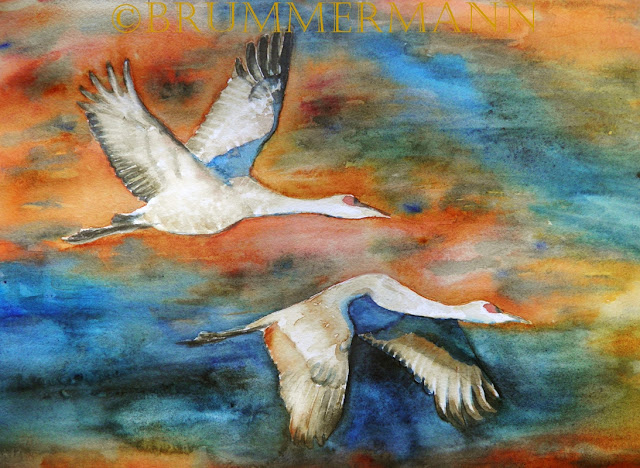 In the evening, a pair of Sandhill Cranes against a hillside rich with the jewel tones of sunset and deep blue shadows.

Prints and Originals are available. For prices see my Watercolor blog
Posted by Margarethe Brummermann at 9:08 PM No comments:

Last week Ned Harris and I made a trip into the Santa Cruz Flats around Picacho Peak to look for Caracaras and other raptors.

We found several groups of the big birds that are momentarily considered Falcons - they used to be ranked with vultures - in freshly plowed fields, mostly in mixed flocks with Ravens. I heard that the Caracaras feed on pecans, but I cannot confirm that. The oily nuts are appreciated by ravens - some in Patagonia had learned to crack them and spent days harvesting - but I have yet to see a caracara try that. They often fly up into the old pecan trees along the roads, but to feed they seem to concentrate on grubs and worms in freshly turned soil. I have also seen them turn over clods of turf  with their feet.

Kestrels, Redtail Hawks and one very shy Prairie Falcon were roosting on power lines and posts. As photographers we made our peace with those ugly perches because the birds definitely love them. Without those artificial perches, the birds could make little use of wide open agricultural areas. 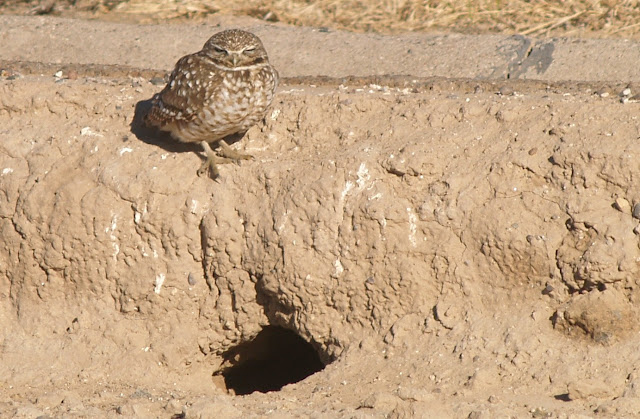 Burrowing owls slept in front of burrows and drainage pipes that they probably use for nesting. 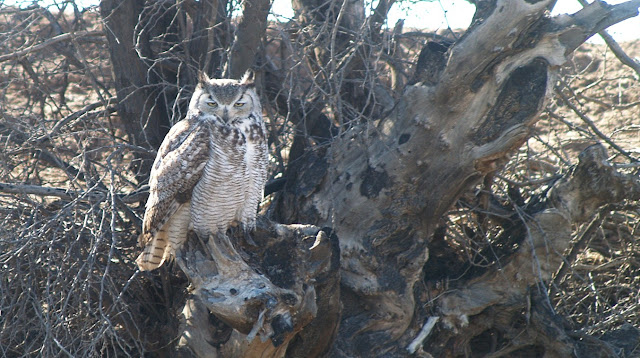 A Great Horned Owl posed willingly, if rather sleepily. Did all the owls have a really hard night? 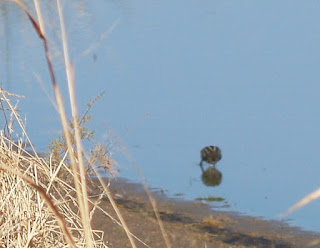 On a little pond I found a Snipe, but got no good photo. Still, it was nice to at least see it so clearly. Greater Yellow Legs were poking around in a freshly tilled fields. 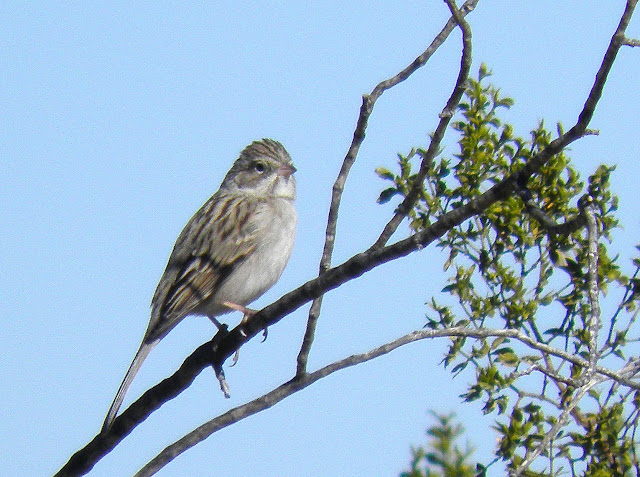 Repeatedly, huge migration flocks of  sparrows flew up from the grasses. But we both aren't good at identifying sparrows. Raptor man Ned calls them simply prey. 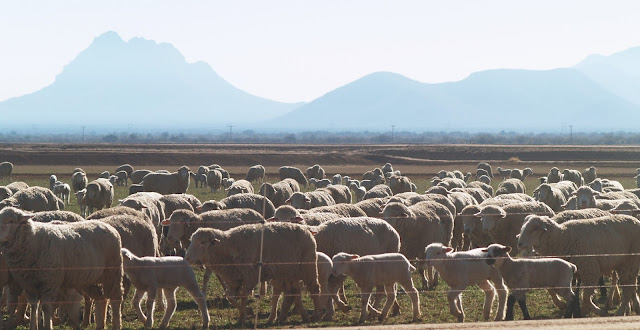 Surprisingly, we  spent the longest time watching herds of sheep. Lambing happens early here in Arizona, so there were no newborns anymore, but the lambs were still at a cute age. What fascinated us, though, were the two big white dogs that were in control of the large flock. 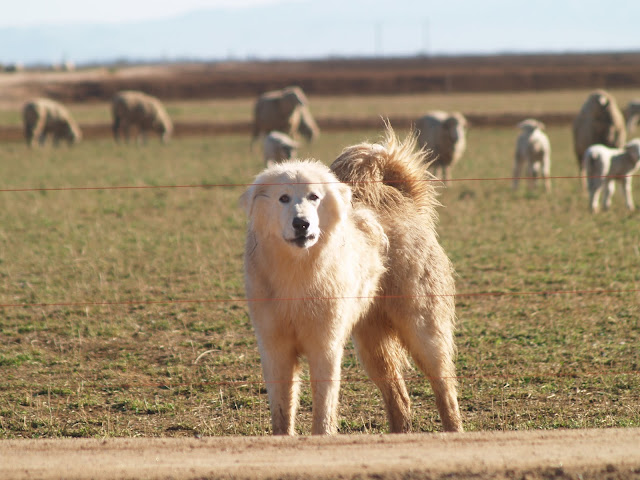 As we got out of the car with our cameras, the dogs raced up and barked, but they never left the direct vicinity of their charges. And they soon recognized that we were neither mountain lions nor wolfs. The sheep were not alarmed by the barking: they came walking up to their protectors and joined them. These were classic old European flock-guarding dogs, probably a close descendant of the great, white Eastern sheepdogs that slowly spread across Europe over 2,000 years ago: the Karabash and Akbash sheepdogs of Turkey, the Kuvac of Slovakia, the Kuvasz and Komondor of Hungary and the Pyrenean Mountain Dog of France are all of this type. Ours looked particularly similar to Italian Maremma Sheep Dogs. 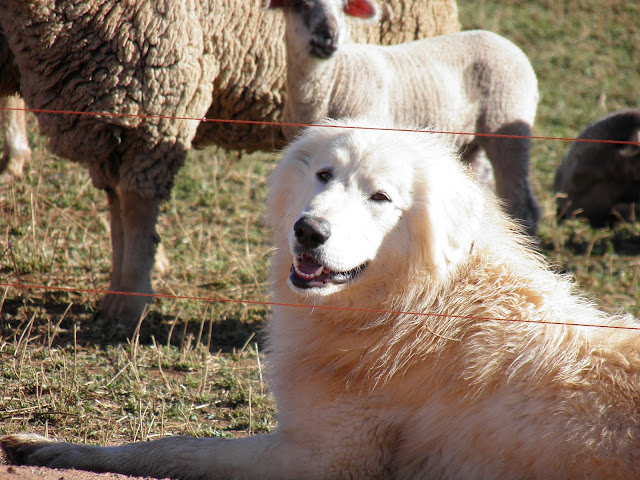 Dogs like these are raised with the sheep and feel that they are an integral part of the herds. A while ago I heard that international help organizations are giving puppies to herders in developing countries as an aid project, especially in areas close to National Parks in Africa. Of course, they are primarily there to protect the live stock from predators and thus reduce the losses that the human owners may incur. But of course the big dogs also indirectly serve to protect lions and wolfs from the wrath of herdsmen who might hunt or poison any predator that they perceive as  a threat to their herds. 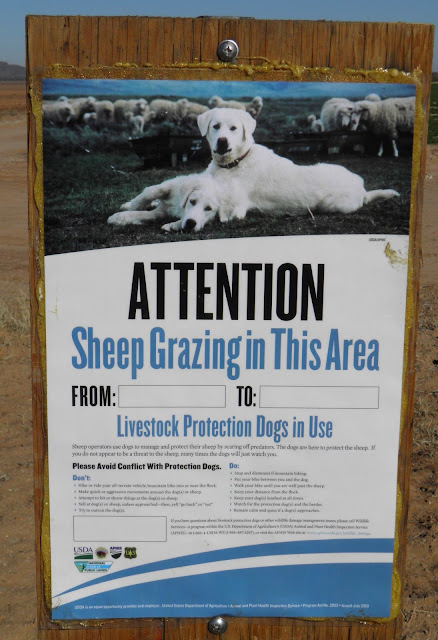 We later found signs that warned hikers and bikers of the presence of the big, unattended dogs and gave advice how to behave around them. I wonder if a person who doesn't already know that those giants are harmless as long as you don't mess with their sheep would learn it from the fine print on those signs. 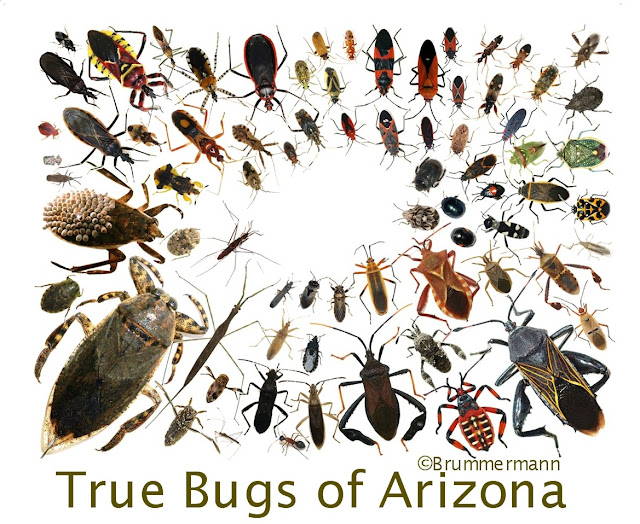 This is number three of my Arthropods of Arizona Collection - and I have some more ideas based on the photos in my sock drawer. For these posters I use photos that I have taken over the last ten years. All are of living insects - if possible I photographed them on white background, but some are also liberated from very colorful natural backdrops. Some legs and antennae needed to be rearranged or even graphically replaced...

On this poster 28 families (29 if you count Phymatidae) are represented by 73 identified species. A black and white template and the species list organized in taxonomic groupings comes with the poster if you order one. So this one has much more info than the other two - I have more practice now. The poster are 18 in by 24 in and cost $35 plus shipping. It is a fully archival art print. You can order here (send me
a message).

Here are the first two, I just reordered them from the printer, so I have a few of them in stock, too.
To order, please send me an e mail to mbrummermann@comcast.net

Best regards Margarethe
Posted by Margarethe Brummermann at 11:14 AM No comments: