Two kinds of snow birds flock to Arizona every winter and I like them both. Mostly retired sun seeking human winter visitors bring their appreciation for Arizona's natural beauty (and my paintings thereof). Our seasonal outdoor art markets would not be possible without them. Their  midwestern calm might also effect the usual cowboy attitude around here somewhat...They certainly slow down the traffic on the roads.
But - the snow birds that I really love arrive here on their wings.

Formations of Sandhill Cranes and Snow Geese begin to appear in October. The geese have left the arctic tundra of their breeding grounds in Alaska and followed the western migration routes, that distribute the migratory flocks to winter quarters in New Mexico, Arizona and California. Some continue to northern Mexico. Eastern populations follow the eastern migration paths to Texas, the golf states and Florida.The sandhill Cranes wintering in Arizona represent the Rocky Mountain and the Mid-Continent populations. They made the journey in high altitude flights with few interruptions.

In Arizona, Cranes and Geese settle mainly in Sulphur Springs Valley of Cochise County, especially in the Playa around Willcox and at Whitewater Draw north-east of Tombstone. There they find flat, shallow-water roosting areas close to harvested grain fields for feeding. While the habitats of the Sulphur Springs Valley are less divers and the numbers of birds are smaller than in Bosque del'Apache in neighboring New Mexico, Whitewater Draw is still a great place to watch ten thousands of birds up close. The birds spend the night at the roosting area, fligh off at sunrise to spend several hours feeding in the fields and return before noon to the roosting places and rest there.


Much more sporadically than in the morning, groups of birds fly off for some afternoon feeding.


During this coming and going it is obvious that family groups are staying together and the 1st year juveniles are still with their parents.

There are always predators hanging around great accumulations of birds. At Bosque de l'Apache I watched coyotes stalking the geese, jumping meters off the ground to grab the birds that  were slowly gaining height,  too slowly it turned out. Over-flighing eagles send everybody into the air - and the bird watchers off their chairs. I particularly love the light flashing off thousands of geese turning in unison. 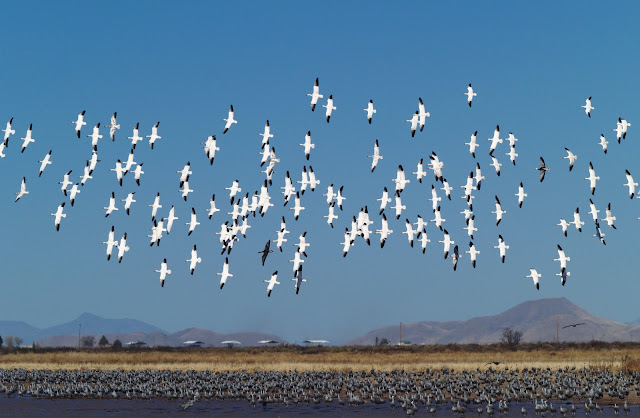 Last Sunday, a bobcat had been seen in the morning, but by noon all birds were resting rather quietly. Only a lonely female Northern Harrier tried to scare some ducks out of the reeds, a Cooper's Hawk was watching from a tree and a Redtail rode the thermic in the distance.


At Withewater Draw the Arizona Game and Fish  Department maintains viewing platforms and conducts regular counts of the wintering birds.The results are posted at the entrance to the area. 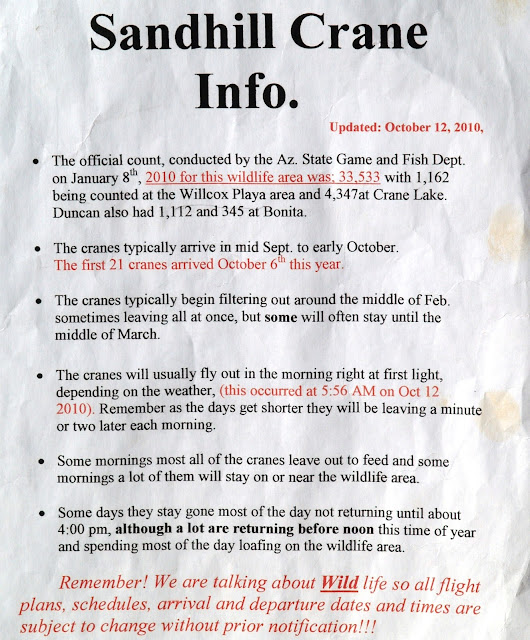 All 30,000 cranes seemed to be in residence last Sunday afternoon, while there were much fewer geese than in other years.
Of this day at Whitewater Draw I'll always remember the sounds: the constant croo-crooh calls of the cranes, from the ground, from the air announcing new arrivals, the deep whomp, whomp of their powerful wings, and the fast crescendo of wing beats when groups of ducks took to the air.
Posted by Margarethe Brummermann at 10:00 PM 3 comments:

Happy New Year with Snow for the Snow Dogs

Posted by Margarethe Brummermann at 11:01 AM No comments: