From January to April the art show season in Arizona is in full swing and I am busy preparing inventory, booking shows, setting up my tent, selling art, book-keeping and tax-paying, and then producing more inventory...So there is little time left for nature walks, photography and blogging.  But the shows are outdoors. Last weekend in Fountain Hills in Maricopa County, I was greeted every morning by a beautiful if strikingly unecological sight. And I don't mean the fountain itself...


Fountain Hills prides itself to sport the world's tallest fountain. True or not, it's certainly a waste of a lot of energy and  water here in the desert. It only raises up once every half hour, but even the pond, surrounded by manicured lawns, is produces a constant water loss due to evaporation....

No natural vegetation, desert or riparian, is allowed to grow and upset the groomed appearance..
But still, the water attracts avian winter visitors as well as human snow birds. There are usually many wigeons and coots that graze the lawn and some diving ducks grebes that may indicate some fish in the sterile looking water. 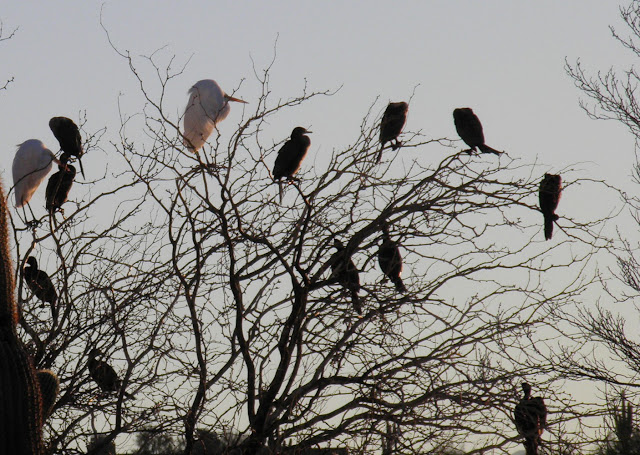 But this year a new group of birds had discovered the little island in the pond. About forty cormorants and two dozens Great Egrets perched in the bare branches of its single tree. Here they spent the night protected from prowling predators. 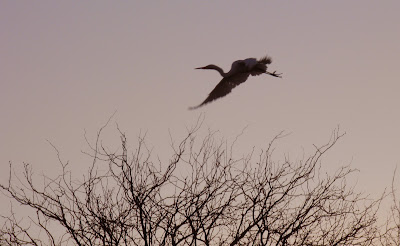 As soon as the sun broke the horizon south of the snow covered Four Peaks the cormorants stretched their long necks and the egrets shook their silky long-trailing breeding plumage. Then bird after bird glided off its perch, the cormorants dropping nearly down to the water level and the egrets gaining height right away with heavy flapping wing beats.
By the time most artists and customers arrived at the show all  cormorants and egrets had left for better fishing waters, maybe along the Verde River. But at night fall they were back to sleep on the island. 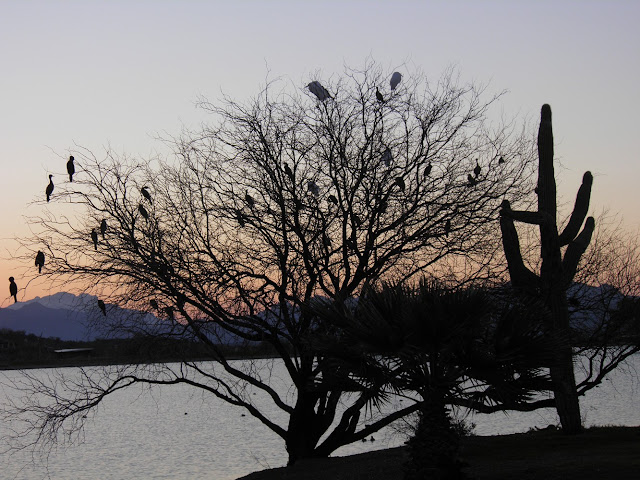 The garden planners left or even planted two lonely saguaros on the island. Their ghostly silhouettes added the strangest touch to this assembly of water birds against the clear morning sky of the desert. 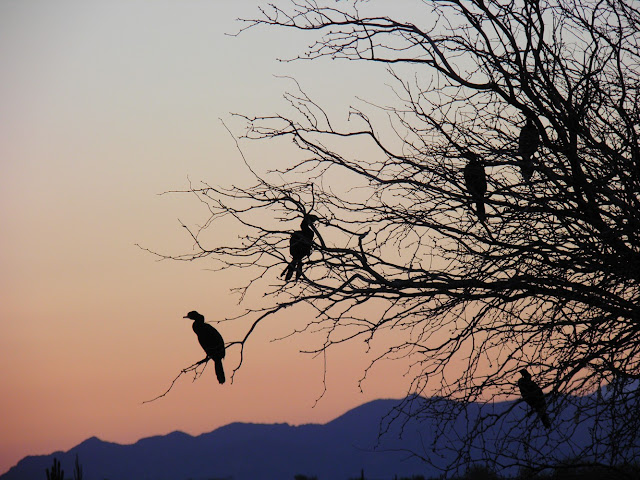 Even if the weather forecast on tv sounded dramatic for days, blizzard conditions in Tucson are relatively tame. But snow in the desert is still exciting to us so here are some photos to speak for themselves. 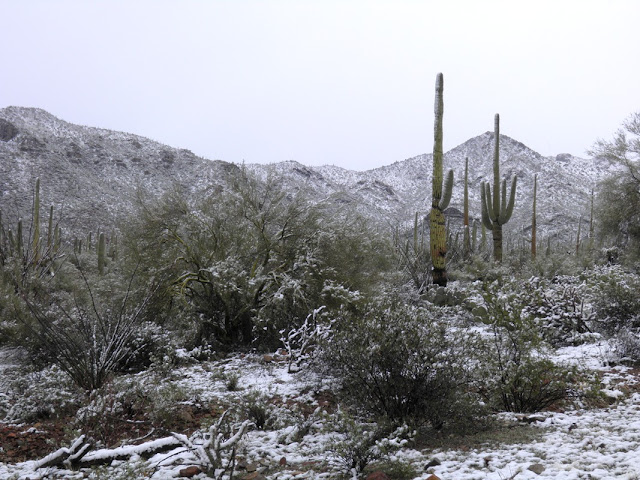 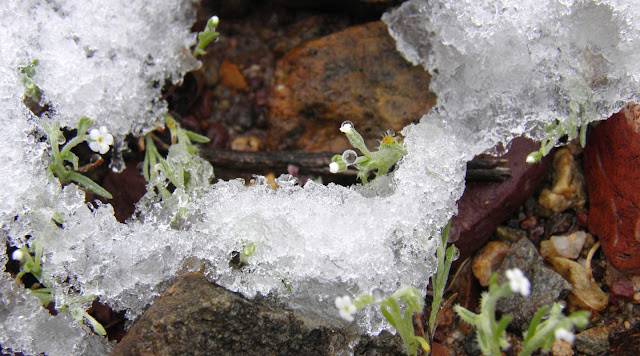 Not everything that's white is snow. Hundreds of tiny white flowers were already blooming on the desert floor. 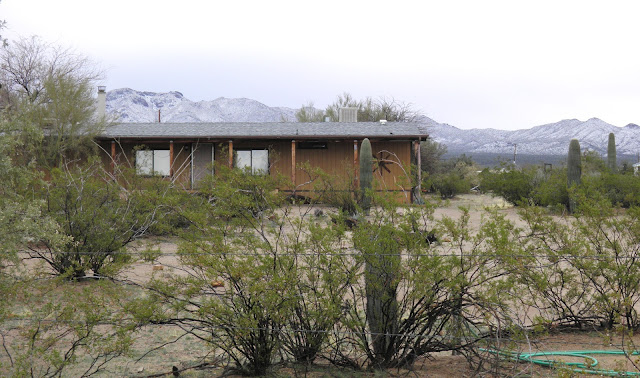 Our friends' weekend retreat in Picture Rocks turned into a snowy-mountain cabin
Posted by Margarethe Brummermann at 1:36 PM 4 comments:

Bighorn Sheep in the Waterman Mountains


Yesterday, Randy and I took the dogs to the Waterman Mountains. They are part of the Ironwood National Monument and visible from our house, but I had only been there once before with Bob Beatson. The desert there seem harsher than even our own Tucson Mountain bajada. I wanted to do a bird count for the GBBC but I soon forgot about it because there seemed to be just Black-throated Sparrows, White-crowned Sparrows and Gila Woodpeckers.

We were also looking for Turk's Head Cacti which Randy hadn't seen before, and he actually did spot the first one. We found all sizes, from little round balls to nearly knee-high  twisted columns. Buds were promising early flowers which I have yet to see.
Judging from the healthy, not frost-damaged foliage of the Ironwood trees and the freshly sprouting ocotillo leaves, this area was less hit by the latest freeze than the Tucson Mountains. Yesterday around noon the temperature had probably climbed into the seventies. After hiking in about 2 miles, steadily uphill on a loose-gravel road that made walking a little awkward, we were hot and the dogs were thirsty.

When we were about to turn back our Coydog Frodo barked alarm. The object of his interest was high up on the slope above us: a small herd of Desert Bighorn Sheep. About eight of them, several rams with big horns, and some smaller animals with lighter horns, probably not females but young males(they form bachelor groups like deer). The were rather camouflaged. Without Frodo we would not have seen them at all. They moved effortlessly up the steep slope and they seemed sturdy and well-fed.

After a stabilization in numbers from the sixties to the eighties, Desert Bighorn Sheep lost ground around here over the last 20 years. The Catalina Heard is probably completely extinct. It is thought that the drought weakened the animals and also destroyed the vegetation that they used for cover. The predation pressure of Mountain Lions under those changing conditions may have been too much. The Red Rock herd not far from the Waterman Mountains was decimated some years ago by a devastating eye disease. A developer had brought in domestic goats to clear vegetation of his land. They were carriers of the disease and infected the wild sheep to whom it proved deadly.

So we were very happy to see this healthy little group.

For thousands of years Bighorn Sheep have been very important to the human inhabitants of our area,  not just as prey for hunters but also as inspiration for artists. They figure prominently in petroglyphs all over the Southwest and they are a big part of the imagery of Picture Rocks that was name-giving for our own little community northwest of Tucson.

Posted by Margarethe Brummermann at 10:38 AM No comments:

My friend Carol Tepper invited me to take part in the GBBC, a citizens science project by the Cornell Lab of Ornithology and Audubon. Their web site is very nicely organized with a specific pop-up bird list for every gps point that you log on their map. You can still join for another couple of days, and the data do NOT have to be from your backyard, you can also send the list of a short birding trip.
So I spent a leisurely hour on our property this morning, with my new Papilio (Pentax) close-focus binoculars that I'm really fond of.

The most common and numerous birds by far were Mourning Doves, followed closely by Gambles Quail as long as there was bird seed on the ground. The noisiest are always the Gila Woodpeckers, and the most in-our-faces-at the breakfast table are the Costa's Hummingbird males. A Cactus Wren investigated between the pages of Randy's newspaper. No great surprises so far.

Then a whole group of sparrows flew in, searching for seeds among dried up bunches of cheat grass.  We used to weed after rains to keep this introduced species out, but when the rains became rare so did the grass. Now we appreciate it for its golden color and its attraction for Harvester Ants and birds. The sparrows, very clearly smaller than our usual White-crowned and Black-throated, and very lightly marked, were Brewer's.

﻿
Lesser Goldfinches used to appear in groups like that, but today I found only two singing territorial males and their mates. The same for the Phainopeplas: In early January, there was a couple of them on every Mistletoe bunch but today I found only one male sitting close to last years nest in a mesquite tree. Verdins were also close to new nests and territorial, so were the Black-tailed Gnatcatchers that I heard and then attracted by pishing. They were paired up, but I noticed no black cap on the male yet. I'm pretty sure about the species though, because I believe that I know their warning call and they have been nesting in that wash for years (with black caps). I will watch them though...could we have Blue-grays this year?
﻿﻿
At the border between our property and the adjacent State Trust Land a huge saguaro has lately lost its tallest trunk. A Woodpecker perched on the break turned out to be a Gilded Flicker female. She slipped into a fresh cavity and stayed inside for a long time. I hope they will raise a family, this species has become rare over the last dry spell.
﻿﻿A sharp 'zick' announced a Ladder-backed Woodpecker. The markings on the head of this female were so dark that I could have sworn she was a Nuttal's, but those simply don't range this far east.
I found a Mockingbird, a Cardinal and male and female Pyrrhuloxia. Curved-billed Trashers began singing as soon as it warmed up a little.
A young Red-tailed Hawk was sitting in his usual dead Ironwood, but on this cool overcast morning the other raptors didn't show. Only a pair of Ravens flew by with heavily swishing wing beats.
The only introduced species were Eurasian Collard Doves and House Sparrows. The sparrows are trying to claim a saguaro cavity that was used by Ash-throated Flycatchers last year.

My morning count took an hour from 9 to10 am, covered loosely 14 acres of Sonoran Desert Shrub in the bajada of the Tucson Mountains, the temperature was about 55 F, under an overcast sky. I logged 24 species plus one unidentified Vireo.