I am preparing powerpoint slides for a talk to the Docents of Sabino Canyon about the beetles of their beautiful park. The canyon begins on the desert floor and eventually reaches up the highest elevation of the Catalinas at above 9000 feet. Few hikers will follow it that far, but most of it know how to connect with it again after driving up Catalina Highway. Theoretically, this vertical expansion over many different types of vegetation and habitats could allow us to find almost all AZ beetle species right here. Even recent arrivals from south of the border often make their way here after a couple of years. Missing are of course specialists of sand dunes and some other extreme niche habitats and the northern much populations that are more connected to Utah and Colorado than southern AZ. So my talk about Sabino Canyon Beetles will very much be an introduction to Arizona Beetles in general. 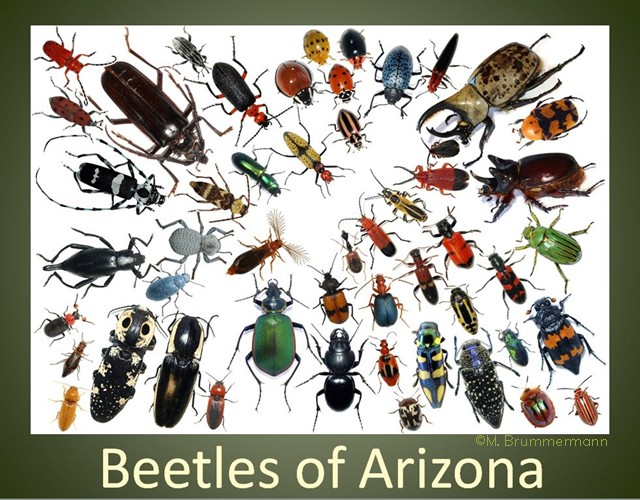 After posting this title slide on Facebook, I got many requests for prints. I don't really do mass produced posters. Instead,  I am offering a special  limited edition of giclee prints size 20 by 34 in. These frameable prints are printed on heave acid free paper with archival pigment ink. I am offering them for a limited time to my naturalist friends at $60, which is way below my normal price rate. 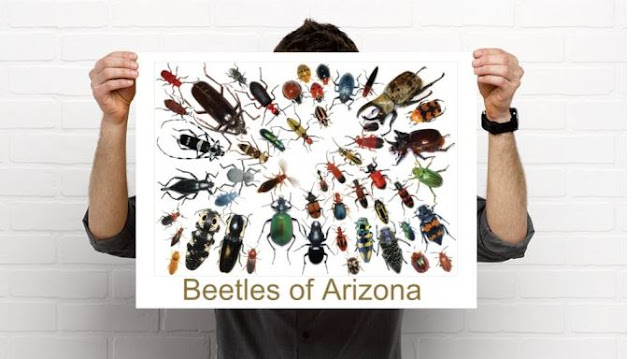 I got so many requests for posters that I inquired into having them printed: This 18 by 24 in version will cost $20 plus shipping in a tube. I'll order them if I get at least 10 orders.

Update: I have more than enough orders, so if you'd like one, let me know soon so you get included. email me mbrummermann at comcast.net
Posted by Margarethe Brummermann at 7:12 AM 2 comments:

The patience of snakes 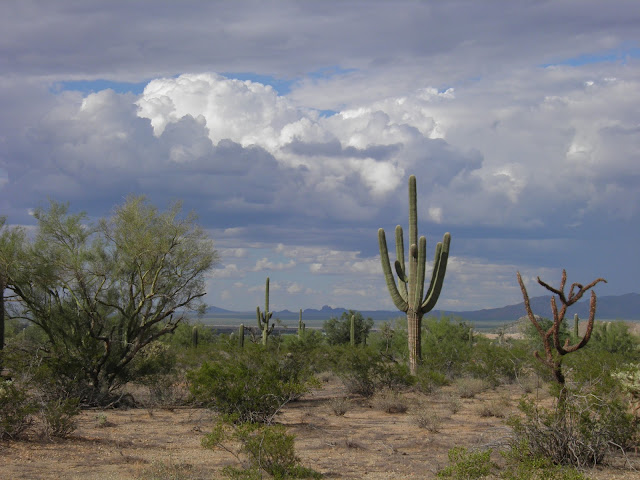 It's snake weather again. Each year, our rattlers show several bursts of activity. One is beginning now at the end of the monsoon season after a few good soaking rains. Diamond Backs even have a second mating season in fall. So every evening Frodo, our snake barker, announces his sightings on and around the patio. 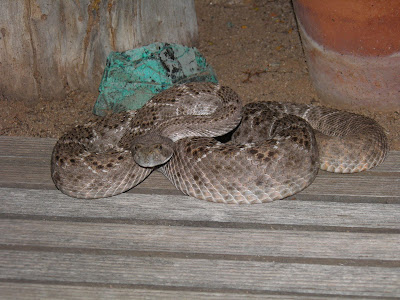 Yesterday I heard a loud buzz when the dogs were running up to get their dinner. A big Diamond Back was curled up in their path, looking somewhat annoyed, but sat quietly while the dogs were being fed 10 feet away and then let into the house. He then moved on, too. Go, get those packrats! 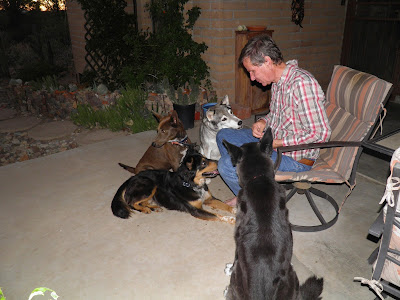 This morning we walked into the state land right next to our place, happy that for once we heard no 'puff puff puff' noise from the guns of dove hunters. But we aren't able to pay enough attention to two things at once. On the way back I nearly stepped on a curled-up Sidewinder with Randy's tracks firmly imprinted on both sides and Bilbo's nearly touching the snake's body. That had been very close. 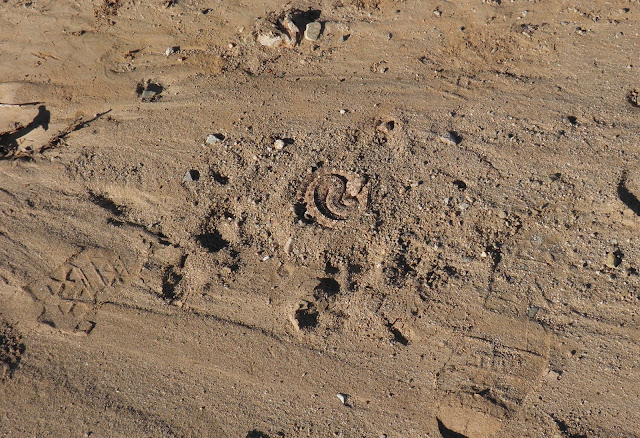 Temperatures in that sunny spot were approaching the nineties by then. Nevertheless, the snake was tightly curled up, snuggled in and keeping a low profile as only Sidewinders do. I thought that he'd soon be too warm, so he'd probably be close to moving on. I had not seen the 'side-winding' motion and was determined to make him demonstrate it. Camera in one hand and a thin, dry creosote branch in the other, I tried. Gently. No reaction. 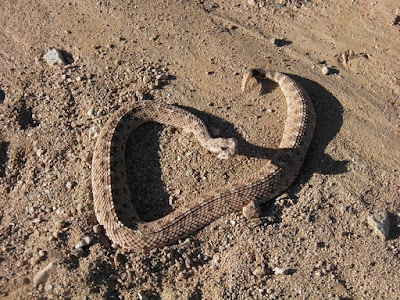 A little more forceful. He acknowledged me with a flick of his tongue. I pushed the stick under him. He turned out to be much easier to flip than a pancake. I unraveled his coil, admired the small, perfect rattle, he just gave me a look. 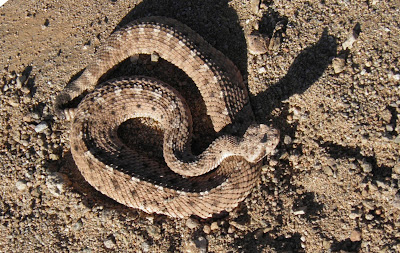 I felt more and more guilty about disturbing his peace. I moved him back to his favorite spot, tucked him back in and rearranged his coils. Not quite right, he sighed and perfected it himself. 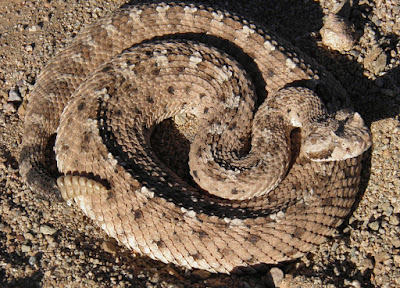 I apologized for disturbing him so rudely. I still haven't seen a Sidewinder side-wind. He dozed off for another hour or so.
This blog has links to 2 videos on flickr. Please click on the orange highlights in the text to see them. And trust me, while clumsy, I was gentle.

Posted by Margarethe Brummermann at 11:26 AM 3 comments:

Chemical messages of Soft-winged Flower Beetles are still not understood

Our Mesquite trees are blooming for the second time this year. Among the insects drawn to nectar and pollen are colorful little Melyrids (Soft-winged Flower Beetles) probably of the species Collops quadrimaculatus. The whole genus is in need of revision, so who knows.
The larvae of Melyrids are predatory. Several species live under bark and prey on wood boring insects. Adults feed on pollen, nectar, but also other insects or their eggs.

I've even seen Collops grab prey from crab spiders, and I often find them lurking around the webs of cribellate spiders.
These observation raise the question how these soft little guys can dare to be so bold?
Vivid aposematic (warning) colors seem to indicate that they are distasteful or even toxic.


In addition, when disturbed the beetles can protrude red vesicles from the sides of prothorax and basal abdominal segments. But so far, attempts have failed to show that  predator deterrents are either on those pouches or are released from them. 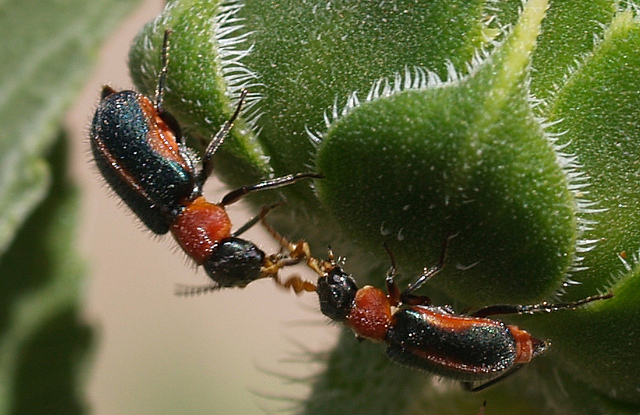 Now to some friendlier aspects of chemical signals: In males of the genus Collops several basal antenomeres are greatly enlarged. I have watched a male approach a female and present his vibrating antennae for her inspection, touching them to her antennae and sweeping the knobs across her head and pronotum. It looked as if he was maybe releasing pheromones towards the chemoreceptors on her antennae. Some literature suggests that he might release a substance that she would lick - which would make her receptive to his advances. In the case that I watched, she was not interested. He kept waving his antennae at her very persistently, but she eventually walked off. So my observation does not allow to decide whether he presents just pheromone communication or offers gifts and treats.
Posted by Margarethe Brummermann at 11:46 AM No comments: