The other Spider Wasp

When I think of spider wasps, usually the big Tarantula Hawk (Pepsis or Hemipepsis) comes to mind first. They are the most impressive members of the family Pompilidae or Spider Wasps. Huge, colorful, rating three out  of four on Justin O. Schmitd's pain index scale ...and we have many more species of the same family here in Arizona. I am finally learning to recognize them by their sturdy shape and the spurs on their hind tibiae, even when they are not dragging their name-giving prey around.

When caught and stung, the spider is paralyzed by the wasp's venom. The adult wasp will not feed from its prey but store it in a hole, dug by the wasp or often even by the spider itself if she was ground-dwelling. The solitary wasp will lay one egg on the spider and over time the wasp larva will develop, slowly eating the paralyzed spider alive. The wasp larva will then pupate and later emerge from the burrow as an adult.

Most primitive Hymenoptera follow this pattern. Provisioning the larvae with a nectar/pollen mix as practised by bees and some wasps is considered a phylogenetically higher development, as is the cooperative raising of the brood by several or many related females in the social wasp, bee and ant species.
.
Like the Pompilidae, wasp in the family Sphecidae (Thread-wasted Wasps) also provision their brood with paralyzed prey. Every species in this family targets its own very narrow range of  prey species. In an earlier blog I have described the two closely related Chlorion spp., the Steel-blue Cricket Hunter and the Cyaneus Roach Hunter that are easier to identify by their prey preferences than by their looks.

As a family Sphecides (Thread-waisted Wasps) can be easily recognized by the extremely elongate and thin waste, or petiolate abdomen, that all member-species have in common. It provides the wasp with the flexibilty to bring the stinger at the end of the abdomen forward to sting the prey insect that she is holding with her long legs.

While some Sphecids like Ammophila build rather simple ground nests that they close by pushing sand over the opening with their foreheads, others, like Isodontia (Gass Carrier Wasps)  close the entrance with a plug of specially collected grass cuttings. 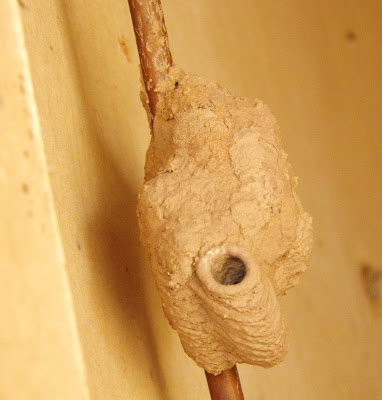 Other family members build far more elaborate structures. Last winter, Randy and our friend Frank watched a wasp flying repeatedly into the water heater cabinet on the side of Frank's house. When they finally told me, the wasp was gone but a cluster of mud cylinders, one of them still open,  was attached to a waterline. To my relief it was the line that feeds the swamp cooler, so the young wasps were in no danger of being cooked alive when Lyn and Frank were taking a hot shower.
I kept visiting the nest ever now and then, planning to eventually wrap it in gauze to catch at least one of the inhabitants.
From December to March nothing happened. 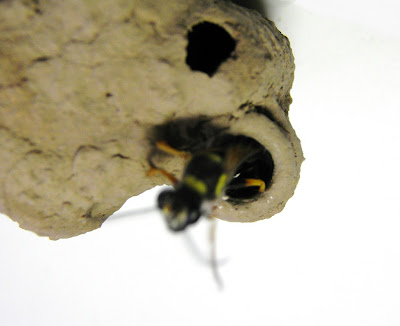 In mid April (yesterday), there was suddenly a second hole in the clump of hardened mud, and something seemed to be going on in the cylinder that was always open. When a slender black and yellow wasps suddenly emerged I wasn't prepared and only got a very blurry photo before he disappeared. By now I sensed that things would quickly begin to happen in the other chambers, too, so I removed the whole nest carefully and brought it home (to our bedroom where the light is best).

I heard buzzing from at least two chambers. I now see that I positioned the nest up-side down, that may have aggravated the kids. The noise made me wonder: to buzz like that, they must be already clad in a well-hardened exoskeleton. No wonder Number One had made such a fast exit. But now I was ready.
Soon moist spots appeared where two cylinders were plugged with concrete-hard mud. Next a pair of mandibles pushed through and cut out a circular area which then fell outward. The head showed, the front legs, and seconds later the whole wasp emerged: A  Black and Yellow Mud Dauber,
Sceliphron caementarium.This one took off right away, too.

The next one allowed me to get my little camera ready for a short birthday video with sound:

Here is a link to the flickr version of the same video. I think the quality there is somewhat better than the blogger-direct-upload and not as cluttered as u-tube

Removing the sidewall from the now empty chambers I found the empty, parchment like pupal exuvia and a single spider leg. A female Black and Yellow Mud Dauber catches spiders of many different species to stock the nursery before she lays one egg in each cylinder.  There is another, related Mud Dauber that preys mainly on Black Widow Spiders. Our healthy young wasps had finished all their provisions before they pupated. 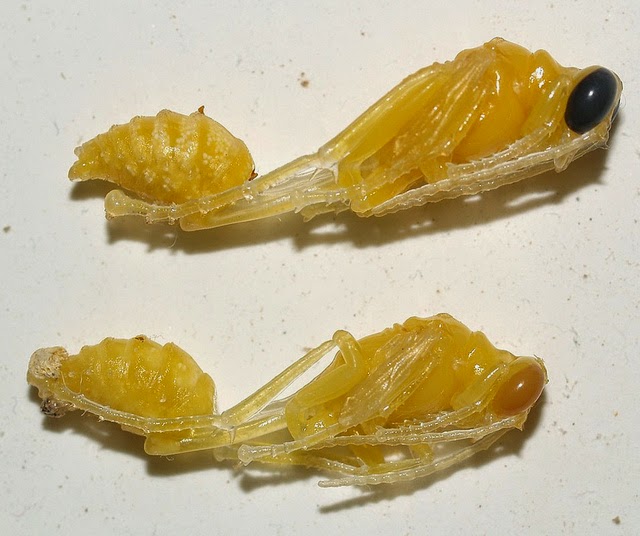 I am very grateful to Gary R. McClellan for allowing me to use his images of a Black and Yellow Mud Dauber nest that he opened before the wasp larvae had eaten the spiders. The photos clearly show the variaty of spider species in the wasp nest.

Atkins versus High Glucose diet:
While the growing larvae needed to build up their bodies and hence lived on a high protein diet, adult Mud Daubers need fast burning calories for their high energy flight muscles. Their live now centers on finding a partner, building a mud house, and hunting. To support this lifestyle they are nectaring on flowers, especially on those easily accessable ones of the parsley and carrot type (Umbelifera). For lack of any wildflowers I offered Lantana to our kids, but they didn't like it at all and buzzed off. There are always our hummingbird feeders...


P.S. The first time I saw a Mud Dauber actually collecting mud I was watching dragonflies at a pond on Fort Huachuca. That was when it was still open to aliens like me. Here at home in the very dry bajada of the Tucson Mountains, I had never seen any wasps of that genus. But some years ago, Frank put in a bird bath that is always overflowing and creates a little mud puddle while also feeding one of his huge mesquite trees. The wasp found this mud source and began building her nest not far from a porch light that attracts hundreds of moths and consequently spiders at night. In the morning I often still find spiders hanging around. They need to watch out! 7 new Daubers are on the prowl and they tend to establish nests in the same place where they hatched.