It always pays to watch the competition 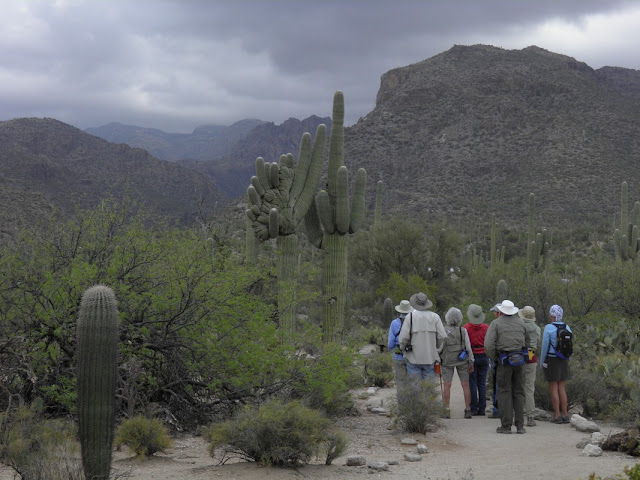 Yesterday, when I arrived for the weekly nature walk of the Friends of Sabino Canyon the temperature was in the fifties. Much too cold for mid-April morning in Tucson and too cold for most insects and lizards that I wanted to see. In addition, a fierce wind was howling down into the canyon from the Catalinas. The other naturalists decided to look mostly at plants, I guess because those can't hide from the elements. Two saguaros, one with an imposing crest, looked indeed positively defiant.

But I don't get to Sabino often enough, so I was going to give Esperero Trail a try because that's where I had seen the beautiful Eastern Collared Lizards last year. The trail leaves the main canyon and winds up the mountain side with full exposure to the western wind gusts. It seemed like a dumb idea but I am stubborn and in Arizona the sun usually breaks through eventually.

Well, it didn't and there seemed to be very few living things willing to share the exposed mountain side with me. Until I came to some part of the trail that rose somewhat over its surroundings resulting in a low but pronounced hill top.

There was a big Ash-throated Flycatcher busily swooping from his perch as if catching - flies? Sure enough, even in this abysmal weather some Bee Flies, Tachinids, Robber Flies  and even some butterflies (Tiny Checker Spots, Marine Blues) were hill-topping, a behavior that is typical for many flying day active insects.

Males had staked out little territories, patrolling back and forth, chasing everything that flew by, driving off other males and trying to mate with passing females. I think I understand why the big collared lizards and the flycatcher seem to prefer this exact area. It's the place where they can be sure to find enough prey. Of course the ectotherm lizards had the luxury to take the cold day off while the endotherm bird had to keep working, especially as he was feeding nestlings that I could hear keening in a Saguaro hole. I followed the bird to an especially exposed area with some bare boulders where he seemed to concentrate his efforts.

At first I payed little attention to a big black fly that landed as if to bask in one of the sparse sunny spots because I mistook it for a Mexican Cactus Fly, a common syrphid. But then I heard a very deep basso buzz when the fly changed to another boulder, only about 5 m from the first. That sound is one of the loudest and deepest flight noises I've ever heard here in Arizona - not easy to forget. Through my new little Papillon binoculars I could also verify that the fly was not all black but had silvery grey flanks - a bot fly in the genus Cuterebra. (Later identified by Jeff Boettner as C. austeni)

This is only the third time that I encountered these big, fascinating insects. Some people may feel that the live history of bot flies seems like an episode from the X Files or the movie Aliens. I think, however, that the film makers borrowed their ideas from the biology of these flies whose larvae are mammalian parasites.

While some bot fly larvae develop in the alimentary tract of mammals, the big black and grey Cuterebra that I was watching yesterday belonged to the group that develops subcutaneously in mammals. Luckily they are quite species specific in their host choices so I knew that I wasn't the target - the host would most likely be a rabbit or a pack rat.

The female fly will lay hundreds of eggs in rat runways. Only a few of the larvae will actually find their way into a passing rodent.There it will develop rather quickly feeding on the body fluids of the rat that this irritation draws. Inflammation and pain are controlled by the larva and the wound heals very quickly as soon as the guest drops out of the host to pupate.


The only bot flies likely to infest humans do not occur north of Southern Mexico. As I mentioned, the deep characteristic buzz of the big flies is rather recognizable and would probably warn the victim of an intended egg drop. To give their larva a chance to find their way into the body of a wary primate, female bot flies in the genus  Dermatobia  have an amazing strategy. They capture another insect like a mosquito, horsefly or tick that is drawn to warm blooded mammals for its own reasons and attach a load of their eggs to this carrier. When the released  mosquito later lands on a primate for a blood meal, the bot fly eggs hatch and the young larvae bore into the warm skin of the doubly victimized monkey or human.

While feeding from the host subcutaneously for several weeks the larvae have to behave reasonably well. They seem to prevent inflammation even though they need to keep a hole in the host's skin open to be able to breath periodically. They probably have anti inflammatory and antibiotic capacities. I have two good friends who both got parasitized in Central America, are now in their eighties, and live and love to tell about it. If not removed prematurely, the larvae will eventually leave the host, drop to the ground and pupate. In time a new generation of mature adults will hatch. These big flies are born without mouth parts. From their time as maggots in the flesh, they are provisioned with enough energy reserves to survive for about 10 days, time enough to start the cycle again.

Yesterday's bot fly, however, is not going to propagate his genes this way. Instead he is contributing them to conservation biologist Jeff Boettner's research project at UMASS - Amherst. There are many open questions concerning host relationships and phylogeny of the group. As specimens are difficult to obtain, Jeff would be grateful for specimens and info about lek sites. Here is a link to his info pamphlet.
Here is a link to photos of the removal of a human bot fly larva (Peruvian Amazon)
Classification:
Arthropoda (Arthropods) » Insecta (Insects) » Diptera (Flies) » Calyptratae » Oestroidea » Oestridae (Bot Flies) » Cuterebrinae (New World Skin Bot Flies) » Cuterebra (Rodent and Lagomorph Bot Flies)
Posted by Margarethe Brummermann at 10:54 AM