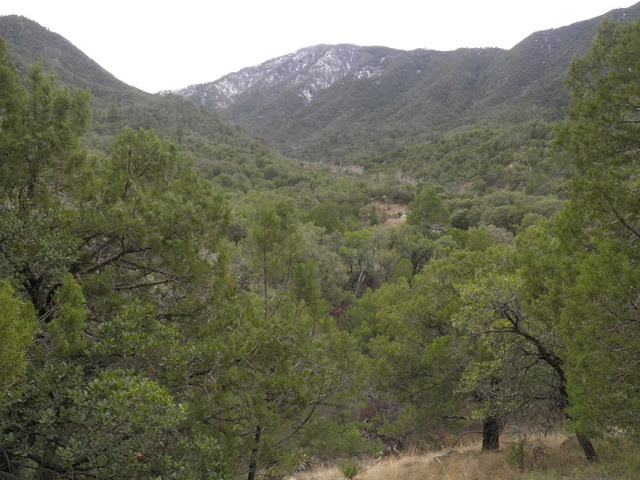 I went to Madera Canyon today. With snow on Mt Wrighston and an overcast sky, not many insects were active.

I found a few tenebrionid beetles under rocks and this Western Leaf-footed Bug under a loose patch of Sycamore bark.

But I wasn't realyy in the canyon to look for bugs, I needed to get some soil from home for my 3 Strategus cessus grubs that seem to have a hard time deciding to pupate. I also had to find some rotting oak logs to feed 9 Strategus aloeus grubs that are huge by now and the Dynastes granti grubs that are finally beginning to hatch. But their story will be a different blog chapter.

In our dry climate a lot of wood decomposes through dry rot. They are broken down by powder-post beetles, fungi and termites and there never is the moist brown wood pulp that my scarab offspring supposedly needs. But moisture does collect in stumps that remain upright. Soon the wood in the center of the stump softens and crumbles and additional organic material gets trapped. This is supposedly the cradle for many species of beetles.

When I pushed against one of these stumps, this one was oak, it came off the ground easily. It was completely hollowed out. Only a pile of mulch remained where the center had been. Mixed with it were the shiny remains of several insects. 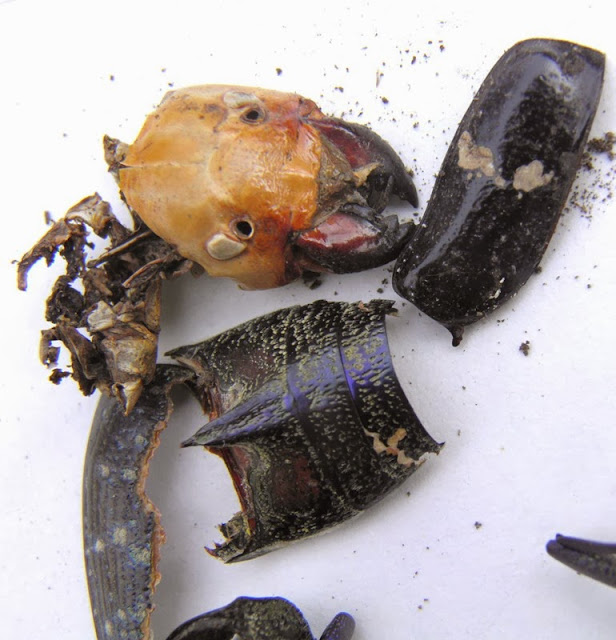 Sorting through the debris, I found parts of the elytra, the pronotum and some sternites of a buprestid beetle. There was just enough to deduce that it had been a big female of the blue footed Lampetis webbii. The pieces in the bottom left corner belong to this beetle.

A single shiny black elytron with a light band ( upper right) indicated that a scarab in the genus Gymnetina had died here, too. I have seen Bill Warner and Pat Sullivan look for theses beetles in locations just like this because the beetles are known to deposit their eggs in stump hollows. I usually see the adults flying high out of reach and I still don't have any good images with natural background.

The third is a big head capsule, top left. At first I mistook it for the head of a beetle larva because of the huge biting mandibles and the simple small eyes. But the larvae of the big boring beetles don't have heads like this and the holes in front of the eyes clearly indicated that this insect had a pair of well developed antennae ...

BugGuide and my well chosen group of facebook friends solved the mystery quickly: a Jerusalem Cricket was also buried here.

Now I can speculate what kind of drama happened here. Are the beetle parts remains of females that oviposited and then died of old age? Or were helpless young beetles killed while they were waiting in their pupal chambers for spring to arrive?  Was the Jerusalem cricket the culprit?

Posted by Margarethe Brummermann at 10:30 PM