A couple of weeks ago we received a new tag for our second youngest dog, Bilbo. To our surprise he will be eight years old in October 2014 according to the paperwork. Can that be? We still call him and Frodo 'the puppies'.

In December of 2006 our three older dogs, Tana, Cody, and Laika, had firmly established their pack and territory when they found two backpacks at our fence with the State Trust Land. Someone had gone out of his way to hide them there in a the place far away from any road or trail. Anyway, I heard loud squealing and found that Cody was roughly grabbing one of two small puppies that had been left out there with a little food and water. That afternoon we were about to drive to Tempe to set up my art booth for a three day show. No time to take care of puppies. So we called the sheriff. But in the meantime the male puppy ran away, probably because Cody was so aggressive towards him. The sheriff arrived and sat in his car with the female pup, waiting for the arrival of animal care officer, meanwhile fell in love with the pup and convinced his girlfriend to adopt her. We all searched for her sibling until we had to give up because it got dark. At night while we were setting up my tent in Tempe the  temperature fell to a rare 19 Degree Fahrenheit. We couldn't stop thinking about the little guy out in the cold with only our resident coyotes for company. Randy drove back to Tucson in the morning. The pup had come back to his backpack! 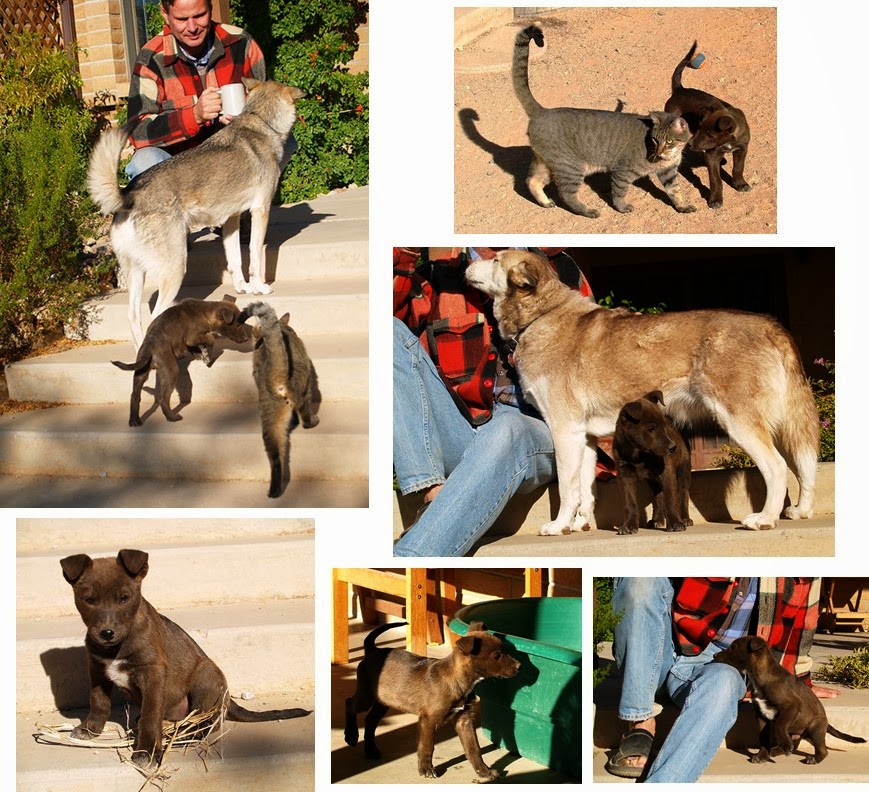 When I came home three days later, the tiny dog was 'quarantined' in the old goat pen, living in what Randy called an igloo. To me the little structure of cardboard and blankets looked more like a miniature Native American sweat lodge. The pup was smaller than our cats, too short to drink from the cattle tank that the other dogs use, too short for the steps to the patio, too short to climb in Randy's lab, and short enough to walk underneath Tana, who had the shortest legs of the bunch so far.

But even though one of his legs still showed an ugly bump where Cody had grabbed him, the little guy was ready to join the pack!  And the three older ones did tolerate him now under Randy's supervision. Their tails were still raised tensely and Cody wrinkled his nose, but soon enough the new kid joined the fun. 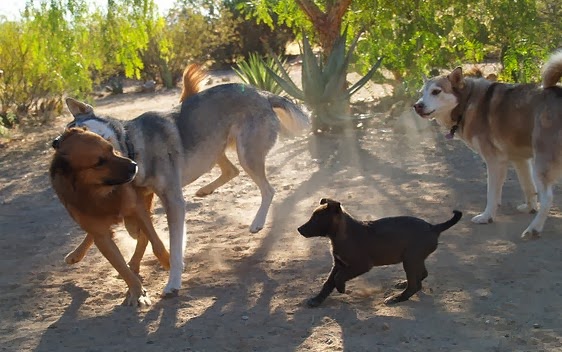 In 2006 Cody and Laika were still quite young and very much into rough-housing and wrestling. But when the dust cleared the pup was usually still (or again) on his crooked legs with those over-sized paws ... Tolkien's description of a Hobbit came to mind, and so 'Bilbo Baggins' it was ... The 'Lord of the Ring' movies came out some time later, but people who ask for his name still don't understand the reference.... it must be my accent.
Another question always comes up, but remains unanswered: what breed is he. When I take him with me to art shows, he is very much  admired. He really is a good looking dog: The floppy ears finally stood straight up and the bow-legs stretched. He stopped growing at about 40 pounds. The coat is a rich brown with a slight hint of a ridge on his back, and he carries his tail in a nice curve. He is muscular and elegantly proportioned. At four years old his voice broke, so he doesn't really bark anymore, but he can howl with the best and makes low growling pleasure noises when he roles and wiggles to scratch his back. He is crazy about cattle, but he is no workaholic herder. He doesn't resemble any breed I know, but he looks like the ultimate, classical dog. You can find his likeness in frescoes of Egyptian pyramids, in Roman sculptures, in depictions of Australian Dingos and in kids drawings.

Randy calls him the motor of the pack who drives the others to run and play. Laika encouraged this from the beginning: when Bilbo was still tiny, she rolled over for him whenever he grabbed her throat, so they could play even though her wolf-legs were more than twice as long as his.

But his best friend was Tana: they spooned in her bed when it was cold, and every morning he thoroughly groomed her face. She had developed a wart on her forehead, a common skin problem in huskies. It was unsightly but harmless, so we hadn't done anything about it. After some time with her new groomer, the wart shrank and disappeared. 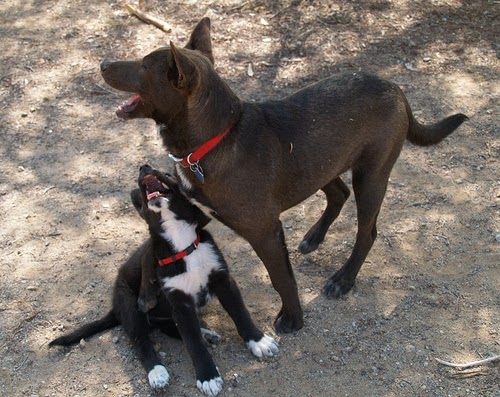 Bilbo didn't get to spend a lot of time as the spoiled youngest kid. In February of 2007 Frodo was born in a den in the desert, and three months later he joined the pack. For a short while, he looked up to Bilbo as his admired older brother, but very soon they became partners in crime: equals when it came to chewing shoes and pillows, un-potting lettuce plants, uprooting cacti, and terrorizing the cats. 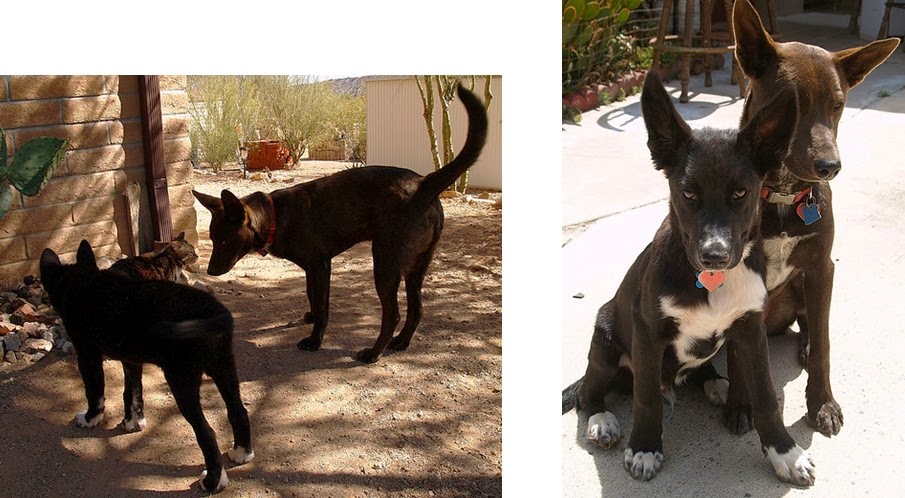 We quickly learned to always keep one of them leashed during our walks, or we would have to wait at least half a day for them to come home. Together they would visit all our far-away neighbors, sit for hours with the cattle in the state land, drive squirrels into chollas, dig for lizards, flop down in puddles ... but they always eventually showed up together, happily panting and in time for dinner. 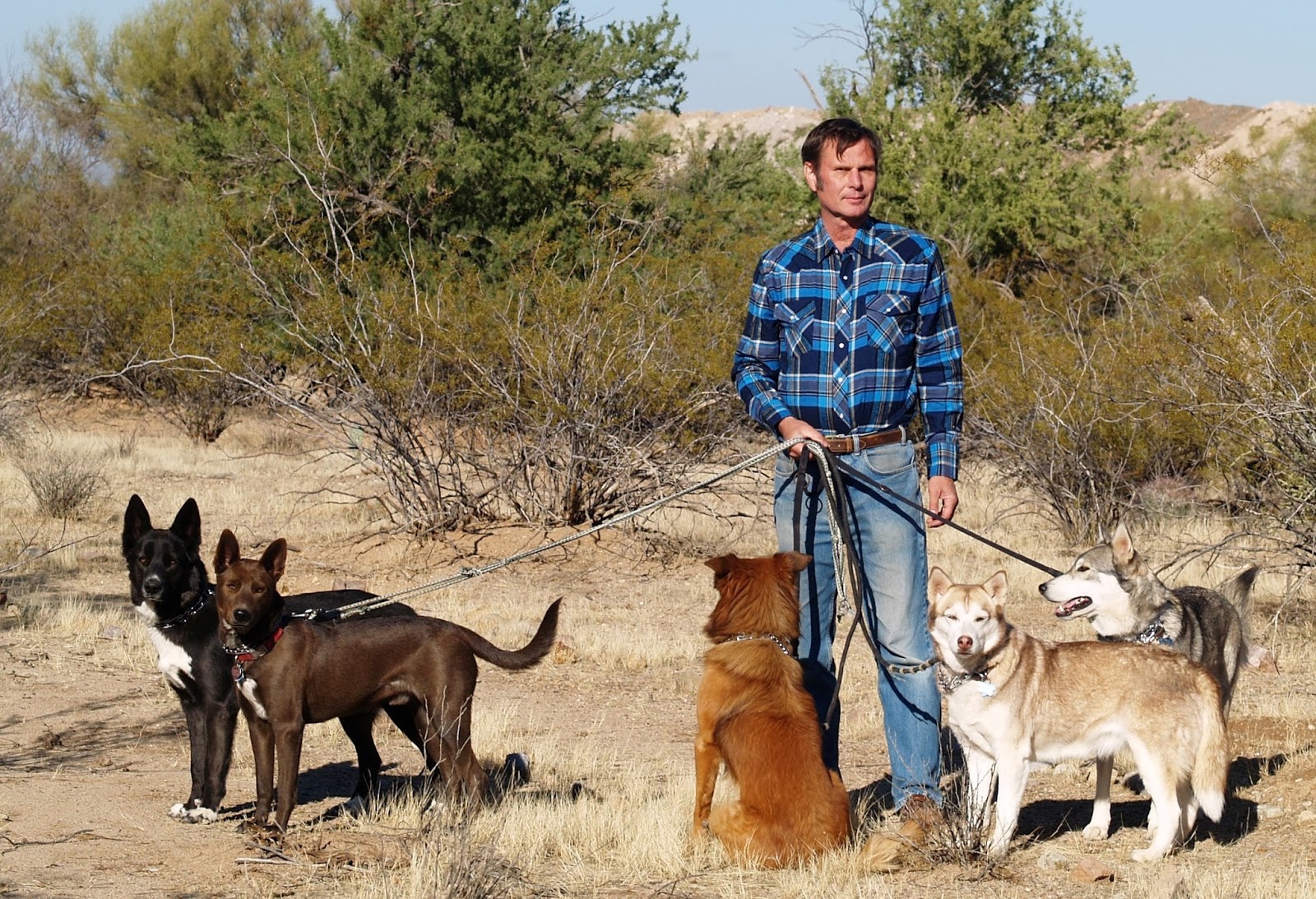 So Bilbo and Frodo became, and still are, simply 'the pups'.

The one thing that Bilbo gets to do more often than the other dogs, and without his alter ego Frodo, is booth-sitting at my art shows. He is easy going with other dogs and he likes all humans. He doesn't love everybody, as Cody might, but he is polite and entertaining and not too distracting from my art work, I hope.

Posted by Margarethe Brummermann at 9:52 PM