On January 26th, I found my first active (sort of) rattler of the year at the Santa Cruz River Path in Marana, Pima Co Arizona, USA.


When I was walking my 4 dogs, camera and binoculars around my neck, a lady informed me of a run-over little snake just ahead. I said: 'run-over on this path, what a pity'. She responded 'I'm only telling you so your dogs won't freak out.' When we found the little rattler it was stretched out and quite stiff, but seemed unharmed. He was obviously cold and trying to warm up on the sunny pavement. Only a little over one foot long he had already accumulated several rattle elements. By the way, it's a myth that one can tell the snake's age in years by the number of those.  After a little coaxing with a piece of straw the rattler woke up, buzzed indignantly, and moved out of the bike path. My 4 dogs were staring at him with too much interest and too little fear for my taste. 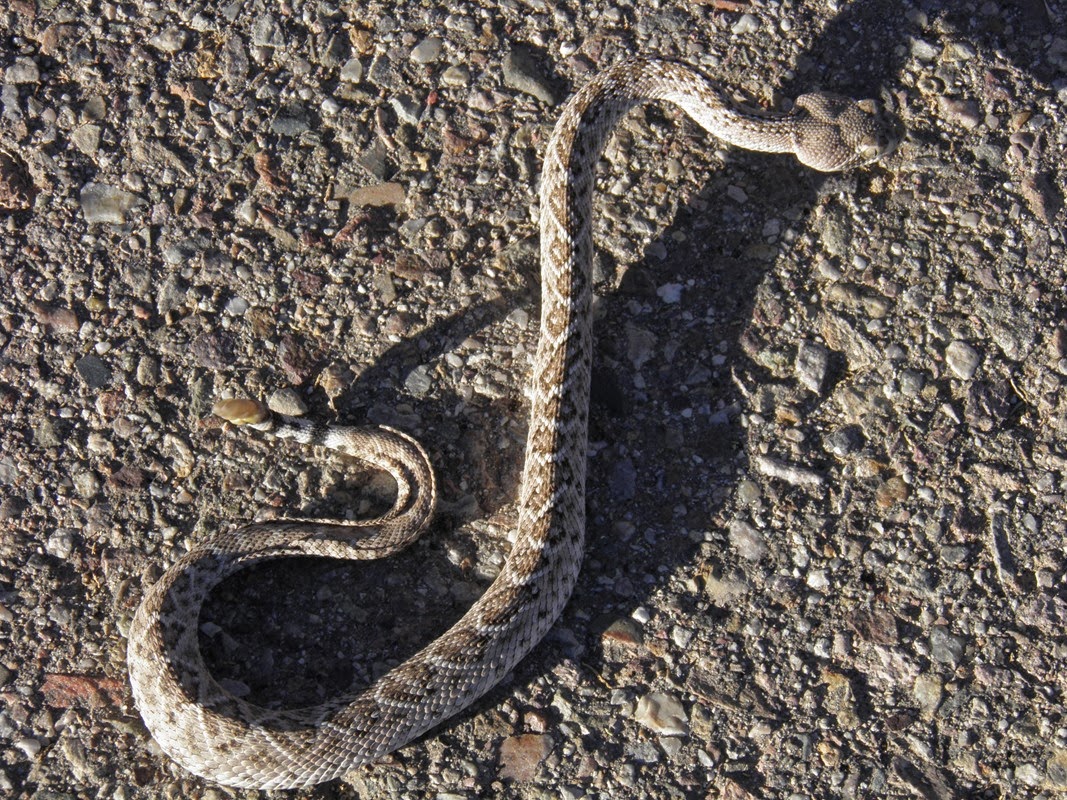 Check out how his winter weight-loss shows at his tail-end: his skin is throwing two big folds there.


When I posted the story on fb, someone remarked that this might be a Mojave Rattler, and I think that is possible. Going back through my earlier slides, I found that there were always a few among all the Diamondbacks that I photographed. It's not too difficult to tell them apart conclusively, but you have to take a closer look at them than I sometimes do. Here is a link to a blog written when I did.


On the same walk we saw two Northern Harriers, both gold-brown, a Red-tail, a Cooper's, the territorial Kestrel, a group of Lawrences's Goldfinches,  a Belted Kingfisher, several Abert's Towhees, some Mallards, and flying overhead, two clouds of thousands of birds. The first cloud consisted of sparrow sized birds and I couldn't tell what they were, the second was made up of Blackbirds, mostly yellow-headed, and grackles.A lonely Monarch was fluttering among the willows along the river.
Posted by Margarethe Brummermann at 9:44 AM