Ten days ago, Frodo, our youngest dog and son of a feral coyote half-breed got his fourth snakebite in as many years. He started his snake encounters as a tiny pup. To him, most bites do not seem much worse than a nasty bee sting, hardly interrupting his play. This time however, he was distraught enough to leave his breakfast to Montana the Husky, so we took him to the vet, just in case. When we got there his hugely swollen head was already returning to normal (I didn't have the heart to document his misery on film) and all he needed was an antibiotic and a painkiller. Presumably all four bites were administered by Western Diamondbacks. Two of them we caught just after the attacks. 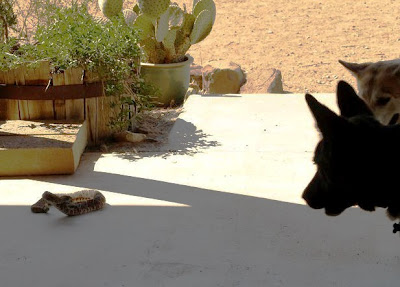 Frodo, Tana and a day-time visitor. Nocturnal ones are much more ominous.

Three days ago, at four in the morning, the snake alarm went off again: Frodo’s sharp rhythmic barks. All three outdoor dogs were pointing at a snake from a save distance this time. I’d just returned from an exhausting two day field trip the evening before. Getting out of bed and keeping my eyes open proved rather difficult. The first attempt to noose the snake with the snake-stick failed. The sudden notion that this was no ordinary Diamondback, but probably a Mohave Rattler gave me enough of an adrenalin boost to reopen the noose and place it safely this time. By then, Randy had arrived with the transport bin. The snake securely stored, we went back to bed. 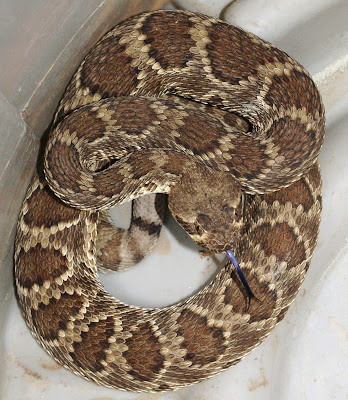 Mohaves are rare here. Some 15 miles further south the herpetologists of the Arizona Sonora Desert Museum have been keeping records for years, and they never got anything but Western Diamondbacks. 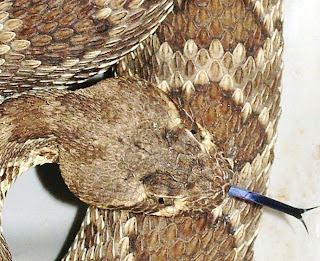 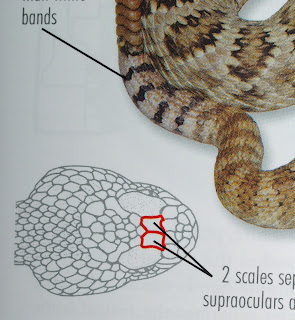 When I mentioned a Mohave Rattlesnake in one of my earlier blog chapters, some readers correctly pointed out that I couldn’t be completely sure of the identification just by looking at the relative width of the tail-bands alone. So while I’m still not getting close enough to a rattler’s head to count the scales between the eyes, this time I took some pictures to enlarge the details later. Yes, it’s clearly a Mohave Rattler Crotalus scutulatus. Where this one has two big scales, the Western Diamond-backed Rattlesnake Crotalus atrox has a row of 4 or more small ones. 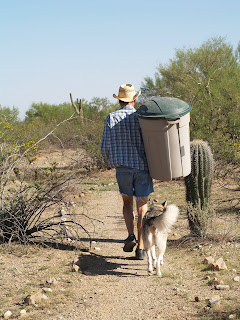 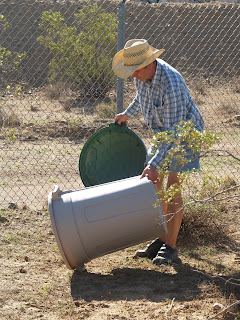 Thinking about the possibility that this snake is not only producing hemorrhagic venom (which is bad enough by itself) but also a more deadly neurotoxin, we felt our resolution to simply remove snakes from the premises waver. But finally Randy carried him just especially far away from the house to an out-of the way part of the State Trust Land and the border of an old lime-stone quarry. Laika, our wolf-dog, trotted along on his heals. When he released the snake she respectfully stood aside. She’s much too smart to get too close to any snake that she’s aware of. 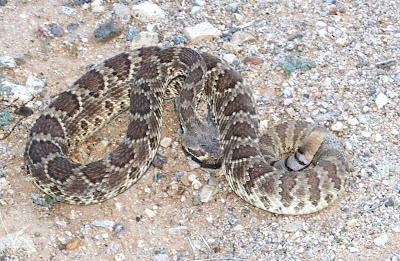 Note the wide white bands of the tail, another characteristic of the Mohave Rattler that is less reliable but easier to see than the facial scales.
Posted by Margarethe Brummermann at 9:08 PM