Visit to an Enchanted Canyon


Sunday, Aug. 29, 2010
We started up Pima Canyon very early this morning to get the first stretch of open desert at the southern flank of the Santa Catalina Mountains behind us before it got too hot. When we descended into the canyon we found it brimming with live and very much changed from my June visit. 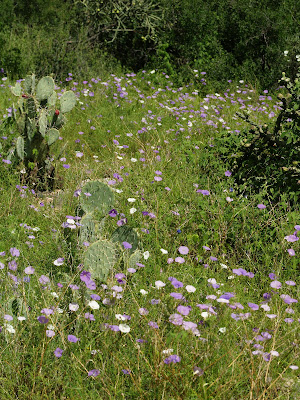 Every little meadow was covered in flowers. Unlike in spring, when golden poppies color the hillsides, more muted whites, purples and blues were now the dominant hues. 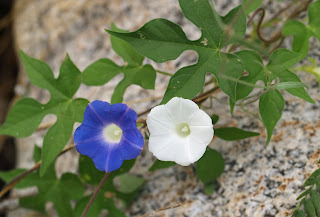 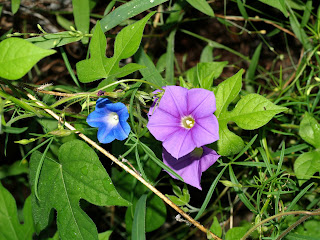 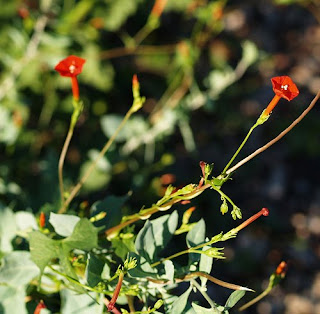 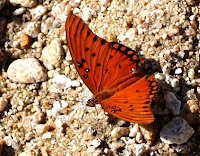 Deep orange Gulf Fritillaries betrayed the presence of their caterpillars on a wild Passiflora vine . 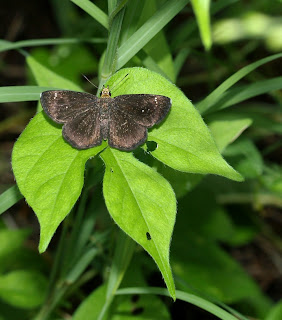 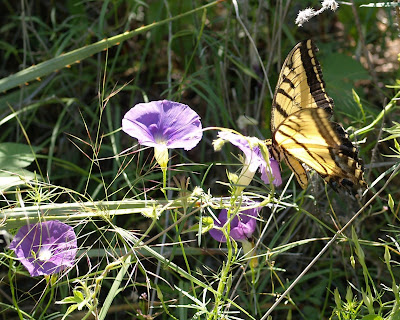 The trail was a flightpath to Giant Swallowtails and White-spotted Purples and a transit route to Harvester Ants. I tucked my pant legs into my socks one sting too late. A huge Two-tailed Swallowtail tried to land on the delicate morning Glories. 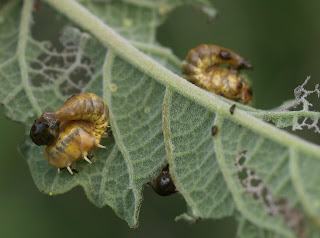 Larvae of the strangest-looking tortoise beetle, Physonota arizonae, were skeletonizing the leaves of Canyon Ragweed while holding a protective umbrella of excrement over their backs.

By eleven o'clock it became quite muggy in the narrow canyon under the thick canopy of Mesquite trees and Cottonwoods. A refreshing wind sprang up and made me find an unobstructed view of the sky: white billowing clouds were rolling over the ridge of the Catalinas from the north east. We weren't quite ready to retreat: the ascent had been too strenuous and we had come too far to give up already. 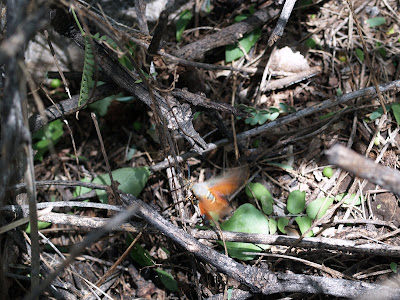 It was worth it: Just beyond the next bend of the trail I found a orange-glowing spot bobbing up and down under the bushes. 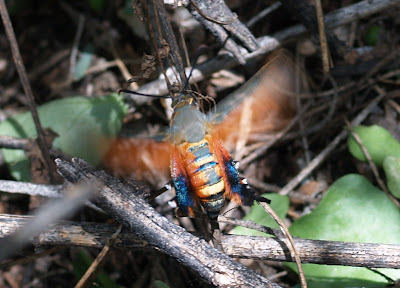 It moved like a Clear-wing but its wings were opaque. I could barely see this because their rapid beat never slowed down. 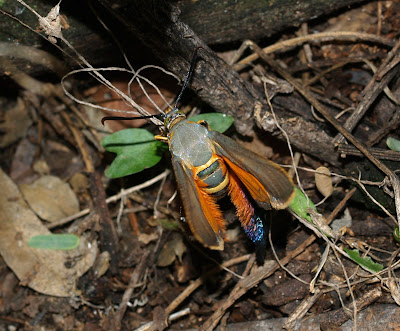 Only the stop-motion effect of the camera flash made it possible to see the details. The heavy body was banded like a hornet's. 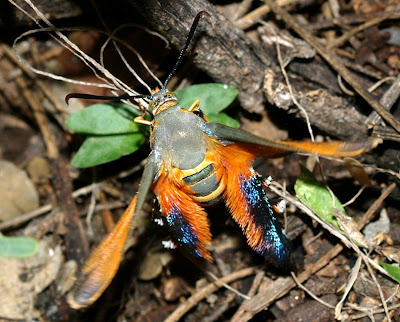 Something flashed brilliant-blue like a peacock's tail: surprisingly, the hind legs legs were heavily 'feathered' and dragged like a train. An Anchiornis of moths! 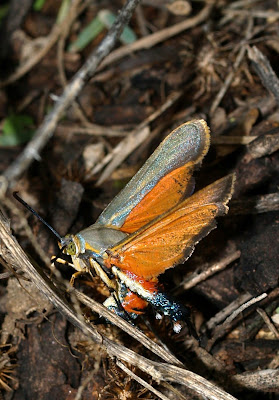 It turned out that I was watching an ovipositing Glorious Squash Vine Borer, Melittia gloriosa.
She was laying her eggs into the dead leaves under a Wait-a-minute Acacia and some dead-looking vines. I had not seen any Squash Vines during our canyon hike. Melittia gloriosa is the largest and most colorful of the melon (Cucurbita) borers found in the western United States. The larvae are known to attack the large fleshy cucurbit tubers found underground.

While I was fascinated and distracted by the moth, the first drops of rain rattled the bushes above. As I hastily made my way down the canyon it got ominously dark. At least it wasn't hot anymore. Still, the fast pace and the load of camera and water bottles had me drenched in sweat very soon. Lightning struck the north side of the canyon and thunder crackled right after it. A biting chemical smell hung in the air. 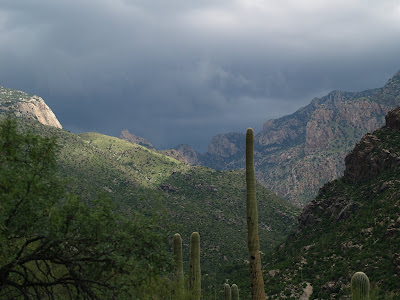 Looking back over my shoulder up Pima Canyon

Luckily the storm wasn't moving with me along the canyon, and the clouds above broke before I had to go down the last exposed part of the trail.
Posted by Margarethe Brummermann at 6:08 PM