How Beetles Saved my Life

I'm living in the wild Wild West. Sometimes my friends (never my husband) shake their heads at my insect-hunting adventures and tell me that I take too many risks. They think I shouldn't crawl through fences along highway 77 to collect Dynastes - but it's dark when they fly, who's going to catch me? 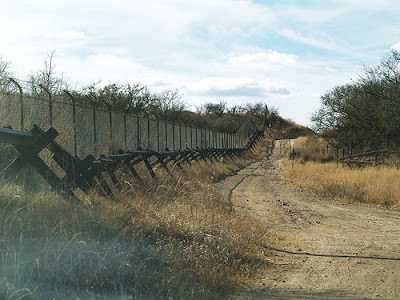 I've picked beetles from the border fence in Lochiel, but I'd never follow a bug into Mexico - I collect strictly Arizona beetles right now.
When we bump along Harshaw Road, nervous border patrol agents sometimes stop us with their weapons half drawn, but they are there to protect us, aren't they?
Sometimes I get carried away racing after some elusive bug, but so far snakes have always stopped me with a warning rattle before I got too close.
I've bought a little old truck now, and it proved very useful last weekend in Copper Canyon when we had to use a lot of momentum to cross some rather deep water. Standing water that is, no danger of being swept away.
In the mountains, I keep the cooler with some food in my truck where I sleep, but it also contains my collected living insects, and I cannot very well hang those from a tree for the bears to find.
Close to Amado, a dozen or more young Mexican men once mistook my flashlight for a signal from their coyote and came running to catch their ride, but they realized right away that my car was much too small and trotted off again.
Last year I rolled off the high bank into the water of the San Pedro River, but it was nice and clean and I managed to hold my camera bag above the water.
So, nothing to worry about.

But on Thursday July 28 in Rio Rico, some dung beetles actually saved my life 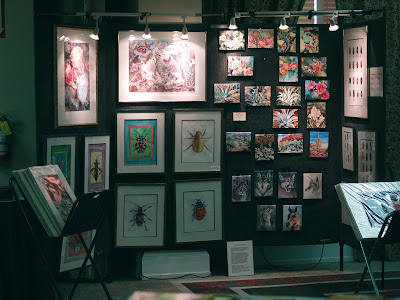 I took part in the annual SASI meeting in Rio Rico as a vendor, selling my nature-related art work. Of course, I used any free minute to go collecting in that great area.

On Thursday afternoon, I headed east on Ruby Road and parked where it crosses the dry Santa Cruz River. The sun was shining from a clear blue sky. As I walked along the right bank a cowboy was driving a heard of cattle towards a tank on the other side. Hoping for dung beetles as well as inspirations for great paintings, I called whether I could come over to his side. He said sure, but to cross a little further upstream to avoid some patches of quicksand. So I kept walking. 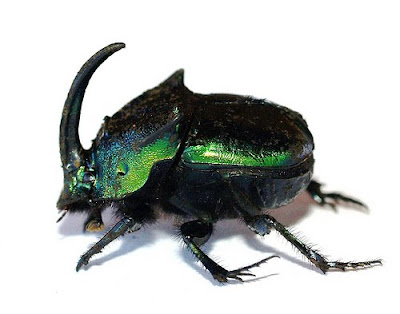 Soon I was distracted by some horse manure that was quite alife with dung beetles. Not the shiny green, horned Phanaeus I was hoping for, but tiny Onthophagus hopfneri and veltinus and horned males of Copr 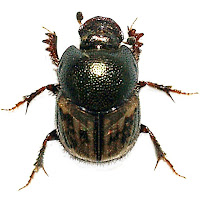 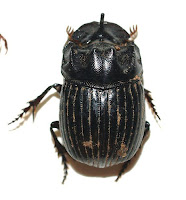 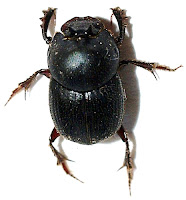 Several pairs of Canthon imitator were using their big flat heads to cut their private share from the dung pile. They formed neat spheres about half the size of a golf ball and started tumbling them away in very straight lines at amazing speed. 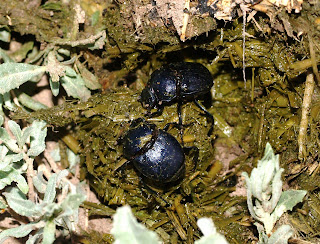 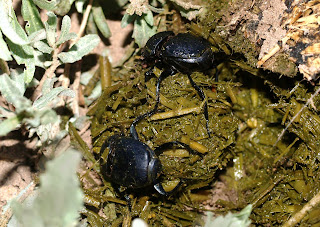 The male was standing on his forelegs using his long hindlegs to propel and control the rolling dung ball. The female was riding on top, or at least trying to, she sometimes was tumbled to the side or even under the ball, but she never fell off. In Greece, I'd seen Scarab males actually fight over their dung balls, but here in the land of plenty that didn't happen. Challenges appeared only in the form of flies but the beetles ignored them. 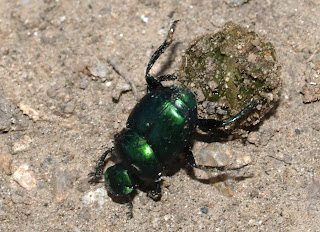 One little green Canthon indigaceus was valiantly rolling a ball all by himself and even started to bury it. This may have been just for his own food storage. 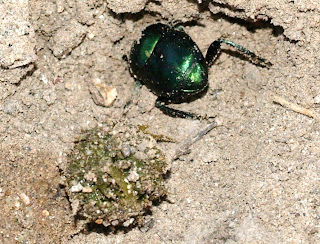 More often a pair will dig a chamber together, reshape and prepare the ball as brood-provision. They then mate underground and the female lays her eggs into the dung ball. In some species the parents stay and guard the larvae and feed them early on. This is probably the time when symbiotic cellulose-digesting bacteria are transferred from parent to larva. Seeing how many different species were interested in that pile of horse manure made me understand the advantage of removing a share from competition and predation. 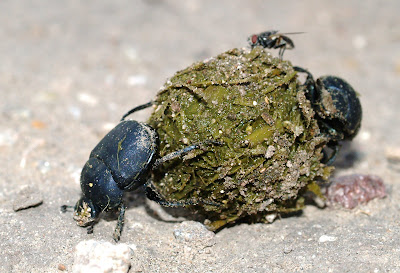 The activity of the beetles was so interesting, that instead of crossing the river I followed the tumblers around for a while. Eventually I got on my knees to get better pictures. Suddenly I heard a rustling and rumbling that quickly came closer. When I looked up, I saw first a tongue and then a wall of muddy water and debris rolling down the Santa Cruz River. 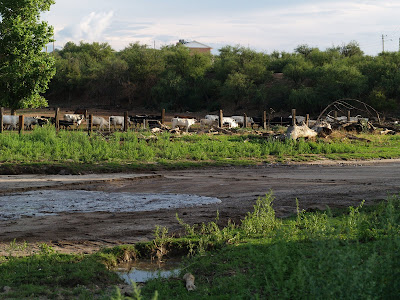 The waterfront passed me about as fast as a person could run (if he didn't get stuck in quicksand that is). Within minutes, the riverbed was filled with churning water. 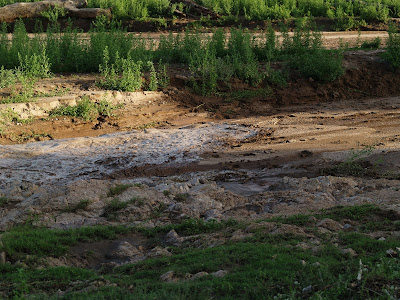 I waved at the cowboy. Maybe next time?

Of course, in the very wide and flat riverbed at Ruby Road the water would probably not have dragged me away if I had just been crossing. So the beetles really only saved me from getting muddy and smelly. 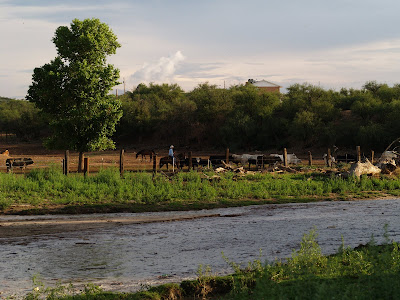 Even though there was not a cloud in the sky as far as I could see, the river rose about seven feet during the next few hours (news report. I didn't wait to find out). Flood damage was considerable on the US side because there had been no warning from Mexico where the rain was actually falling. I had definitely learned how suddenly flash floods can literally come out of the blue. 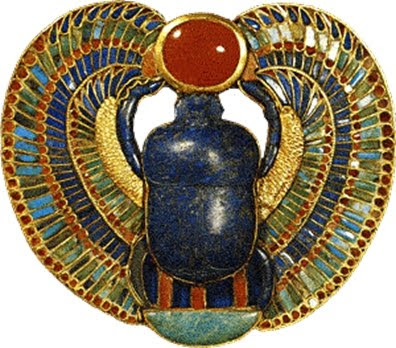 In Old Egypt the tumbling Scarab was the symbol of the sun and everlasting live...

When they are not busy resurrecting old pharaohs or saving the lives and boots of entomologists, the beetles are very important for the processing of dung.

In 2002, when we moved to our patch of desert northwest of the Tucson Mountains, there were no cattle close by. Later our neighbor introduced a herd of longhorns to State Trust Land that hadn't been grazed in decades, and at first clumps of hard dry dung were laying around like pieces of wood and accumulating. 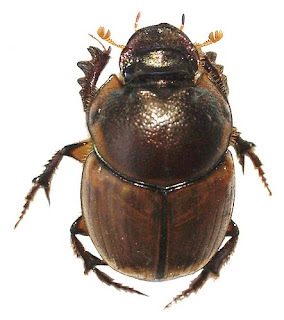 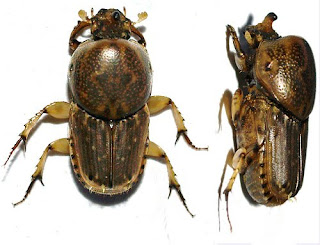 Finally after nearly two years, small Aphodines and two introduced larger species, Euoniticellus intermedius and Digitonthophagus gazella, appeared and began to break down fresh dung. But the old dry piles are still waiting to be slowly chewed up by termites. 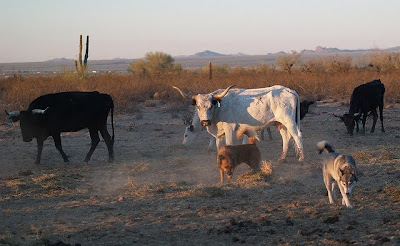 Posted by Margarethe Brummermann at 4:16 PM