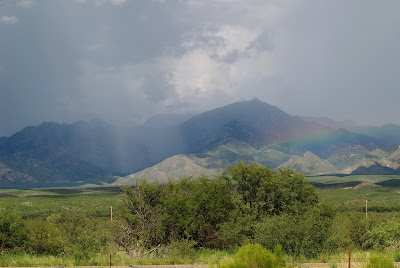 Friday, July 30st. Now the monsoon is getting serious. As I'm driving north on I 19 from Rio Rico towards Tucson, heavy clouds and walls of rain are obscuring the Santa Rita Mountains. Still, it's not yet pouring in Madera Canyon, so I decide to stop for a while. On Madera Canyon Road sand and rocks covering the pavement indicate where the washes have been running the night before.

Harsh Arizona sunshine usually tends to reduce the world to a play of contrasting light and shadows. So I appreciate the way the diffused light brings out the true colors of lush vegetation, reddish soil, white rocks and the occasional insect.

While Desert Broom grows in disturbed areas along the road, knee-high Velvetpod Mimosa (Mimosa dysocarpa) dominates most of the Mesquite grassland of the lower canyon. 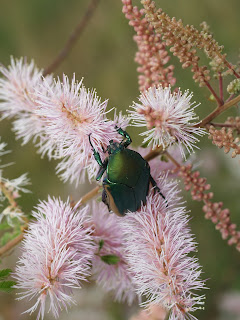 Usually the pink flower-stands are disappointingly empty of insects, seeming to leave most of the pollination to the wind. On this rainy afternoon, a green Fig Beetle Cotinus mirabilis is buried deeply in the pink cloud. 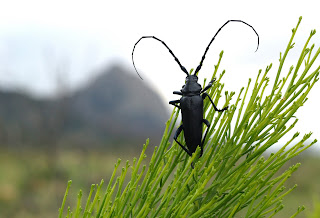 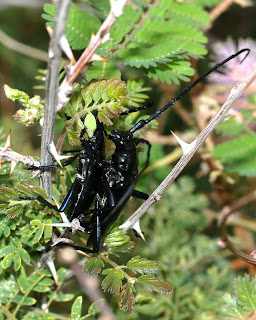 Numerous pairs of Stenaspis solitaria are mating - they are all over the Mimosas, Desert Broom, and the Mesquite trees, their larval host plants. 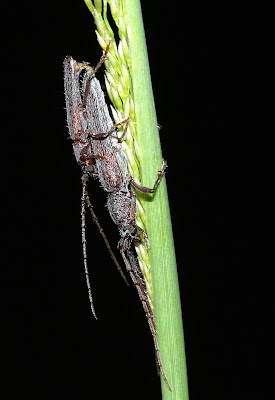 Another little Cerambycid is mating on grass. It's such a narrow-built, small beetle that the bunch grass may well be it's host plant. 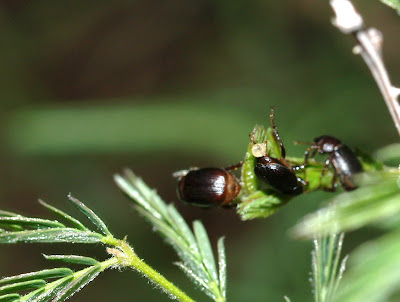 Just before the next cloud burst forces me back into my van, I discover many brown little Scarabs on the green parts of the Mimosas. It's Diplotaxis pumila, about 5 mm long and dark brown. Bill Warner tells me later that they are probably not uncommon (in fact, there must have been hundreds within the area around the pay-station of the canyon) but they are rare in collections. If they only come out in weather like last Friday, I know why! 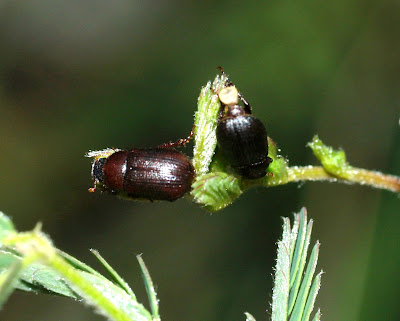 They were feeding on the mimosa leaves, some were mating, and some were producing little yellow spheres - eggs? - excretion of excess fluid? I wished I had paid more attention, because little is known about their life cycle. Scarabs don't usually lay eggs in the open on top of vegetation. But if these guys always do it before thunderstorms, the eggs would be washed down soon and reliably to their destination, the soil and roots under the bushes. Thus, the females could avoid climbing down to the ground where they might drown or be attacked by ants. It seems like an advantageous strategy, but nobody seems to know. 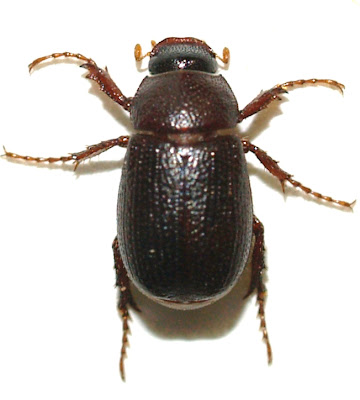 Diplotaxis pumila Fall 1909
Posted by Margarethe Brummermann at 10:41 AM