Mysterious piles of silvery grains in the desert

I like my social media connections very much, even if I do spend much too much time with them. On Facebook, BugGuide and Flickr I am connected to many knowledgeable experts in their fields and creative artists whose work I would otherwise never get to see.
I bring in my own contributions by helping local friends to solve their bug mysteries and identify the occasional lizard or bird.
A couple of weeks ago, I ran into a mysterious 'thing' myself. Actually, I found 'it' by kicking over a long dried cow pie, left in the state land behind our property by cattle that was moved out years ago. But I still find the occasional bug or banded gecko hiding in those places ... 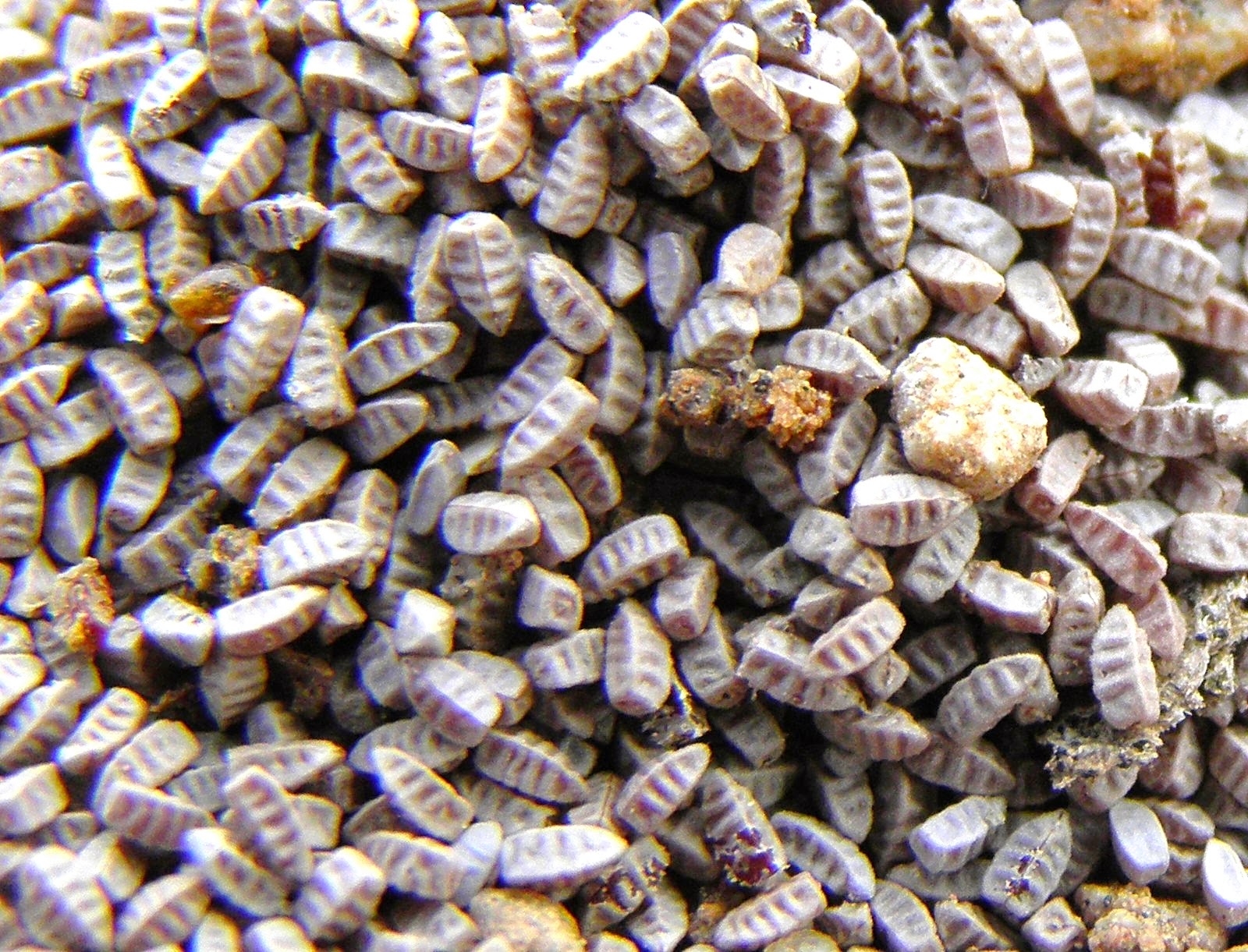 This time the ground under several pies was covered with a grainy silver gray substance. The grains were very regular in size. In my macro photos they also appeared sculpted or textured. There were tiny silver fish running between them. 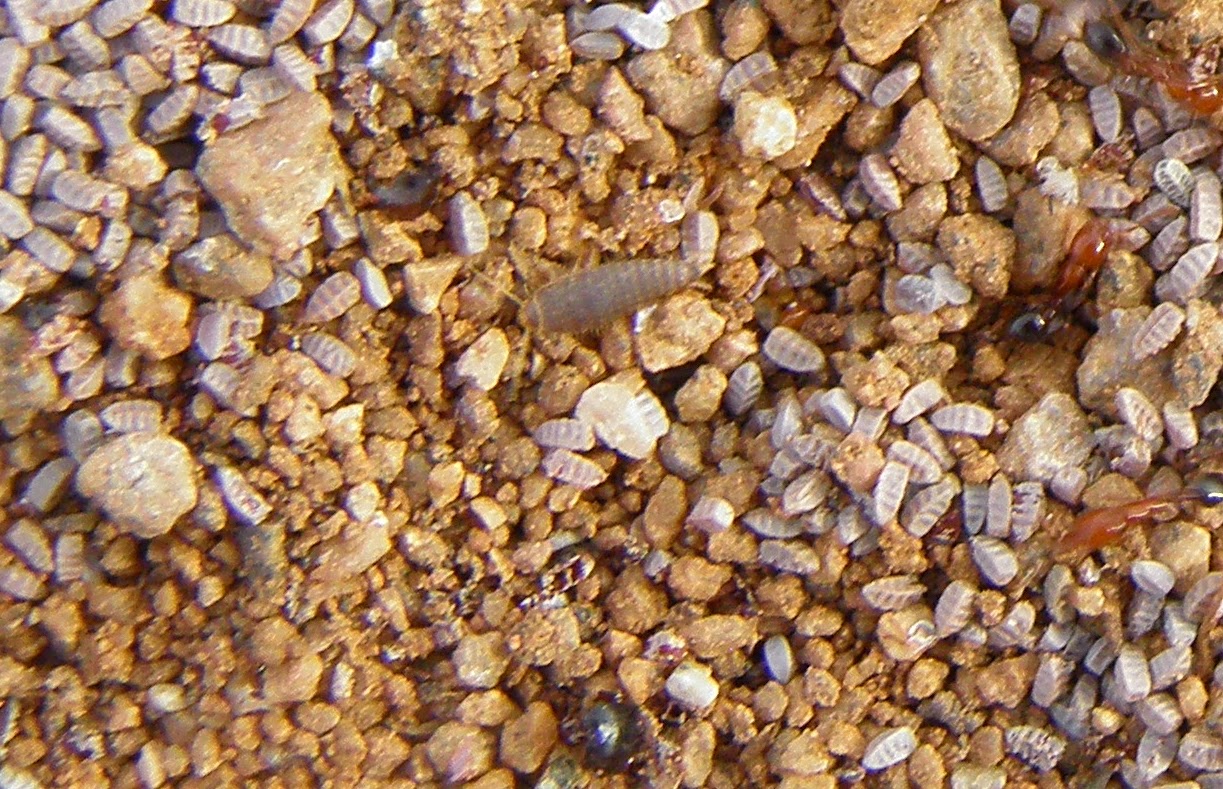 Silver fish eggs? No, every female lays up to 100 in her live time. It would have taken a village or a small town of silver fish to produce this many.

I put the image on Facebook rather than BugGuide because I wasn't sure that this had anything to do with insects.
Rich Hoyer immediately suggested seeds. 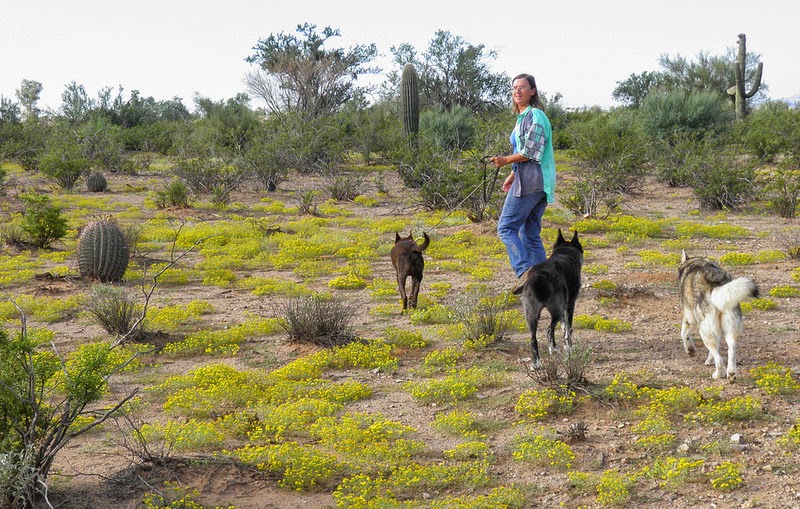 After the monsoon the desert was covered in a golden blanket of chinch weed. It's still blooming.   Many plants are already setting their papus-equipped fruit. 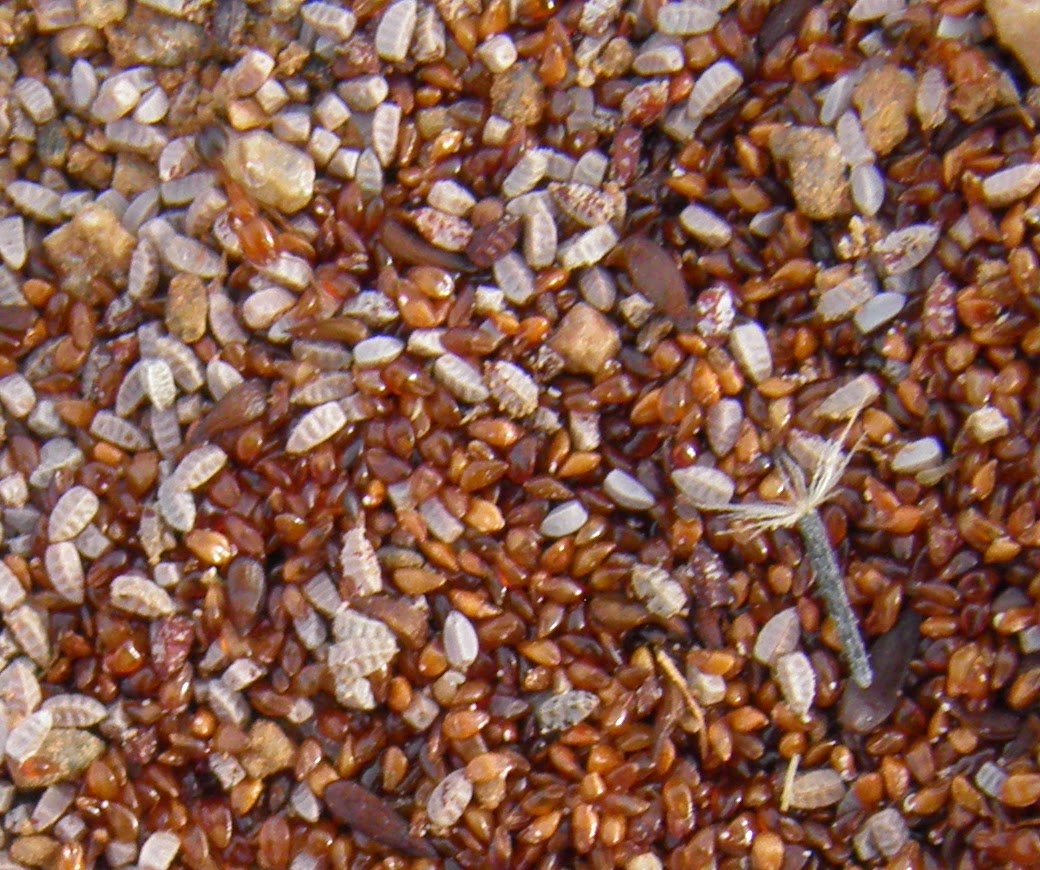 There would have been enough chinch weed seeds to collect, but those seeds are long and dark. After knowing what to look for I actually found about three of them among thousands of the shorter ones. There is one in the bottom right corner.

So what are the little grey seeds? James Trager suggested mint or euphorbia. After searching for a long time I came up with one plant that is probably in the mint family, but it is by far too uncommon.
Euphorbia then? 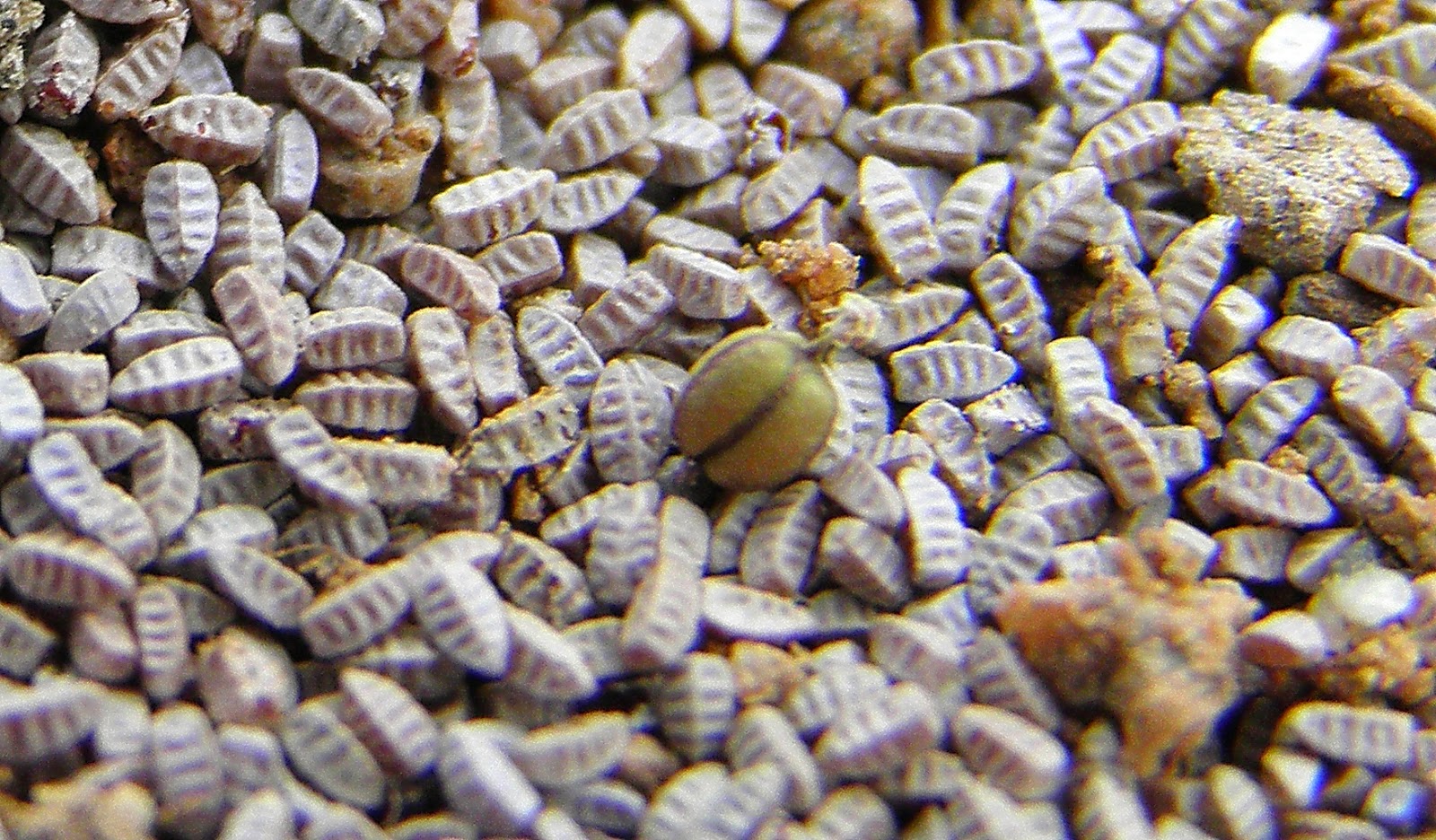 I sent the photo to Tom VanDevender who has a seed collection for the Sky Island Alliance. I had even discovered a seed pod in one of my photos by now. Yes, they are euphorbia seeds and can the alliance please keep the nice photo for their files? Sure.

But now I wanted to know the exact species. There are patches of a small brownish green, prostrate weed all over, but I had completely ignored it because it is so unremarkable and common. Does it even flower? Of course. I just needed a magnifying glass to see flowers and even little seedpods.

Actually, I soon recognized that there were two species around and posted photos of both on FB.  FB friend Burr Williams from Texas then linked my query to the young botanist Nathan Taylor who actually specializes in 'prostrate euphorbia species' and who was glad and excited to help!

He not only identified the two spp from our state land but also a third that had been in my files because of a bee fly that uses its tiny flowers.

So now think we know that the grainy stuff is indeed Euphorbia seeds, but how did it get under the old cow pie? Many FB friends speculated. The idea that the cow fed on the plant and then somehow segregated the seeds to expel them in a dense layer seemed unlikely. Also the seeds were fresh and the cow gone for years. It also wasn't wind drift that had piled up, because the cow pie was still sticking to the ground before I kicked it.

Of course, any collection of small seeds suggests ants. Many plants actually equip each seed with a little treat called elaiosome,, so ants will carry the seeds to their nests, eat the treat and throw out the seed, still intact (Seed dispersal by ants (myrmecochory).
Our two great collectors in the area are Veromessor pergandei and  Pogonomyrmex rugosus. But none of them seemed to be around in the vicinity of the cow dung. Also, both species tend to bring their harvest to their nests rather the storing it somewhere else. 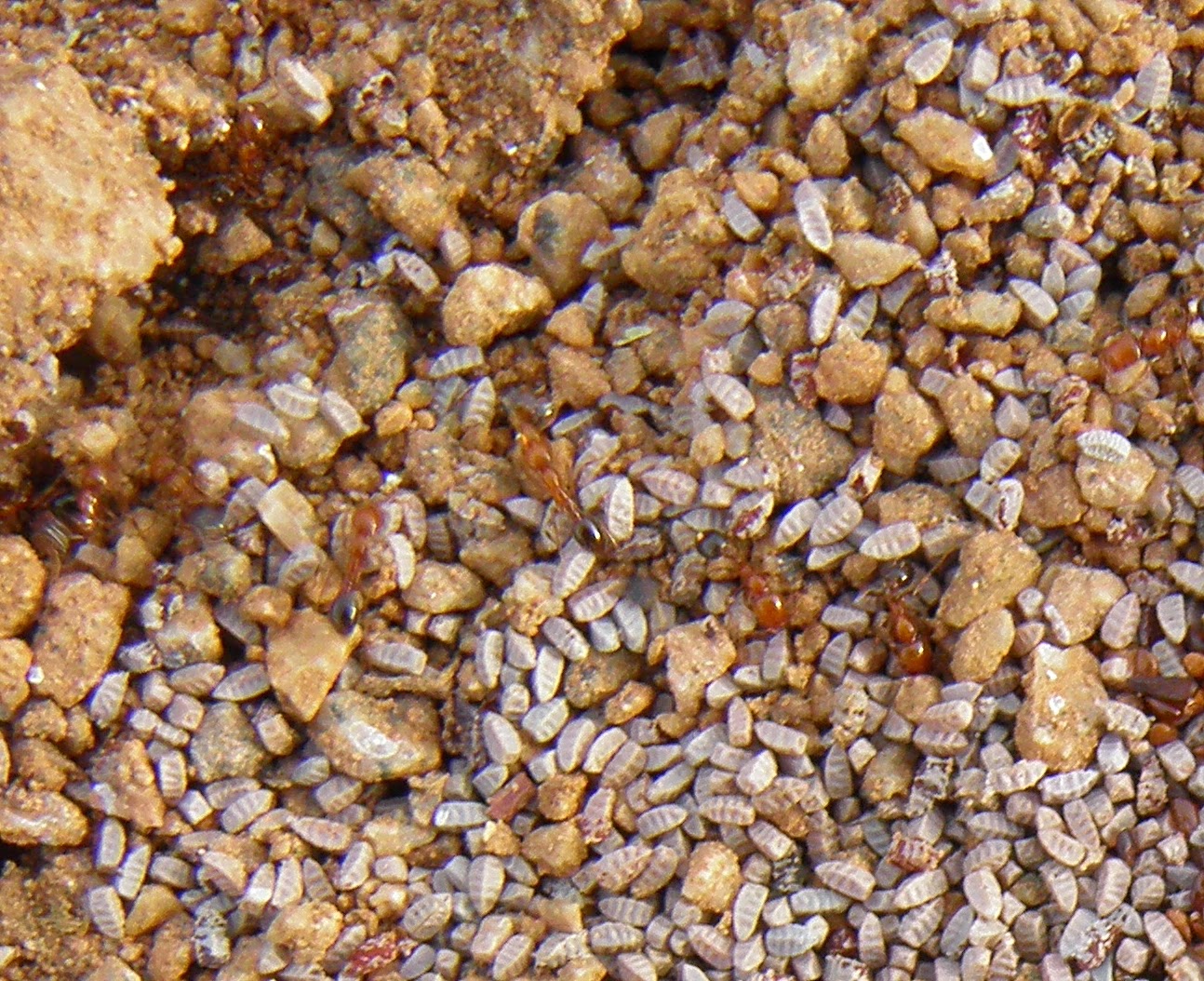 Under many dry cow pies, there are colonies of Solenopsis xyloni (Southern Fire Ant) a little ant that I only knew as a fierce predator. But James Trager told me that they also collect seeds. So I went through my pictures again. Yes! There are the little guys working among the seeds, and there even seems to be an entrance to a deeper more subterranean part of their nest on the left side. Remember that the entire seed pile was originally under ground, or at least under a very old piece of cow dung.

There, mystery solved! Net working and discussing worked. Except: what are those amber colored seeds? we thought that they were gray ones that had lost a waxy outer coating. looking more closely, I do not think so anymore. So? Suggestions?
Posted by Margarethe Brummermann at 5:27 PM