A walk in the Rock-disk Park 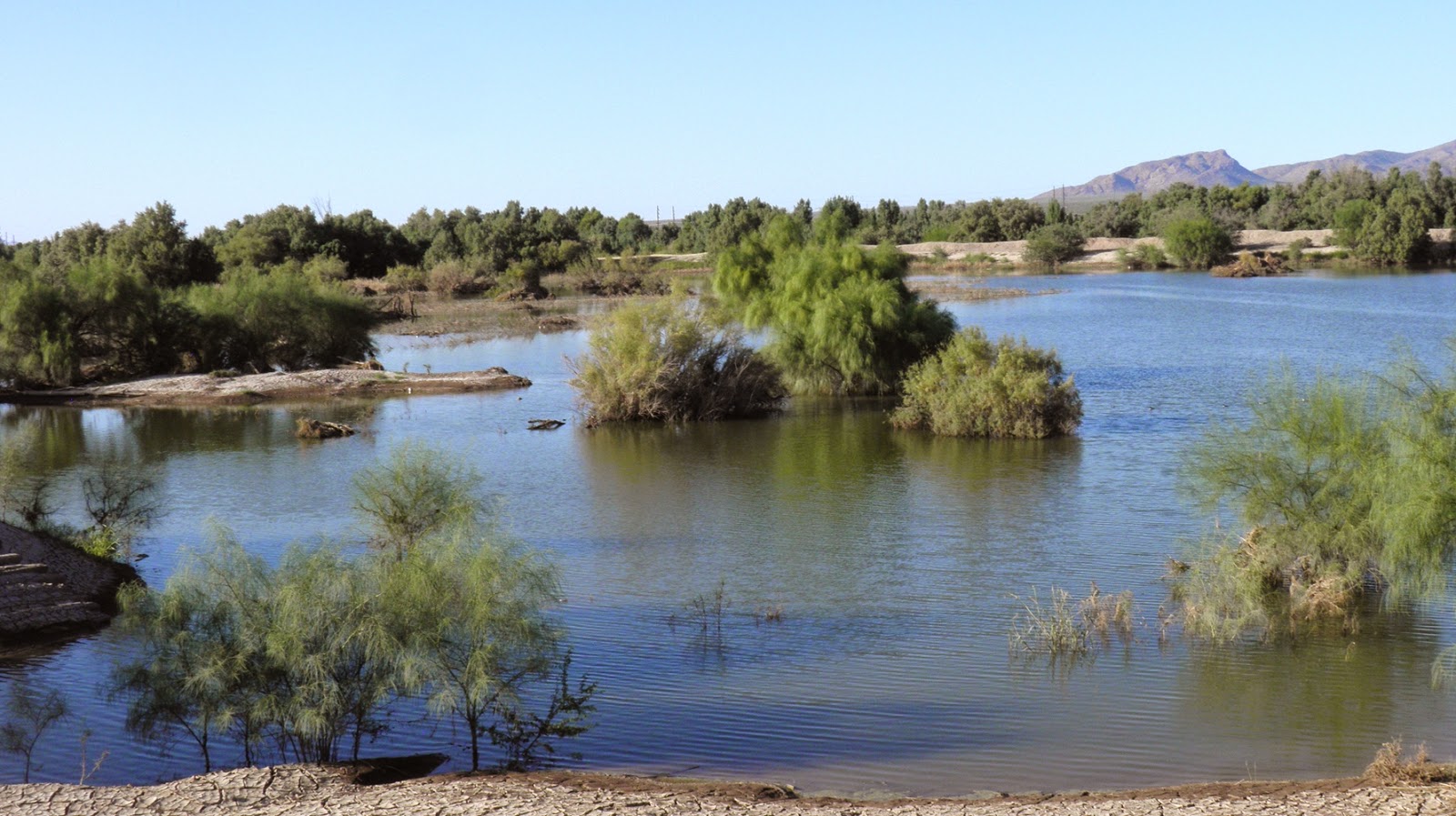 Here are just some early autumn photos from an area in Marana, Arizona, that was flooded by the Santa Cruz River during the recent storm. This is a very temporary wetland: I was completely dry for over a year. It is used as a golf-disk park.(Frisbee).  But now the river has changed its bed and keeps flowing into the low laying basin. Waterbirds and birds that depend on aquatic-breeding insects like gnats had found the new lake already. Vermillion Flycatchers and Black Phoebes were hunting from the branches of submersed trees.  The air was alive with swallows and I was surprised to hear and see a number of Kingfishers, so fish must have been washed in from the river. Squeaking their characteristic protest, several bullfrogs leaped from under my feet. So there is plenty of food for the 3 species herons and egrets that I saw during my short visit. 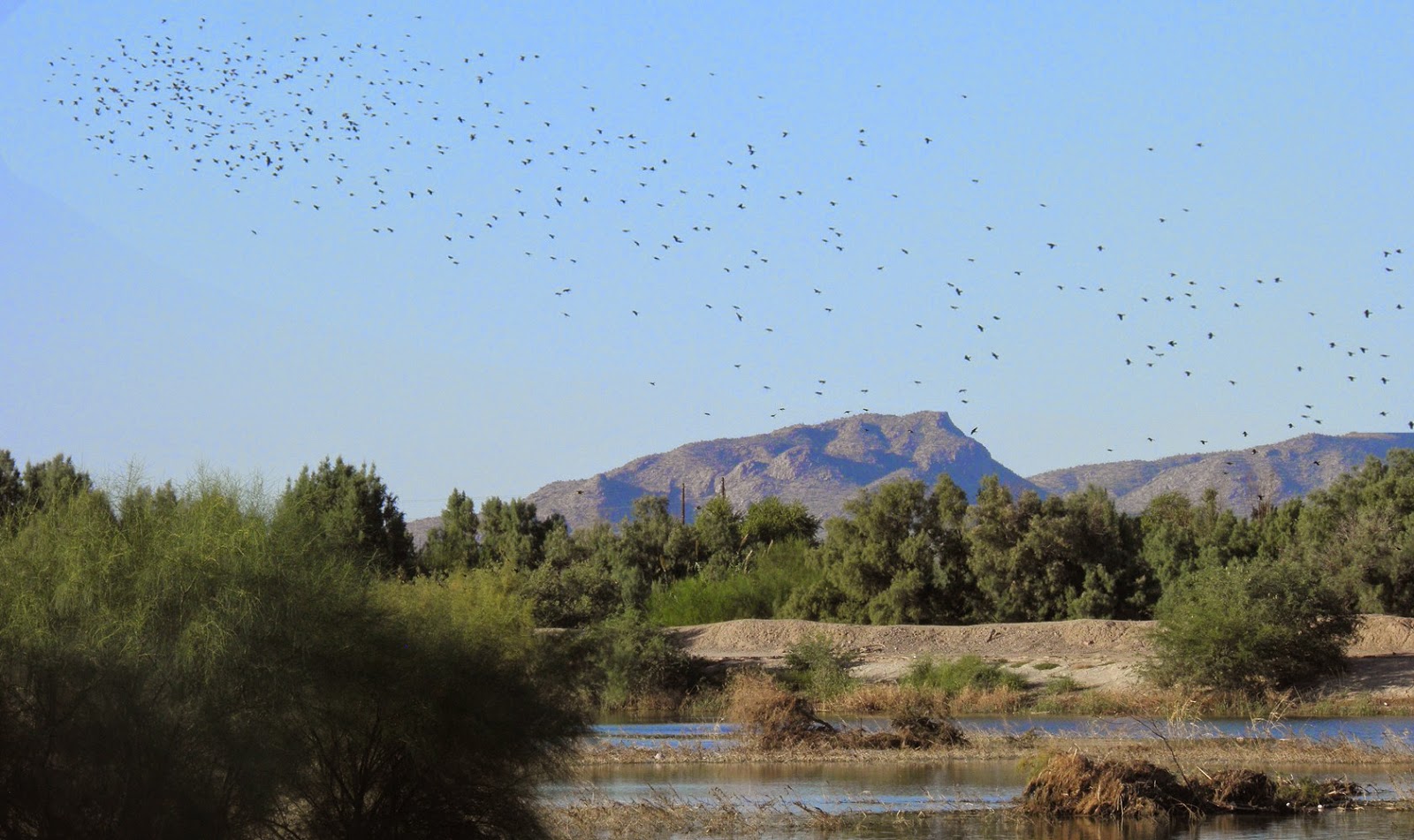 Just before sunset, thousands of Yellow-headed Blackbirds traveled along the river and descended into the lush vegetation to roost overnight. Tomorrow morning they will take off to feed in agricultural fields in Avra Valley and the Santa Cruz Flats.

Skimmer exuvia were clinging to weeds at the water's edge. Maybe they got started in a quiet part of the river before the flood. Adult 'Odes' are everywhere now. The dominant species by far is the Mexican Amberwing

Most of the water comes from several treatment plant downstream. The municipalities in charge recently improved the water treatment facilities so the water quality should improve. But so far the effluent was extremely nitrogen rich. That is reflected in the vegetation: I have counted at least 7 different species of nitrogen loving nightshades, all in extraordinarily huge specimens.

Nightshades produce potent chemical components. Some, like nicotine, have evolved as defenses against herbivores, others, like the tropane alkaloids of Datura may also lure pollinators. Several species of insects coevolved to use night shades as hosts, some of them doubtlessly sequestering the toxins for their own protection.

The county gardeners planted desert trees like Velvet Mesquite and Desert Willow along the paths of the park, but they seem to be hopelessly out-competed by the established population of Mexican Palo Verde and the invasive Tamarisk, probably due to the high nitrogen content of the soil. 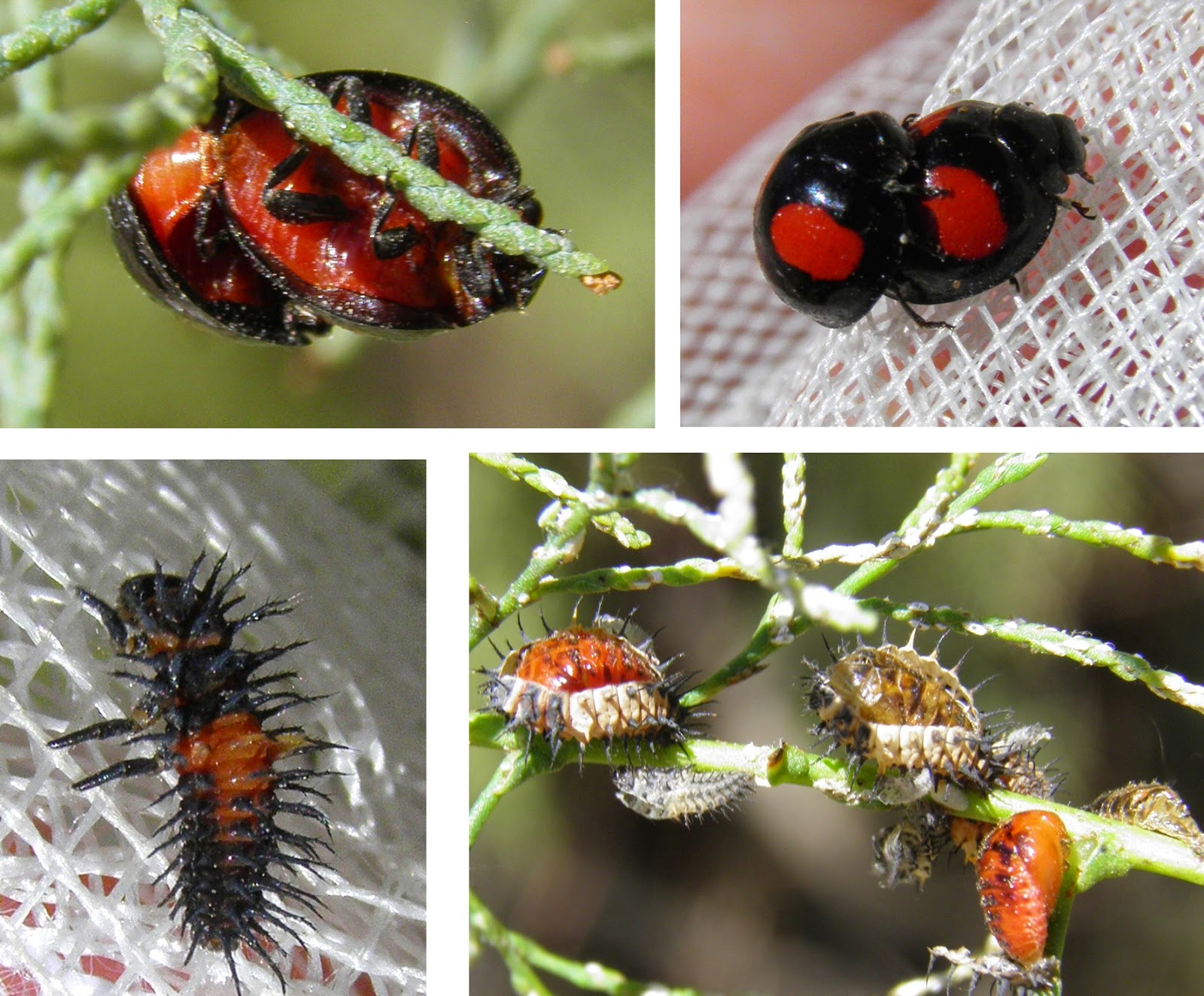 Those well irrigated trees are always full of wasps and American Snout Butterflies even though they are not blooming. They seem to either exude juices or host aphids (that I cannot find) that produce a lot of honey dew. This time there were all major development stages of Cactus Ladybugs on one tamarisk twig. 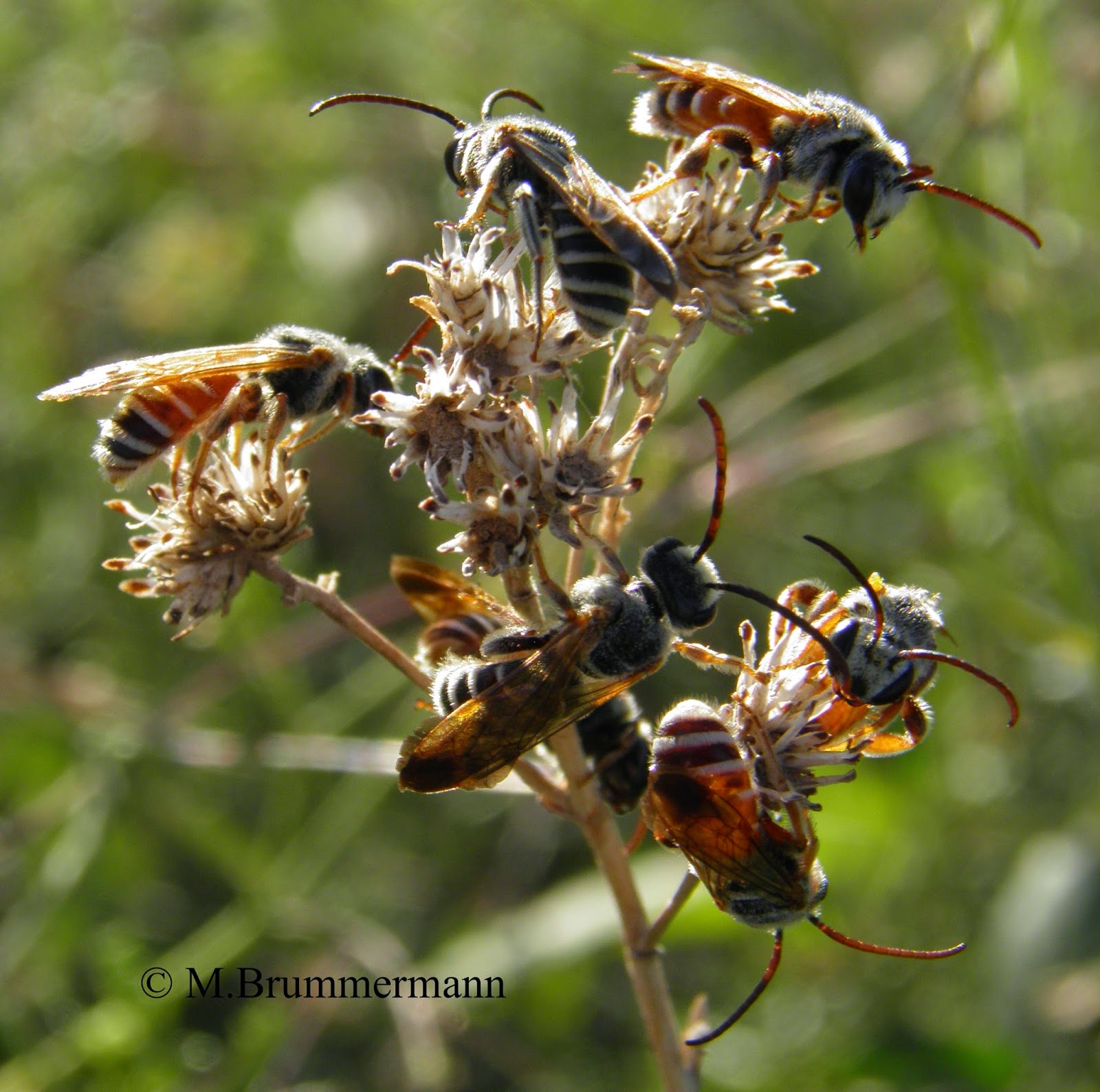 As I was searching the ground for grasshoppers suddenly some dry little sticks began to glitter in the last rays of the setting sun: Male sweat bees, Dieunomia nevadensis arizonensis were settling in to spend the night. After they settled they began to thoroughly preen (video here).

The last blooming Rabbit Bushes  (Haplopappus or Isocoma sp.) still hosted a variety of beetles. The sturdy Crossidium suturalis breeds in the stems of the small yellow composite.  The little Sphaenothecus breeds in Mesquite and Roses.Beetles of the Ripiphorus sp. below send their larvae home with ground-nesting, solitary bees to be raised as brood parasites. Hard to believe that he even is a beetle. But that's another story story - here 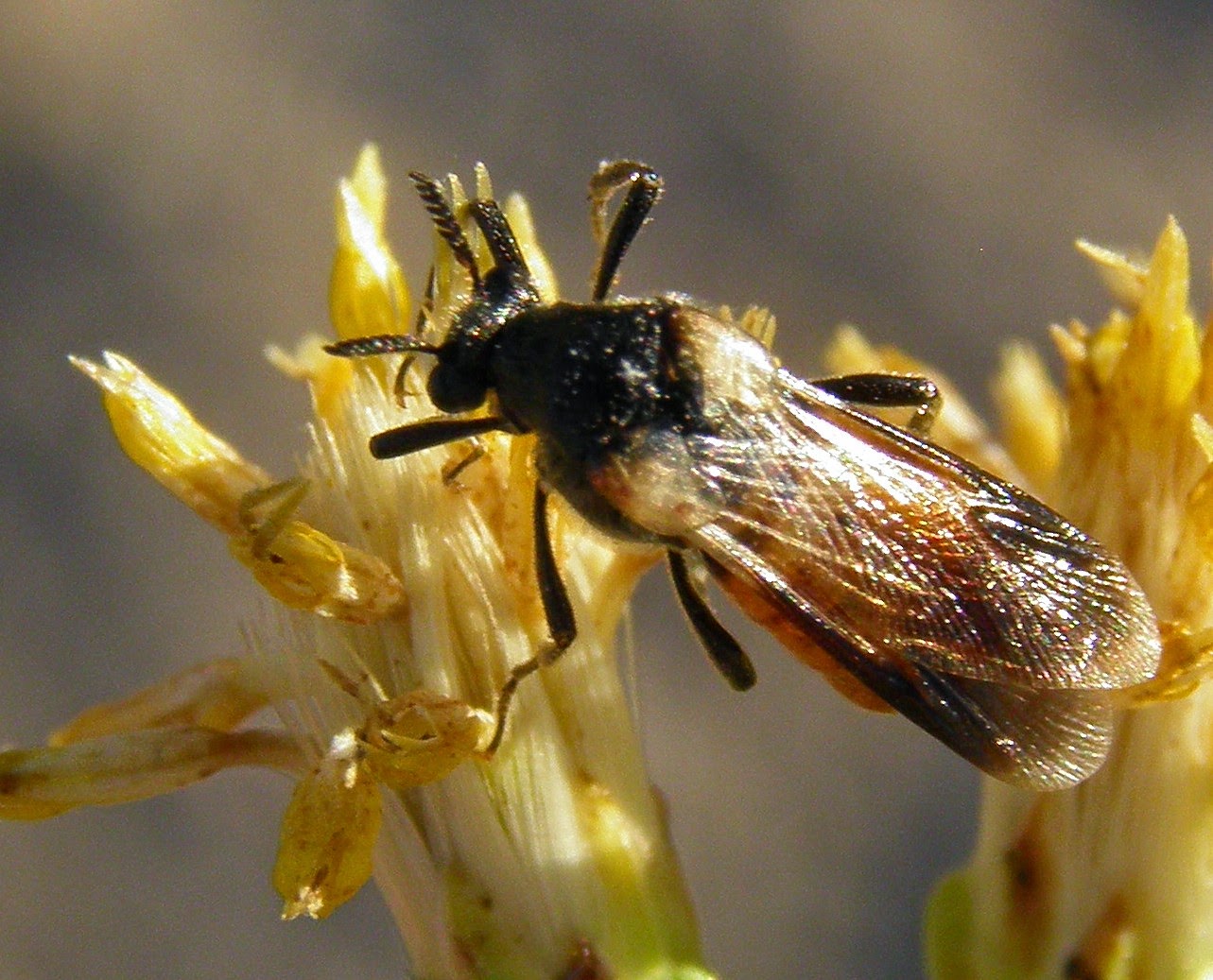 Posted by Margarethe Brummermann at 6:37 PM