Yesterday I found some caterpillars on the shoulder of Catalina Highway, just above Molino Basin.

Caterpillars of the Pipevine Swallowtail (Battus philenor)  feed on Aristolochia watsonii (Watson's Dutchman's pipe, southwestern pipevine, Indian root, snakeroot) which seems to be their only wild food plant around here.

Aristolochia watsonii is  rather poisonous, Aristolochic acid being the main toxin. That's  nasty stuff, even though it is has had medicinal uses in ancient Egypt, Greece and Rome and is still used in traditional Chinese medicine. It's names Birthwort and Snakeweed point at some its uses. In modern western medicine it is recognized as carcinogenic. It can cause mutations and  kidney failior. 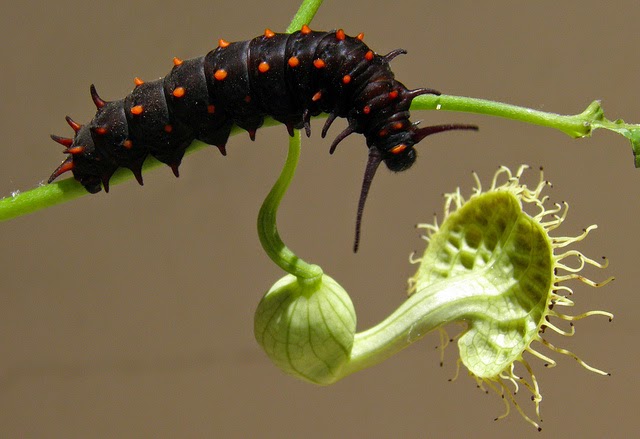 Nevertheless, Pipevine Swallowtail caterpillars feed exclusively on plants in the genus Aristolochia. Besides occurring on our endemic vine they can also be found on a tropical relative that is cultivated at Tohono Chul Park.

The caterpillars themselves are not negatively impacted by the toxin. Their physiology is adapted to dealing with it. They sequester the toxin in their bodies and become poisonous and probably bad tasting themselves. Their aposematic colors, either red with lighter red appendages or black with red spikes (the occurrence of either morph seems to be temperature dependent)  warns predators not to bother them. For a warning like this to be effective, the toxin should be unpleasant but not deadly so an inexperienced predator has a chance to learn by trial, the predator should be able to see colors and he needs to be smart enough to learn. This probably all applies to birds and reptiles and maybe small rodents like the grasshopper mouse..

Some  predators do not have the sense to understand (or see) the warning color and threaten the caterpillar anyway,  At close contact, the caterpillar will then stick out a fleshy, forked structure from its prothorax. This organ, the osmeterium, is common to caterpillars of all Swallowtail species. It  emits a foul smelling secretion containing terpens that should warn off even a color-blind attacker.

Even after metamorphosis, Pipevine Swallowtail adults still retain the chemical protection acquired by the caterpillar. It makes them so untouchable that another Butterfly, the Red-spotted Purple, Limenitis arthemis, mimics the looks of a female Pipevine Swallowtail very convincingly. The Purple' caterpillar feeds on Prunus sp. and trees in the Willow family and is probably quite edible. Incidentally, Red-spotted Purple and White Admiral are two races of the sames species of brush-footed Butterflies. Only the Purple shares the distribution of the Pipevine and also its looks. The White Admiral with his broad white band on black ground does not at all resemble the Pipevine.


Posted by Margarethe Brummermann at 6:51 PM