Animals and their habitat: Bighorn Sheep in the Catalina Mountains 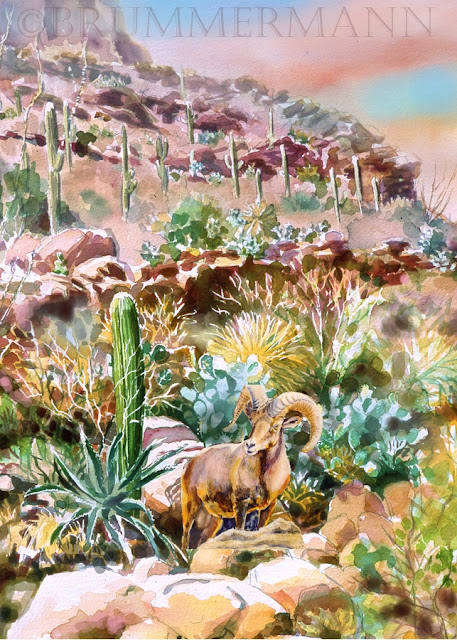 Animals in their habitat: Bighorn Sheep in the Catalina Mountains. When I came to Tucson in the early nineties, there were still occasional sightings of Bighorn Sheep mainly on Pushridge. Massive developments like SaddleBrook soon encroached on their area and the growing influx of hikers everywhere caused more disturbance than the sheep could take. A huge forest fire took the brush cover of the mountainside, and eventually predation as well as livestock diseases killed of the last sheep. Now, a few years ago, the forest service and game and fish (?) began an ambitious reintroduction program, releasing several truck loads of sheep over a couple of years. At first, the animals did not seem to thrive. They dispersed into unexpected areas and mountain lions killed several of them. In reaction to that predation, a number of mountain lions were hunted down, which caused a public outcry. Many in Tucsonans believed that the whole release program had been done not to bring back an established resident of the mountains, but just an attraction for trophy hunters. But I think the Bighorn population is stabilizing by now, lambs are born, young bucks still stray all the way to the Tucson Mountains and the remaining many mountain lions are probably very happy. To depict the situation, I moved a Bighorn Ram from an old painting digitally into a landscape painting of Pima Canyon on the south side of the Catalinas. While the result is artistically somewhat lacking - the landscape is overwhelmingly busy - I think this digital collage fits the situation very well, showing the introduced, wandering ram just a little too low on the mountain in the upper part of the Saguaro zone.
Posted by Margarethe Brummermann at 6:39 AM