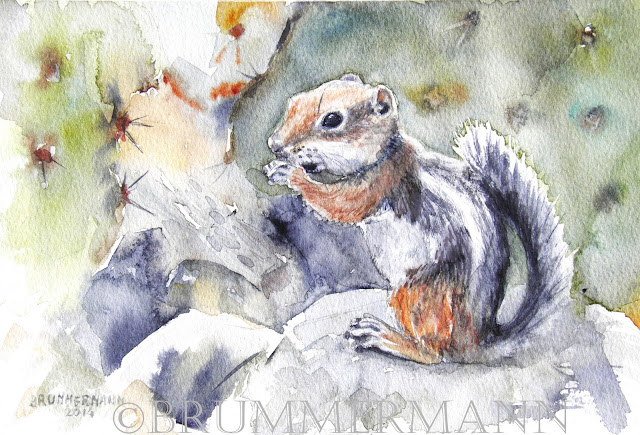 Cacti of the lower desert are important to the Harris Antelope Squirrels. They feed on the fruit of Barrel Cacti that are available all year round, ad generally stuff their big cheeks with anything from seeds to insects to even carrion. They are so dainty that they are able to jump into and hide in the most thorny Jumping Chollas. My dogs, and probably most hunting coyotes can only watch in deep frustration as the squirrel chitters only inches from their noses in relative safety. Besides coyotes, bobcats and hawks they have snakes to worry about. I have seen the little guys actively and aggressively take a stance against anything rattlesnake-related, even attacking and biting my snake stick that only smells of snakes. At this time (Feb. March) the squirrels raise their pups in underground (under cactus) burrows. All summer long, the day-active critters will brave the heat - one adaptation is their unusually high body temperature, also their little umbrella-tail and the habit of spread-eagling in shady places to dissipate heat to the cooler ground. During cold periods they seem to stay in their burrows, but during the last mild winter, a few were usually out and about.They are true denizens of the Sonoran Desert.
Posted by Margarethe Brummermann at 10:04 AM