Animals in their Habitat: Foothills Kestrel 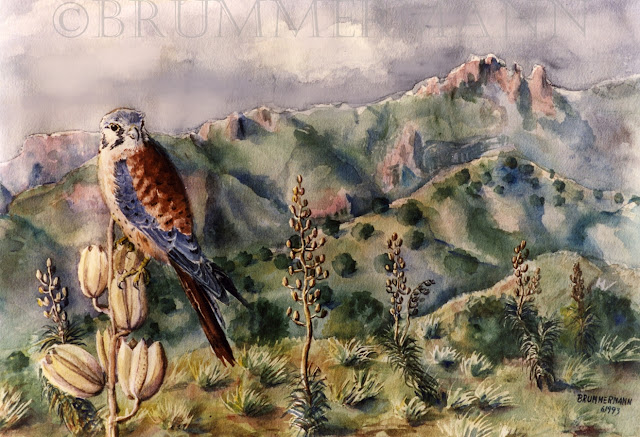 Animals and their habitat: Sometimes I take liberties when I paint: In the background of this watercolor from 1992 are the Catalina Mountains as seen from Tucson. But the Kestrel I had seen close to the Mule Mountains in Cochise County, and I liked his perch on the old Yucca stalk. Tucsonans will realize: those Spanish Bayonets do not grow in the southern foothills of the Catalinas (there are some on the north side, in the grassland towards Oracle though) Having lived here now for over 20 years, I would never again falsify a landscape like that. The Kestrel, however, would not care too much. The little falcons make their territories in grasslands, agricultural areas and in the saguaro desert, wherever there is open space around perches to hunt and nesting cavities to raise their offspring. We had a pair in our backyard for years, in an old woodpecker nesting cavity in a saguaro. They took a great toll on our lizard population which is the main menue the small male serves for the female and the chicks while he is the sole provider. Whne the larger female took to the wing again, she also served sparrows and finches.
Posted by Margarethe Brummermann at 9:09 AM