Comedy of Errors - the identification of narrow, shiny, dark beetles

Three weeks ago I was at the annual Beetle Bash at a friend's house at Cochise Stronghold, Arizona. Many entomologists from Arizona and beyond were attending. Late that evening we set up light traps in the Stronghold itself and I happened to collect a beetle that the experts first claimed to be a Tenebrionid  - and someone wrote down the unfamiliar species name for me. But when I put it under the scope, it clearly was a Carabid with very thin antennae, big mandibles and eyes. It's in the genus Pseudomorpha (Western False-form Beetle) and because of its shape, we sometime call it a 'roach carabid'. It's not very common, but I had found it a couple of times before.


About a week later when preparing to do laundry, I found a slip of paper in my pocket with the scientific name Doliodesmus charlesi. I searched my photos and specimens but couldn't find anything it could refer to.  I began to feel really bad about this laps of memory. To make it worse, the species did not exist on BugGuide.com. But I finally found a very bad UAIC image on the SCAN database for ground living insects of the SW mountain ranges. D. charlesi looked quite similar to my roach scarab - and yes, someone had id that one as a teneb at first. Mystery solved. Too bad, the teneb seems even rarer than the carabid. 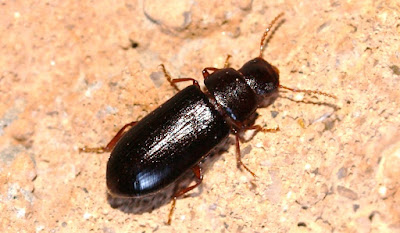 A few days ago I ran light traps in our drive way here in Picture Rocks, Arizona. A narrow, shiny black beetle with relatively thin antennae was running quickly up the slump block wall at the light. It seemed to be a carabid that I had not seen before, so I took care to photograph and collect it. This time, though, a close-up photo clearly showed the antennae and tarsi of a teneb.

I posted it on BugGuide where my friend Vassili commented 'not having a bloody clue feels so nice!

antennae so thin, prothorax so transverse, dorsum so shiny.. - i e-mailed Warren Steiner right away.' I hadn't been cheered on like that for a while. But Vassili's description rang a bell - it sounded just like a description of that 'roach carabid' again, except this time I was sure that it was really a teneb. I went in search of that piece of paper, and, not having cleaned my desk in a while, actually found it! Could this be the real Doliodesmus charlesi now? Checking the SCAN web site again, sure, this beetle does look like the distorted old UAIC specimen. So, if it all turns out to be correct, there are no more missing genera in the Diaperinae on BugGuide. Very satisfying.
Posted by Margarethe Brummermann at 7:31 PM