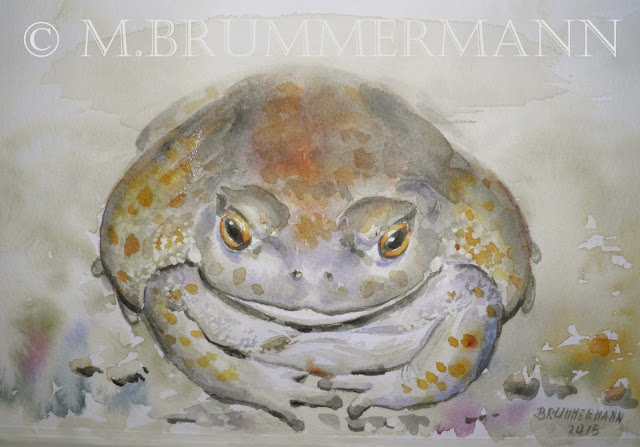 Here in Arizona we are anxiously waiting for the beginning of the monsoon. We already have high humidity, dust storms, dramatic clouds and black skies at times. But no real measurable rain yet, at least not on the west side of the Tucson Mountains. Of course, the wildlife around us is waiting more eagerly than we humans with our access to CAP water and ground water delivered from every faucet. Amphibians like toads, frogs, and spadefoots are hidden under ground during the dry season and emerge when water might be available. They need to keep their bodies moist because their skin is quite permeable - they breath through it and can absorb, but also loose, water. Even more than the adults the eggs and larvae of amphibians (tadpoles) depend on water. Some of our desert species are masters in utilizing very temporary puddles that only lat for a few days for their offspring. Those species, like red-spotted toads and spadefoots have produced quite a lot of offspring last year. But the big Colorado River Toads, or better now Sonoran Desert Toads (after their western most populations are disappearing) need more than just a puddle, they need at least a small pond to mate, lay their strings of eggs and for their tadpoles to reach maturity. Nevertheless, we have at least half a dozen of those prehistoric looking giants between our and our neighbors property. The probably have not bred in decades. But the individuals survive and eat  bugs nightly under all our porch lights and my black light.
These toads have a terrible reputation with dog owners and concerned parents because they produce potent psychedelic and toxic secretions from glands in their skin.
Wikipedia: 'Just behind the large golden eye with horizontal pupil is a bulging kidney-shaped parotoid gland. Below this is a large circular pale green area which is the tympanum or ear drum. By the corner of the mouth there is a white wart and there are white glands on the legs. All these glands produce toxic secretions. Dogs that have attacked toads have been paralyzed or even killed.'
The cocktail of chemicals produced by these glands contains among other toxins 5-MeO-DMT (5-methoxy-N,N-dimethyltryptamine) is a powerful psychedelic tryptamine. This had brought them to the attention of seekers of highs among humans - and dogs. 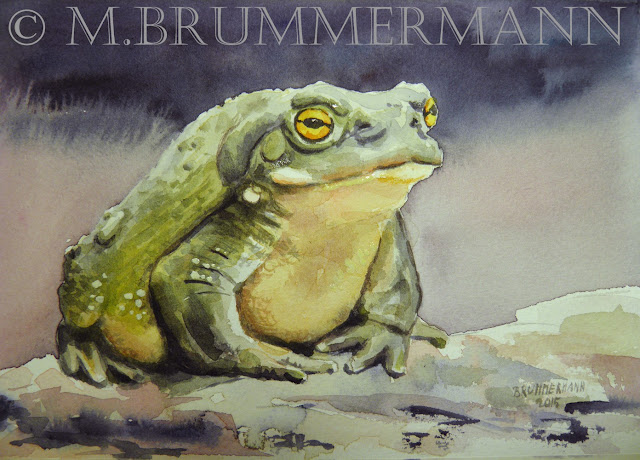 My best dog ever, Cody, discovered the toads when he was young. The first encounter was scary - his heart raced out of control and his breathing became labored. (no foaming from the mouth). But after that first time which ended at the vet's office  (Cody was already fine again when we got there), he seemed to like the effect and know how to dose it. So once a year early in the toad season, he would show up with his hair standing on end, very happily swaggering and humping everything in his reach (something he did not usually do). A dead toad would be somewhere in his wake. He eventually outgrew this behavior and paid no attention at all to the surviving toads that were always drawn to bird baths and dog tub. Our 5 other dogs always completely ignored the toads. So the danger from the toads to smaller dogs or unlucky individuals is certainly real, but nobody should overreact and try to eradicate the toads. Remember, they were here fist, they are surviving in a very difficult environment, they may be the only ones that actually eat the big Palo Verde Root Borers.  Different from rattlesnakes, Sonoran Desert Toads will never make any aggressive advances towards the dogs. They only want to be left alone. ... The skin secretion is also an irritant to mucous membranes, and most dogs will realize that and back off after the first contact.  Any reasonably smart dog can learn to stay away from the toads with some training and supervision.  You can never be sure that you eradicated every single toad from your yard. But you should be able to control your pets.
The smaller species like Woodhouse's Toad, Great Plains Toad, and Red-spotted Toad are not, or only mildly toxic and pose no threat. Still, I see a lot of hysteria in public forums that targets even those harmless guys.
Posted by Margarethe Brummermann at 6:23 PM