The Santa Rita Mountains already received a nice amount of monsoon precipitation. Mark Heitlinger, the manager of the research station in Florida Canyon sent me this encouraging graph.

When I crossed Madera Creek at  Proctor Road I found only a little trickle of very murky water and no roadside flowers yet. The Mesquite Trees were blooming again and the tall candles of blooming Sotol stood out from the brush. From earlier years, I remember trips with Eric Eaton when it was difficult to make him move on from the overabundance of Hymenoptera and Diptera that usually buzz around these nectar sources. But yesterday, there wasn't much diversity.

The insects that I did find where all old acquaintances that I had photographed before. So - since I did not need any more documentary shots - this time I went for close-ups, portraits and details.

All photography is done with my point-and-shoot Olympus SP-800UZ, an ideally light camera for hikes in hot, muggy weather and under threatening storm clouds. The SLR stayed safely tucked away in the car.

There was some activity on the few Desert Broom bushes that have not fallen victim to the strange maniac who goes around year after year and brakes off the most mature and attractive bushes. Why would anybody do this?

The sweet sap oozing from the bark of some Desert Broom bushes attracts the strangest table fellows and often causes short displays of aggression and dominance. This Chlorion had just chased off a big, clumsy Tarantula Hawk, then shared peacefully with the scarab, only to finally get chased off herself by a horde of marauding ants.

Giant Agave Bugs seem to be able to pierce the intact bark to reach the sugar water flow in the phloem of the bush. Often, they actually seem to start the sap flow for everyone else. All extremities of the huge dark bug end in bright orange segments that seem ideal for signaling and posturing.

Not all wasps are just snacking on sweets. A Polistes comanche is masticating Marine Blue caterpillar into a package that's easy to carry to a colony full of hungry larvae nearby. 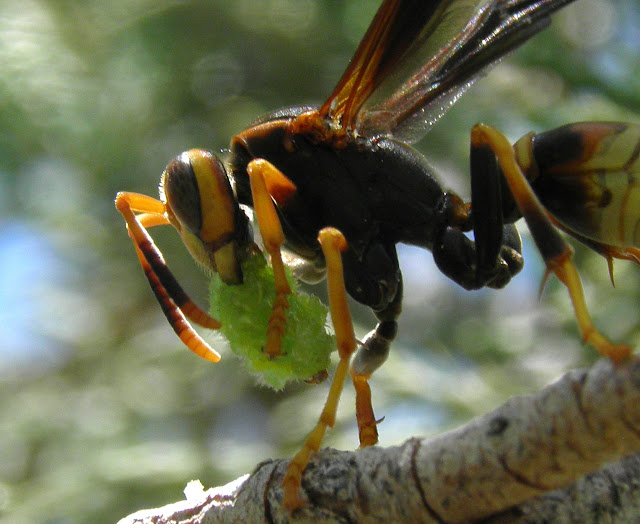 For years this area close to the ticket booth for Madera Canyon used to be dominated by several colonies of Polistes major, but it seems that they have been replaced by Polistes comanchus this year. 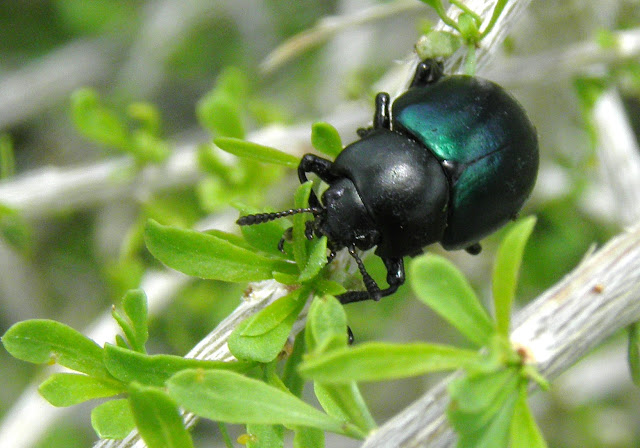 Finding this Leptinotarsa haldemani chomping on the leaves of a bush instead of the usual herbaceous Nightshades surprised me until I realized that it is Lycium pallidum – Wolf Berry, or Pale Desert-thorn - in the family Solanaceae. Still to me it's a new host for this beetle. 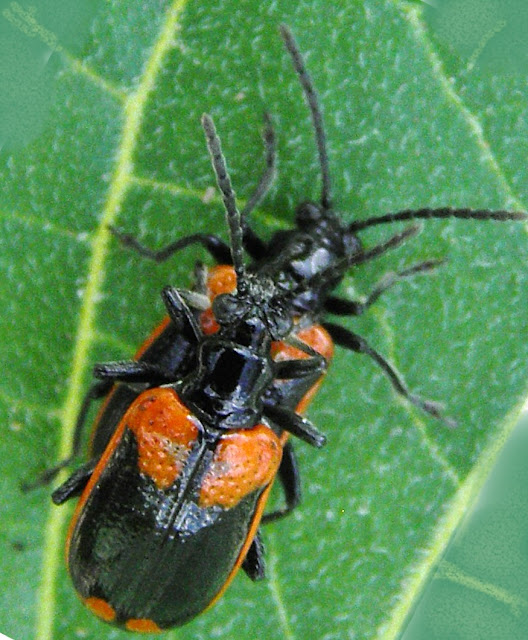 Brightly aposematic Leaf Beetles, Lema trabeata, are using a Datura Plant to provide for their offspring. A reliable source of juicy leaves and protective alkaloids if the monsoon holds its promise. 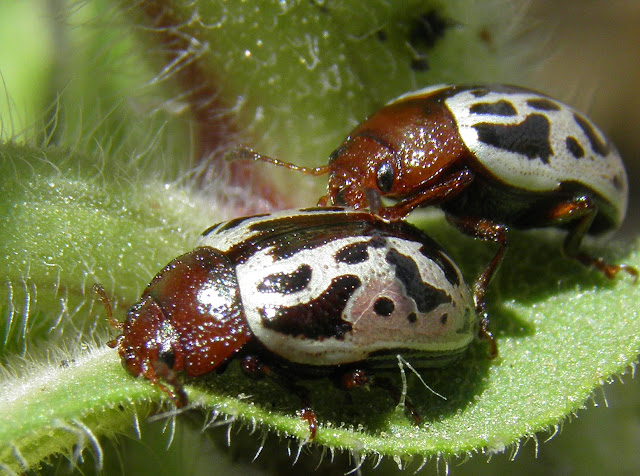 Zygogramma piceicollis pairs are hiding in Asteraceae that are shooting up now and will soon produce yellow flowers and later those annoying black, elongate seeds that seem to be waiting for entomologists swinging insect nets as their chosen form of distribution. I hope the beetles and their larvae are very hungry!

After several couple of hours in the low grassland at over 90 degrees Fahrenheit and, as it feels, over 90 percent humidity (it actually rained a couple of times), 80 Degrees at the upper Mt Baldy trail head are refreshing and cool. Ceanothus greggii is still blooming, but many of the plants have been destroyed by mud slides last year. 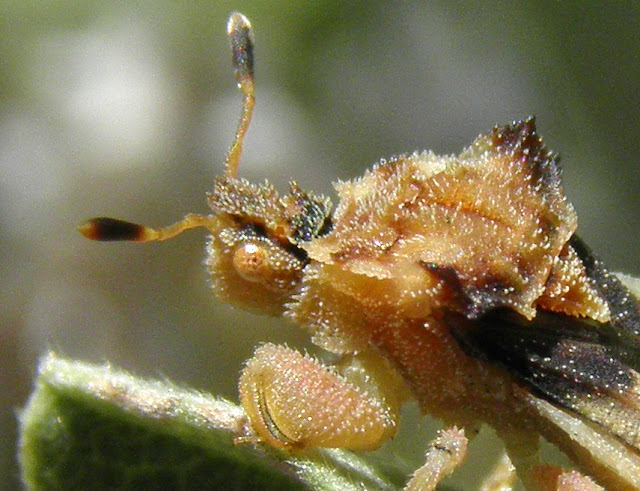 A hunter is hanging out among the small flowers: a small ambush bug in the genus Phymata. Waiting motionless for prey to walk into the reach of it's short, strong raptorial arms, it is ready to take on prey several times its size. Brachial power is not its only weapon: its bite will quickly paralyze its prey. 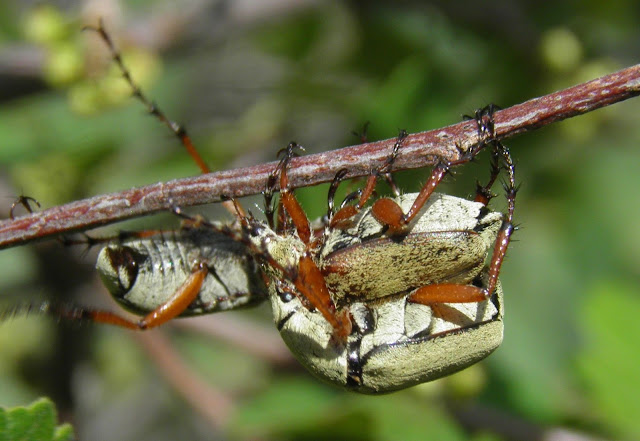 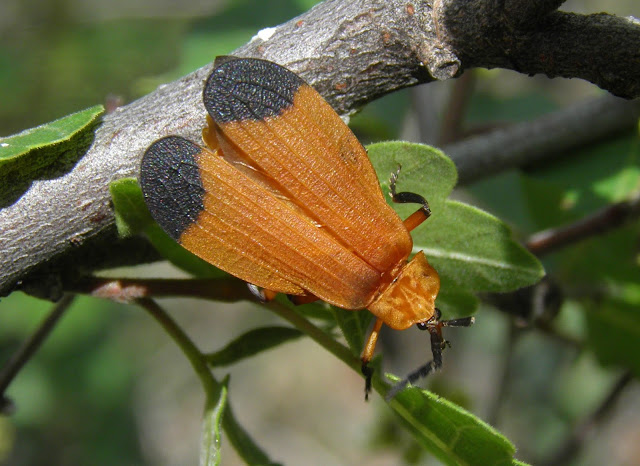 Soon several species of red Net-winged Beetles (genus Lycus) will join them and buzz around the oaks in great numbers, but this time I only see a couple of individuals. 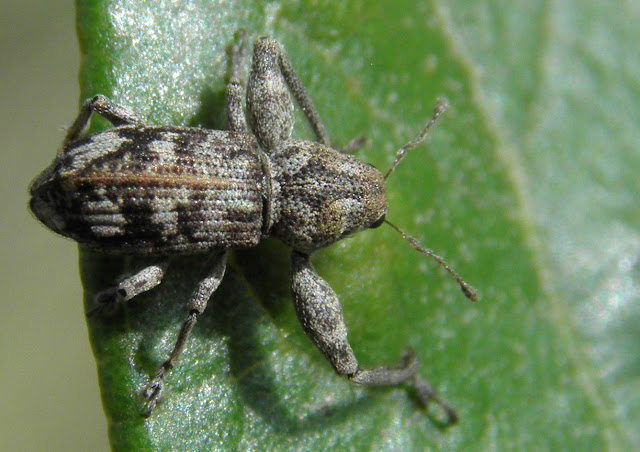 Weevils in the genus Pandeleteius nibble on the tips of oak leaves. They look like spiders from afar, but close up they always remind me of Popeye  after a good meal of spinach. 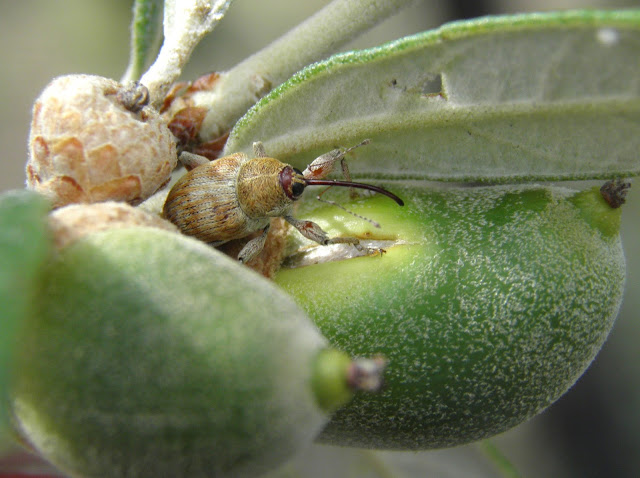 Weevils in the genus Curculio are extremely difficult to identify to the species, but I feel some justification in calling this one an Acorn Curculio. I usually see them at the black lighting sheet and never realized how well their subtle pattern matches that of a young acorn. 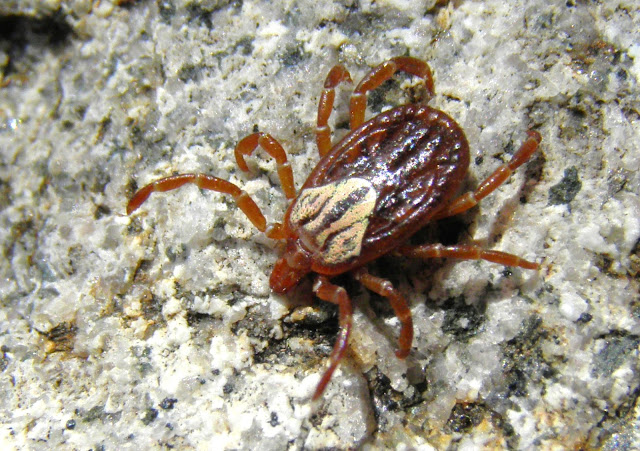 A persistent irritation under my shirt drove me into the privacy of the trail head restroom. The culprit: a rather large tick that obviously had not found a spot that it liked. Luckily. We don't seem to be in an area with a lot of Lyme disease here, but a tick bite is never pleasant. Trying to identify the tick, I end up with the eastern genus  Amblyomma. Now I wished I had collected the specimen as a voucher because that would be a considerable range extension for that genus.
Posted by Margarethe Brummermann at 4:17 PM