Last night we finally had a very heavy rain storm here in Picture Rocks on the NW side of Tucson. The rain came in in horizontal sheets, lighting flashed while simultaneously thunder clattered, tree branches flew, washes rushed and Spade Foots bleated. This morning then, volcanoes erupted. 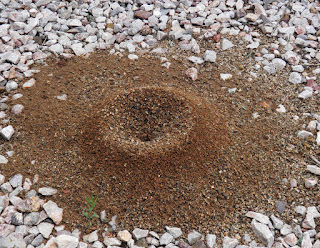 Columns of moving particles rose into the air, hovering up and down over the tops of trees and my head. Leaf-cutting Ants  Acromyrmex versicolor  celebrating their nuptials. 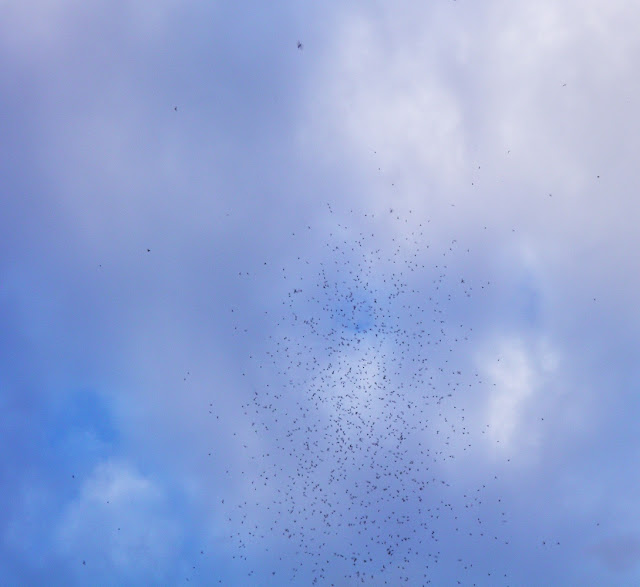 Winged males and females had been waiting for their chance in the depth of the colony and were now pushed into action by busy workers. They did not actually poor out of the volcano but out of another exit of the wide-stretched underground city. 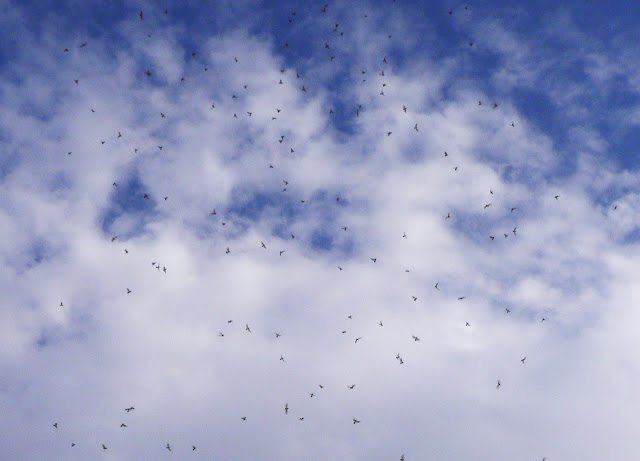 During their aerial dance, males and females found each other, began to mate and tumbled to the ground, the pair often imbedded in a cluster of less lucky males. The small headed males die shortly after mating. 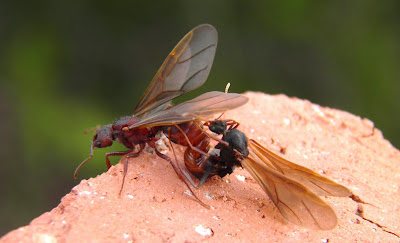 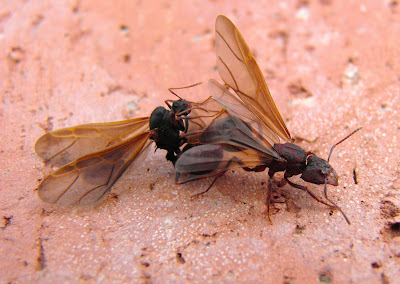 The young queens are easily recognizable by their big, well formed heads. They do not only carry a piece of the old colony's fungus (the only food this species enjoys) in their crops, they also have the mandibles and muscles to start cutting leaves and begin a new fungus garden. Until the first workers are born, all the work is done by these young queens. They often gang together in small groups to get started, but the dominant queen may later eliminate her sisters.

Colonies of this species are huge under-ground cities with many chambers. They are always located in the vicinity of trees, not out in the open. I have watched the mother colony in front of our house for 13 years now. The 'volcanoes' vary in size and location, activity levels around the entrances go up and down, but the colony survives. The swarms appear after a heavy rain fall, sometimes as late as October. All colonies in the neighborhood are active at the same time. But they are so far apart, and the swarms so stationary - exchange between them seems rather unlikely. So are the ants constantly inbreeding?

Entomologists thought that the devoted altruism among colony members is based on the fact that all of the workers are full-sisters, sharing 75% of their genes. Doubts came up when it was discovered that the queens mate with several males, so their offspring might share only 25% of their genes. But if all those males are really just brothers of the queens from the same colony, the off-spring would be related to a much higher degree and altruistic, self-sacrificing behavior would be much more understandable - in the end it's the egoistic gene (-nom) not the egoistic individual.
Posted by Margarethe Brummermann at 10:51 AM