Mining Bees under the bedroom window

Indoors, I put each bee into a white ceramic bowl and covered it with a clear plastic container. It took a while for them to calm down. If they had been beetles, they would have experienced a short cool-down in the fridge by now, but bees just don't look right when they are cold. So instead, I got the chance to take a few quick photos, some OK, some blurred and some out of focus, of each bee before she took off for the window. No harm done, they were easily coaxed back into the container.

Update: In the following years  I did not see these bees nesting again. But my observation and photos made it into a great new bee book 'The Bees in Your Backyard' by J S Wilson and O M Carril Princeton University Press 2016. 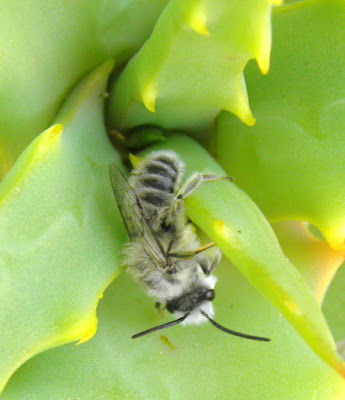 In April 2018, on our neighbors' potted Aloe, I found a group of sleeping males of another Ancylandrena species Ancylandrena rozeni.
This species was first found described in the Tucson Mountains.  Mine were identified from my photos by John Ascher.

Posted by Margarethe Brummermann at 5:43 PM