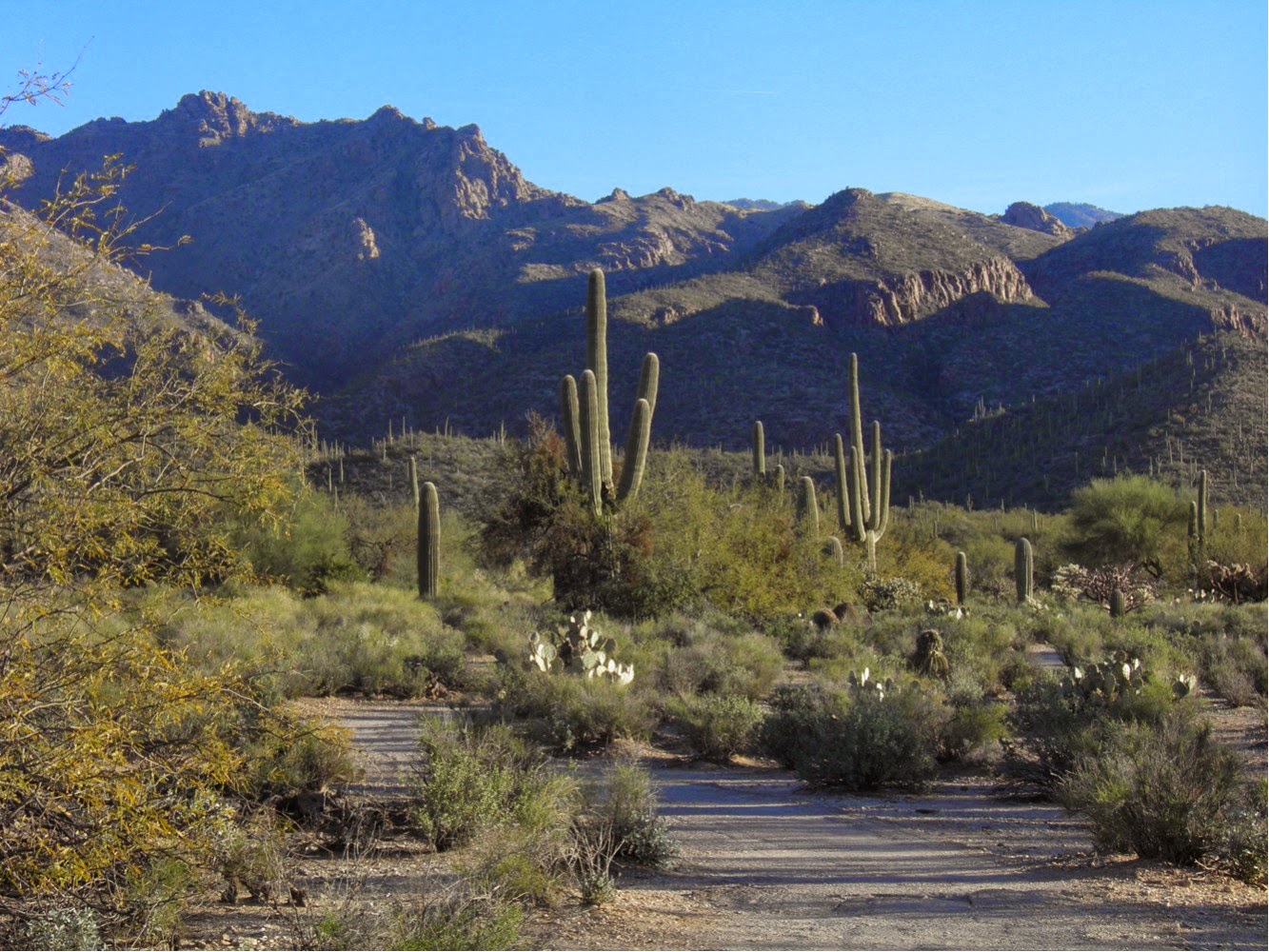 I try to join Ned Harris and his naturalists tours in Sabino Canyon at least once a month. It's nice to be in like-minded company, even though I usually don't last very long in the group because I stop too often and too long for insects that are too small for most participants' eyes or camera lenses. 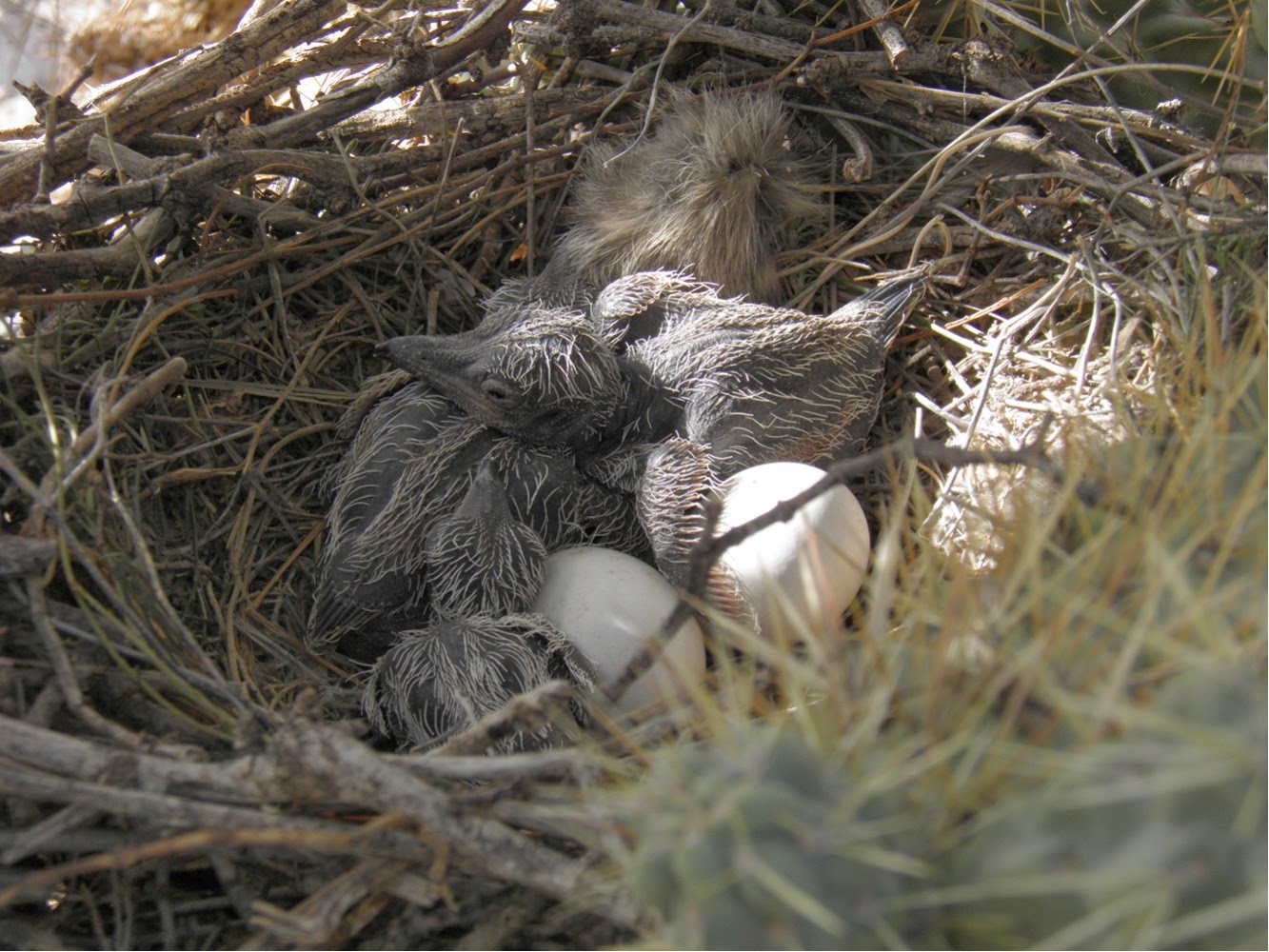 This time, my first stop (before I met the group) was devoted to the resident Roadrunner.  When I found the nest, very well hidden in a Chain Fruit Cholla, I got a glimpse of some chicks and some as yet unhatched eggs. Roadrunners begin incubating right after the first egg is laid so the chicks are as different in size as organ pipes. Many birds with nestlings that are born blind, featherless and dependent on their parents (altricial) follow this strategy. For the youngest ones, this can be perilous. Their only chance of survival is a year with plenty of food. Under poor conditions the parents can decide to raise only the older, stronger siblings to ensure at least their survival. There seems to be a tuft of fur from a bunny or a rock squirrel tail in the nest. So this pair is bringing in rather big prey. That probably means good chances for all the chicks. 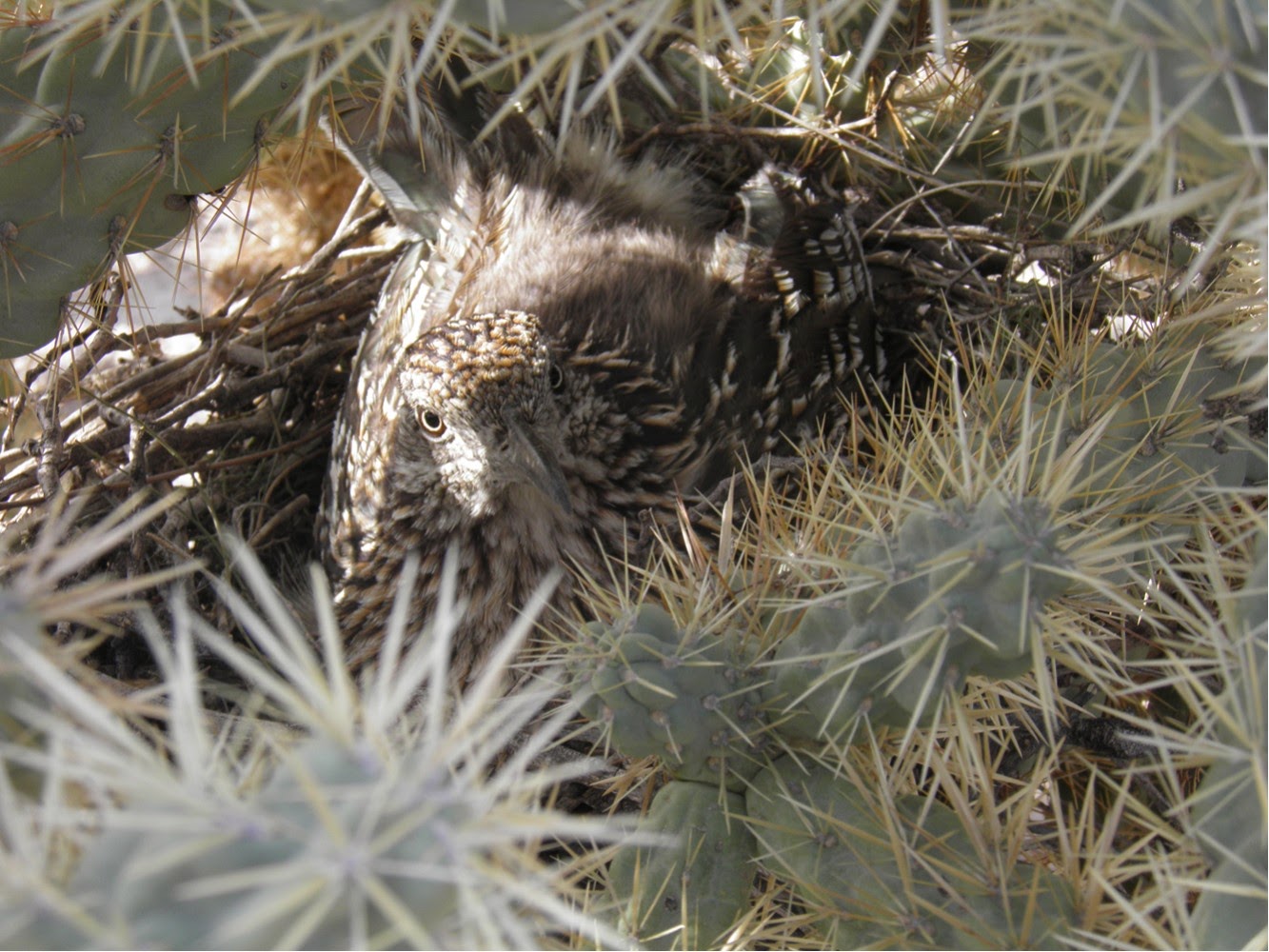 When I checked again on my way back, I was greeted by the angry stare of one of the parents. Altricial chicks are rarely left alone, and that means that in many species both parents share the nest duties. 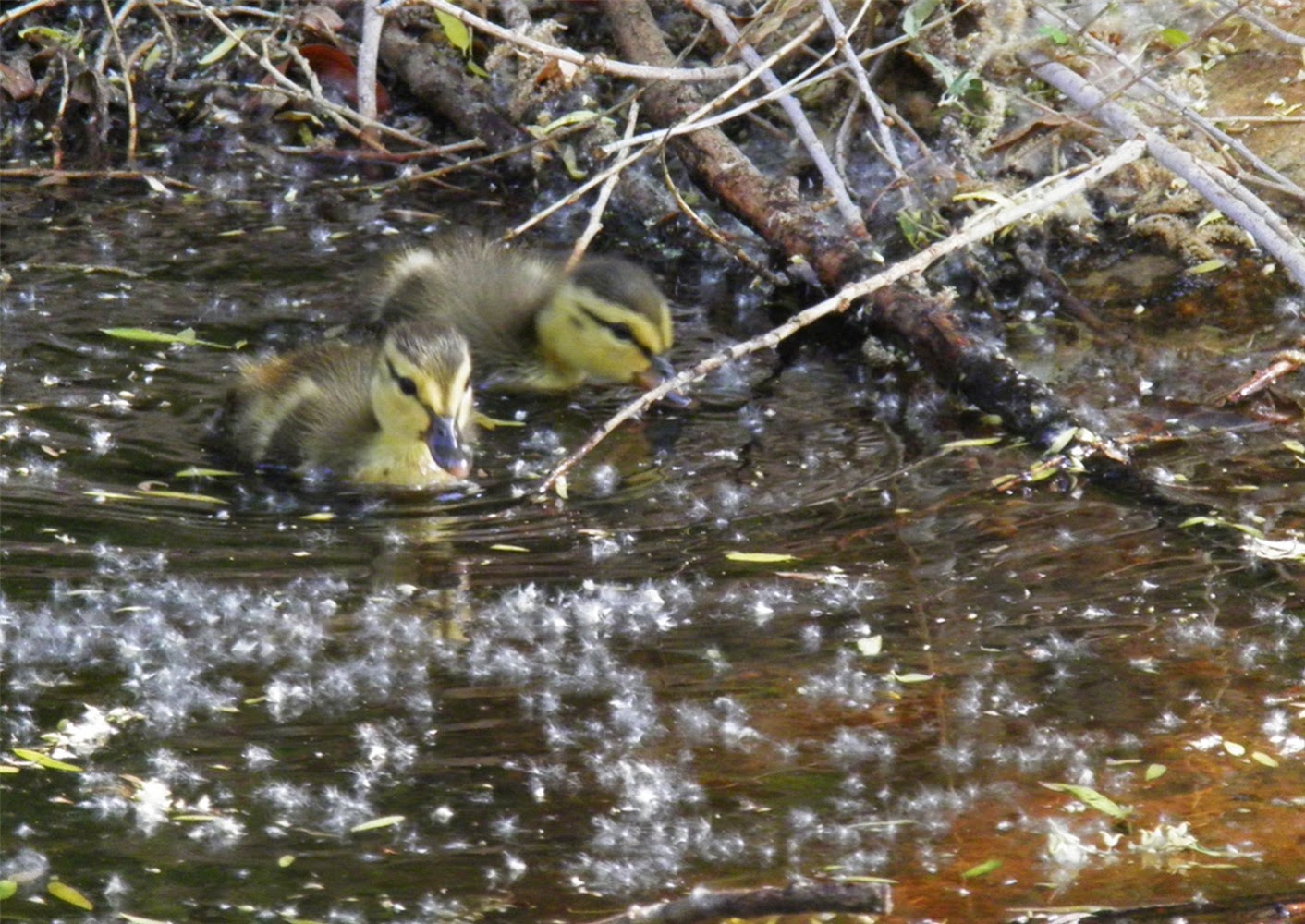 Two lonely, very young Mallard chicks were dabbling in the small pond by the dam. They were contently feeding on the willow seeds that drifted into the water. Very different from roadrunners, ducks are precocious birds. The female only starts incubating after she has laid the whole clutch. So the chicks all hatch on approximately the same day even though some eggs are up to 2 weeks older than others. The chicks hatch with feathers, open eyes and ready to go. And they have to. The family, which means mother and chicks, the father is not involved, leaves the nest and the dangers of sedentary living and moves out right away. The two in the picture seemed actually to be on their own, no mother in sight. And yet, they still have a chance to grow up.

The first interesting insect was a little fruit fly that I had never seen before in the Tucson area. Some of these flies can become invasive destructive pests of agriculture. That's what those controls between CA and AZ are about, to stop the cross border transport of infected fruit. So I sent this photo to a friend who works at USAD. Just in case. We all thought that it looks quite similar to the Apple Maggot Fly, Rhagoletis pomonella (which would not find a lot of suitable food in Sabino, I'd say, not many rosacean plants there). Unlike the apple Maggot Fly, it has no white scutellum. Martin Hauser then pointed out that it could be  Procecidochares atra, in which case it would be a gall producer rather than a fruit maggot fly. As the common host, Golden Rod, doesn't grow at the elevation, I will be looking for similar galls on related plant species.

In the canyon, Brittle Bush was still blooming where it thrives on water run-off from the road. The dominant bees here were Dufourea sp. in the Sweat Bee family Halictidae. 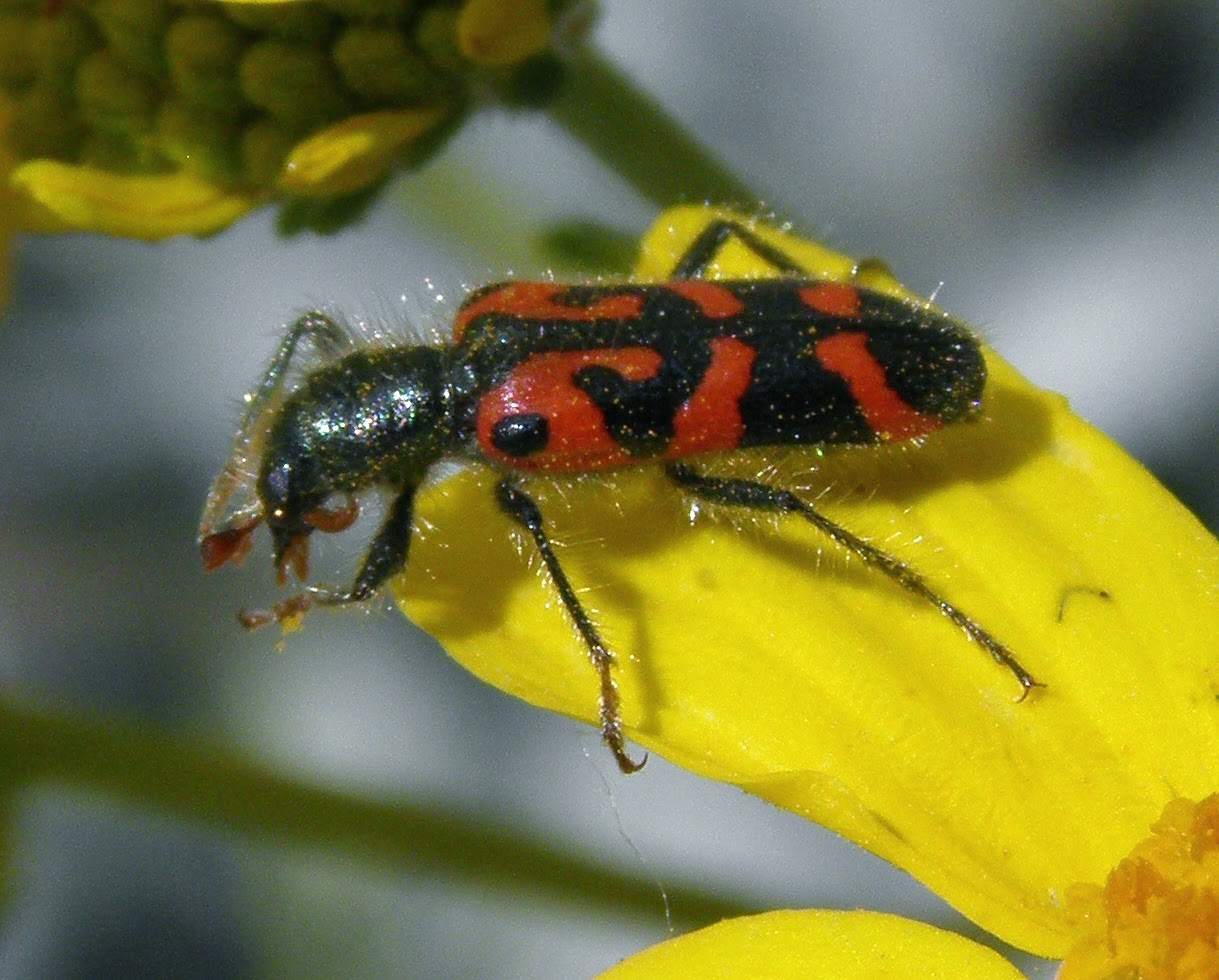 The bees were joined by a great number of Checkered Beetles, Clerids,  who were feeding on pollen and trying to find mates. Both striking color morphs were present, the bright yellow-black and the red-black version. The two forms mate freely and either color-type occurs in both sexes. I have no idea how the genetics work in this case.

A greenish black Tooth-nosed Snout Weevil occurs every spring on the brittle bush flowers in Sabino, but I have yet to find it anywhere else.

The Metallic Wood-boring Beetle Acmaeodera sphaeralceae is also a springtime regular of Sabino Canyon, but before I've found it more often on Globe mallows.

A leaf beetle on Brittle Bush leaves turned out to be a new species for my photo collection. The species is one of a few in this difficult western genus with 16 to 18 species that can be identified from a photo.

This other leaf beetle is so common on Brittle Bush that I find it every year, but its wing coloration is very variable, so the identifications on BugGuide have triggered a lot of discussion. Some years ago, I collected some in the larval stage and watched them for a while after the metamorphosis to the adult beetle: The wing pigmentation kept changing for weeks, way beyond the usual teneral stage. T. geminata seems to be the most likely species id. 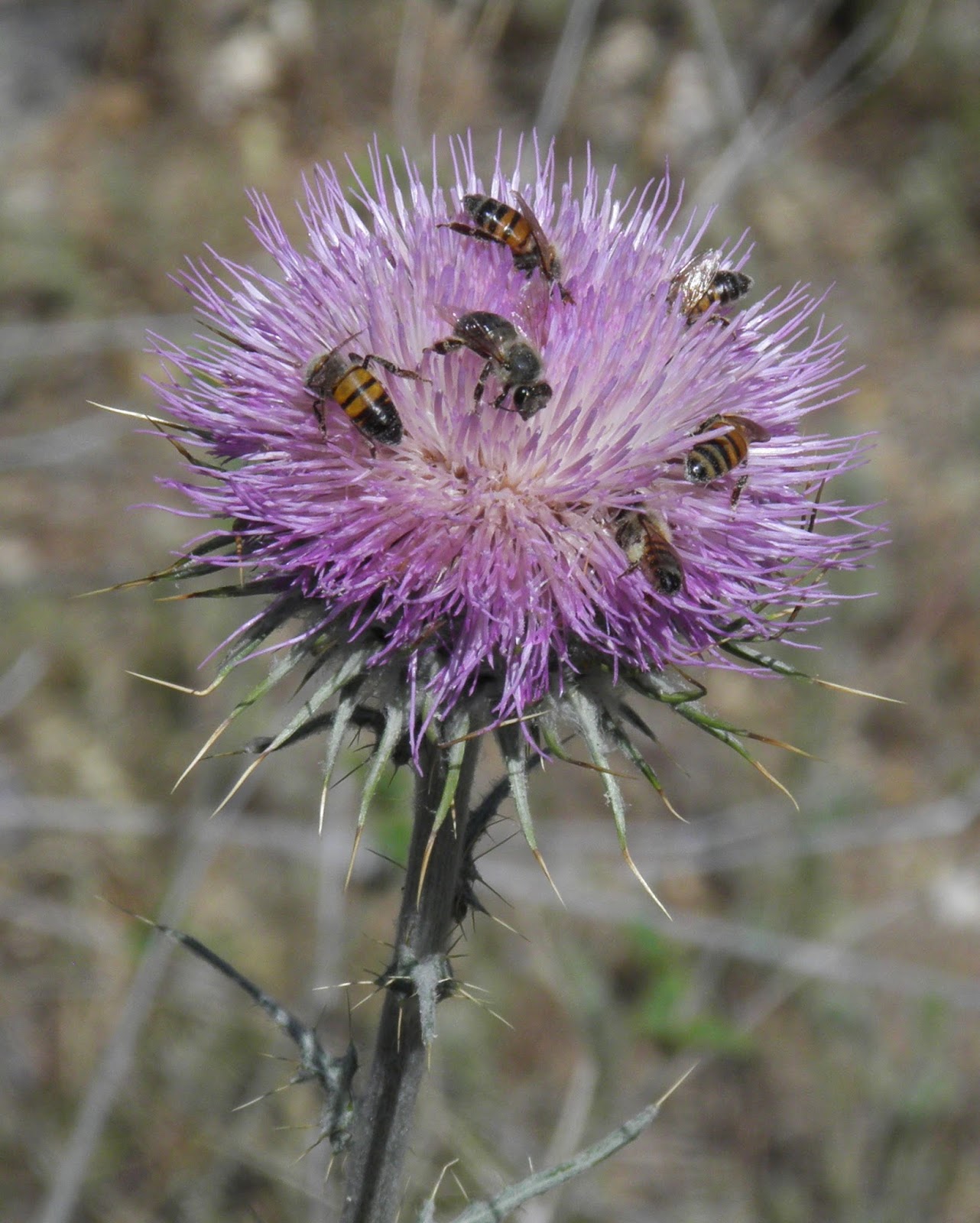 Some New Mexico Thistles were covered in Honey Bees, others hosted loads of Blister Beetles in the genus Nemognatha. 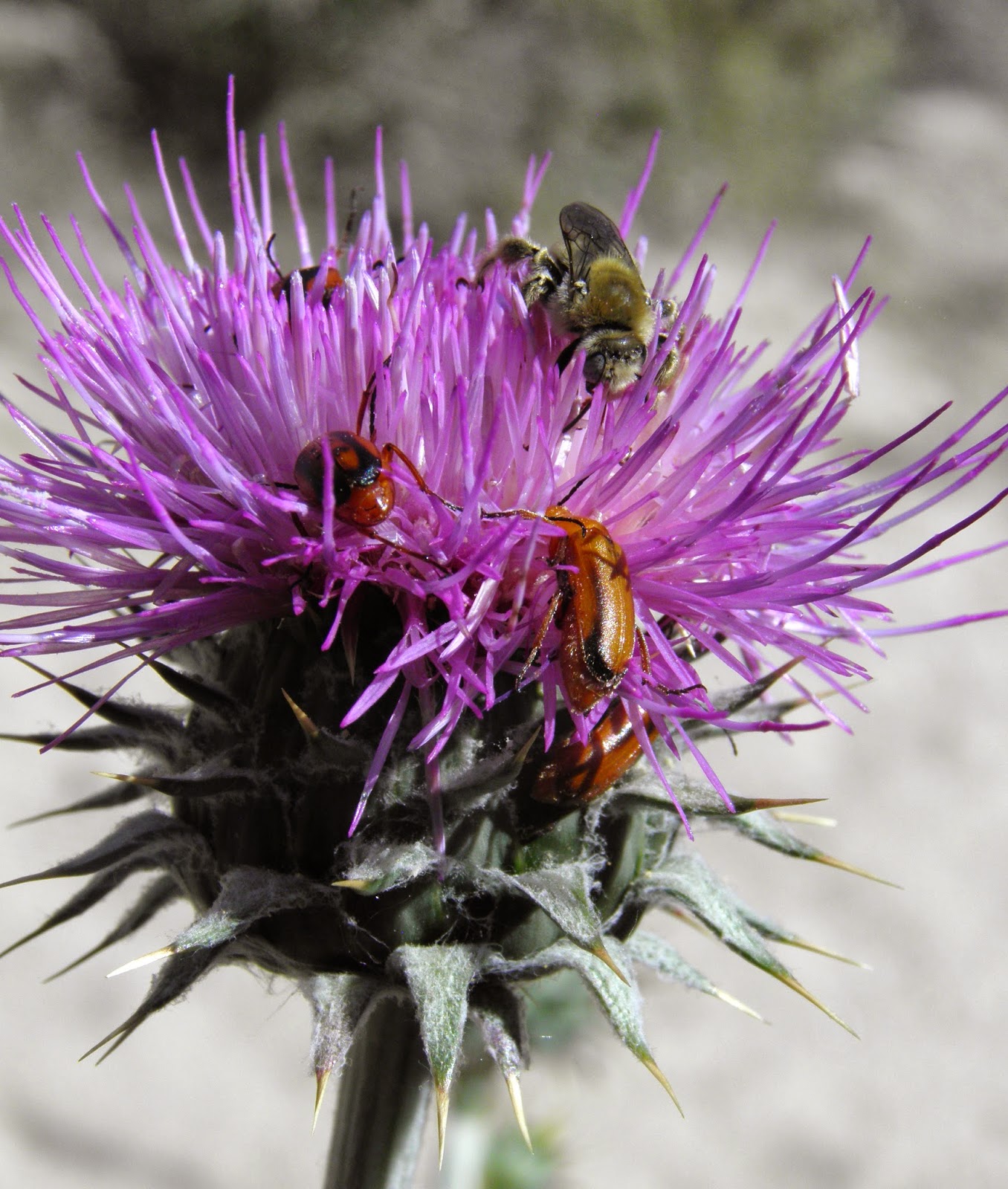 I don't think the beetles would cause a problem for Honey Bees, but the solitary Diasdasia bee above was certainly in danger of picking up a beetle larvae that would then live as a cleptoparasite in her nest and feed on the provisions that she had accumulated for her own brood. 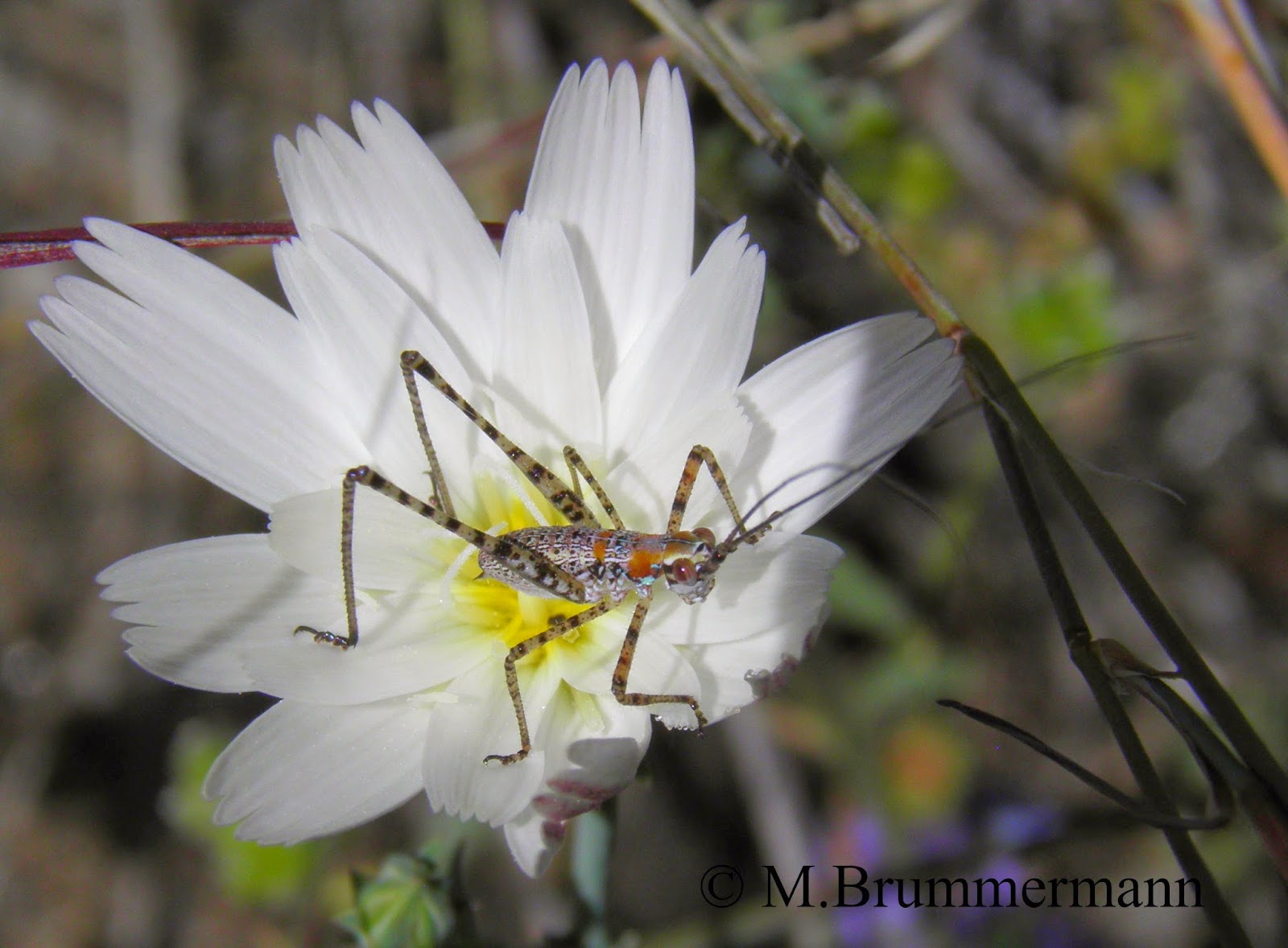 On this beautiful spring day, larvae and nymphs were everywhere. One of my favorites is the young Mexican  Bush Katydid. The adult Katydids are just green and have long wings. 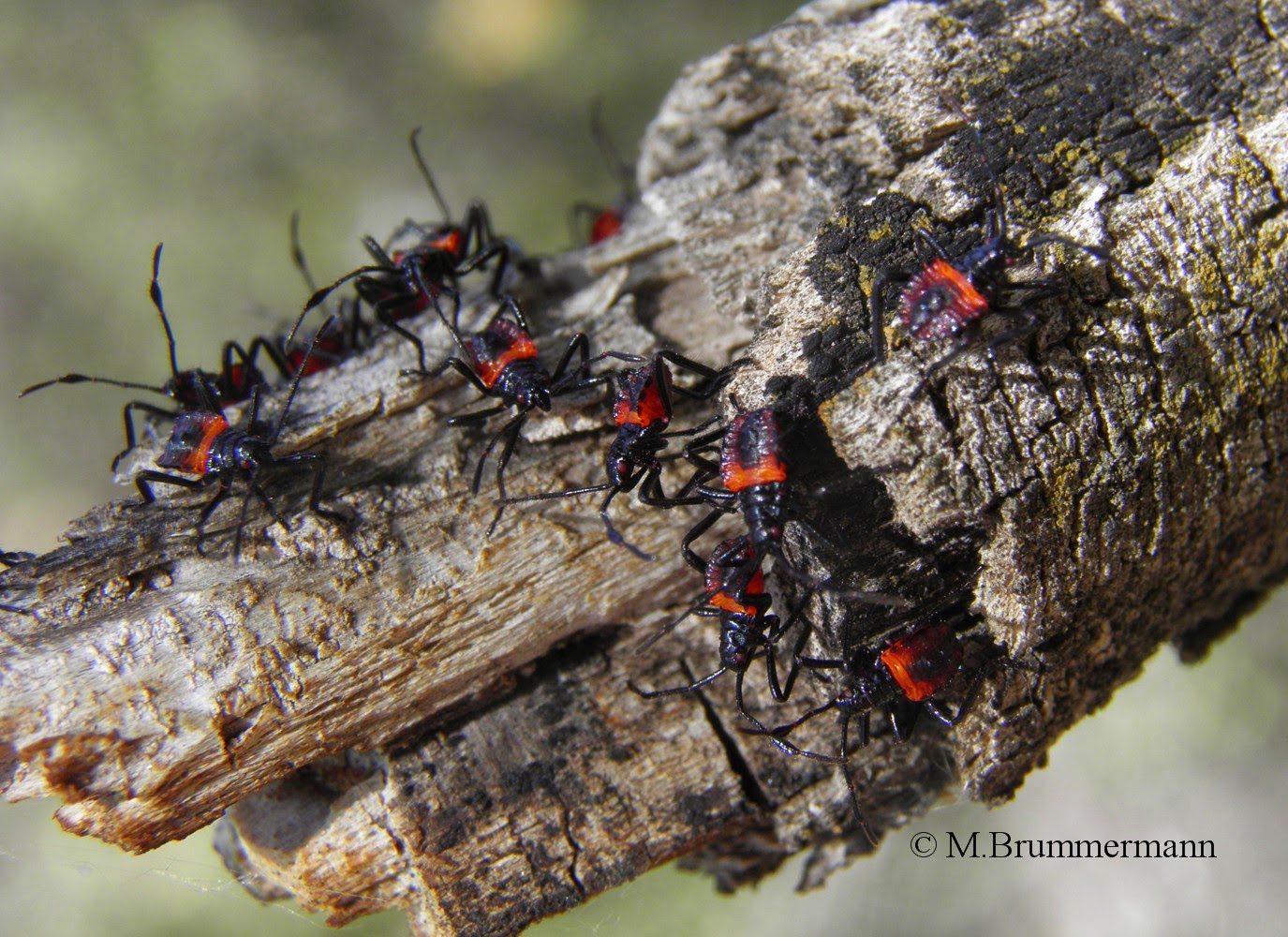 I also found the first hatched clutches of  Giant Mesquite Bugs, Thasus neocalifornicus, whose mother had left the eggs in a sheltered spot under the bark of a mesquite tree before the winter. These little guys will molt one more time and then, always as tight-nit  a group of siblings, try to reach the freshly thriving mesquite leaves.  I followed the life-cycle of Thasus in an earlier blog.

Leafbeetles on the Datura plants in the shadow of the willows by the creek were starting the next generation.

Just when the wind was kicking up in unpleasant gusts I found a couple of specimens of a rarely photographed Mason Bee. I wished my photos had come out better, but by then everything was too windswept. 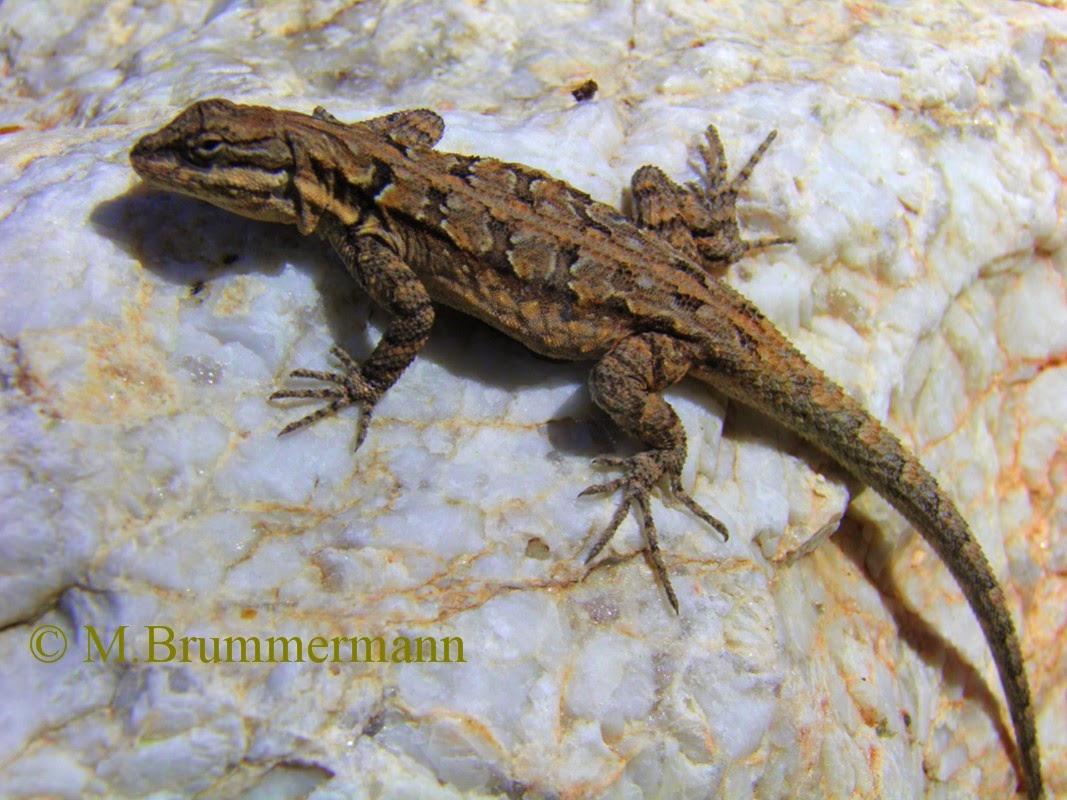 Ornate Tree Lizards were trying to warm up on light colored rocks to get ready to pounce on all those bugs.

It was after noon when I was finally back on the tram road approaching the entrance, and I remembered the turn circle for school buses where we usually found Ironcross Blister Beetles at this time of the year. Maybe it's still too early, although the little blue star flowers that attract them were  blooming. 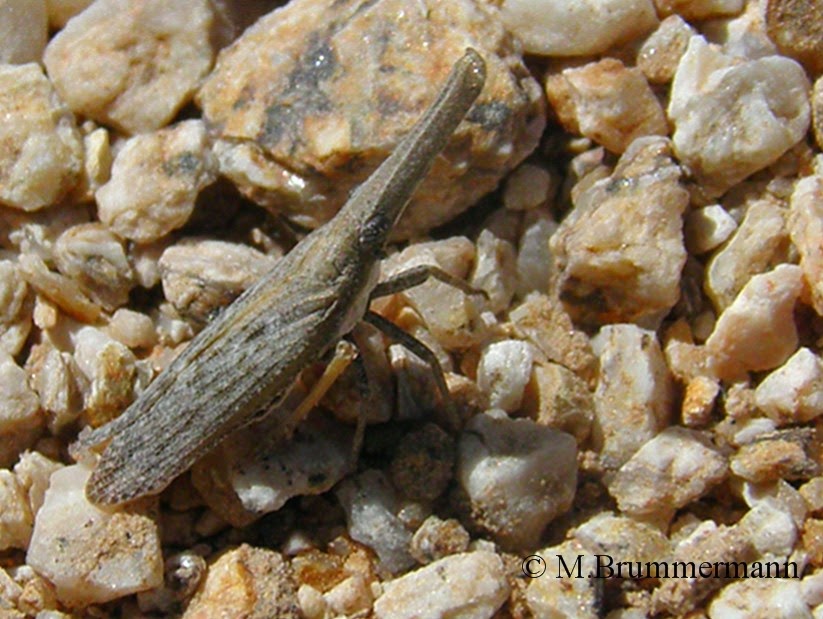 Walking along with my eyes on the ground I saw something hop that seemed to slender to be a grasshopper nymph. I found that it had to be a fulgorid planthopper, but one that I had never seen before.
Lois O'Brien confirmed it: It's Rhabdocephala brunnea, a species that is not common, even Lois has only 3 specimens in her collection.

So as always, Sabino Canyon was worth the long drive across town.
Posted by Margarethe Brummermann at 3:01 PM