It's March, and the 'garden' part of our property is erupting in color. We plant a few exotics like aloes close to the house.  They are succulent low water-users from Africa, so they do well here in Arizona. Hummingbirds, Gila Woodpeckers and Verdins love them, but as most imported flowers, they are rather useless for our endemic insects.
In our backyard the exotics are mixed with locals like Penstemon, Brittle Bush and Creosote Bushes that are all in full bloom too. Each species is visited by a distinctly different group of endemic bees and flies. 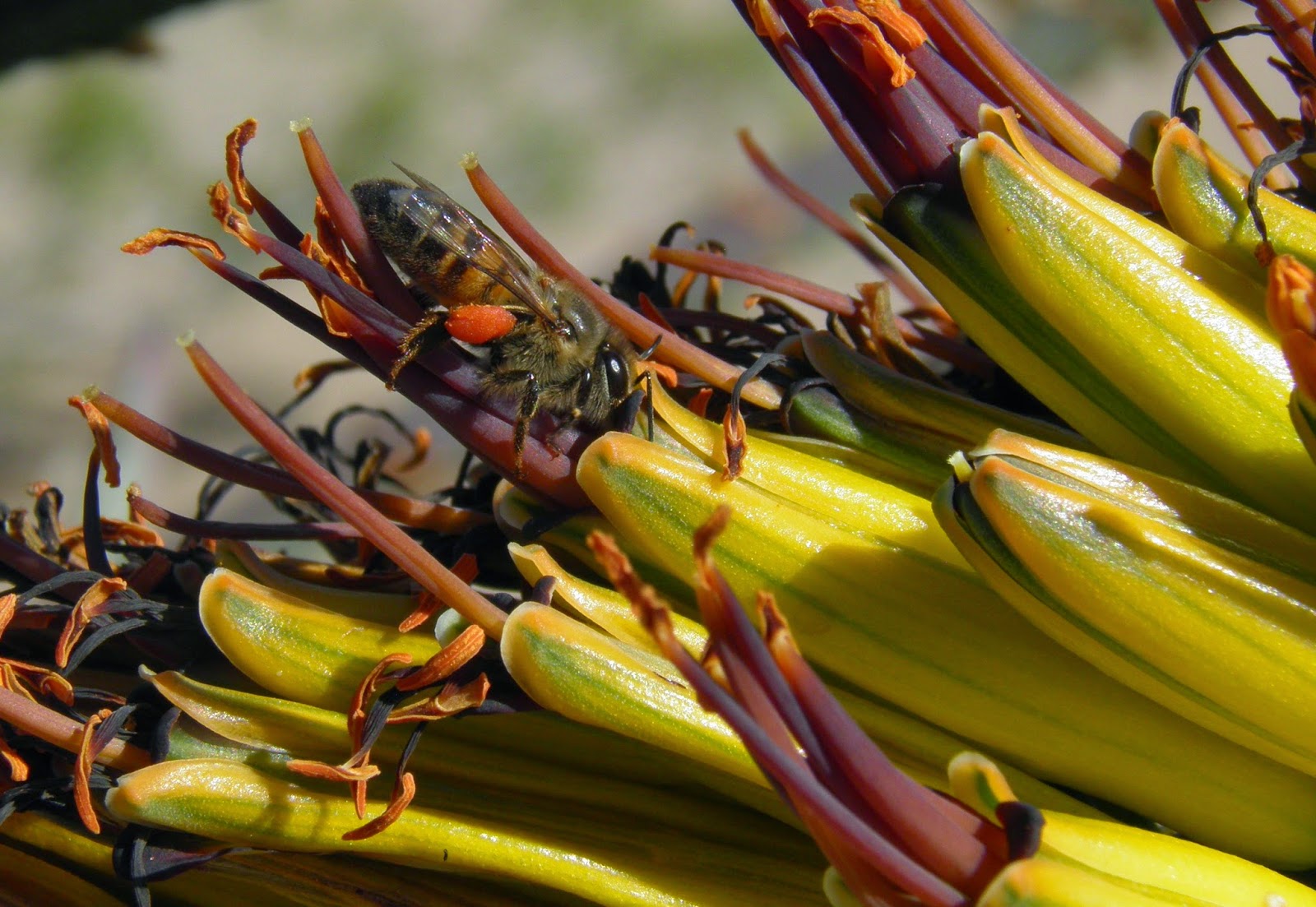 Only Honey Bees go wherever they find pollen and nectar. They are imported from Europe and the Middle East, also from Africa, so no wonder that they like Aloes flowers

On the yellow Brittle Bush discs, several species in the mining bee genus Andrena are extremely active. They were  nearly completely missing last year after a severe freeze in late February. I am not saying that the bees had not survived, but their usual synchronization with the Brittle Bush bloom was totally off. Instead, last year we saw an abundance of Sand Wasps, that are usually much rarer.

After this very warm winter the Andernas are back in their usual high numbers. Especially the males contribute to the buzz around the bushes. They try to mate with everything of the right size. Pairs in copula are nearly impossible to photograph because most mating attempts end in an undignified tumble off the flower.

Mating flies are much easier to capture, even though the next example is a tiny fruit fly. There are several species in this group, like the Sunflower Seed Maggot Fly, that lay their eggs into the developing seeds of composite flowers.

Several species in the syrphid genus Copestylum were feeding on  Brittle Bush nectar, among them the huge Mexican Cactus Fly that is a convincing Carpenter Bee mimic.

Most Copestylum species in Arizona lay their eggs in dead or injured cacti so their huge maggots can develop in the unlimited resources of for example a decaying saguaro.

The pair in the photo was actually flying around together and probably wasn't planning to use the perfectly healthy little Christmas Cholla as a larval host.

Here is another syrphid fly. While the adults of Eupeodes volucris also like nectar, they are also drawn by aphid populations on the flower stems. Aphids are the main food of the larvae.


Any place where many insects that collect and store food for their offspring regularly appear, like here Mining and Honey Bees, attracts also brood predators that want their kids to go along for the ride. These may lay eggs on the flowers or on captured males or females of the target species, or the parasite follows them home to then throws her own eggs into the open nest entrance. They are often related bees like the Nomada species above (Cleptoparasites of Andrena and others). 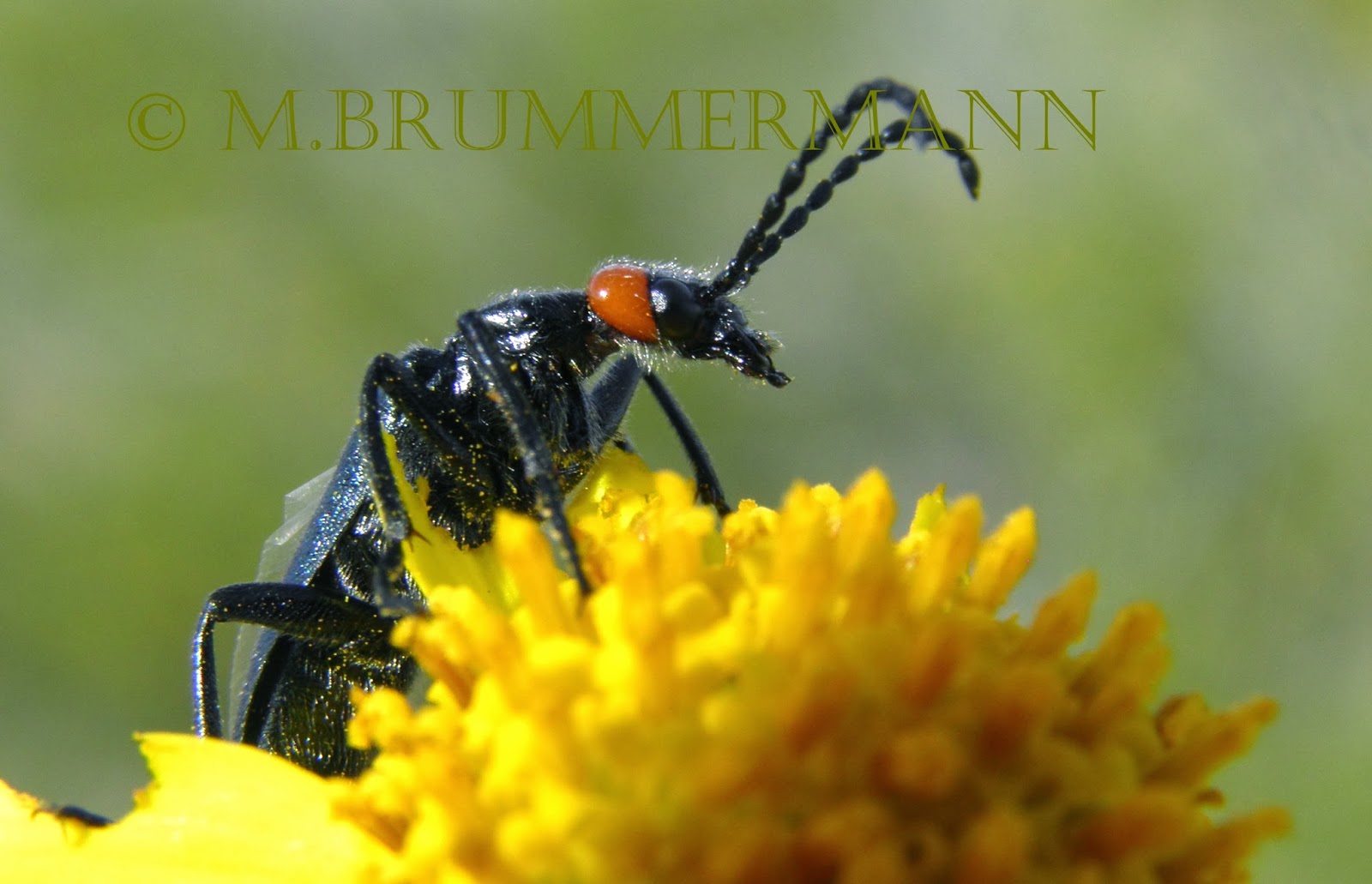 Blister beetles also lay their eggs on the underside of flowers hoping that their hatchling larvae will find their way into a bee's nest by hitching a ride on a flower-visiting adult. Lytta auriculata showed up for the first time on our Brittle Bush.

Bee fly females can often be seen hovering over the entrance of a ground bee nest, tossing their eggs into it in a characteristic forward thrust.

Of course the flower visitors are also assaulted by a number of direct predators that are waiting close to the nectar sources. I would have completely overlooked the flower crab spider in its camouflage if I hadn't seen the contrasting spec of its prey.

Ambush bugs may be much better hidden on flowers by color and shape than this assassin bug Zelus renardii, but her leafgreen color and stealthy approach give her a wider hunting range. 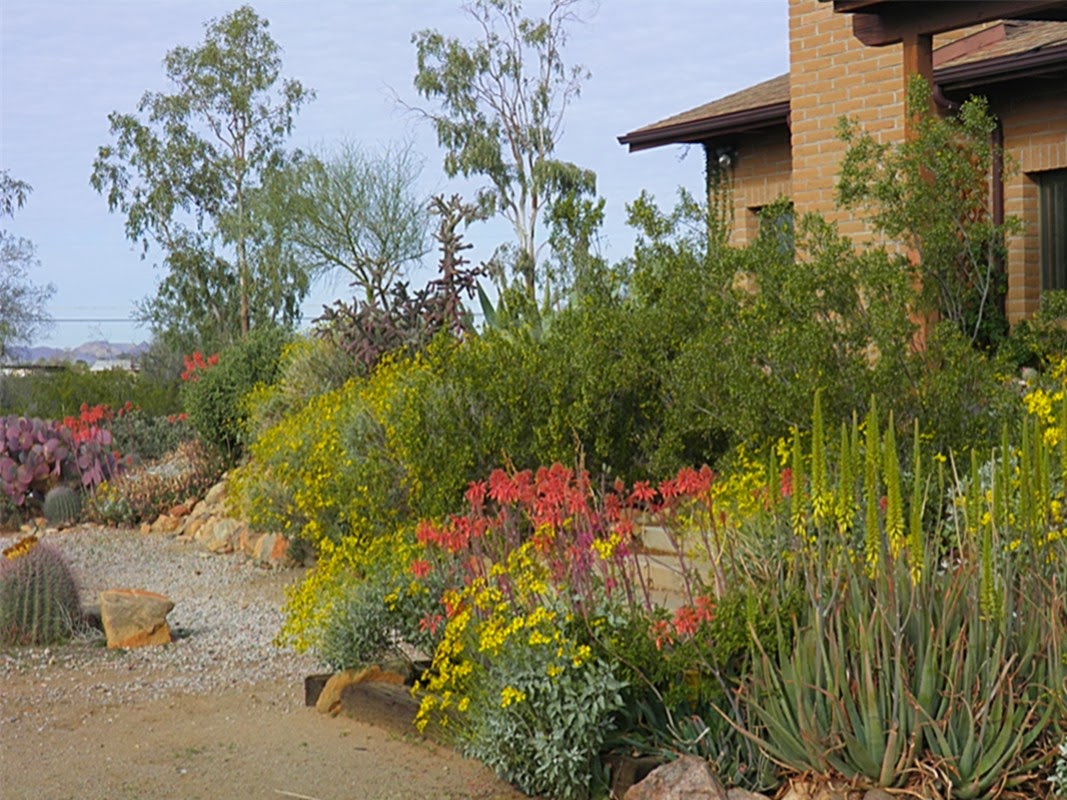 So I am looking forward to our Brittle Bush bloom every spring, and I don't mind at all that we find more young plants every year. They only grow on the artificial patio elevation anyway, I suspect that the caliche layer under the undisturbed soil does not agree with them. They pretty much dry up during between April and mid July and come alive again during the monsoon. By the time the Brittle Bush flowers are drying up and the gold finches are beginning to investigate them for seeds, the first cacti are blooming, usually Beavertail Prickly Pear and Arizona Hedgehog.

But this year the Lady Finger Cactus (Echinocereus pentalophus) has beaten them by a couple of days. Little green sweat bees, Augochlorella sp. are buzzing the flowers 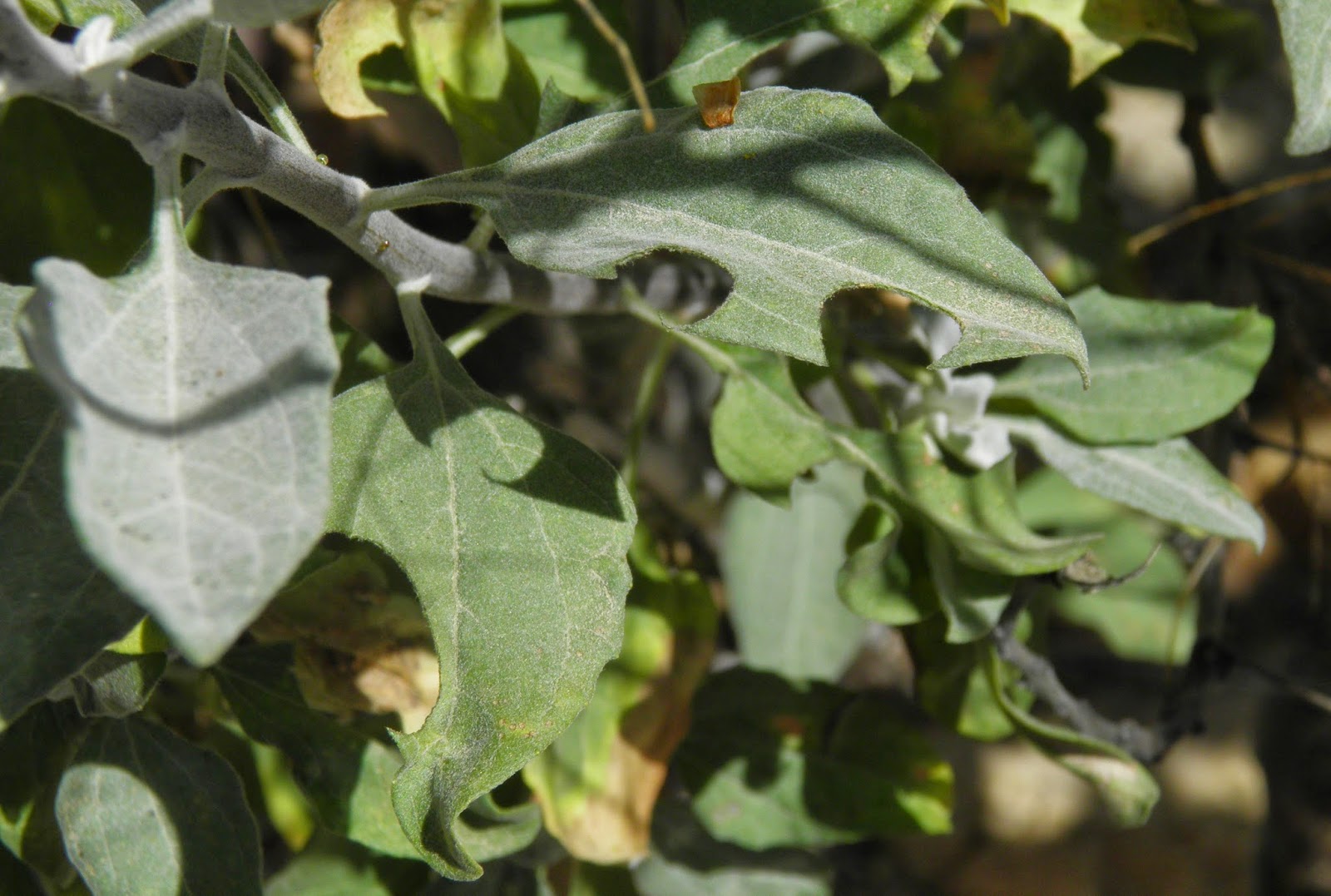 Even after the flowers are all wilted, Brittle Bush still offers something to the local bee population: Megachile Leafcutter Bees are cutting the tapestry for their nest chambers from the leafs.

Posted by Margarethe Brummermann at 6:35 PM