Our rattlesnake count for 2013 is finally going up. After several months without any visitors we first had the little one that the quail family pointed out. Then two nights ago, Randy, barefoot in sandals, stepped on a Diamondback that was concealed among some garden hoses on the brick terrace in front of the house. My husband is now turning on his flash light, not just carrying it. The rattler hid in a thicket of barrio petunias and could not be convinced to come out. 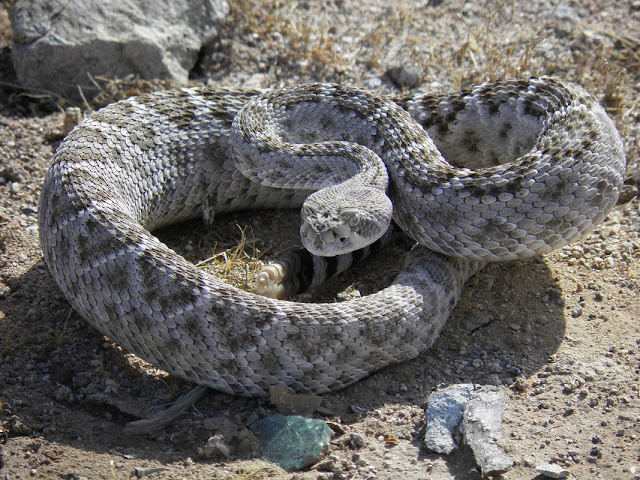 This morning a big rattler struck at Frodo on the steps of the back patio. It happened so fast, I heard a hiss but at first no rattle. Frodo has finally learned to fear rattlers (after 7 or 8 bites) and he backed off unharmed, only to let Cody take over the snake-barking duty. That rattler (photo) we carried out to the old lime stone quarry. When we crossed our fence to the state land the horses heard the rattle from the transport bin which has great accoustics. They threw up their heads and spooked with Cody in deliriously happy persuit.

When released from the bin, the snake recoiled and rattled. Trying to encourage him to move on, I threw some dry horse manure and sticks, not hitting him but very close. He didn't react at all to the flying objects, just kept his head turned toward me ready to strike. Maybe the  heat-sensing "pits" on his face read my thermal radiation and told him where the living threat was, or he could smell me. Looking at the photo I think his eyes look filmed over, so he may have been temporarily blind because he's close to shedding his skin. I'm wondering: what information do the heat sensors provide when the environmental temperature raises above the core temperature of an endotherm bird or mammal? Of course the rattlers are mainly night active in summer. 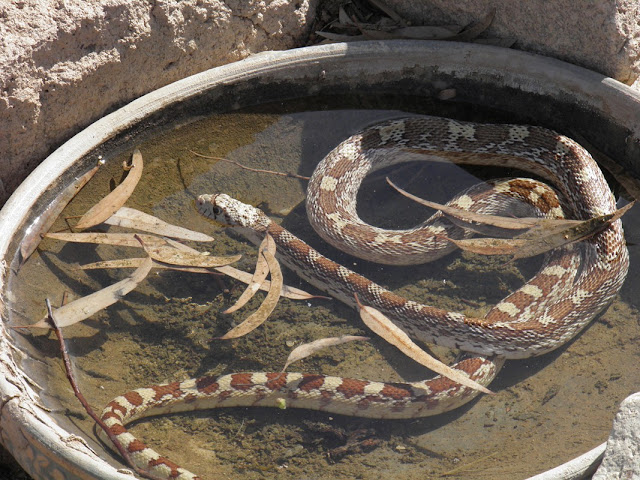 On the way home I was speculating how to test my theory (the one about the ignored inanimate clods of horse manure) on a non-viper, when Randy said "Like this one? Camera??"
A four to five foot Gophersnake was beginning his day with a dip in our bird bath. He was lying quietly, and as I watched him breathing while all of his body remained submersed, I found another physiological problem to ponder: He seemed to pump the air rythmically from his gular and neck region into his elongated lung (click to see video).  The entire rest of the body was lying completely motionless. I had never noticed this 'air gulping' in snakes before, just in amphibians. When the snakes left the water, its breathing movement became invisible.
Answer:  the lungs of a snake are usually ventilated almost exclusively by its axial musculature. That is the same musculature that is used for locomotion. What I saw in my 'water snake' was buccal pumping which is indeed a form of swallowing air  (into the lungs, not the digestive tract). It is used in situations where axial breathing is not feasable.

Another question: how do these constrictors breathe while they are squeezing the life out of a squirrel or bunny? How do they manage not to suffocate themselves? Buccal pumping doesn't seem possible then either, because the mouth is open. Maybe snakes, being heterotherm, just need so much less oxigen than their warmblooded prey that they can afford not to breath during this act. But what if the prey is a lizard?
Posted by Margarethe Brummermann at 11:01 AM