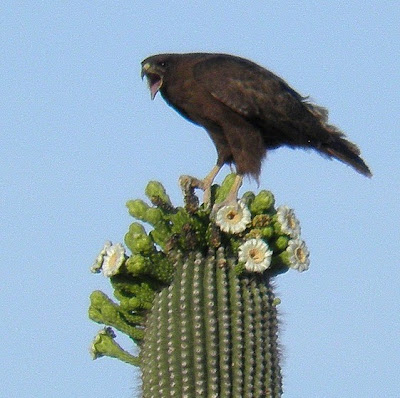 Two days ago before breakfast we went to visit the Red-tail nest. Something was different: the female wasn't  as usual high up in the sky, but in a saguaro close to the nest. Sporadically she screamed at me - that was not so unusual. 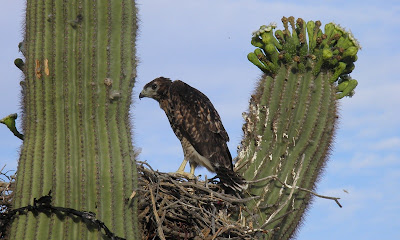 But then, there was only one lonely chick in the nest. It seemed to be the smaller of the two. Doesn't he look unhappy? Like he was left behind? Sure enough, the other chick had left the nest. He was sitting not far away out in the open - looked very much like he had sailed off the nest, but couldn't really fly yet.


Feisty and healthy looking, he threw himself on his back to show me his needle sharp talons when I approached. I have worked at raptor rehabilitation stations here and in Germany. We received many little guys like that. Even if they start eating, which they usually do, they often arrive with broken pinion feathers and don't learn to fly properly because those are not replaced before the next molt - in a year I believe. I checked him out and put him under a shady tree right next to the nest saguaro.  His mother was right there, if the sun didn't kill him, he had a chance.

But for two days, I wondered whether I shouldn't have brought him to a rehabilitation center. I do believe that a lot of chicks that well-meaning people pick up would survive just fine where they were found. I also knew that he was vigorous enough to fend off a coyote - they have easier prey right now and will not risk any injury. He was used to the sun because there wasn't much shade at the nest either. If he stayed under the tree he might also escape the great horned owls who seem to be hunting closer to our little mountain lately anyway. And yet... 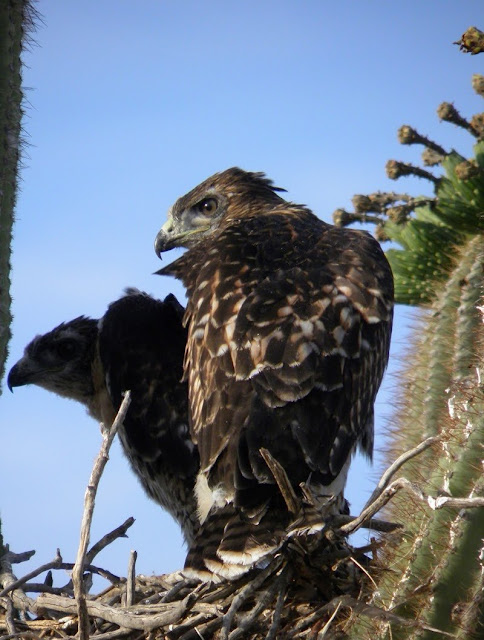 This evening I finally made up my mind to find out what happened. I really dreaded going out there. Around sunset the adults are often nowhere to be seen, so at least I wouldn't upset them. From a great distance, I could see a chick standing tall in the nest. But - there seemed to be another dark shape with him. It could have been the ugly black plastic bag sticking up? Or the mother? I walked in a wide circle to get better light. Finally it was quite clear: the older chick had made his way back up into the nest, he (or she) had even reclaimed her favorite spot on the west side of the roost. She couldn't have climbed up, she must have flown, short wings or not. Maybe she managed to climb up the tree and then fluttered back from an elevated spot..


Posted by Margarethe Brummermann at 7:50 PM