The last chick to fledge 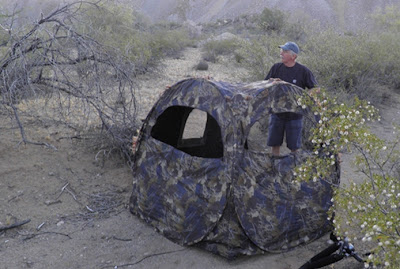 On May 9th wildlife biologist and photographer Bruce Taubert set up a blind in our backyard. At this time only one kestrel chick remained in the nest. Although it was constantly chirping and begging, only the male kestrel came to feed it a couple of times between 8 am and 12 pm.  He was always in and out so quickly that it was hard to get a good shot, even with Bruce's great set-up. This was a day with very strange weather. Around noon the sky went from gray to black, there was dry lightning, and the wind grew into a steady gale of 50 mi per hour. Dust and sand were flying until the visibility was close to zero. I was glad that Bruce had given up his vigil around noon when there was nearly no activity around the nest.
The next day began with a clear Arizona sunrise. I was very happy to hear sounds from the nest where the last chick was demanding his breakfast. The feedings seemed to increase somewhat in frequency, maybe because there were more lizards out due to the better weather. We never saw the female again. 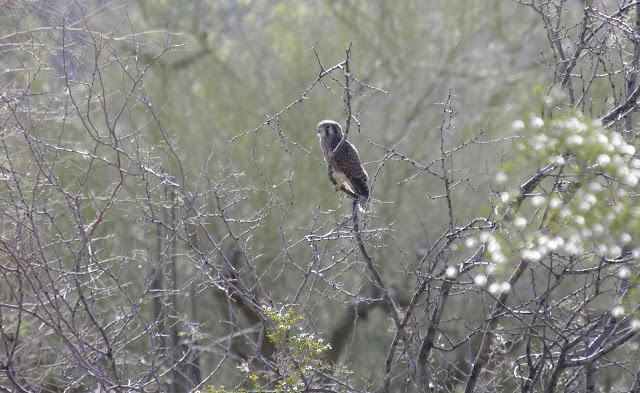 For three more days, the male kept supplying the single chick in the nest. This morning, on the 13th, I found the little guy sitting about 15 meters from the nest, sitting nice and upright in a bush, even though his eyes fell shut at times. Half an hour later he had disappeared. All day, there were ravens and the Cooper's hawk around... 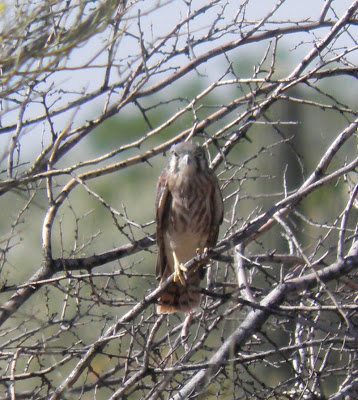 But at dusk, when the Night Hawks came through on their daily migration to the river, I heard a begging call. Sure enough, the chick was back, close to the nest in the dead Palo Verde, asking the falcon like passers-by for hand-outs. 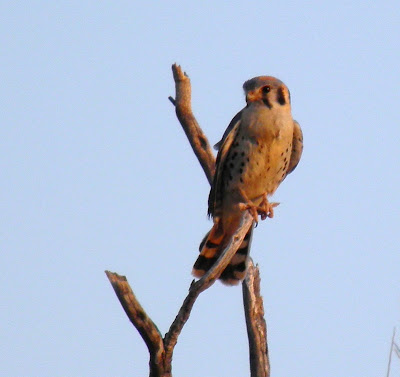 His dad was right there with some prey, and he stayed close by after the feeding, so I'm very hopeful for the little guy.
Posted by Margarethe Brummermann at 11:53 PM