Not for the squeamish

Coleoptera (Beetles) are the largest and arguably most successful order in the animal kingdom. The extreme variety in physique and behavior found among beetles results from adaptations to nearly every conceivable ecological niche found in  terrestrial and aquatic habitats.  The eating habits of coleoptera species range from total abstinence in adult life  to absolute gluttony. Some beetles have a highly specialized diet while others are opportunistic omnivores. Beetles hunt animals, have their brood raised by foster parents, care for their larvae or abandon their eggs, destroy stored seeds and grain, prune plants and stimulate rejuvenating regrowth, feed on nectar while pollinating their hosts,  have wood boring Larvae, break down organic material and feces and further decomposition, and beetles also take care of dead bodies.

Beetles in the genus Nicrophorus will bury small corpses of birds and rodents to give their larvae the exclusive rights to the food source. In Southern Arizona these species are much rarer than in moister climates, but I have found a couple at lights during cool humid nights at higher elevations.


Other beetles come to bigger dead bodies in different stages of decay. Forensic Entomologists use the strict sequence of species arrival as evidence for the timeline of a killing. 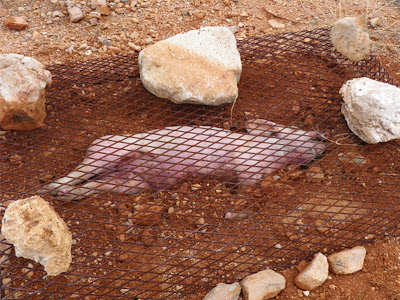 One of the workshops at our last SASI meeting studied for several days insects at the corpse of a dead pig that was (astonishingly) placed right outside the conference hotel.

On our bug hunting trips into the Arizona grasslands we sometimes come across carcasses of cows that are nearly mummified by the dry heat. Entomologists like Eric Eaton know that those can be treasure troves for bug hunters, but I usually stand politely back behind the more enthusiastic colleges. A succession of Carrion and Carpet Beetles, Rove Beetles, a species of Checkered Beetles, Hide and Clown Beetles and a few Scarabs  can usually be found. 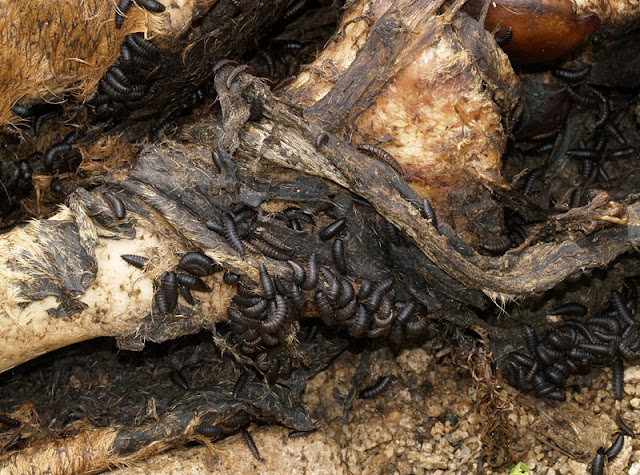 The larvae of  Dermestes marmoratus  form at times a dense layer covering most of the carcass. Forensic labs make use of their voracious appetite to quickly and thoroughly clean bones.


The adult beetles find carcasses through their acute sense of smell, congregate, mate, and the females lay their multitude of eggs.

After the dermestids are done with the softer parts, the tough hide still attracts the scarab related Hide Beetles, Trogidae. When disturbed they can withdraw legs and heads like tortoises.


Red Legged Ham Beetles (Cleridae) don't seem to make any difference between an Arizona cow or an Egyptian pharaoh, as they were also found in the wrappings of ancient mummies. They stay around when even the Hide Beetles are gone.

Not just the state of decomposition, but also the biological class of the dead animal seems to matter to some beetles. While mouse and small bird carcasses attract several Nicrophorus species, and the larvae on the dead cow were probably predominantly Dermestes marmoratus, I have found only Tanatopilus truncatus and Dermestes caninus on dead snakes in Arizona.

The smell of dead fish, often used as bait in pit falls, works for a number of carrion species but also attracts  dung beetles (scarabs).
I hope this detailed description of beetles on carrion did not gross you out too much. These beetles play a very important role in the ecological system, and the existence of at least one species is threatened in the US . It's endangered status inspired this imaginative campaign: 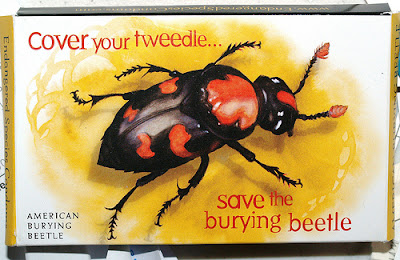