Collecting trip to the Pinaleño Mountains 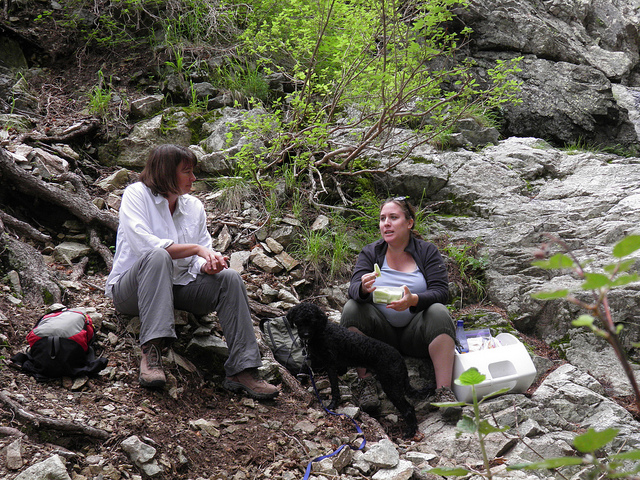 I spent the last weekend with Wendy Moore's entomology lab group camping in the Pinaleño Mountains in eastern Arizona. The Pinaleños, often just called Mt Graham after the name of their most prominent peak, are the largest of our Sonoran Desert Sky-islands. Of all the sky islands, the Pinaleños have the greatest expanse of mixed conifer habitat. Smaller areas of this plant society are also found in the Catalinas (Mt Bigelow and Mt Lemmon, and in patches on other sky-islands). This habitat is home to several rather rare carabids, Wendy Moore's main research focus.

Other research  interests in our group ranged from general ecology of the sky islands, conifer botany, rare scorpion and pseudoscorpion species, flightless beetles (mostly tenebrionids and carabids), minute fungus eating beetles, to general insect photography, and later we were joined by a cerambycid geneticist from Cornell.
Collection methods varied accordingly, from gleaning and substrate sifting to black lighting with a sheet for night flying insects, to searching with bright headlights for night active beetles and uv-flash lights for fluorescing scorpions,  to setting pit-fall traps, peeling lots of bark and rolling many logs.We also tried to cover  different elevations,  including the oak juniper region further down the mountain (Noon Creek Campground)

I found it difficult to choose which of the many species we found would be the most interesting ones to introduce here.  So I will show only a few that fascinated  us most and in addition post links to my flickr sets that show all my photos from the trip.


When you click on the links and flickr tells you that imbedding links is not permitted, just go to 'click here'. To see more than the initial thumbnails choose 'detail' or 'slideshow'.

We are still working on the identifications of some species, so you may want to visit again later if you are curious. For completeness, I have augmented the actual Mt. Graham photos with a couple  of pictures from other sites. Those are of insects that I have frequently  found before and did not photograph again on this trip.

We all came back tired and dirty and very satisfied with our finds. I added at least half a dozen new species to my virtual Arizona beetle collection that will hopefully result in an Arizona Beetle Atlas.  I posted some of my photos on bugguide and found out that one of the Elateridae is a new species currently being described, and that another researcher was hoping that I collected the pretty hairy caterpillar for his genetic research (I didn't).