Nothing is what it seems at Willcox Playa

August 8, 2010.Charlie O'Brien and I arrived at Willcox Playa around ten thirty and the temperature was already climbing into the upper nineties. On the flat salt pan, there is not much shade. The white sand reflects the sun and seems to double its intensity. Looking for bugs, we spent a lot of time close to the radiantly hot ground. Cooling off in the air-conditioned car between stops kept us going. 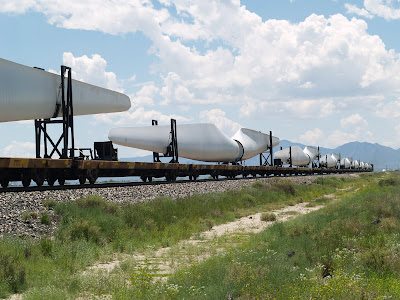 A dirt road parallels the tracks of the Union Pacific Railroad. We followed along with a shipment of huge windmill blades going to California. Far ahead, water was rushing. Across the road? We could see it churning and spilling down from the higher eastern embankment. Charlie and I couldn't quite agree where it was coming from. It seemed to be spouting out of a huge pipeline. But the closer we got, the smaller the stream of water became. Finally, there was no water crossing the road at all. All we found was a muddy pool of standing water on the west side of the road. Everything else, a mirage. 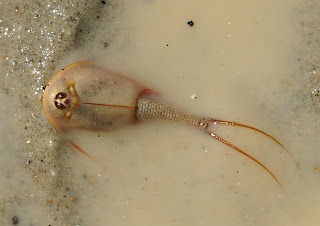 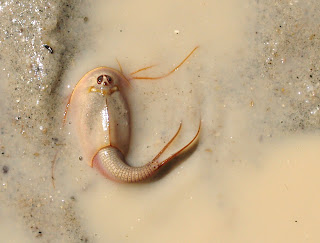 Those temporary pools of murky rainwater were full of life. Little pulsating openings turned out to be the mouths of big golden tadpoles, floating up-side-down while skimming debris off the surface and probably gulping air into their developing lungs. Just when my brain had formed the search image 'tadpole' I realized that some of the creatures had oddly segmented tails. Tadpole Shrimp (Triops sp.)! Dormant eggs had been hidden in the dry sand since the last flood maybe a year or two ago. The recent rains made them hatch and the little crustaceans developed within days in warm standing water. They have to race through their whole life cycle and produce new eggs before the temporary desert ponds dry out again. They have done this in nearly unchanged form for the last 70 million years and are considered the oldest animal species on earth. I had read about these predatory living fossils, but I had no idea that they would be so big (about 3 cm). 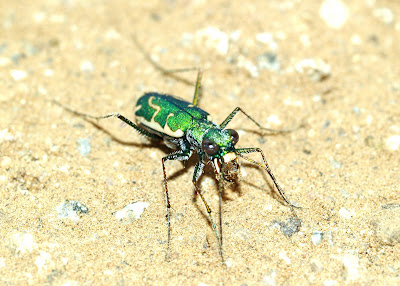 Metallic green insects, nearly invisible in the glare of sun on white sand, were running and flying like wasps or flies along the water's edge. I didn't fall for that deception: Tiger Beetles were my main interest on this trip. 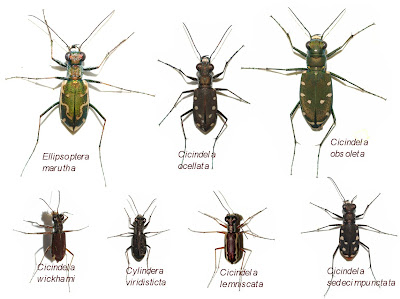 We caught 4 species but we saw many more. They had the wind on their side: it kept blowing any that flew up out of reach across the water. Some additional species came to the black light at night at Twin Lakes. We'll have to return for the other 70 or so species. 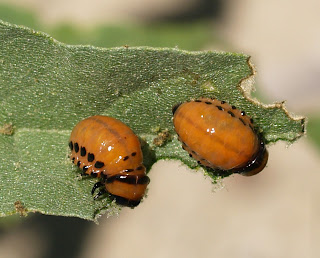 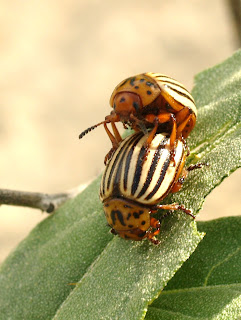 The rains had also triggered many wild flower seeds to sprout. The dominant plant, a purple-blooming nightshade, seemed to be already covered in reddish berries (most likely poisonous). Or were they Lady Bugs? They turned out to be the larvae of Ten-lined Potato Beetles, Leptinotarsa decemlineata. I assume that they can advertise their presence with their contrasting colors because they are as indigestible to predators as their alkaloid-loaded host plant. Their similarity to bad tasting Lady Bugs may enhance the protection (Müllerian mimicry) 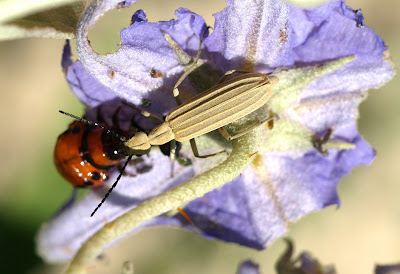 At closer inspection, some of the narrow, silvery buds of the nightshade turned out to be beetles that fit exactly in color, shape and even venation: Epicauta tricostata (above and below, left). These are blister beetles, with chemical defenses of their own and probably rather safe, even if their cover is blown. 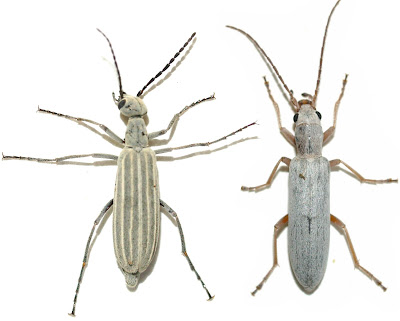 But some of the beetles were just harmless imitators: False Blister Beetles, Oedemeridae (above, right). The silvery white color of both beetle species is of course not just cryptic or deceptive: like the surface of the silvery leaves of the nightshades, it serves as sun protection. 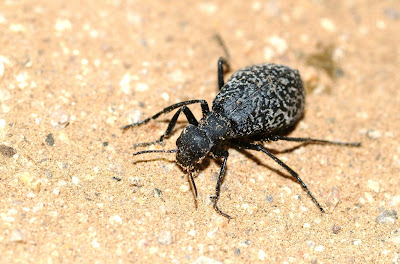 Something was running on the ground between the wide-spaced grasses. It looked nearly like a fairly big spider and certainly acted like one. So at first I hesitated to reach for it, just long enough to let it get away. Then, of course, we caught it in a container. It turned out to be another Meloid, Negalius mamoratus (all Meloid ids by John Pinto). This one was dark, but an air cushion under slightly inflated elytra seemed to efficiently protect it from overheating by radiation. 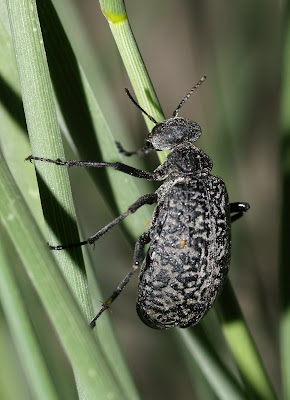 There is a narrow range of optimal temperatures for any ectotherm, active organisms. We noticed later that these beetles climb up into higher grasses to sleep as soon as it gets to cool to keep the running-spider illusion going. 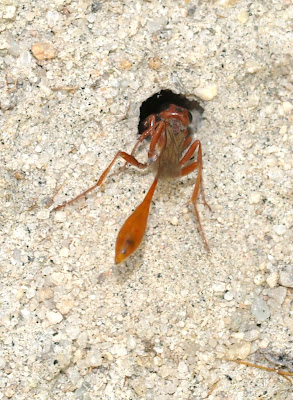 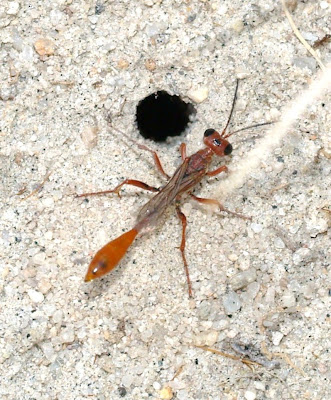 At Twin Lakes, a bare, round sandy spot of several feet diameter with an off-center entrance hole seemed to indicate a Harvester Ant nest. After some painful experiences, I approach those only carefully. But I always check around them for Anteater Scarabs, genus Chremastocheilus. So far without luck, so that will be another story. This time the entrance hole, while in the right location of the arena, was quite small and very round. Only a single hymenopteran was working, a harvester-ant-mimicking Ammophila wasp (A. formicoides or A. wrightii. thanks, Eric Eaton for the id options). She slipped inside, grabbed an 'armful' of sand, moved all the way to the outside of the flat area to drop her load on an inconspicuous slope, and immediately returned for more. She kept using the same dump site and her times inside the hole kept getting longer and longer as she dug deeper. Eventually she'll catch and paralyze a caterpillar, drag it into her hole, lay an egg on it and seal the chamber. Her larva will develop inside the living, paralyzed host until she pupates and then hatches as another winged huntress. 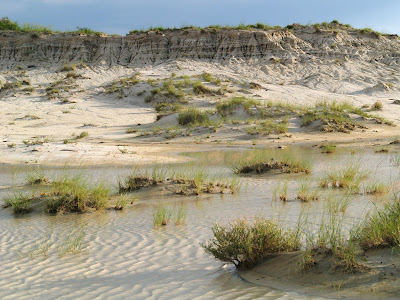 We moved on to the dunes of Blue Sky Road. By now it was afternoon and a thunderstorm over the Chiricahuas sent chilling blasts of wind into the Playa and the sun dissapeared behind clouds. All around the dayactive insects were retiring. A beetle in the genus Rhipiphoris nearly had me believe that he was a wasp - with his long clear wings, reduced elytra, imitation of a hymenopteran waist, and huge shiny eyes, and the way he was clinging to a dry stick just like a sleepy wasp in the evening . 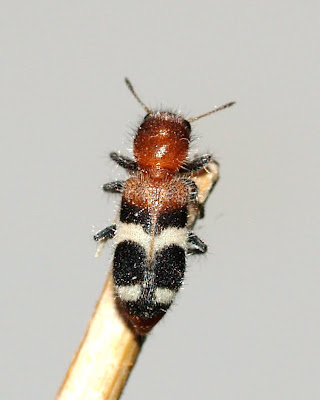 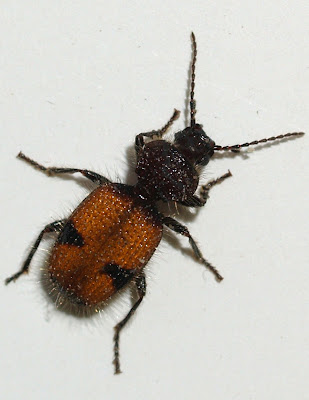 A small fuzzy Clerid, Enoclerus analis (ID Jaques Rifkind), hanging on a blade of dry grass, and a dusk active Carabid, Panagaeus relative Micrixys distincta (Haldeman), running on the ground, gave both convincing imitations of female velvet ants that are famous for their painful sting. 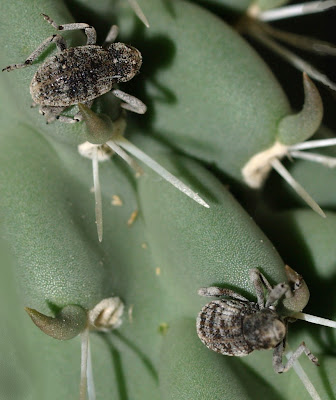 On a Cholla Cactus several weevils of the species Gerstaeckeria unicolor were clinging to the tufts of glochids where they were nearly invisible, except to a weevil expert like Charlie who knows exactly where to look. 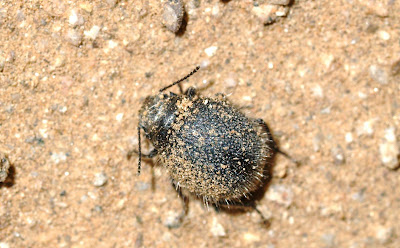 A round, moving dot in the sand could have been a tumbling seed or maybe a spider, but the little hairy Tenebrionid Edrotes arens did not at all look like a beetle. 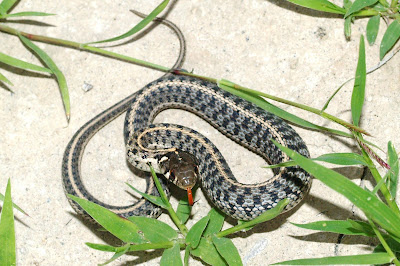 Finally Charlie scared up a very pretty Checkered Garter Snake, Thamnophis marcianus. These shy reptiles usually just glide away as fast as possible. Instead, this one tried to intimidate us by taking the defensive stance of a rattler. 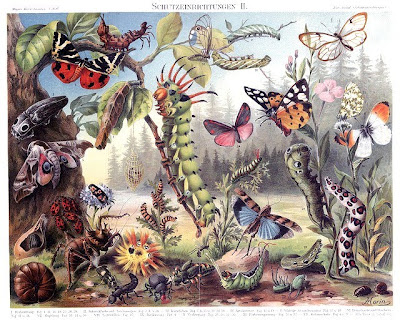 Mimicry, warning colors, cryptic shapes and behaviors, camouflage colors and patterns, and protective behaviors are used by animals of all habitats. Just check out the page from an old German Lexicon. But at Willcox Playa, deception seems to be the rule. There, due to a complete lack of cover, everyone has to hide in plain sight.
Posted by Margarethe Brummermann at 3:19 PM