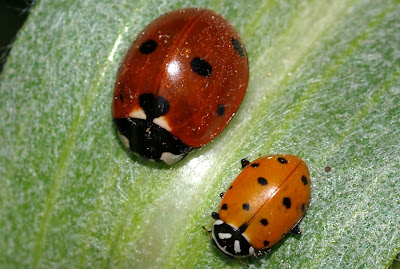 "Is he getting any bigger than this?" "Is this a young Lady Bug?" These are questions that I hear very often. The answer is of course that adult beetles do not grow, and the lady bugs are two different species. 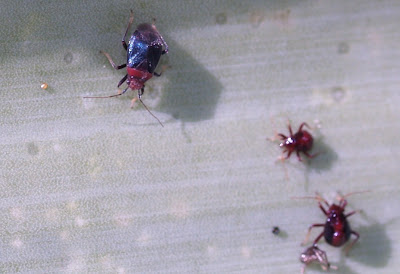 I also often hear the description that "Big beetles were surrounded by their little ones". In this case the omni-present term 'Bug' would have been a better fit, because this person had most likely seen a group of True Bugs. Bugs do indeed often care for their off-spring, and those kids do resemble their parents. True Bugs undergo an incomplete metamorphosis as described in an earlier blog chapter. Visit also Ashley Wood's photo stream who followed the life cycle of many European bug species in beautifully detailed drawings 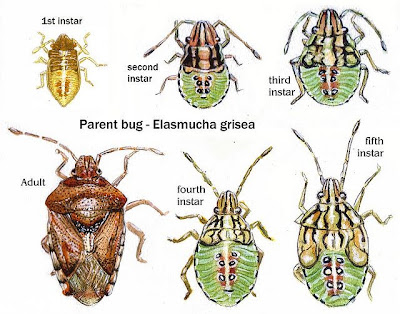 Larval stages of a Stink Bug by A. Wood

Young beetles, however, bear no similarity to their parents. Insects that have the full, hard wing covers that identify them as beetles, are adults and do not grow. If they are small, and some are barely a millimeter long, they stay that way, and make the life of a beetle photographer very difficult. Beetles, like butterflies, flies, and bees and wasps, undergo a complete metamorphosis. 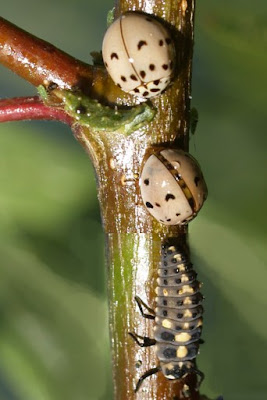 Like all insects, beetles lay eggs. They are usually deposited on or close to the food that the hatching larvae will eat and that's all the care most beetle off-spring will receive. After hatching, beetle larvae feed voraciously. Growing and storing energy is their only purpose in life. Most are not very invested in locomotion, their legs are short and their bodies are huge. Well developed mouth-parts deliver food to the intestinal system that seems to take up most of the segmented, elongated body.
Beetle larvae live in almost all biological niches imaginable. Some live as predators in leaf-litter, under tree bark, and in fresh water, and even on flowers. 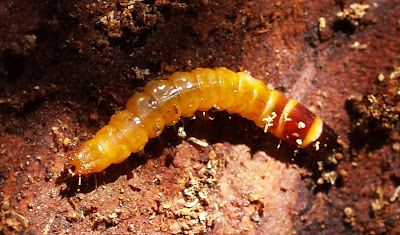 Predators, of course, move well and have well developed sensory organs to find their prey. 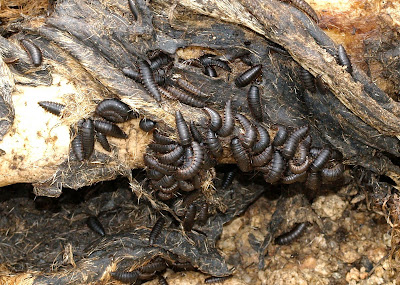 Many beetle larvae are invaluable for the decomposition of dead animals, feces, and dead plant material. 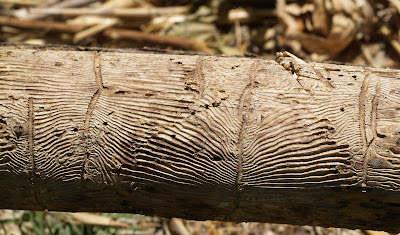 Some live protected in the nests of other insect species as brood parasites, devouring provisions and off-spring alike. Others live off living plant parts, boring or mining inside wood, fruits or leaves

Leaf beetle larvae: cryptic (left), aposematic (middle), actively disgusting holding excrement package (right)
The ones that are chewing away openly on the outside are usually protected by cryptic, mimetic or aposematic colors, shapes, and or behaviors. Some even build their own protective cases. 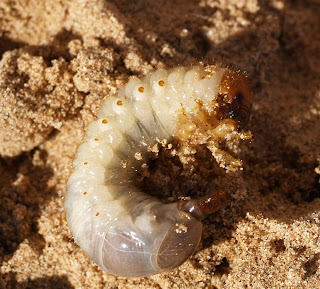 Cellulose feeders like many scarab larvae tend to be especially big: they not only eat very bulky food, they also house a whole world of cellulose digesting symbiotic organisms in their guts.

Beetle larvae may be storage pests and raid organic material horded by squirrels, pack-rats, and humans. This includes starchy products as well as fur coats and insect collections. But as far as I know, no beetle species, larvae or adults, directly parasitises any living warm-blooded animal. 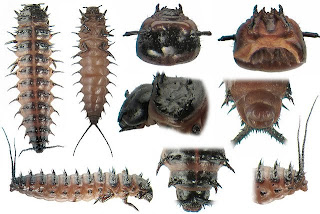 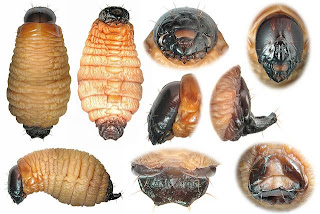 Examples of Erotylidae larvae (left) and Curculionidae (right) by A. Zaitsev

In adaptation to the demands of so many different environments and ways of life, beetle larvae come in many very different shapes. Artem Zaitsev's exceptional work, shown on his flickr photostream, gives you an impression of the multitude of morphological adaptations.

To grow, beetle larvae have to molt out of their rigid chitinous skin to a 'larger size'. This happens several times until finally the larvae changes into the stiff, immobile pupa from which eventually the adult beetle emerges.
Delicate shifts in the balance of three hormones determine whether a molt leads from one larval stage to just another, larger one, or to pupation and thus metamorphosis.
In short, Prothoracicotropic Hormone (PTTH) is released from the brain and activates the prothoracic glands to release Ecdysone. Two endocrine glands (corpora allata) in the head of the larva are producing Juvenile Hormone (JH). An increase in Ecdysone while the JH levels in the heamolymph of the larva are high will cause molting into another, larger larva. An increase in Ecdysone when the levels of JH are low will cause the larva to molt and undergo pupation and metamorphosis instead. PTTH release and corpora allata activty (JH production) are controlled by the central nervous system that is able to integrate endogen and exogen inputs (body size, age, food availability, day length etc.) 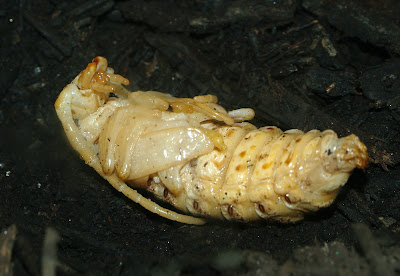 The beetle pupa is not as tightly enclosed as a Butterfly chrysalis. Appendices like legs, antennae or wings are already clearly recognizable. But the pupa is covered by a dense chitinous layer that protects against dehydration. While the pupa rests without moving or feeding, radical changes take place inside, the metamorphosis. Tissues are actually dissolved to be reshaped into completely different organs. Compound eyes, chemically sensitive antennae, wings and sexual organs develop while the feeding apparatus is reduced. At the end of the pupal rest the sexually mature adult beetle will hatch (eclose) from the pupal skin. 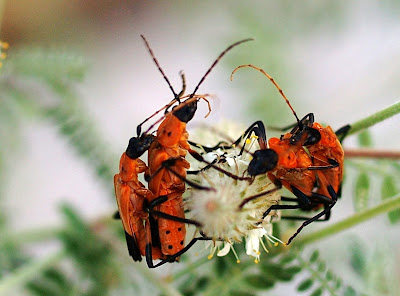 The adult beetles do not grow. Many species don't eat at all or just replenish their resources with easily digested sugars. Their only purpose is now the propagation of the species. Most are able to fly and are thus highly mobile. This allows them to disperse and find unrelated mating partners for a healthy exchange of gens and possibly fresh unexploited living-space for their off-spring. Since most adults either don't eat, or have a different diet from the larvae, there is no competition for resources among the generations. 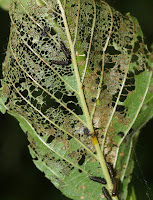 Adults and larvae of Altica ambiens completely defoliate small alders
The advantage of this arrangement is easy to understand after observing one of the exemptions: Alder Flea Beetle (Altica ambiens) larvae and adults both eat the leaves of Alders and often totally denude the little trees. I'm not quite sure how the next generation survives. Maybe there is some built-in prolonged pause in the sequence of generations that allows the trees to recover.

But back to our 'Young Beetle':
On a Mount Lemmon trip of the Sabino Canyon Naturalists led by Ned Harris, we actually found what could really be called a 'young beetle'. It was Mid-August an it had been raining. Even the mountain climate was humid and warm enough to be called muggy. The area along the Oracle Ridge trail was heavily burnt several years ago. The dead trees are still upright and soot and carbonized parts have been eroded away. These are ideal conditions for many different fungi and the mushroom connoisseur among beetles, Gibbifer californicus, the Pleasing Fungus Beetle. 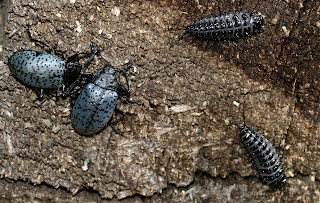 First we found some adults and last instar larvae, and then a whole gallery of hanging pupae. About 60 of them were lined up under the protective overhang of a leaning tree. Some where already empty. 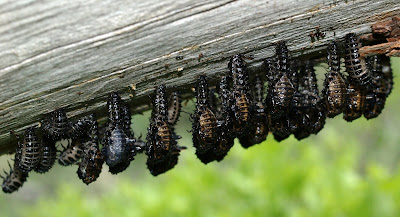 Perched on top of pupae and empty cases was a ghostly white beetle with his under-wings partly unfolded. 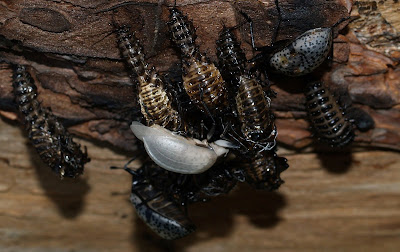 This very freshly eclosed Fungus beetle showed nothing yet of the characteristic blue coloration or any of the black accents. This was a teneral specimen, a true young beetle. His final colors became apparent only hours later when his new exoskeleton had completely dried. 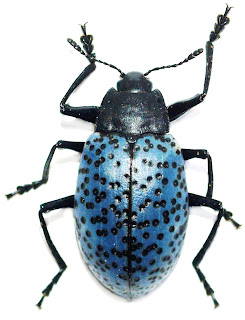 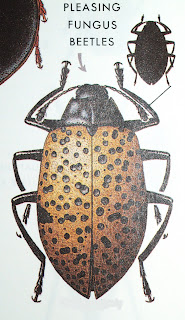 The mature color of Gibbifer californicus ranges from gray to deep blue (left) and purple. However, the beautiful color does not survive the death of the beetle. Gibbifer californicus specimen in collections are of a sickly yellow hue, only the black extremities remain dark.
Incidentally, the illustration in the Peterson Field guide (right) depicts a beetle with those non-colors to represent the species. That image was one of the triggers that started my collection of life-images of Arizona beetle species.