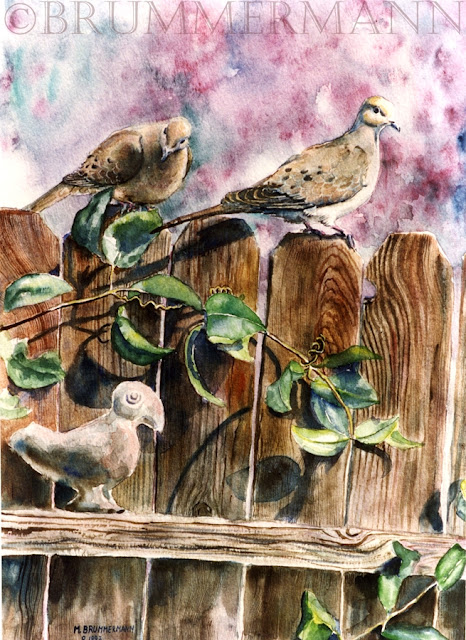 Mourning Doves are so adaptable. They breed on top of sun exposed cacti in the pristine desert, but I also had a pair in the tiny patio area of my very first Tucson apartment. They raised their 2 chicks in a flower pot and afterwards started right over - up to 5 times a year. I called the painting originally ' Keeping an eye on the alien'. At the time my I was on a J -Visa and and frequent questioning by border patrol agents was still upsetting to me. But when I entered the painting in a show, it was rejected. Later it won an award in a different setting. Go figure. I had changed the title, but that may not have been the reason.
As an afterthought: Today, but not in the early nineties when I painted this, our local doves, Mourning and White-winged, really have to compete with alien invaders. The Eurasian Collared Doves are pushing them out of several prime nesting sites in our backyard as we speak.
Posted by Margarethe Brummermann at 9:50 AM