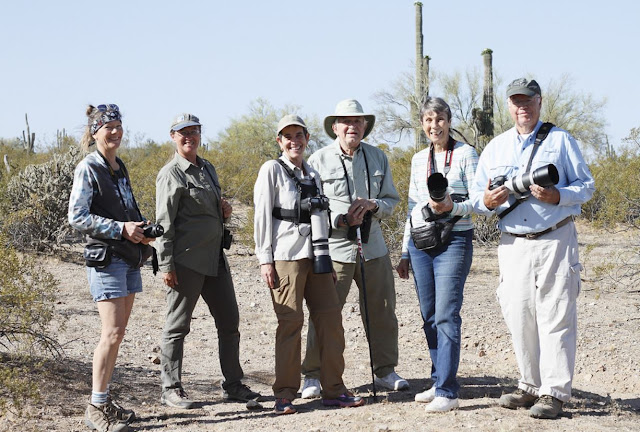 Because of a chain of sad events in our close family plus some serious wind damage to our house, I had no real drive to write blog posts lately. But life goes on and most of it is good. Like a visit of my photographer friends from the Gallery Gang plus artist friend Mary Lee who all came to see our famous 'Dark Female'. They all stopped by on May 6 early in the morning. A spectacular Red Tail Hawk has been raising her brood not far from our house for nearly 10 years now. 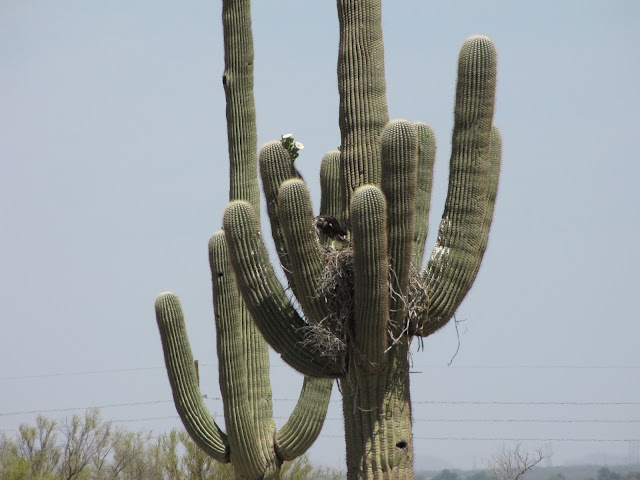 I checked the previous day - the chicks had grown quite a bit but were still sitting quietly high on top of the nest. Mom was vigilantly screaming from her favorite saguaro perch nearby. 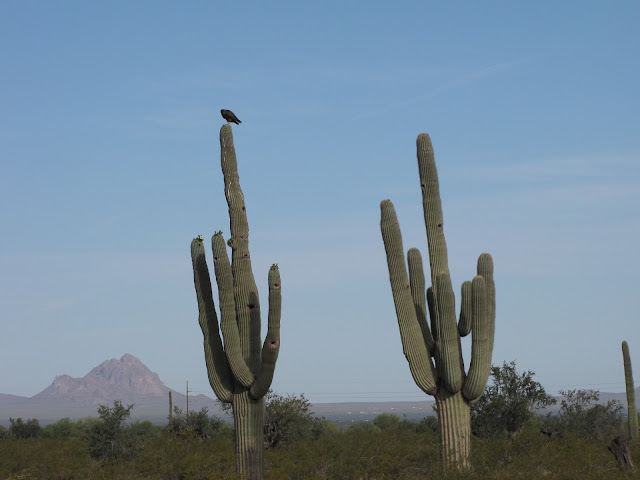 But when the 'Gang' walked out early on Friday morning, the hawk chose an aerial display instead. My friends had exactly the right cameras for the occasion and the sound of so may rapid-fire motor drives sounded a little ominous. 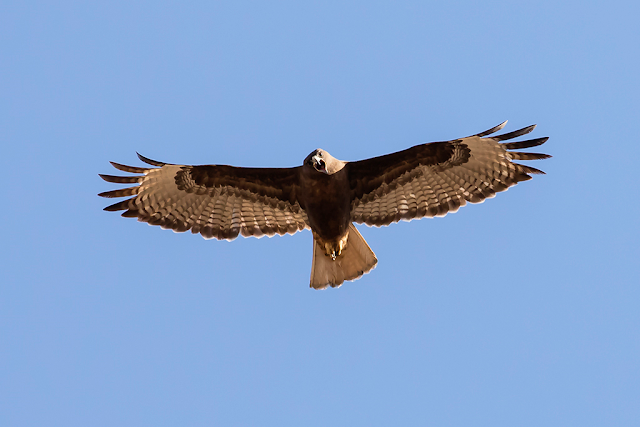 From my friends' photos, I gained a completely new very personal view of  'our Dark Female' whom I've now watched for nearly 10 years.  Ned, who specializes in Raptor photography and has contributed his work to several books on that topic called her the most magnificent dark morph RT hawk that he has seen. 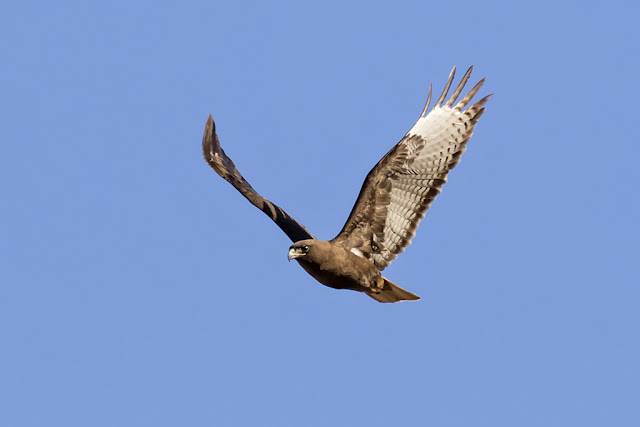 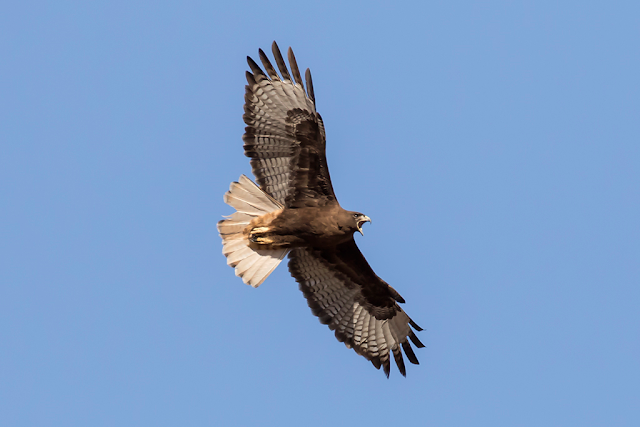 Her beauty was slightly marred by a broken tail feather. Incubation and rearing two fast growing chicks takes a lot out of a bird. 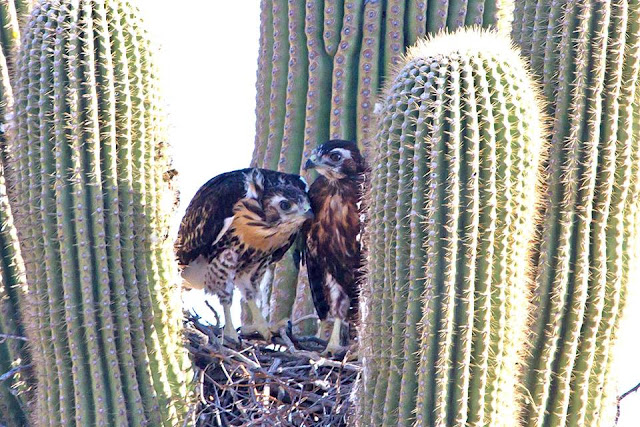 The kids are very close to fledgling now. We believe that this time, one of them has inherited mom's rare coloration. The one on the right is definitely much darker than its sibling. The left one shows already a pattern similar to that of the male (who never showed up during our visit). 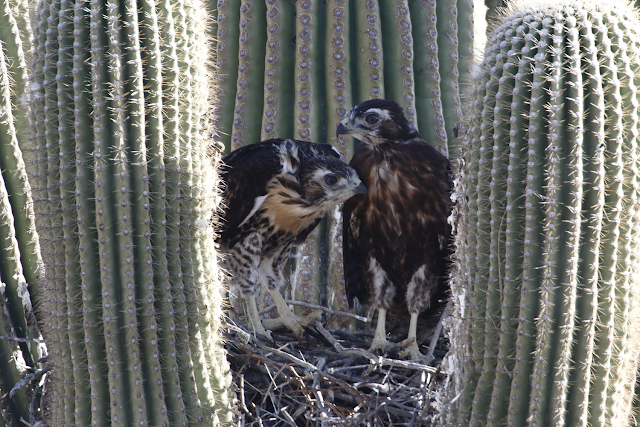 Kestrels, Night Hawks and Desert Iguanas had also been high on everyone's wish list, but they all did not show themselves to my friends. Of course a day before our photo excursion and the very next morning when it was just me and the dogs, all of them posed very nicely. 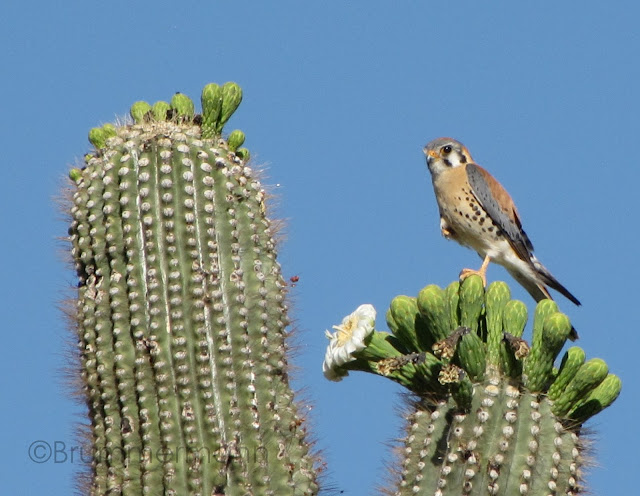 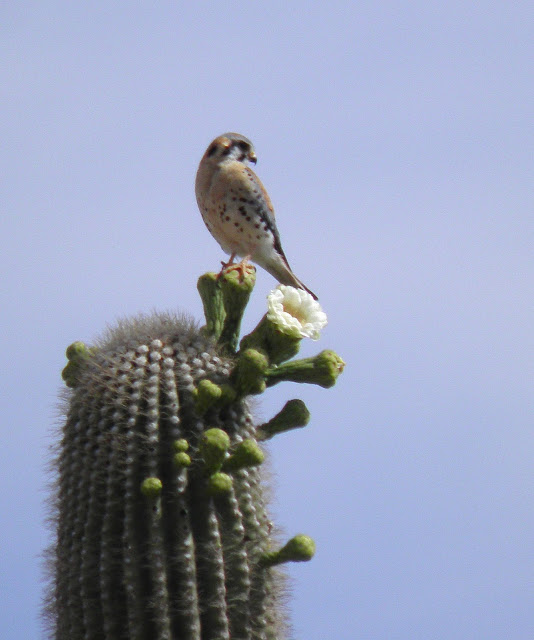 The resident Kestrel pair has fledglings to guard, too. Their sississississi calls betray their location, but the young ones are already acrobatic flyers and can avoid most danger (as long as they stay away from the Chainfruit Chollas 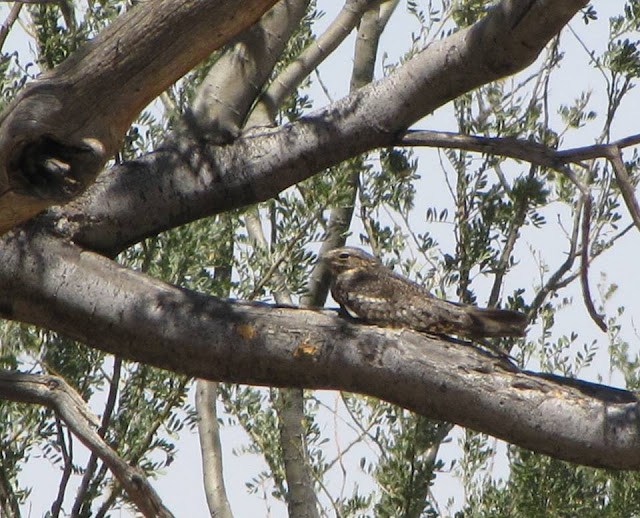 Lesser Night Hawks are very active at dusk and dawn. Their purring sound can be heard from our patio and mated pairs glide close to the ground and loop through the ironwoods along the washes 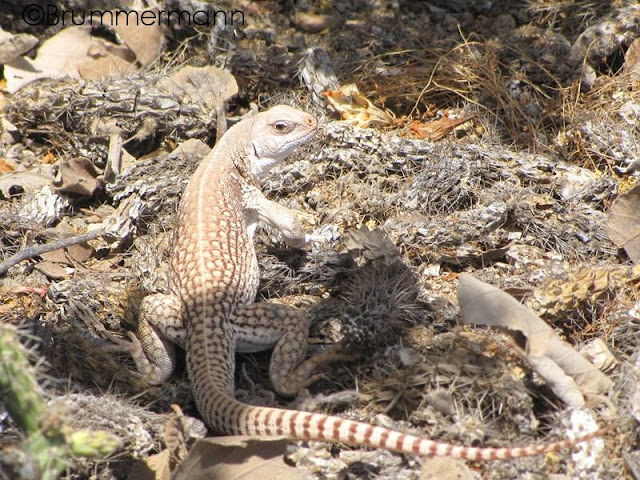 This big Desert Iguana was around a day before and right after the visit of the photographers. They would have loved him! (Her?) 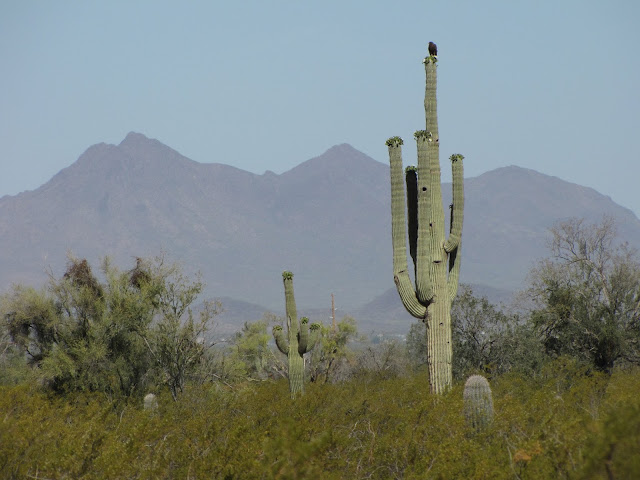 5 days after our group visit, the Dark Female had shifted the center of her attention about two thirds of a mile westwards. When Randy and I inspected the empty nest she still dutifully came over to screech, but soon flew back to where the chicks were probably resting from one of their first flights. 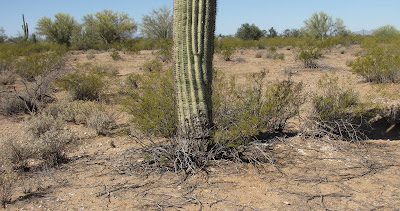 Around the nesting saguaro, big swatches of white wash on the ground still told the story of the fledged former occupants. In other years, I have seen RT hawk chicks come back to the nest to spend the night for a couple of weeks. The parents will still be around their keening offspring for a couple of months. It's a very stressful, hot and dry time in the desert. It will be a hard test for the survival skills of the young hawks. Some birds migrate to cooler mountains for the summer, but I have seen our Dark Female around at any time of the year. And next year hopefully at the nest again!

For the photos of the Hawk in flight and the close-ups of the chicks I thank Doris, Lois, Tom, and Ned!