The Gallery Gang on Mount Lemmon

Our group may yet grow back to its old strength in numbers! And haven't we all grown in skills, knowledge, camera size, social media connectedness .. to mention only a few growth aspects.
Bill George (second from right) summed up some history that I had forgotten:  The Gallery Gang,  goes back a few years (just about a decade or so) to when our local newspaper, the Arizona Daily Star, had a Reader's Gallery where we could send in photos hoping to have them published in the newspaper. The Gallery Gang were all those selected by the newspaper as "Gallery All Stars"
Each of us had  a full page spread of our photos along with an interview and a bio. We came together after that and did some photo shoots, but as things happen in life we drifted apart - to finally reunite now.
For myself I should add that this interactive Star Gallery was the first step towards social media, including BugGuide and my blog.


Friday the 20th of May was sunny, cool at first but warming up quickly. I think we might have caught the very end of spring migration - I definitely saw some warblers that I could not identify, and Doris photographed a Rose-breasted Grosbeak that we others all missed and that was way west of its range. 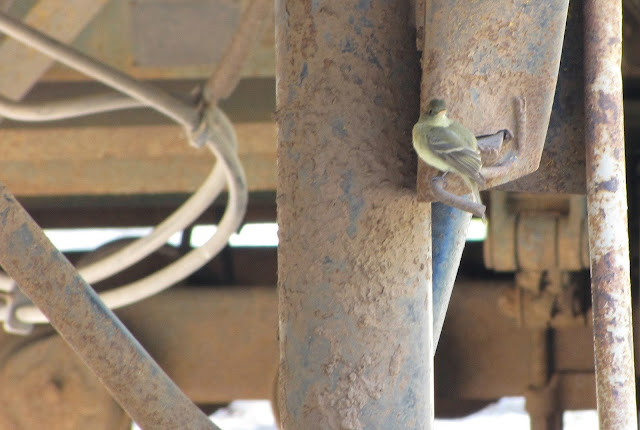 Most birds, though, seemed to be on their home turf by now and busy building nests.  We had been tipped off that there would be a Buff-breasted Flycatcher at Rose Canyon, but we found instead a Cordilleran Flycatcher moving into one of the one ugly, out-of place structure, a huge container trailer that for some obscure reason was parked down there. Actually, Robert Bateman would probably see a beautiful painting in the contrast between the dainty, fluffy bird and the texture of the rusty convoluted entrails of the trailer. 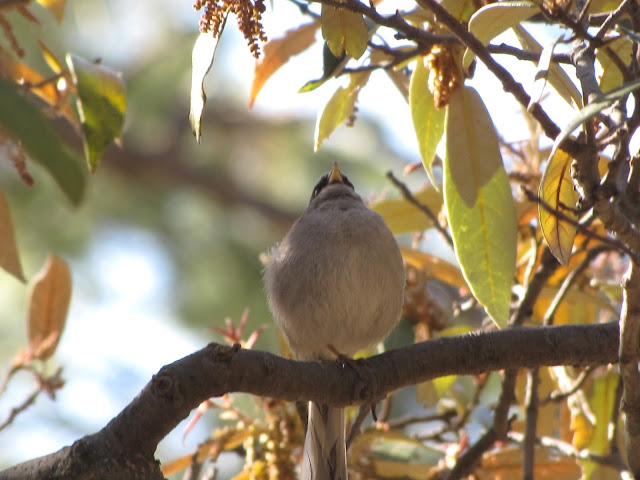 Bird photography isn't quite my thing either, and I'm blaming my tools (of course). And the branches, and the dappled light ... and this pose: who can tell that this absolutely devoted singer is a Yellow-eyed Junco? But just click on the link!

Incinerator ridge (views of old mining sites from higher up may explain the name) yielded some elusive warblers, a number of Spotted Towhees and several pairs of Western Tanagers. Doris told me a trick to remember the name: the males sport the colors of a western sunset. Our target birds showed up, too, but later better and more.

At Summerhaven, a feeding station could have provided easy access to a number of critters - I saw our only Abert's squirrel (or tassel-eared squirrel) (Sciurus aberti) there, but not knowing  that we headed soon for the more natural setting of Marshall Gulch. The squirrel really  lacked any tassels. But I was told that they have to be mature to show obvious hair tufts on their ears (?).

At Marshall Gulch we headed straight for creek and willows. Actually splashed through the shallow water to get the sun behind us. The scene immediately came alive with chipmunks and birds that were feeding on soft willow leaves, catkins and the bugs that were themselves gnashing on nectar and honeydew. Soon we got great views of the beautiful  Red-faced Warbler that, more than anything,  had drawn us up the mountain. Getting good pictures in that dappled light was quite a different story. 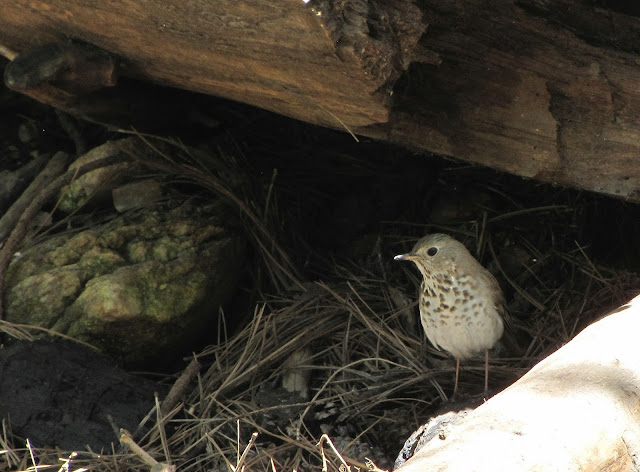 The mournful flute song of Hermit Thrushes rung through the Ponderosa Pines and House Wrens interrupted their constant hunt for insects to belt out their sharp little songs.

A pair of Painted Redstarts chose a nesting site that did NOT meet with the groups approval. So exposed! So close to the road! 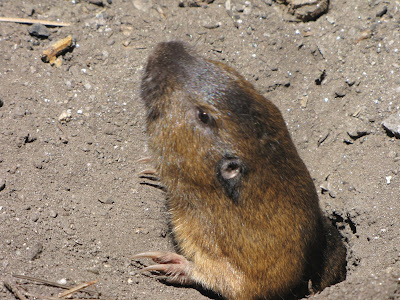 But the critters up here were in general not shy of humans. A Pocket Gopher peaked at us from his hole, then very decisively slammed it shut with some soil. But reemerged immediately closer to us. Disappeared again and popped up literally between my feet, where he became the center of attention and stayed. 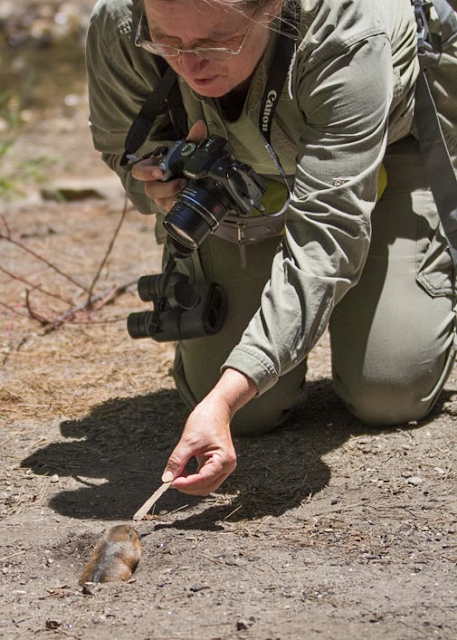 I held out a stick and he grabbed it, got it stuck across his burrow entrance, corrected quickly and pulled it in. Checked whether it fir the subterranean design, found it wanting and tossed it out of yet another hole. The area was a veritable Swiss cheese. The gopher became our star entertainer of the afternoon. 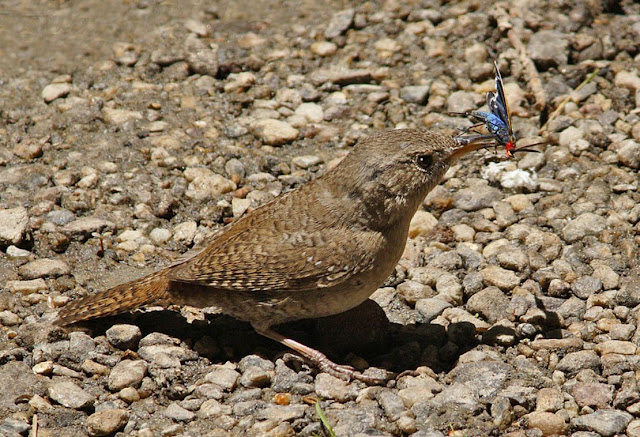 I was of course also looking for insects. Like on my recent Sonora trip, Veined Ctenucha Moths were flying in numbers. House Wrens demonstrated that that their vivid coloration does not necessarily scare predators from eating them.

Two-tailed Swallowtails sailed by and never landed, but Arizona Sisters posed beautifully on the tips of tree branches. They don't nectar on flowers, so that's where we usually see them

On blooming Dogwood (one of the small and multi-flowered  species) I found bees that must be specialized on this high altitude habitat that is more similar to a Canadian forest more than an Arizona desert.

Much more massive than even the bumble bee, a fly landed with an unmistakable drone: the biggest Bot Fly that I have ever seen.  Jeff Boettner, a friend and Bot Fly specialist, was quite excited about my find: 'This is Cuterebra atrox (male) and this species is known from over 200 males but only 7 females. Not sure why. The males are mostly singletons, so hard to know if these are leks or not? I think you have found this species before on rocks in fall. But there are museum specimens from AZ from June 10 thru Oct 7th- this would be the earliest. The other crazy thing about these guys is that the host mammal is still unknown. So I would love to get DNA from a sample of these.' OK, It'll go into the mail on Monday 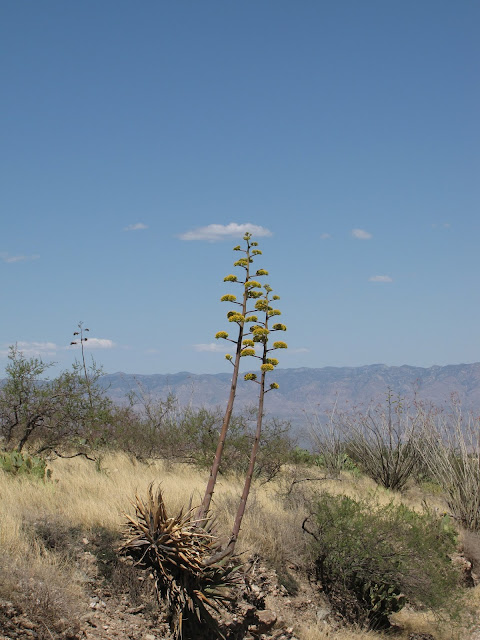 In the afternoon Collins Cochran and spouse and Doris Evans and I took the service road to Oracle down the back side of the mountain.One of the reasons to get my new Subaru Forester was that I wanted to be able to do that. Landscape-wise the trip was worth it - beautiful vistas. 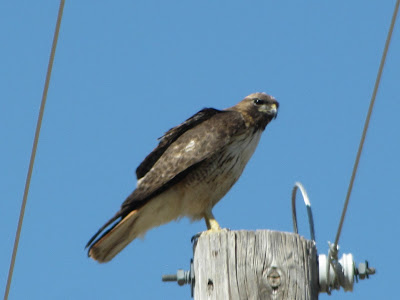 But it was so dry that we found few reasons to stop - no freshly green bushes to beat, no flowers to glean for insects - or maybe I was just to tired. Doris was revived by a Red Tail Hawk on the wires above, I stopped for a folk art piece or rather weird cultural statement and the towering flower stalks of yellow blooming agaves. 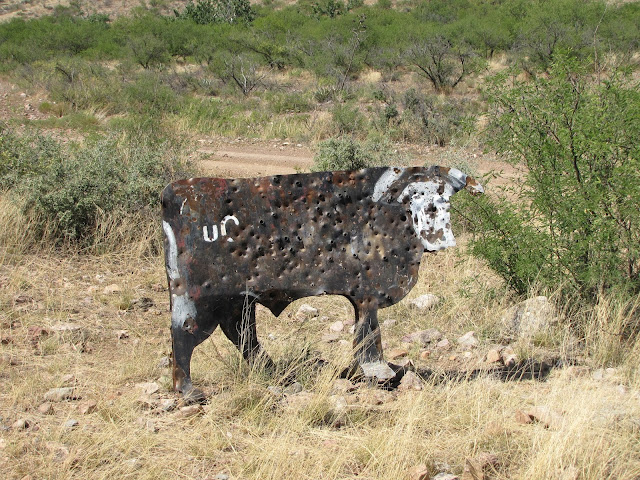