For Arizona, this April morning  (4/26/2016) was rather cool and very windy. At 72 degrees Fahrenheit and gusts up to 40 mi per hour, the only insects flying seemed to be big, strong Centris bees visiting our Foothills Palo Verdes (Parkinsonia microphylla). The big bees were actually flying in wind so strong that it ripped one of our swamp coolers off its foundation. 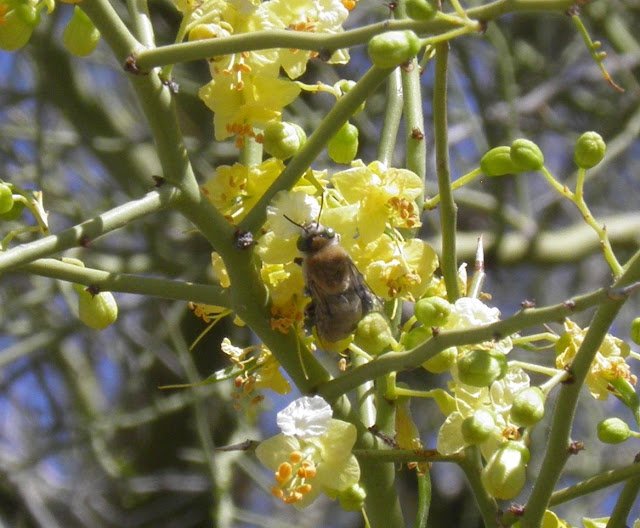 At around 8 am, and just about 70 degrees Fahrenheit, many Centris Bees were actively collecting among the bright yellow flowers that are just beyond their prime by now. But equally many were still asleep, clinging to twigs with their tarsi, but even more firmly with their strong mandibles. 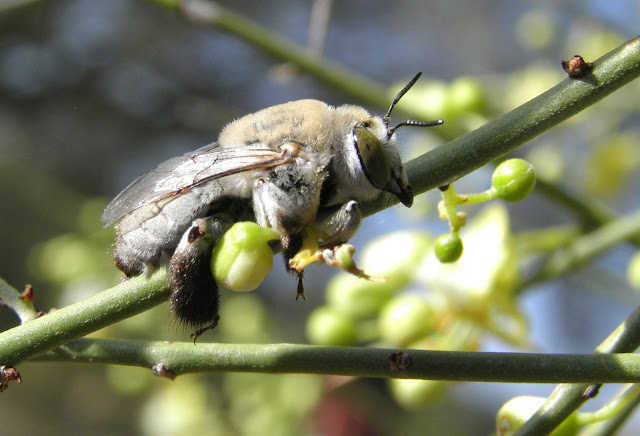 Most insects are ectotherm, meaning that their body temperature depends completely on environmental factors and fluctuates. They can only regulate it somewhat through their behavior. Birds and mammals produce and regulate their body temperature actively through endogenous mechanisms (shivering, panting, sweating, addipose tissue metabolism), which makes them endotherm (this is not to say that they do not use behavioral means of thermoregulation in addition). 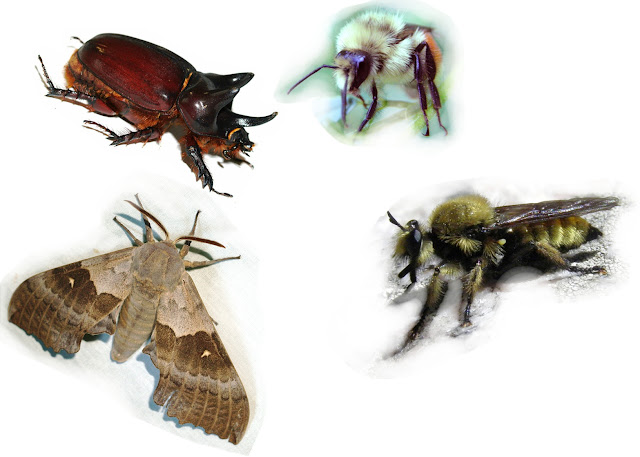 But there are exceptions among insects. Big hairy bees and big active sphingid moths, as well as some big beetles and Robber Flies (my own observation) are able to elevate their body temperature using muscle activity that does not translate into movement or at least locomotion, just like their avian and mammalian counterparts who shiver to get warm.

Birds and mammals maintain high body temperatures almost constantly. Times of  hibernation and nightly torpor phases in some few species are the exceptions.  In contrast,  facultatively endotherm insects are ectotherm most of the time. That saves a lot of energy. They actively increase their body temperature only when needed. Flight is a very demanding way of locomotion, and the flight musculature of most insects is only operational when warm enough. Maintaining this high temperature requires a great energy investment, especially in small organisms with a less than optimal body-mass-to-surface-area ratio. Note that all part-time endotherm insects are comparatively big and hairy, at least as insects go!

So even those big hairy bugs don't keep their temperature up constantly. B. Heinrich found that bumblebees only fly at cold environmental temperatures when their investment yields a  worthwhile return - meaning that they fly among nectar-rich flowers, but stop, rest and crawl if the available flowers are of minor quality. While the flying bumblebees maintained high body temperatures, body temperature of the crawling ones quickly fell to the level of the environmental temperature. And before they could fly again, they first had to warm up.

So on this cool morning, the palo verde flowers, a little past their prime, were a still worthwhile investment to most of our bees, but not to all of them. And those who were not flying and active were still really cold and unresponsive.

There were sleeping females as well as  males, debunking the myth that females always sleep in their nest burrows. They may do so, often, because they often spend the sunset time digging (own observation). So when it gets dark and cold they just stay in the burrows. But they also camp out among the flowers when that's where nightfall catches them.

The sleeping bees do not warm up quickly. While it is usually difficult to get a close look at those constantly hovering Centris Bees, this is an opportunity to study them.

Sexual dimorphism is in the details. While both sexes have big green eyes in this species, the area between the eyes is white in males. It looks like the reason is the much larger clypeus. This feature is shared with many bees,  and interestingly some male beetles also have more white in their faces.
The faces of the female bees are more fuzzy and grey.
Another difference: his eyes are bigger and more bulging. Male Centris bees are extremely eager suitors, to the point that they try to dig up their late-born sisters to mate with them. Much of that activity is pheromone driven. But often, the males also relentlessly pursue flying females. Those big bulging eyes - to better see her in three-dimensional space?

Only females build nests and collect provisions in form of pollen and flora oils, a specialty of Centris (and Epicharis), so only females show special adaptations for the transport of those substances. Their hind tibiae are covered with long, dark hairs densely covering the hind leg - the scopa. There are also long bristles arranged like a comb on the front legs. I often see Centris Bees hover and use their front legs in grooming motions - probably combing pollen and oils from all over the body and stuffing it into those hind-tibia brushes.  Maybe that comb of setae is also useful to dig in the loose sand?

The hairy tibia of Centris and Epicharis is considered the evolutionary precursor of the corbicula (pollen basket) of the apidae (orchid, honey, carpenter, bumblebees).

"The corbicula is a glabrous, concave baskets on the hind tibia of Apidae, and represents a key evolutionary innovation, allowing efficient transport of plant resins and large pollen/nectar loads and freeing the corbiculate clade from dependence on oil-offering flowers" (Martins AC et al., 2014) 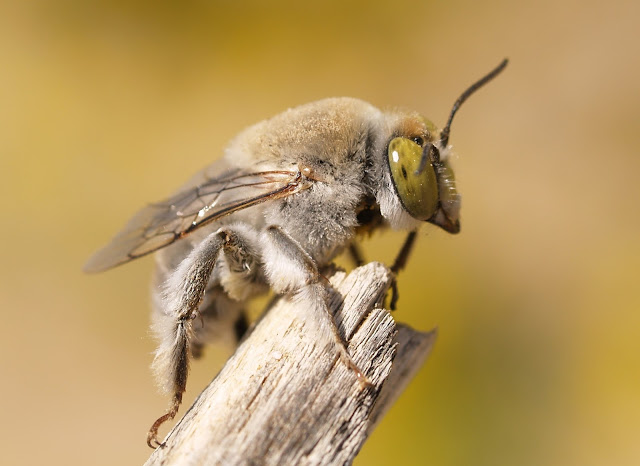 Here is another look at the male Centris pallida - he does not have those brushes of long hairs on the hind tibiae.

Lastly, he also has no ovipositor and that means no stinger. I have handled individuals of both sexes when they were still too cold to fly and none tried to sting me, but I'm too careful to find out whether that is the rule for Centris Bees. They are certainly not as aggressive as social bees and wasps but the females probably can sting.