The Night of the Desert Queen Peniocereus greggii 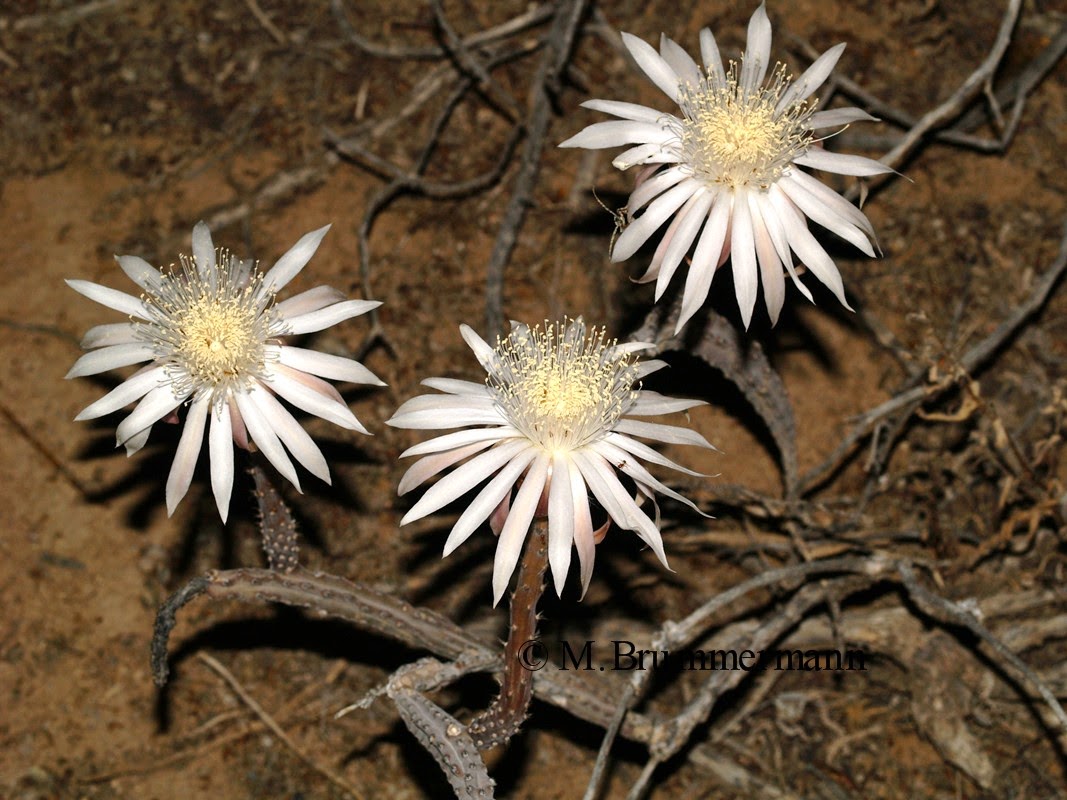 Last night the flowers on our backyard Queen of the Night (Peniocereus greggii) finally opened. The flowers were small but perfect. They seemed to glow in the light of the full moon and their sweet fragrance floated on the humid, warm air of this monsoon night. 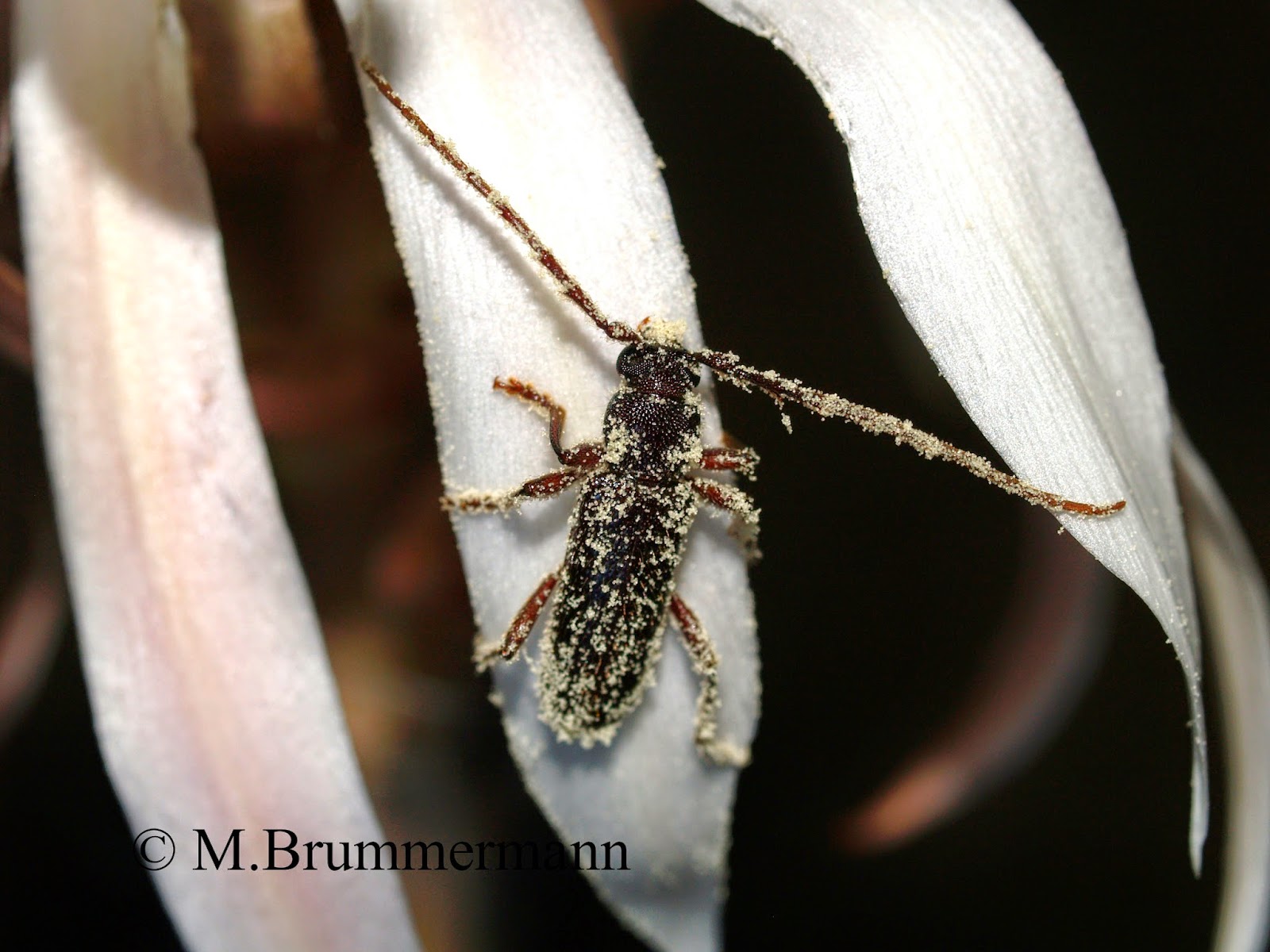 A single small moth was visiting. Even at my black light, this still is a moth-poor time. Last year I noticed that many queen flowers wilted away without producing fruit. The reason could have been a lack of pollinators. But last night I found a longhorn beetle obviously doused in pollen. I'm sure he came to the sweet smell and found the nectar and will also distribute the pollen. 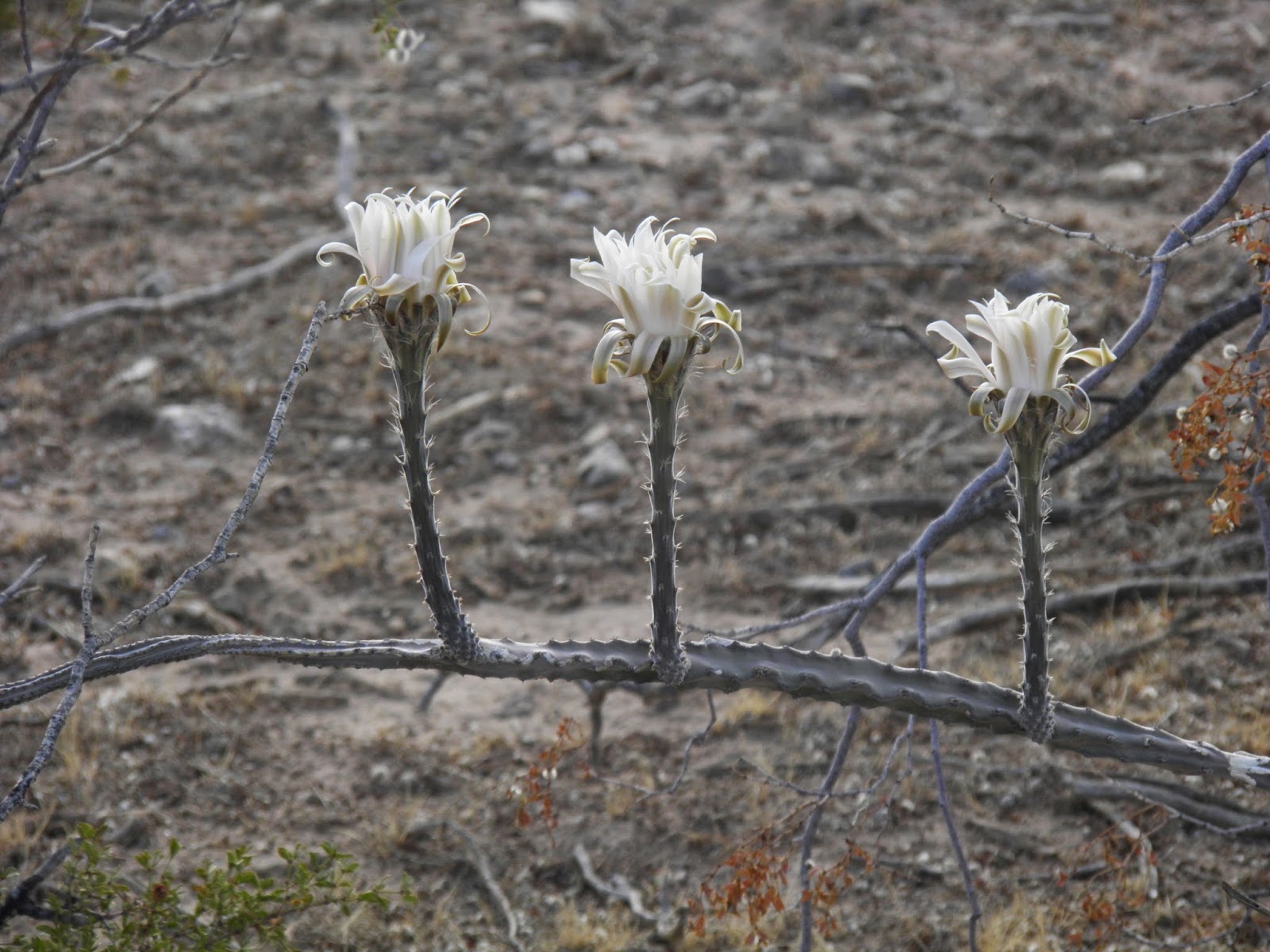 I went back in the very early morning hours to find more blooming plants. The first thing I noticed was that our backyard flowers had already closed up, usually a sign that they are pollinated. 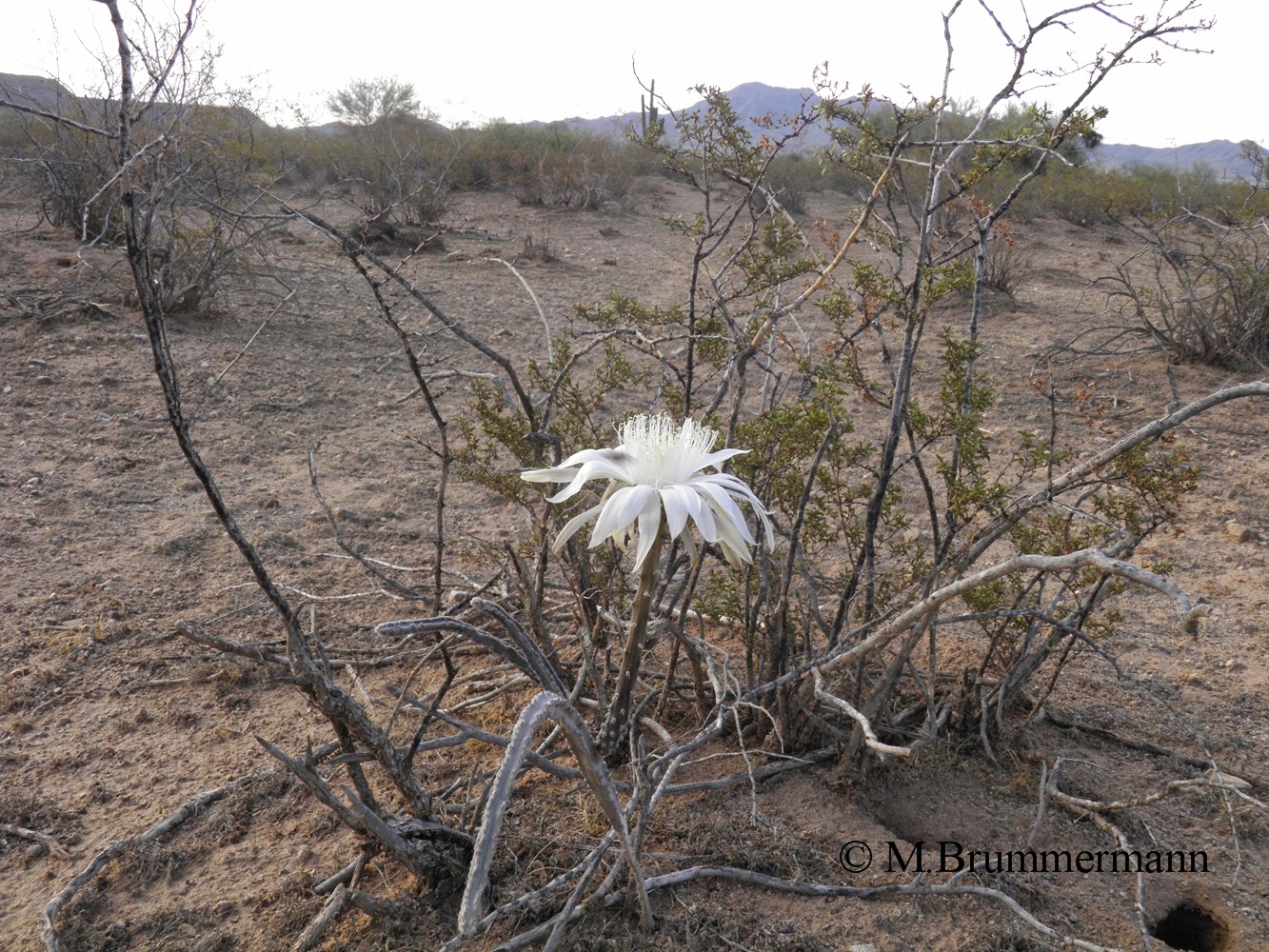 I walked across about half a square mile of state trust land. Many of the plants that were blooming last year were resting this season. The wild native Queen cacti whose branches are thin and not very succulent rely mainly on  big underground tubers for survival during droughts. After a year with many flowers and fruit, the above-ground stems often shrivel and dry up. New sprouts emerge from the ground but rarely bloom for the first two years. 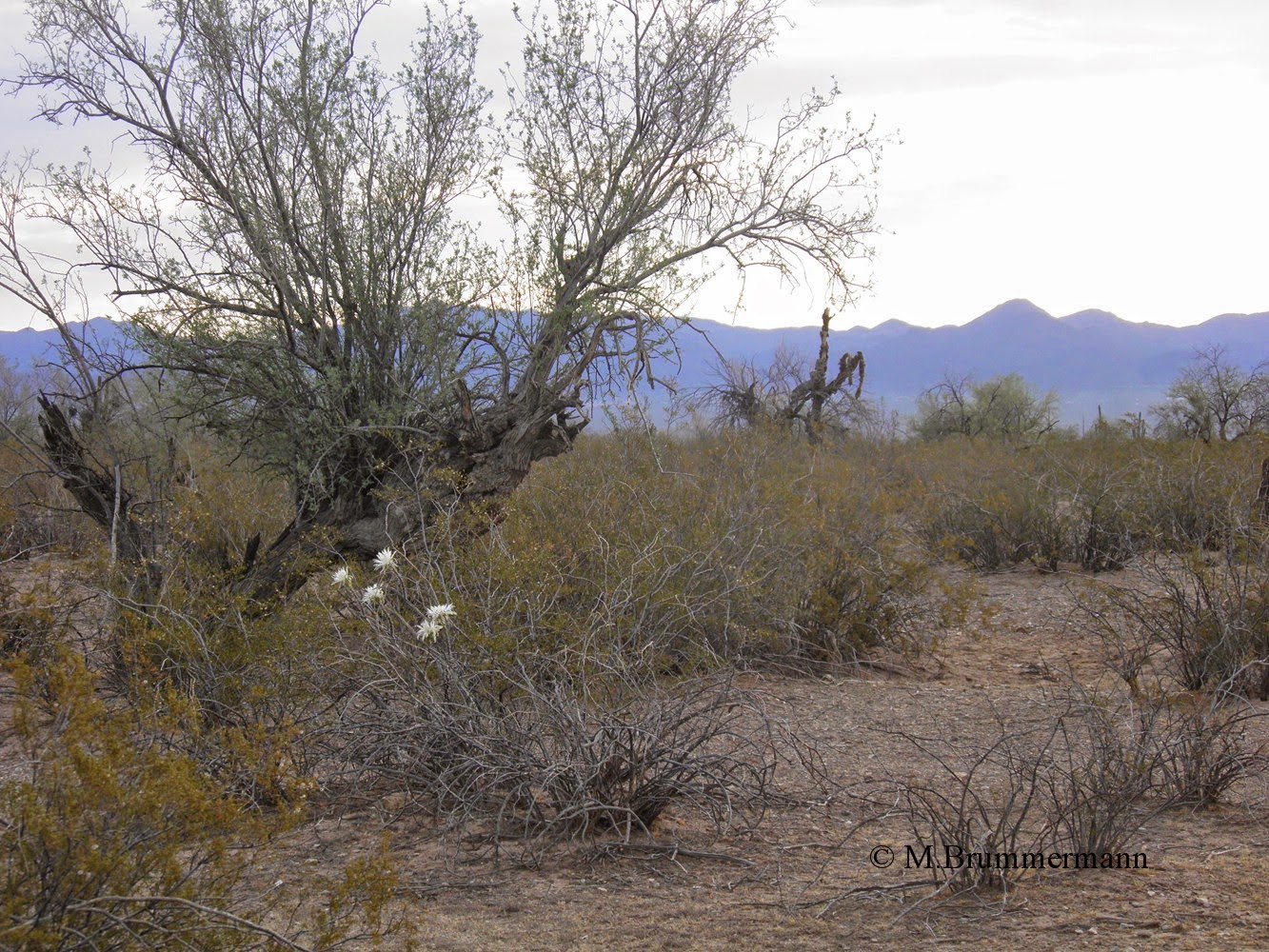 But I found about a dozen new plants that I had not known before. Many were small and had only a single flower, but some were as tall as I, with big, antler-shaped stems and up to a dozen flowers.
Of course the pollinators may be drawn to the flowers by the sweet fragrance, but I, being a visual creature, scan the area for the pale white spots that barely clear the branches of the creosote bushes. The color seems perfect to reflect the uv part of the lunar spectrum. So the big mobile sphinx moths can probably also do a long distance visual scan, even at night. 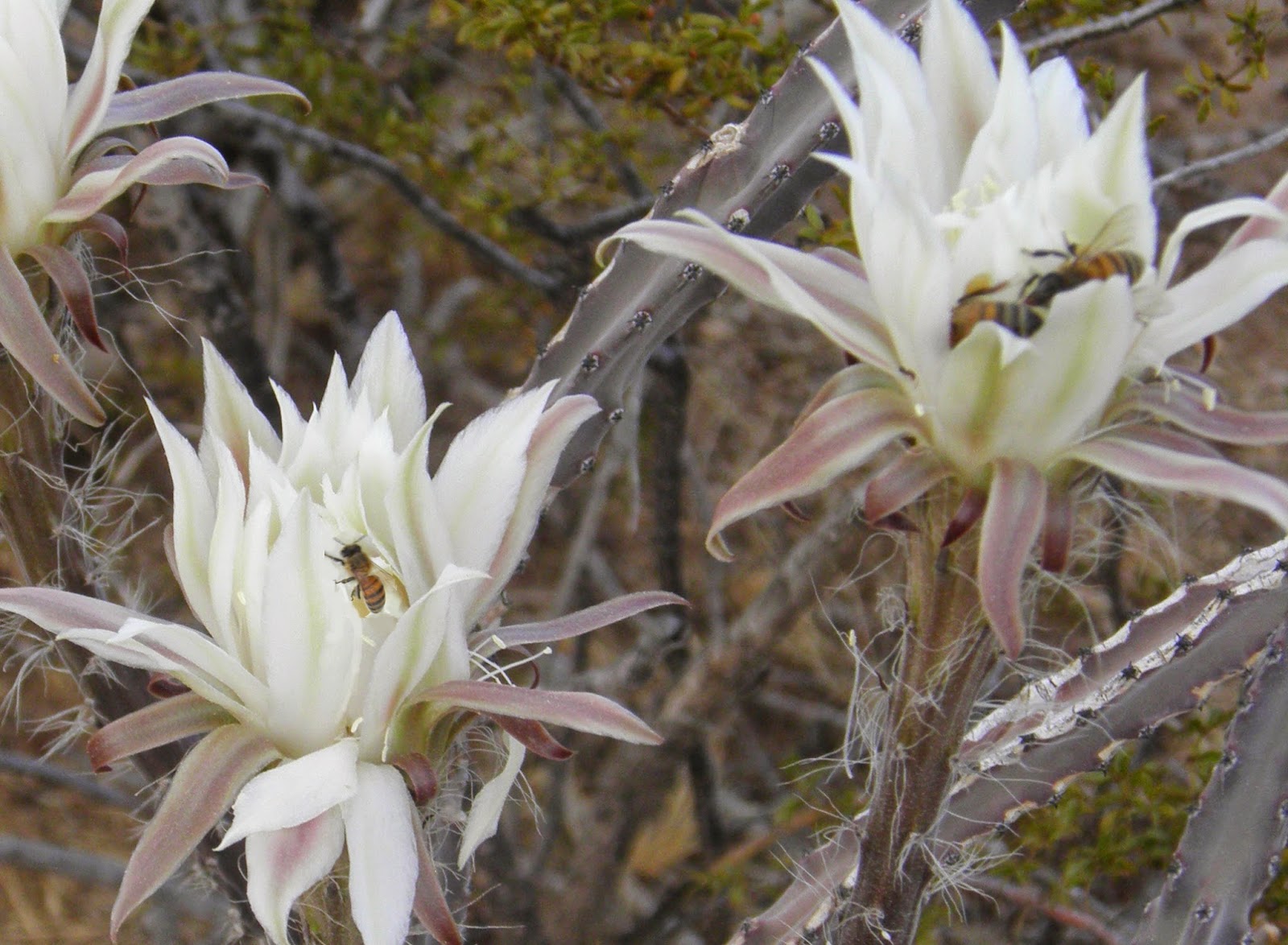 This morning however, I found even the wilting flowers inundated by honey bees that were obviously still getting their fill. Every plant was surrounded by dozens of honey bees. This is very different from last year, when I found little Agapostemon sweatbees but no Apis melifera at all.
I think I know the explanation: the winter of 2012/13 brought several nights of deep freeze. Well provisioned honey bee hives in Europe are able to keep the temperatures high enough during cold spells to allow the majority of bees to survive. Africanized honey bees usually sustain much greater losses. Small feral hives (many Africanized bees tend to split hive and swarm more frequently than Italian honey bees) are even less cold resistant. So while Africanized bees can usually survive Arizona winters as feral colonies, the winter of 2012/13 had pretty much wiped out the local population. But now, after the very warm winter of 2013/14, they are back in force.
The Queen of the Night is by timing and color the very opposite of a bee flower, but those feral honey bees have great scouts and are fast learners - I think they found all the wilting flowers today and carried off all the drags. 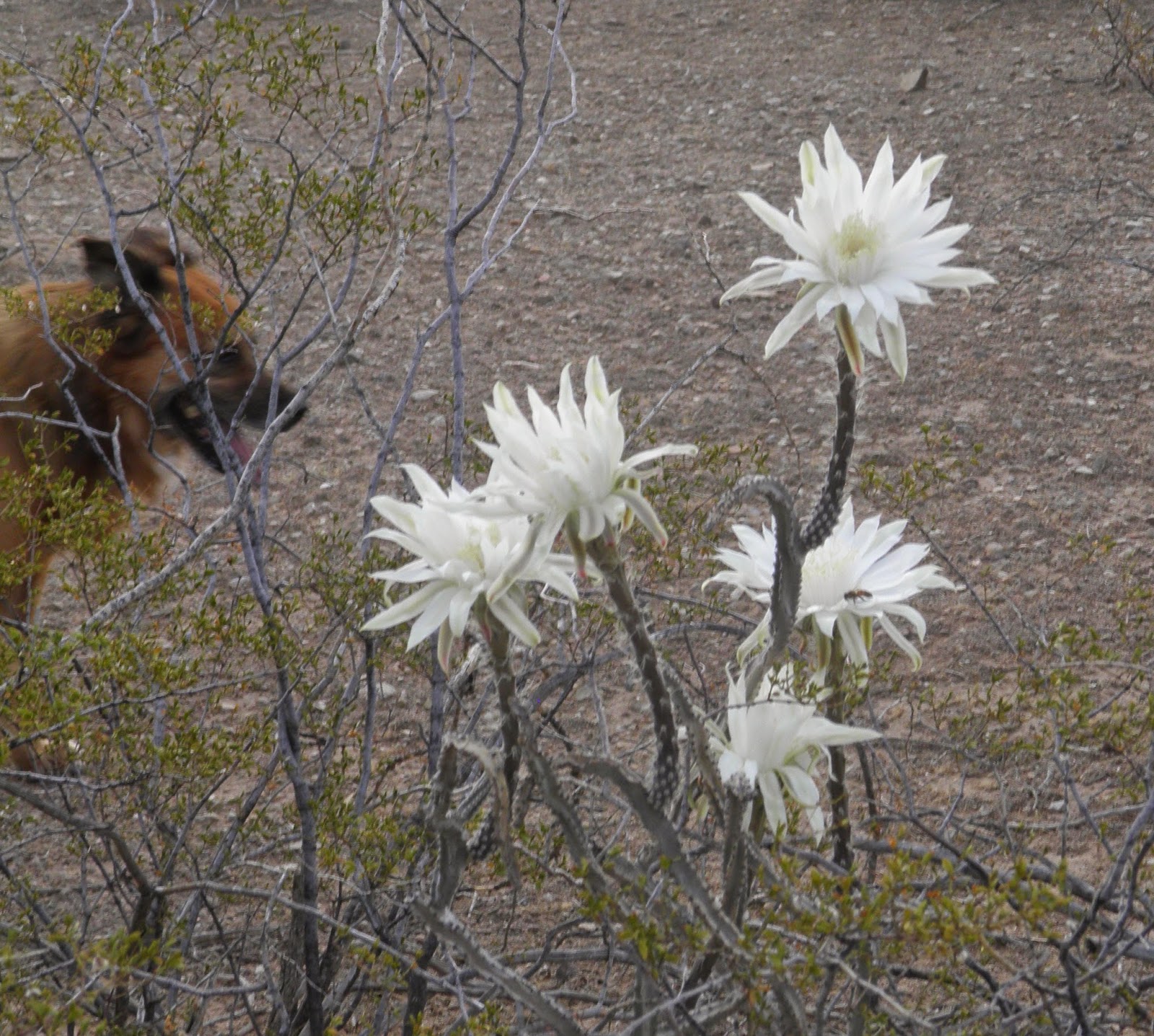 I did not ask any dogs to join me on my NBC quest, but after a while I noticed that Cody had quietly joined me. We walked all over together, until he finally got tired of my meandering from plant to plant. He might have felt too weak to go on and returned home as quietly as he had come out. This was our last walk together and the photo above is the last one I took of our most beloved dog. A week later, Cody died.
Posted by Margarethe Brummermann at 10:53 AM