Longhorned and Shorthorned Denizens of the Oracle Ridge Trail

The Oracle Ridge high in the Catalina Mts. (above 8000 feet) has been one of my favorite trails for years, even after it was hit hard by the devastating Aspen Fire in 2004. The slopes that were once covered in soft green Robinia neomexicana are still covered in the silvery skeletons of those trees, but thickets of young Gambel's Oaks are beginning to fill in the open spaces. 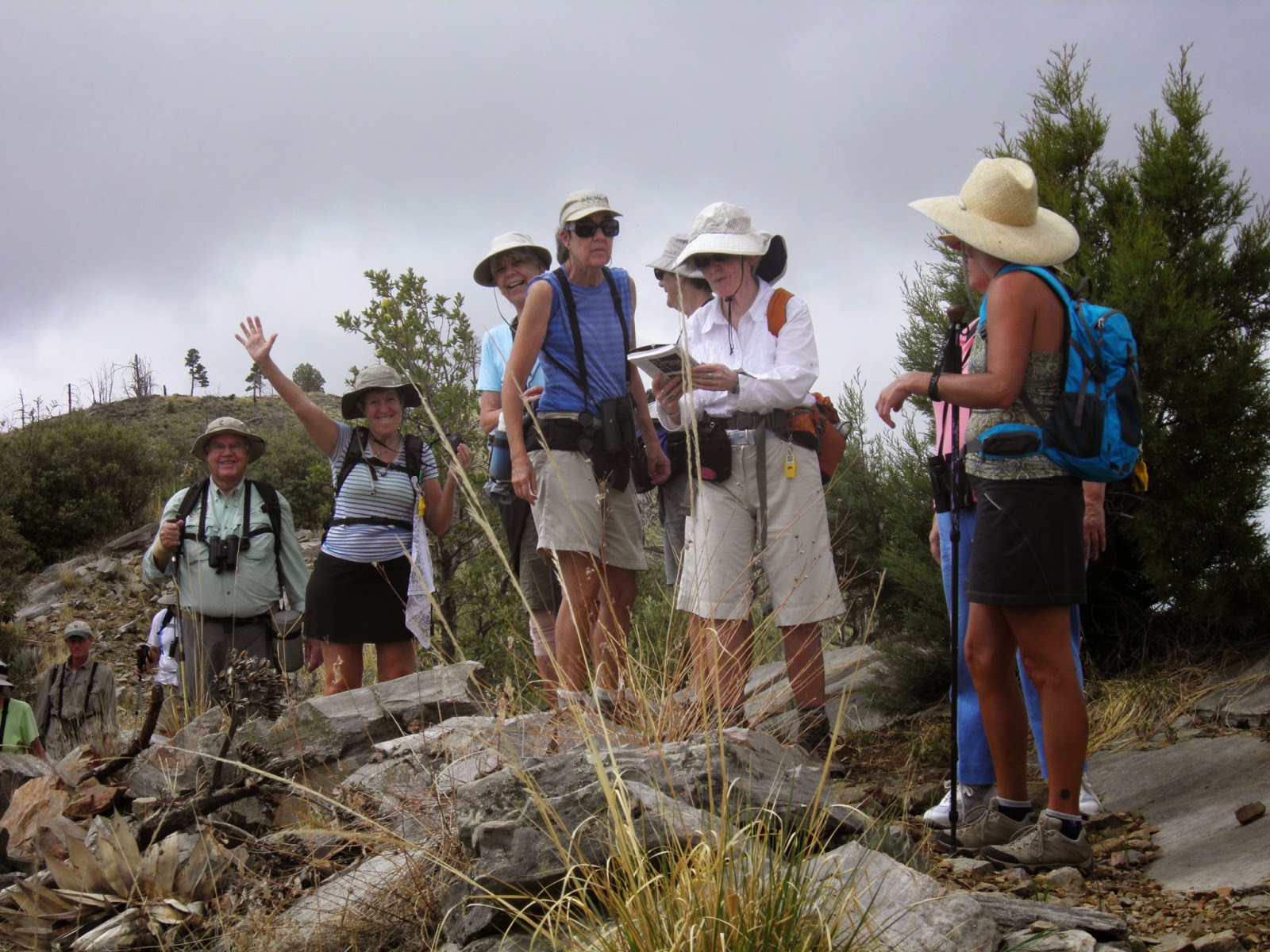 Today I was up there with 'Ned's Friends' a group of undiscouregable Sabino Canyon naturalists who last through the Arizona summer and even enjoy it. No, it's not a DRY heat anymore. Although the narrow trail is a challenge with a large group like that, we watched Spotted Towhees, Yellow-eyed Juncos, Western Bluebirds, Acorn Woodpeckers, Black-headed Grosbeaks, White-breasted Nuthatches, Blue-grey Gnatcatchers, Red-tailed Hawks, Turkey Vultures, and many other species of birds. But the day was overcast, so insects and reptiles were slow to wake up.

But when we found several sleeping male Longhorn Bees, we couldn't let them lie....so, startled, the little guy released his mandibular and tarsal grip and took off. People said they needed a dictionary to understand me. Must be my accent.

Parry's Agaves were in bloom along the crest of the mountain ridge and Mexican Cactus Flies Tarantula Hawks were nectaring. The male wasps also engaged in 'hill-topping' a behavior that is characteristic for their courtship.

I tried to catch one, unconcerned because the males have no stinger. But what I found was no wasp at all, but a beetle that mimicked the wasps not only in color and shape, but also by walking, wings raised up, in those short energetic bursts of speed that are typical for hunting spider wasps. A female in the longhorn beetle genus Tragidion. Ian Swift later identified it a Tragidion deceptum. 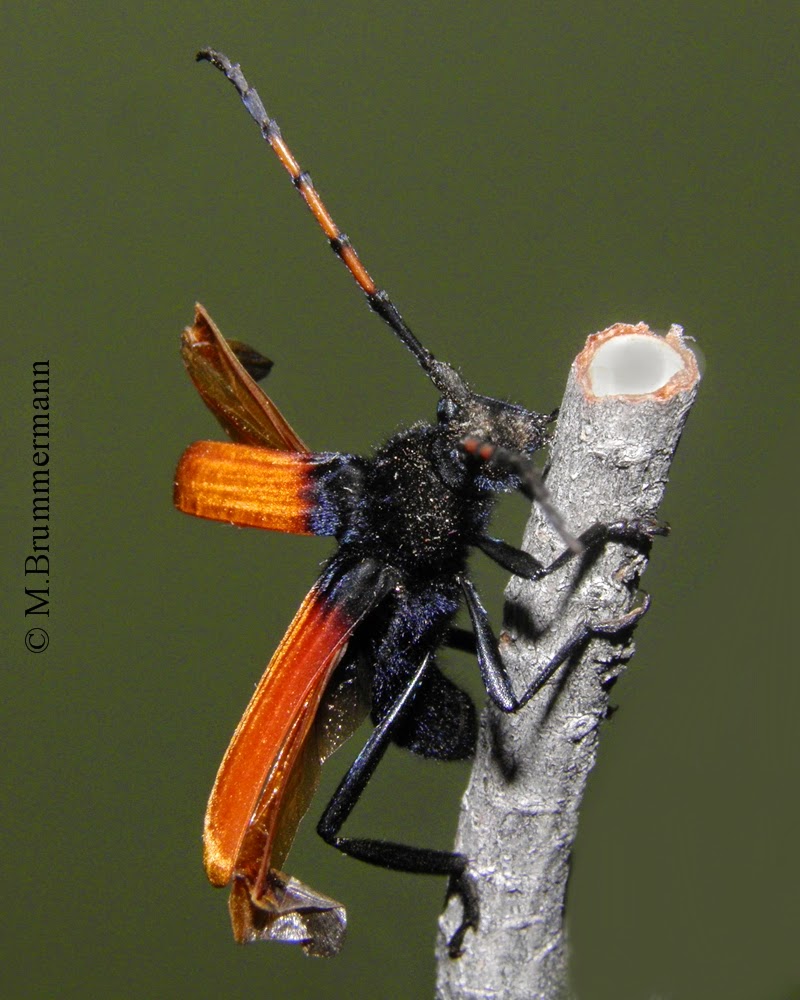 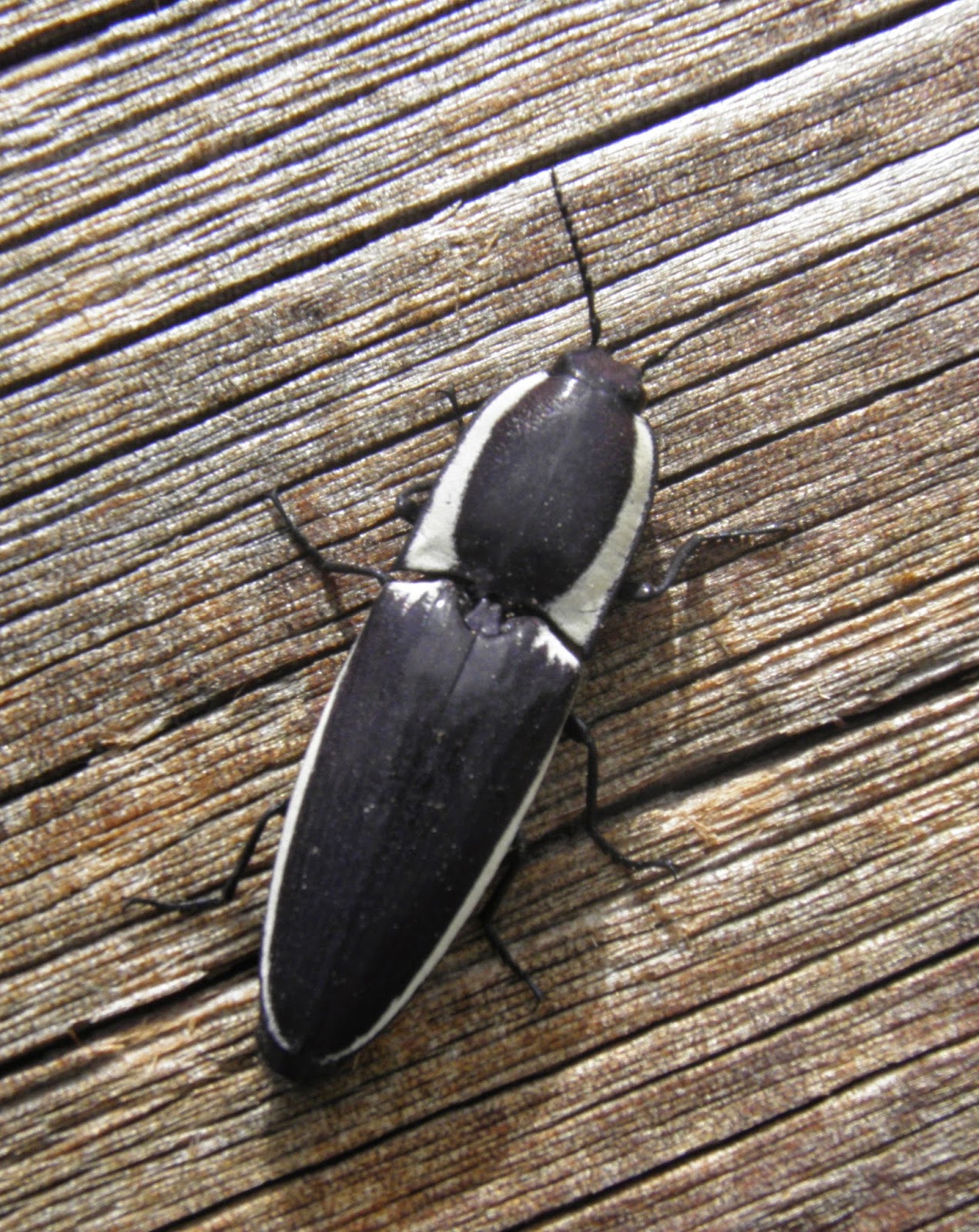 A huge click beetle Chalcolepidius apacheanus was sunning himself on a smooth log. Somebody called him a roach (??). He looked fresh and perfect as if just emerged from the pupa 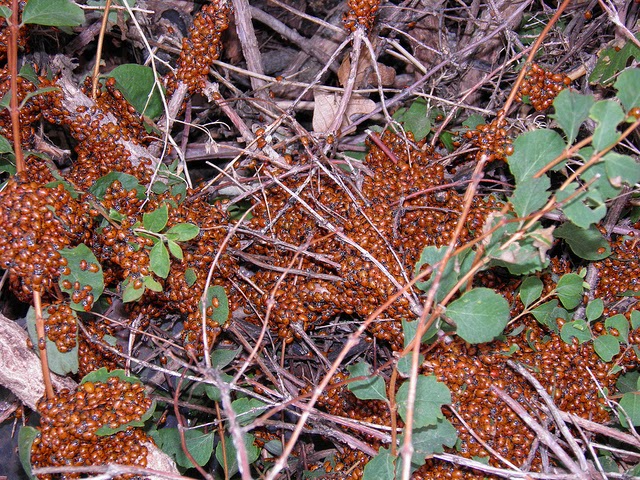 We also found hundreds of Convergent Ladybeetles that had moved from the heat of the low desert to the cool mountain tops. Do these individuals eventually go back down? Or do they live out their short lives up there? 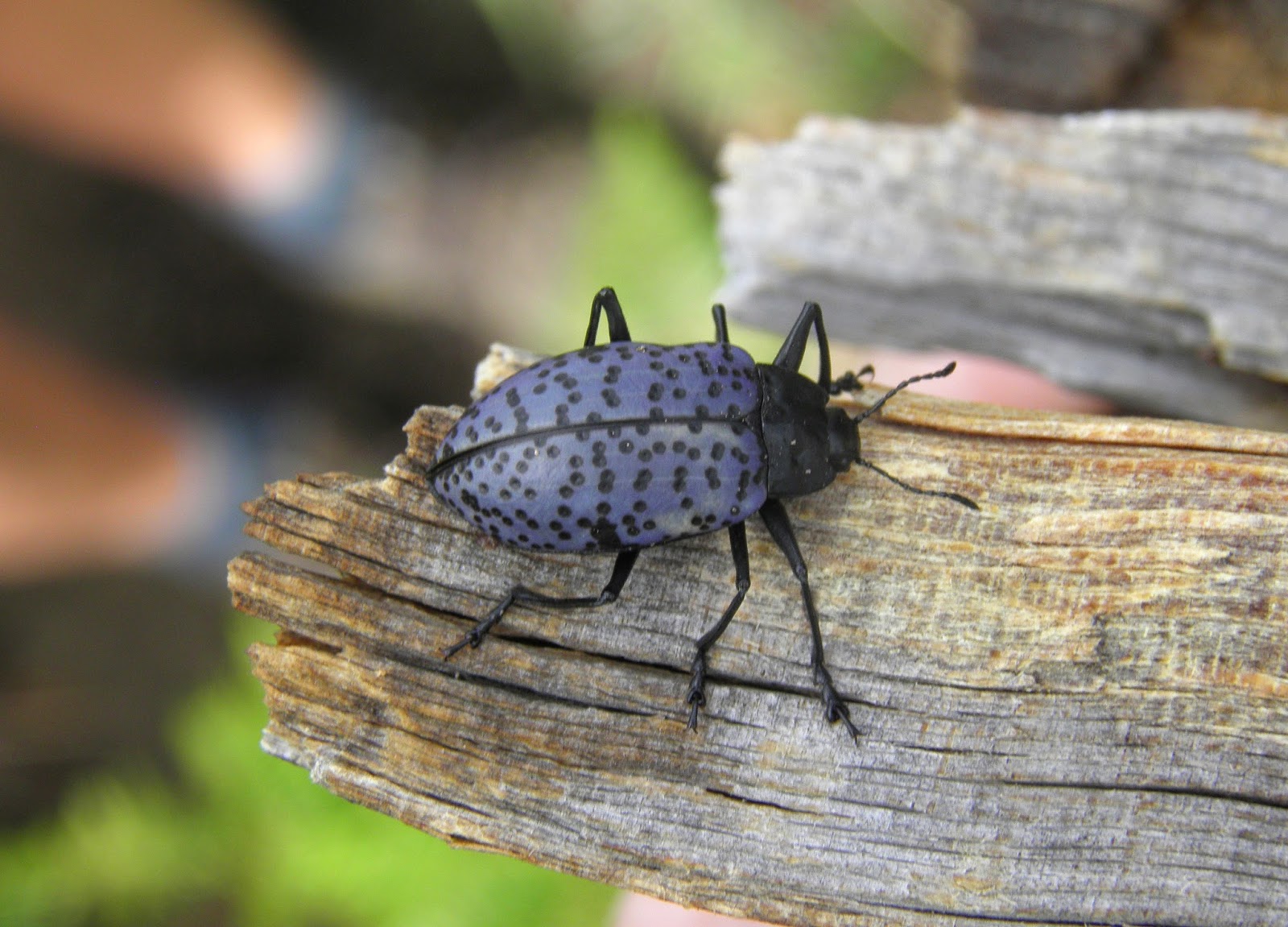 Blue Pleasing Fungus Beetles are year round residents of the mountain forests. Adults and larvae feed on fungi that develop on the burnt trees, but I noticed that their numbers had declined considerably since I was last on this trail in 2012.

10 years after the fire the nutrients in the dead trees are probably finally used up. So their were much fewer of the large woody shelf fungi than before. Instead we found soft little fruit bodies of brightly orange Nectria Cinnabarina on the dead upright trees and numerous earthstars in the decayed wood mulch on the ground. 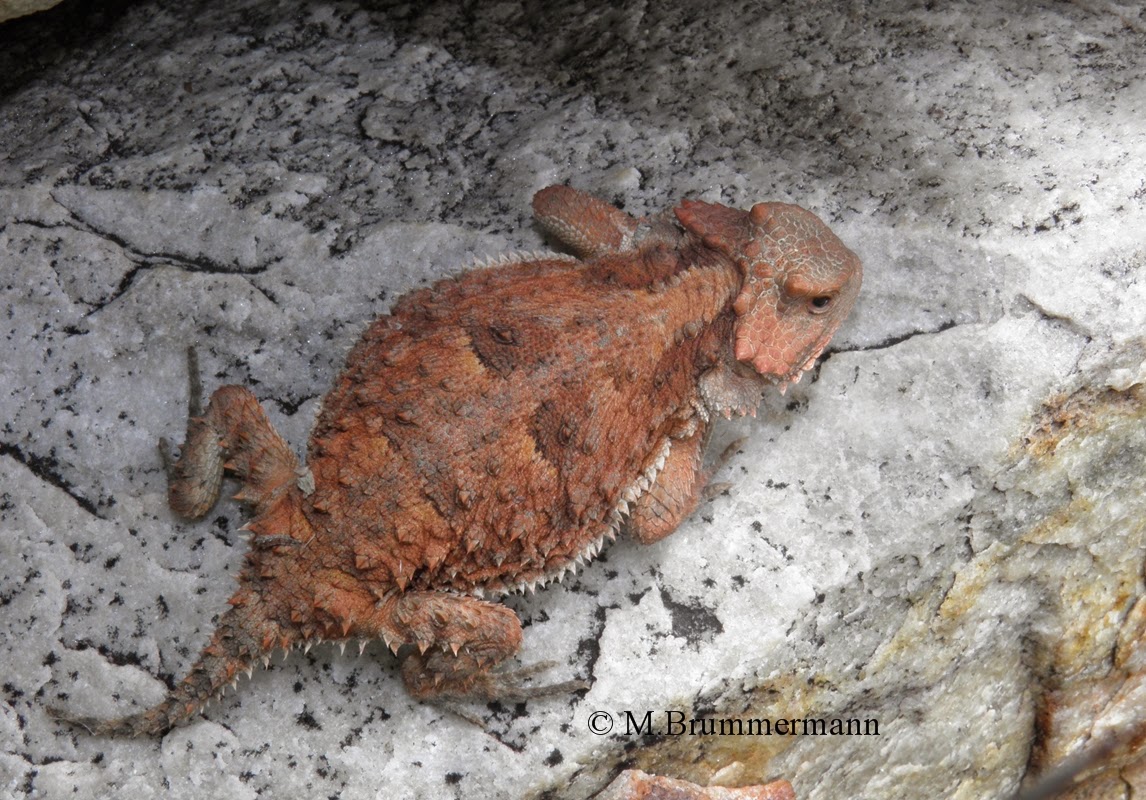 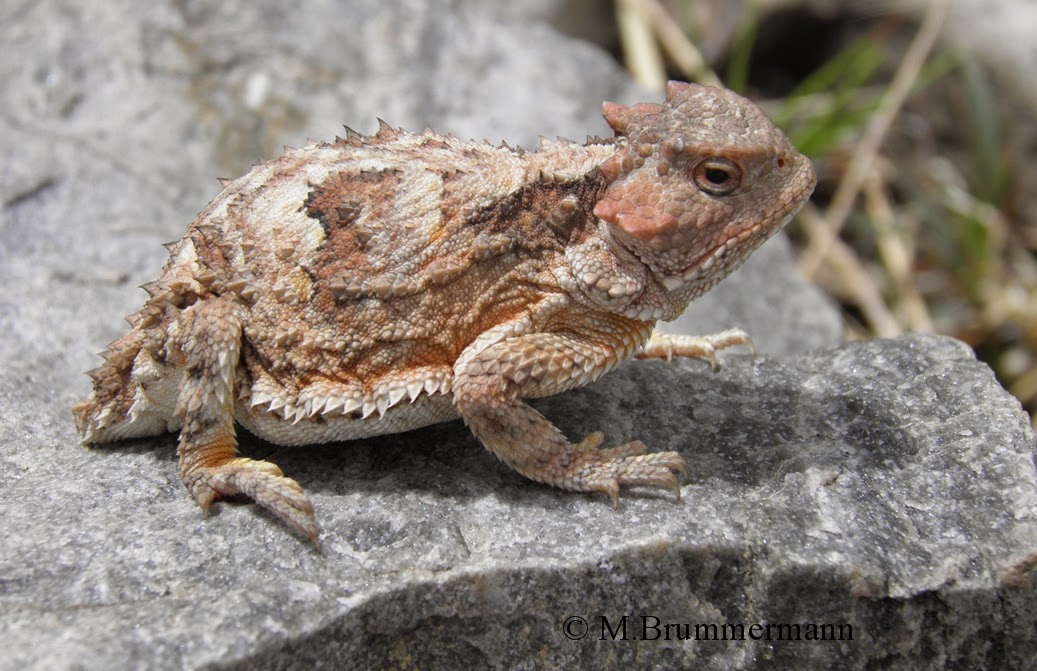 And here are the shorthorned critters that I promised in the title: We found some of the nicest Greater Shorthorned Lizards that I have seen so far. Actually the biggest one, nearly the size of the palm of my hand and silver gray, would have nothing to do with my camera and ran right into the spiniest  agave on the steepest part of the trail. But the two kids were perfect little hams, posing and making faces.

Posted by Margarethe Brummermann at 7:50 PM