August and July, our main monsoon months provide the most interesting insects related adventures, but...I am too busy to write any meaningful blog chapter right now: within three weeks I have been organizing the 4 day BugGuide Gathering 2013, had a 4 day art booth, presented a powerpoint show, and spent the evening black-lighting for the public at Southwest Wings in Sierra Vista, and now I am preparing for a 3 day bug tour with clients from California. On Sunday the highpoint: the Infestation Party at Pat Sullivan's 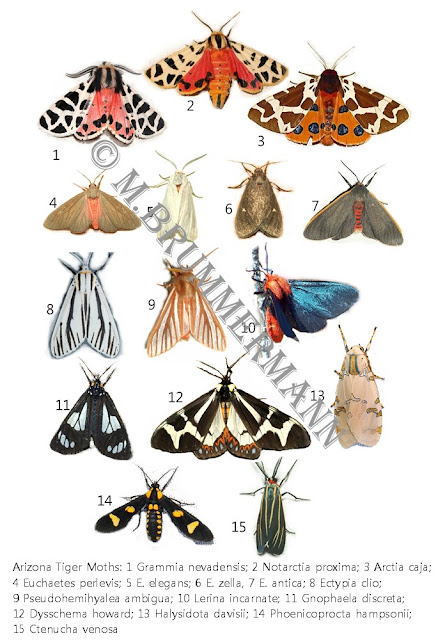 Our BugGuide Gathering was registered as an event of the National Moth week, and the species count was quite overwhelming. I am still editing hundreds of photos. Some of my upcoming events will also focus on moths. 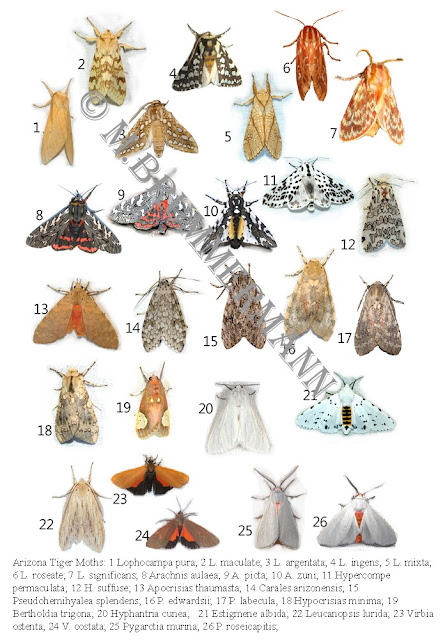 There are thousands of species, and most have no common names, so I would have to memorize the scientific ones. Even though I usually defend our use of those and often point out the disadvantages of local common names, I admit that I have a hard time remembering any but the most often used ones. So on site, I often only identify the family the moth belongs to even though I have a clear image of a former encounter in my mind - usually of the the bugguide page that I have posted the species to. My age, the unusual American-English pronunciation of Latin-and-Greek-based words, and my copy-and-paste habit when I'm writing all contribute to the problem. 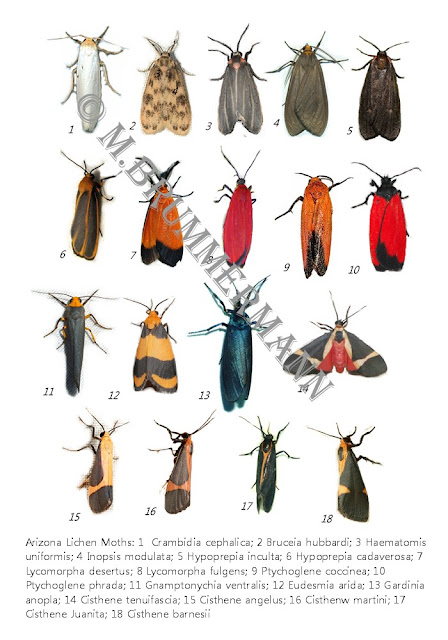 A good field guide would help, but there isn't a western one. So I have begun to make my own spick sheets. I am using the bugguide contributions for Arizona as my species list. After years of photographing at my black light, I have my own images of the majority of the species. For these three tables of Arctiinae I had to borrow 2 images each from Charles W. Melton and Randy Hardy, one each from Arlene Ripley, and Rich Hoyer. This spick sheet for myself can be considered fair use, but before I make any copies or other use of the pages I will have to ask them formally for their permission. Luckily all four great photographers and naturalists are good friends of mine.

Posted by Margarethe Brummermann at 2:12 PM