Some Batesian mimicry works well on me. Whenever I see a harmless (to me) mantispid in the exact colors of our most common paper wasp Polistes comanchus I am instictively careful of a powerful stinger - which the mantispid, a relative of ant lions,  just doesn't carry.

On Tuesday I took Caroline and Martin, two young German scientists, into the field to look for this paper wasp mimic, the Mantispid Climaciella brunnea. I had found one last week in Madera Canyon on Desert Broom during the day, but Peppersauce Canyon on the north side of the Catalina Mountains (Pinal County, Arizona) is the only place where I knew them to show up reliably at the black light.


We  really got one single specimen, but at least it was a different color morph than the one from Madera Canyon.  We also got many more interesting Neuropterans - other mantispids like Plega and Mantispa and many ant lions and an owlfly.

Peppersauce Canyon is one of my favorite collecting places and it lived up to my expectations. There were no other people except one Jeep driver slowly negotiating the rocky road, but lots of impressive insects. 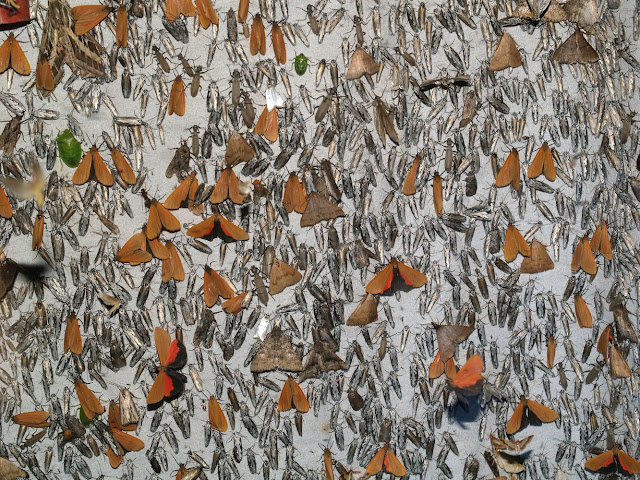 But as the night went on the sheet completely filled up with moths. Mostly hundreds of small Twirler Moths and the Tigermoth Virbia ostenta and too many blister beetles in the genus Epicauta. (they got Martin's ankle) 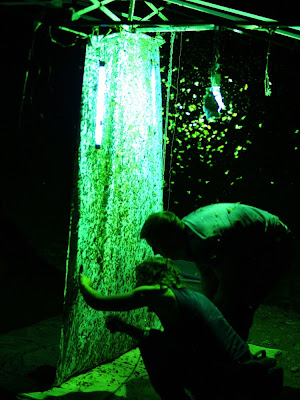 Caroline and Martine braved the onslaught and coughed through a mist of dislodged moth scales, but I left to rather investigate the surroundings.

There is an old oak tree in a clearing that is bleeding sweet fermenting juice from many scars. When we first arrived we saw so many yellow jackets on the bark that Caroline mistook the location for a nest entrance. Now the still warm night air seemed loaded with the heavy yeasty fragrance of a brewery. Ants, beetles, moths and roaches were competing for room at the source of the fermenting juice. Big longhorn beetles rustling and chewing, click beetles pushing their way in, carpenter ants forcing ants of a smaller more agile species out of the way.
Even small, delicate moths claimed their spots against the sturdier beetles, their eye-shine eerily flashing back to my head light.
After a while a larger Underwing moth joined the feast. During the day these moths sleep on the bark of trees where they are extremely hard to spot due to their camouflage pattern. While fighting for its place at the seeping tree juice the moth showed its colors, aggressively flashing its wings at beetles and roaches.

Then a huge dark shadow interrupted the beam of my flashlight. I thought a bat was swooping in to grab one of the intoxicated insects that showed neither fear nor caution. But the shadow descended - landed - and turned out to be a moth as well: a huge Black Witch. It was much larger than the big silk moths that we'd seen earlier. It's wingspan exceeded the length of my hand which is 6.5 inches.

This witch was very tattered and old - telling a story of narrow escapes from bats and birds and survived monsoon storms. These moths were long believed to be all border crossers from Mexico, but by now freshly emerged specimens are found far north of the border, proving that many Black Witches are legal -  born US citizens.

(A word to explain 'Nuns' of the title: when I was a kid in Germany, we called Underwing Moths 'Nonne' - 'nun' in English - though the official name for the genus is Ordensband (after the colorful sash worn by ordained Catholics). 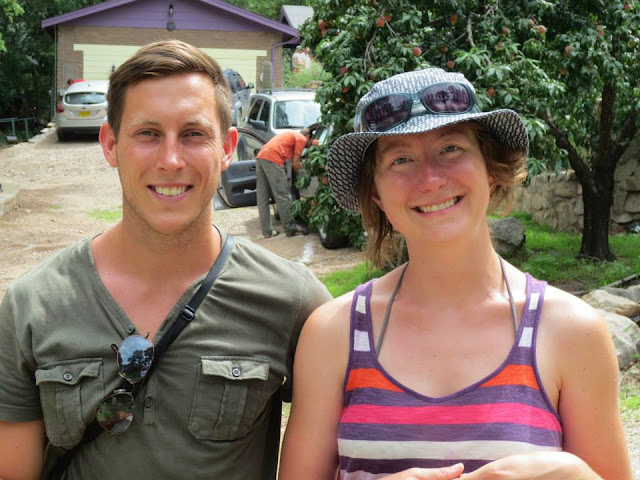 I think my friends from Berlin were as happy with their mantispid catch as I with my observations in the dark and mysterious forest.