This blog is about a watercolor that will be a belated birthday present. It's late because first the painting had to be painted and now it's delayed again by Hurricane Sandy because the recipient lives in Brooklyn.

It was commissioned by a friend of the little family whom I took on a beetle excursion this summer. The watercolor is meant as a lasting memento of that trip. The idea was an Arizona landscape with the mom and the two boys. As the people would be small, they would be recognizable more by their shape and body language than by their exactly portraied features. So the mom would be lovingly protective, the older boy growing more independent and adventerous at 7 and the younger, 5, still a little more clinging to mom (in fact, that only happened after we tired him out for three days plus jet lag).
There was a problem: The friend hadn't been part of the Arizona tour. To him Arizona is full of desert vistas with great saguaros. Somewhere in this wide landscape, he wanted the mother and the two kids depicted as they were searching for the elousive Dynastes granti.
Dynastes, however, does not like the desert heat, nor does this beetle live anywhere close to saguaros. I'm sure that the two bright kids are very awear of those ecological preferences and would not have accepted any artistic licence in that regard.
The brightly lit gas station on the Apache Reservation where we actually collected most of our beetles (on private property where we were allowed to hunt for bugs) was anything but picturesque. 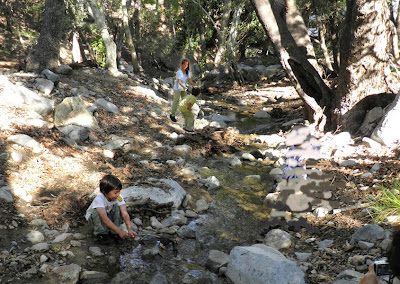 A prettier place that the kids really enjoyed was the creek behind the KuBo cabin in Madera Canyon, and Dynastes beetles can actually be found there. I took some nice reference photos, and I photoshopped the people into position. But while the jumble of rocks and bone-white sycamore trunks could have made a great, nearly abstract painting, it just seemed too monochrome and stark as a backdrop for a happy little scene with children. I may still develop it into a painting one day. 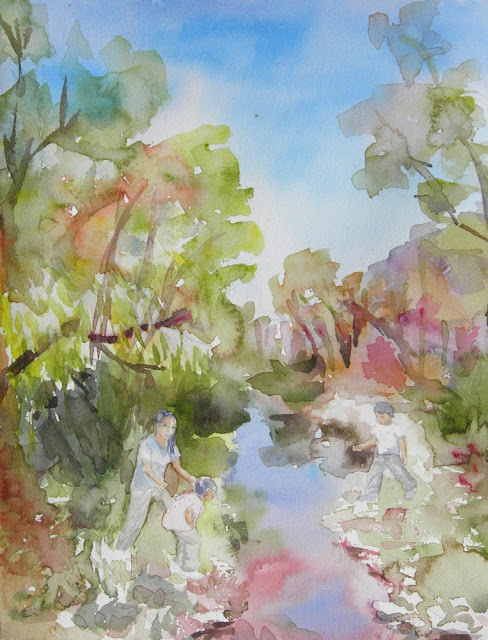 Where the canyon opens into the grassland, the light is friendlier and there is more color. I did a loose scetch to explore that option. But just at that time I recieved another email from my client, saying how much he liked one of my landscape paintings that featured saguaros and agaves backed by a rocky slope with lots of maroon and purple ...I realized then that my creek scene really didn' t have anything 'typically Arizonan' for him. 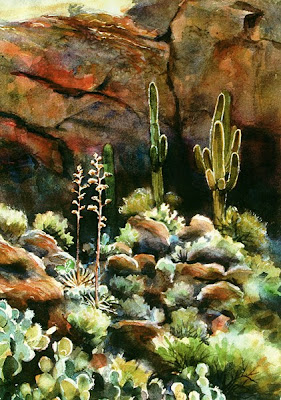 I had a few photos of our little group posing on an overlook over the majestic beauty of Salt River Canyon. But it had been rainig there, the kids were tired, and we never climbed down to a more intimate setting within the canyon (a new bridge makes access much more difficult than it used to be). 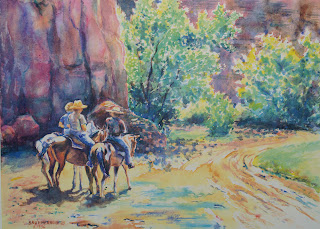 From Salt River Crossing the road zigzags up to the Colorado River Plateau. Here it is bordered by fields of wild sunflowers, and creeks and rivers cut deeply into red and pink sandstone. These riparian areas are the real home of the Dynastes beetles. Scars in the bark of young ash trees tell of adult beetles who visit the trees for their juice. Dynastes grubbs spend years of feeding and growing in the mulch under oaks and sycamores along the creeks. Since we didn't stop to take any photos there, I dug through my reference files of photos and plein air paintings that I've done over the years in that area. The one above is from 1994 from a horseback trip with an Apache rancher. 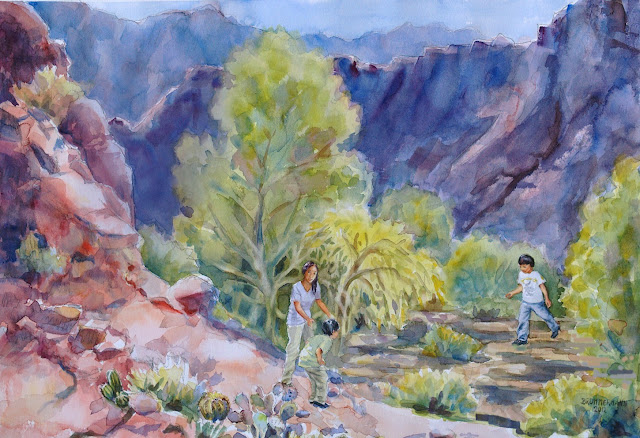 For the final version of  this commission I now combined mom, kids, beetle, red rocks, cacti, ash trees and the mountain ranges of the Salt River Canyon to compose a painting that has much more of a narrative than my current work usually does. Can you find the beetle? I hope my clients are going to like it!
Posted by Margarethe Brummermann at 1:13 PM