Around Halloween, spider webs are not just artificial decorations around human homes but a very obvious part of the natural world. Many big spiders seem to mature at a time when most insects are close to the end of their lives.  In autumn the spiders can easily harvest weakened bees, beetles and grasshoppers that might have been able to put up too much of a struggle in their prime.  This abundance of prey provides spiders with resources to survive the lean winter months. The term survival doesn't refer to the individual here. Many spiders mature and produce eggs in autumn, and it is often only the offspring that winters, be it in form of eggs or as freshly hatched spiderlings. But it certainly pays to send these off very well nourished.


Not all spider weavings are hunting implements. Lynx spiders do not trap their prey in webs. They get their name from their hunting methods that include stalking, jumping,  and sometimes lengthy pursuits of the prey and reminded observers of those of a big cat. Lynx Spiders are well equipped for this kind of hunting with strong legs and streamlined bodies.

Their translucent green color of Peucetia viridans (Green Lynx Spider) may be cryptic enough to hide them from their prey when they lay in ambush on green foliage.  But when they stalk their prey on flowers as they very often do, they seem very obvious at least to the human eye and far less camouflaged than the yellow and white crab spiders that are also hunting for flower visitors. 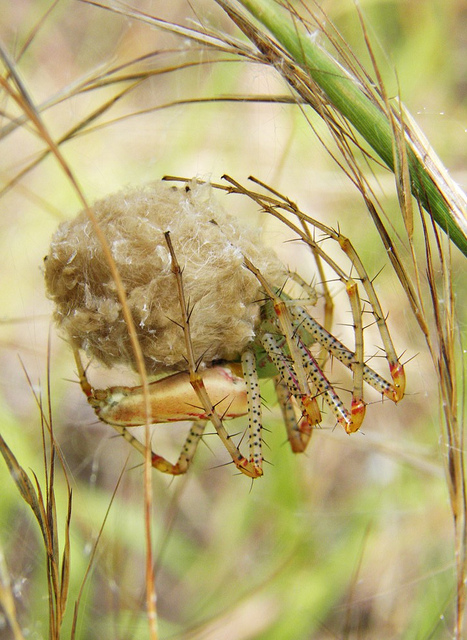 By late October the female lynx spiders reach maturity and are quite big, three fourth of an inch. They produce a ball of webbing that is about the size of a quarter and suspended from tall grasses or twigs of a mesquite or acacia. 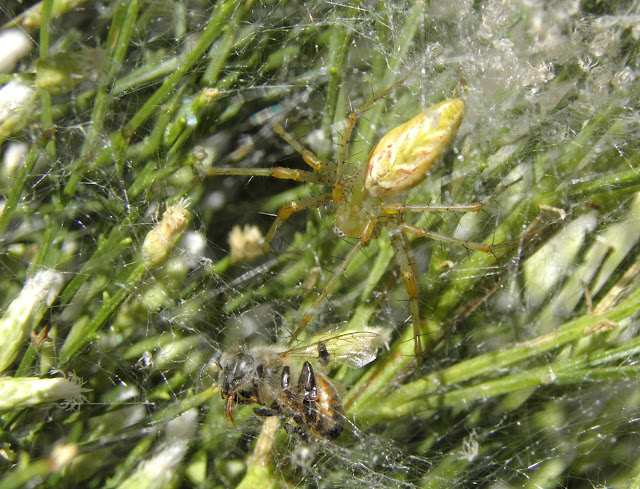 The ball is the egg sac of the spider that she guards carefully. It contains hundreds of eggs  Interestingly,  in this case there was also silk-wrapped prey, namely a honey bee, in this nesting area. I wonder whether the female, duty-bound to the nest as she is, is now routinely trapping insects for food, or whether she just opportunistically collects when something gets caught. Are any of the threads sticky? I think I have to research what is known about the phylogenesis of spider webs as traps. Maybe they did all evolve from nesting webs which are not uncommon among arthropods. 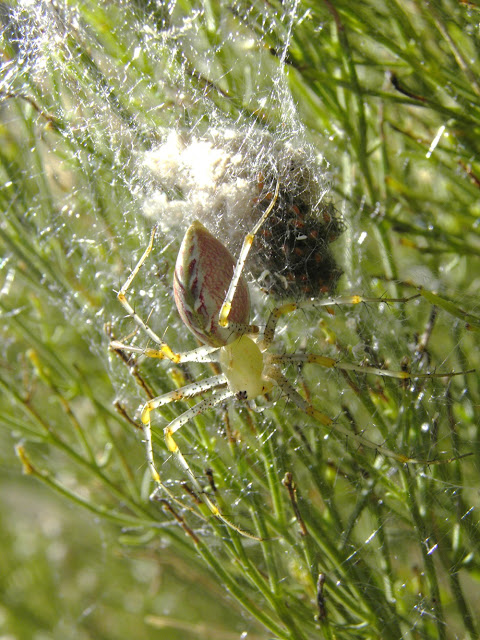 This spider is guarding her freshly hatched spiderlings in the mesquite grassland around Molino Basin. Bynow her egg sack is loosing its tightly woven  coherence. 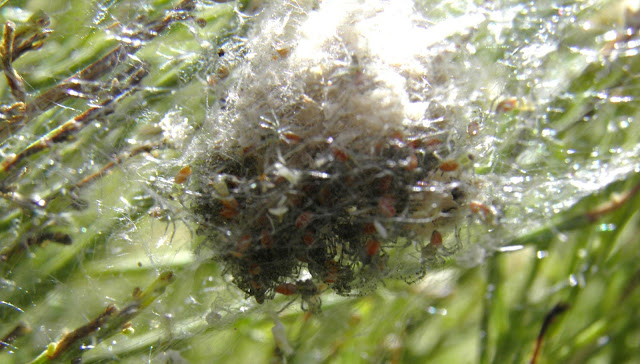 Hundreds of young spiders will soon be pouring out of this one egg sack. It looks as if they go through one molt before they move on, as many exuviae are still hanging in the nest. 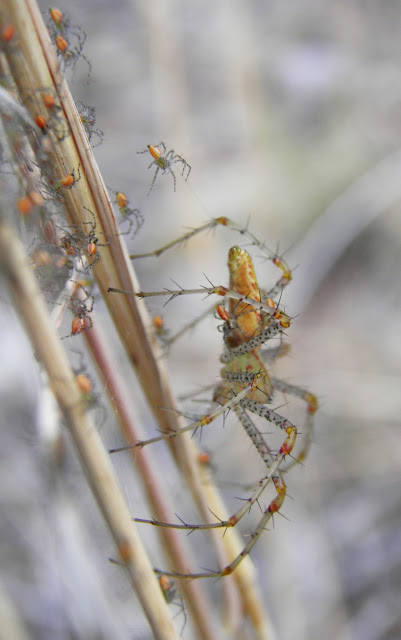 By mid November the kids have grown and the female has lost a lot of weight.


To find food and survive, the hatchlings will now have to disperse.  Their tiny legs are not a great means of locomotion, even though each has eight of them.


Instead, like dandelion seeds, many young spiders use aerial navigation:  Each spider climbs the top of a grass or a twig. Here the spider lifts up its abdomen and spins out a thread, long enough to buoy up the spider. A mild upward air current of a still autumn day would be ideal to carry the silk and the attached little spider far enough to begin her live on her own.  New research even suggests that earth electromagnetic fields  or more localized electromagmetic phenomena may help explain why aerial navigation can take place on windless days.


Threads of millions of little spider floating in the wind can form showers of silvery gossamer. If they all get caught in the same area they can form veils that cover soil and vegetation in magically sparkling layers. In Germany this time of the year is called Altweibersommer, 'old wives' summer for its flying silvery threads.

Posted by Margarethe Brummermann at 2:16 PM