The south side of the Santa Catalinas

I just finished a watercolor commission of the Catalina Mountains. My clients spend the winters in SaddleBrook and summers in Germany, isn't that a perfect arrangement? But one of them grew up in Tucson looking up at the ever-changing south side of the Catalinas, where morning glow is chased by cloud shadows or by color bleaching southern glare until the evening light models the relief again in strong warm contrasts. I know the view well, I lived for 7 years in the foothills at River Road. So I was going to capture some of that on a full sheet of watercolor paper, that's 21 in by 30 in.

Since I had all summer, I waited for a monsoon afternoon with dramatic clouds. One late August afternoon the sky looked perfect and I raced from my home on the west side of Interstate 10 to Campbell Ave. north of Sunrise. The clouds weren't so great there, but their shadows still brought the mountains alive and gave good contrast to Finger Rock - and I knew that that formation was important to my clients. 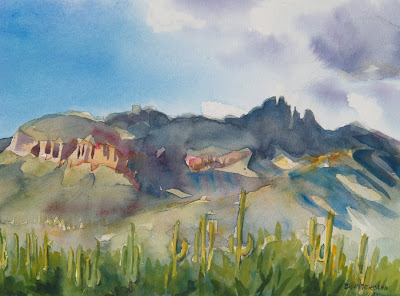 I took a series of photos and painted a quick plein air sketch on dry paper (10 by 14 in). There is no detail in it, but it captures colors and atmosphere that I wanted to reproduce on the big studio piece.  Luckily, as a painter I can just ignore any houses and developments that have sprung up in the foothills since my client was a child there.
I usually compose my landscape paintings with detailed foreground vegetation and some optical path leading the eye into the depth. But this time I had been asked to emphasize the mountain shape. Even the format of the painting was originally planned to be much more horizontal than my 'golden cut' shaped piece of paper. With this in mind I decided to just stick to the horizontal band of foothill vegetation, mostly saguaros, that I had actually seen while sketching. 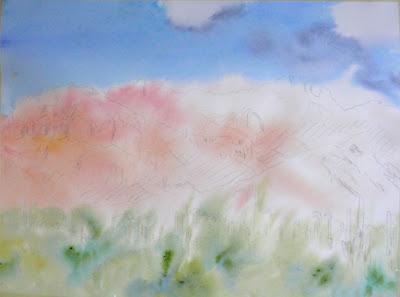 I like to combine wet in wet with wet on dry techniques in my watercolors.  So after penciling in very loose outlines I took a garden hose to my sheet of paper and soaked it, then slid it on a smooth wet board (no stretching). As soon as the wet sheen had disappeared I began flooding in blues for the sky. The sky is lightest closest to the horizon, so I had the board tilted slightly towards the top to make the pigment flow towards the zenith. As the drying progressed I laid down a warm pink orange wash for the mountain. This would give them warm glow of the afternoon light, and it would also tone down any distant green areas. It's tempting to use earth pigments for a landscape painting. But they lack the transparency that I need when I add several layers of paint and they tend to create mud. So I use only highly transparent, staining Thalos and Quinacridones. The disadvantage of these pigments: once on the paper they will stay put. Lifting and scrubbing is hardly possible.
At this point the drying paper had to be taped down with masking tape. It would still warp slightly, but that is the nature of an original watercolor. 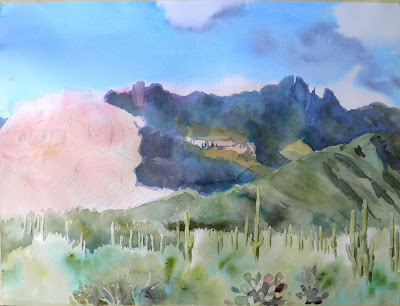 As I was going to define the characteristic skyline of the Catalinas next, I had to let the painting dry thoroughly first. Anyway, layering can only be done over a dry under-painting. The trick is then to not disturb the dry layers while still smoothly blending the new ones.
I tend to work all over the painting, establishing some darks while preserving my lightest lights. It helps me to get the midtones right without going back too often.
This painting would be dominated by cool colors, greens and blues. The warm colors of some bare, sun-exposed rock needed to serve as a counterbalance. Also, I fondly remember my first visit to Tucson, when my host was driving me north on Campbell in the afternoon and I asked him whether there was red rock like in Sedona up there...he said no, just  Alpine glow on granit...but the impression staid with me. 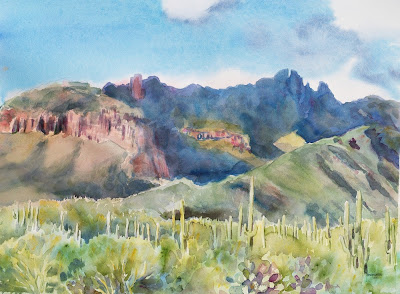 I had followed pretty much the shadow pattern that I saw in my reference photos, but at one point I realized that the shadows were giving a concave appearance to the mesa on the left that weakened  the impression of massiveness that I wanted to achieve. It's a myth that watercolors cannot be changed at all. The shadows were painted mostly in non-staining cobalt blue, so the could be partly lifted with the help of a toothbrush. Simultaneously a disruptive hard edge became a lost one (soft).

My clients liked their painting. They found that the careful layering of transparent colors produces a stained glass effect that is hard to show in these photographs, nearly an iridescence that changes the colors depending on the viewpoint. They also like the  high contrast that makes Finger Rock the slightly unusual center of intrest. I all my other paintings I soften the mountain edge to make the mountains recede. But the effect of the high contrast is not unrealistic. When the Souther Pacific railway hired painters to introduce tourists to western landscapes, their paintings were rejected by eastern art critiques for their lack of atmospheric perspective. The reason for this lack is of course Arizona's low humidity. It's a dry heat, even during the monsoon months.

I'll take part in an outdoor art show at St. Phillip's Plaza on October 20 and 21. Please come and visit!
Find more of my winter shows by clicking here

Posted by Margarethe Brummermann at 5:11 PM